10 Projects We’re Watching: Summer Edition
These groundbreaking projects - by Frank Gehry, Zaha Hadid, Herzog & de Meuron and others - redefine every building type, from the opera house and the art museum, to the military academy and the residential tower. 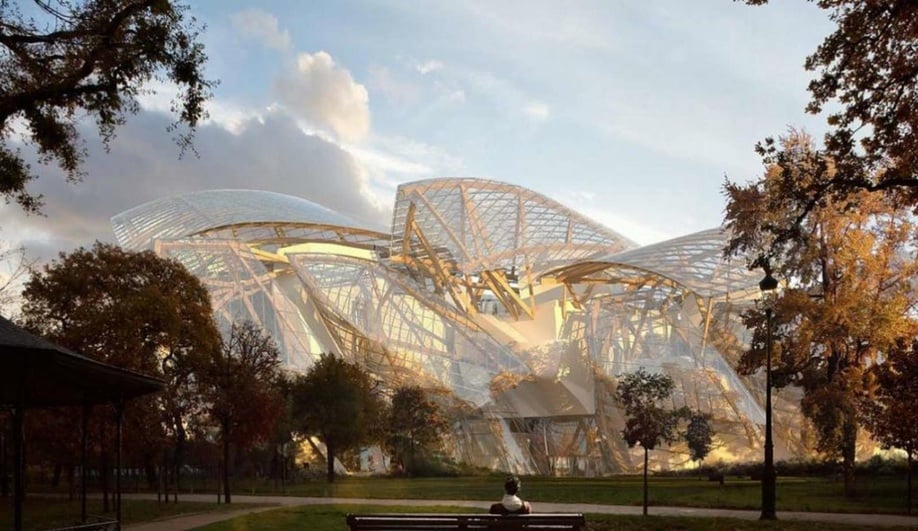 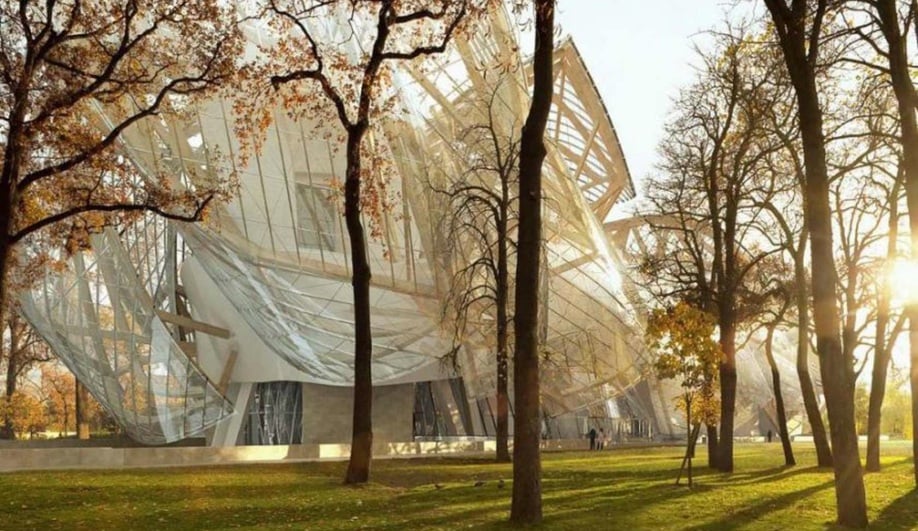 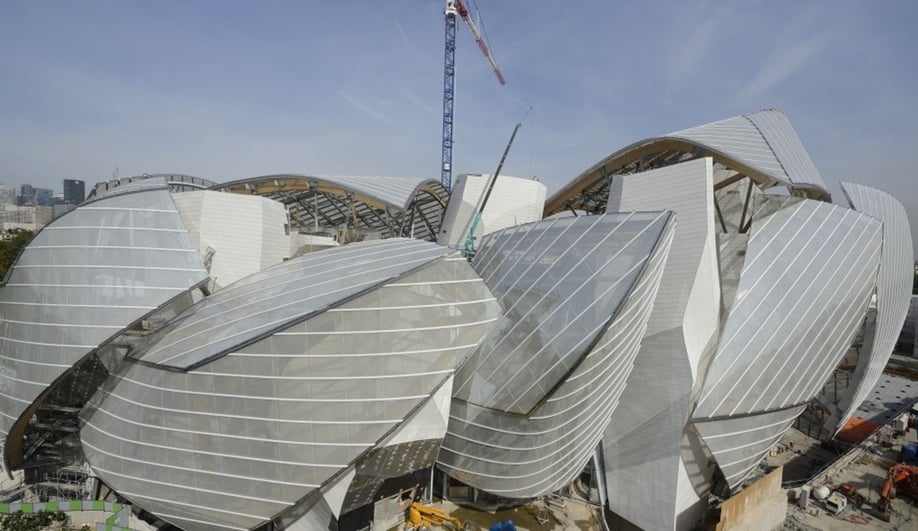 1 LVMH Museum by Gehry Partners
Location: Paris, France
Size: 11,705 square metres
Expected Completion: 2014
In 2001, Bernard Arnault – art lover and chairman of Moët Hennessy Louis Vuitton – met with Frank Gehry to discuss plans for a museum and cultural centre on the outskirts of Paris, in the 16th arrondissement’s Bois de Boulogne. Thirteen years and $143 million later, the 11,705-square-metre building is finally set to open this October. As with many of Gehry’s projects, the glass structure takes cues from nautical forms; here, these forms are further inspired by the transparent canopy of Paris’s iconic Grand Palais. The resulting 3,600 dramatic windblown sail-like shapes are each unique and originally hand-drawn by the Canadian architect himself. 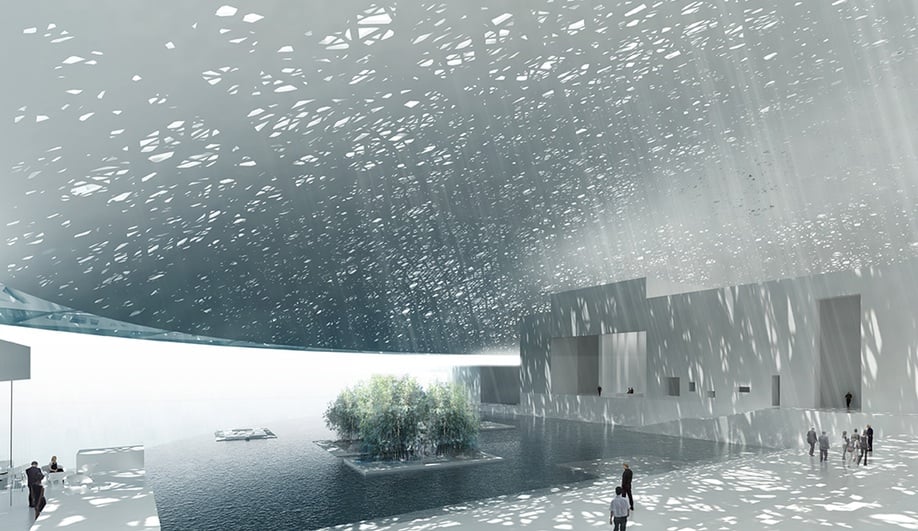 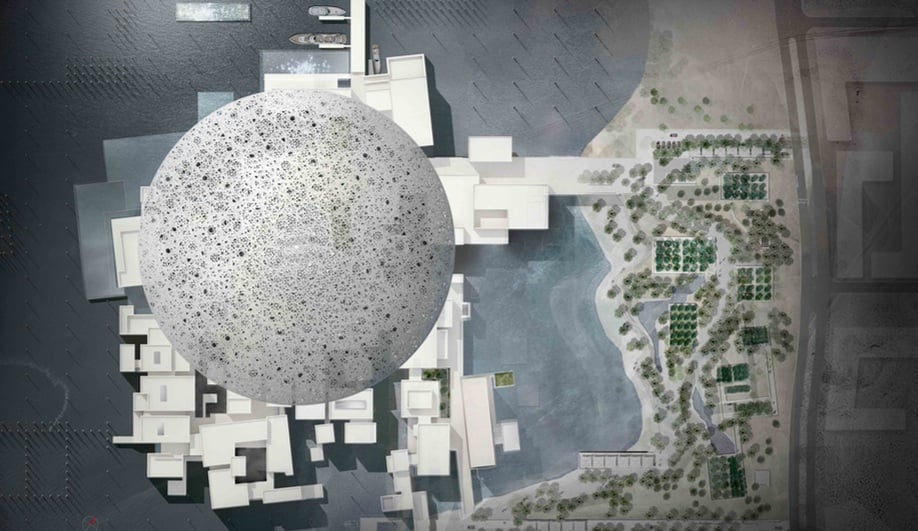 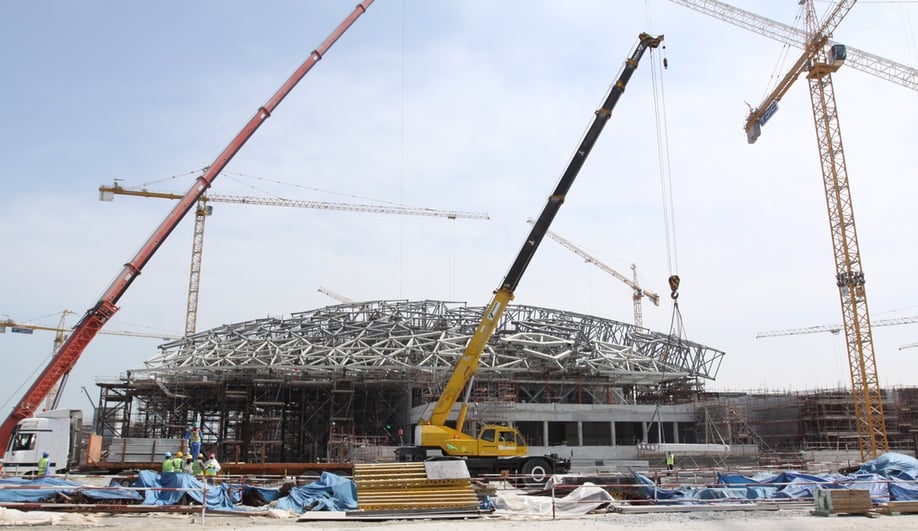 2 Louvre Abu Dhabi by Ateliers Jean Nouvel
Location: Saadiyat Island, Abu Dhabi
Size: 24,000 square metres
Expected Completion: 2014
Saadiyat Island is poised to become Abu Dhabi’s new cultural hub – not to mention a showcase for architectural excellence; currently in the works are a performing arts centre designed by Zaha Hadid, museums by Tadao Ando, Frank Gehry and Foster + Partners, and – if all goes according to the often-altered schedule – the first of these to open will be Jean Nouvel’s Louvre Abu Dhabi.

A massive dome (an iconic feature of Arabian architecture) is the building’s signature element, detailed with a pattern of apertures that admit shimmering shafts of light to the interior. Extending out over the waters of the Persian Gulf, the dome’s underside reflects the movement of the sea for further play of light and shadow. The building’s site is currently surrounded by 12-metre-high walls, but once construction is completed these will be removed to allow the site to slowly flood, and the museum, perched on a platform, will become an island unto itself. 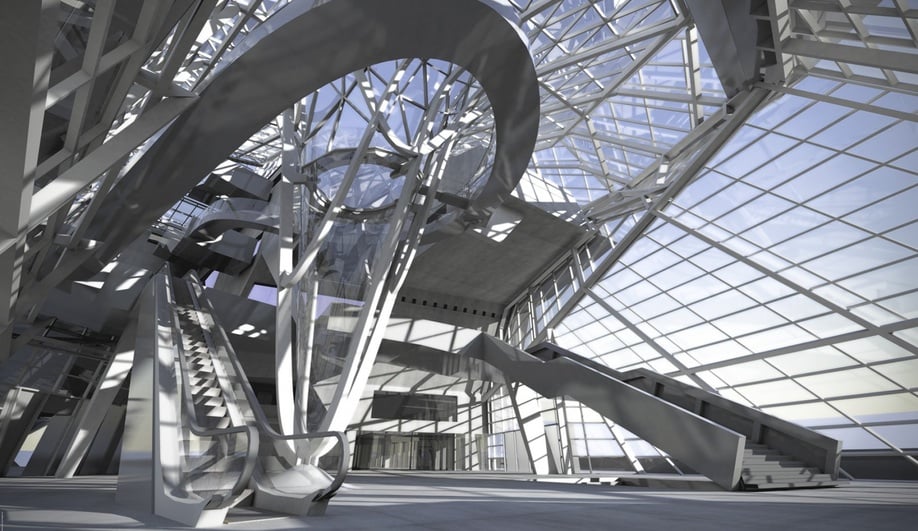 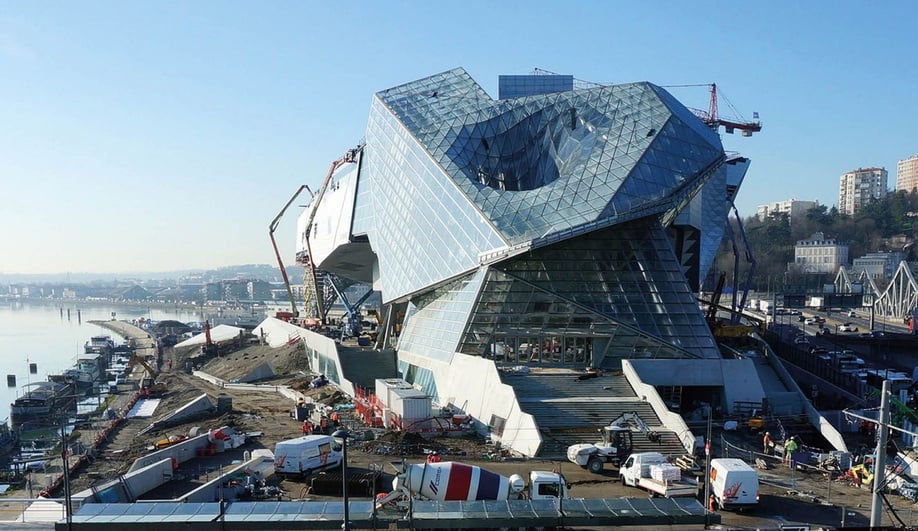 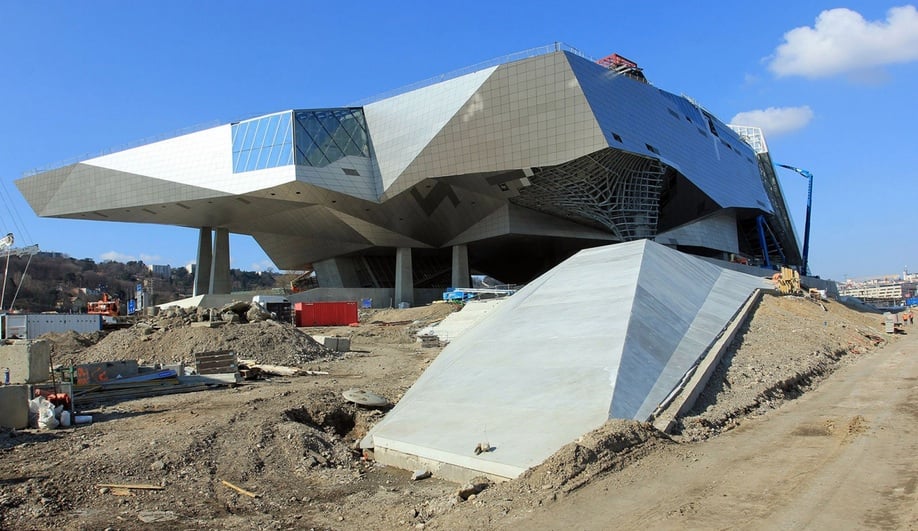 3 Musée des Confluences by Coop Himmelb(l)au
Location: Lyon, France
Size: 29,700 square metres
Expected Completion: 2014
A new home for the Earth Sciences collection of Lyon’s natural history museum, which first opened in 1772 and closed in 2007, this venue will include additional exhibits related to the natural sciences and anthropology. The location, at the juncture of the Rhône and the Saône rivers, inspired the building’s form – which joins two unique and contrasting volumes – and lends the museum its name. Facing the city to welcome visitors, the crystal is transparent and luminous. Hovering behind, the spaceship-like cloud section is stacked on pillars; admitting no daylight, this three-storey component creates a safe harbour for the sensitive materials on display in its 10 exhibit halls. 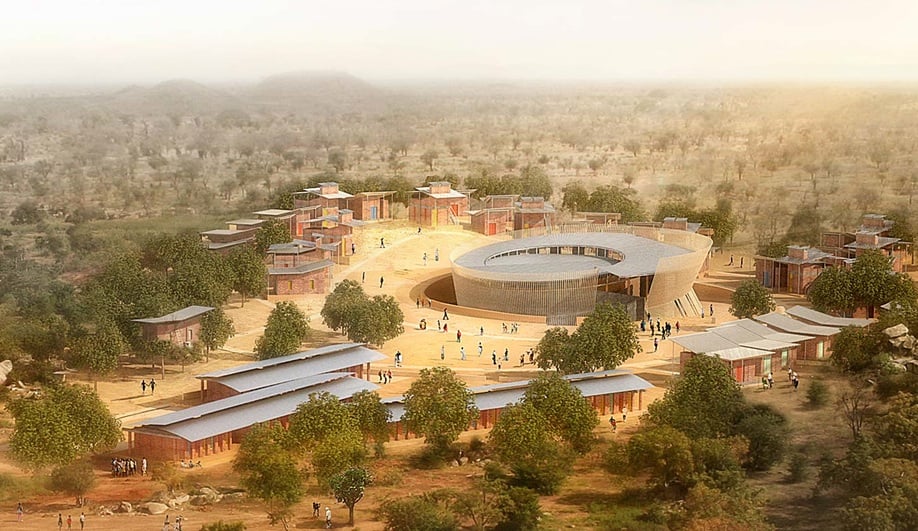 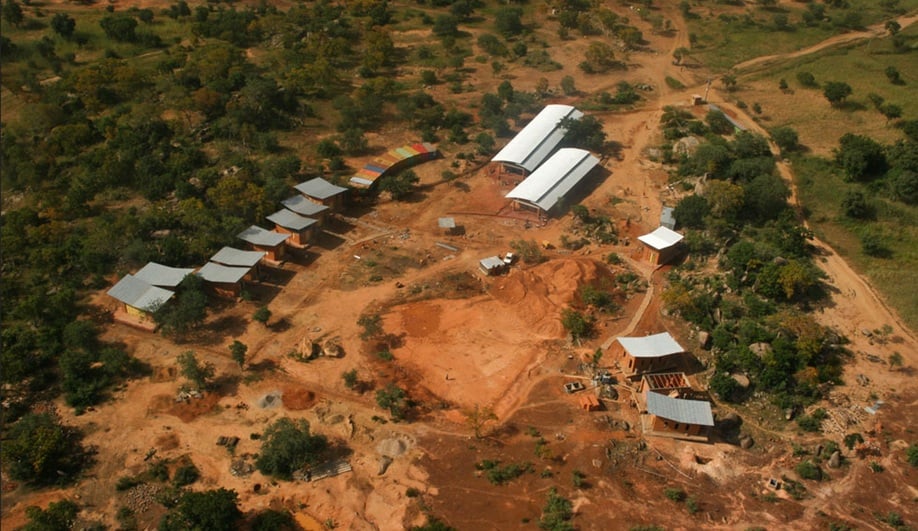 4 Opera Village by Kéré Architecture
Location: Laongo, Burkina Faso
Size: 14,230 square metres
Expected Completion: Under Construction
There’s a well-known story within opera circles about the most unlikely place to build an opera house – Burkino Faso, West Africa’s poorest country – and the man who dreamed of it, German filmmaker Christoph Schlingensief, who famously explored the morbid psyche of his country. Why an opera house in Burkino Faso? Schlingensief, who died in 2010 at the age of 49, believed that awakening cultural identity is necessary for growth, and he convinced Diébédo Francis Kéré, of Berlin’s Kéré Architecture, that Laongo, a village outside Burkino Faso’s capital, was the perfect location for such a mission.

More than 16 buildings of the Opera Village have already been realized, including a primary school for hundreds of children to receive an arts-heavy education, a medical centre and clusters of guest houses; all are fabricated out of clay, gum wood, cement bricks and sheet metal. But the opera theatre, the heart and soul of the 12-hectare site, remains incomplete. Plans are underway, however, to retrofit an enclosed stage and auditorium originally constructed and used only once in Germany. The renewed theatre will have a rotating stage with seats and interior walls covered in Burkinabé fabrics. Opera Village remains one of the most fascinating architectural endeavours on the planet. 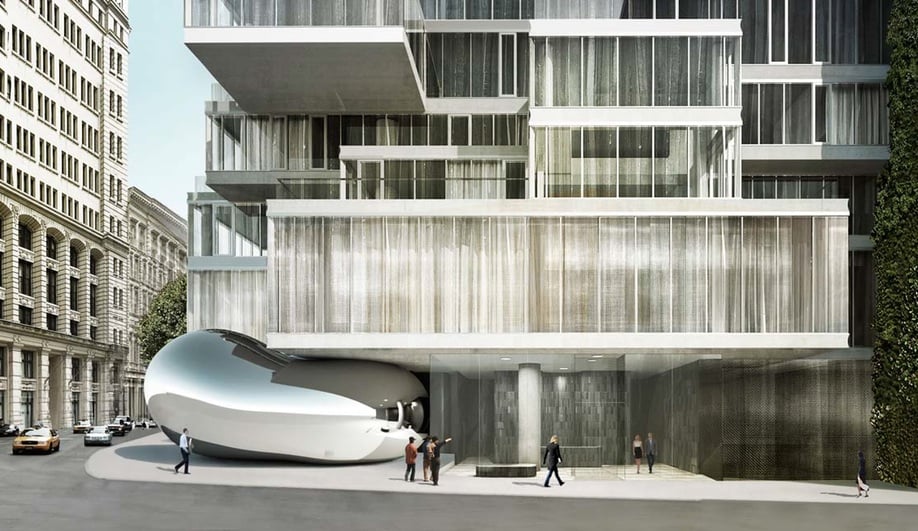 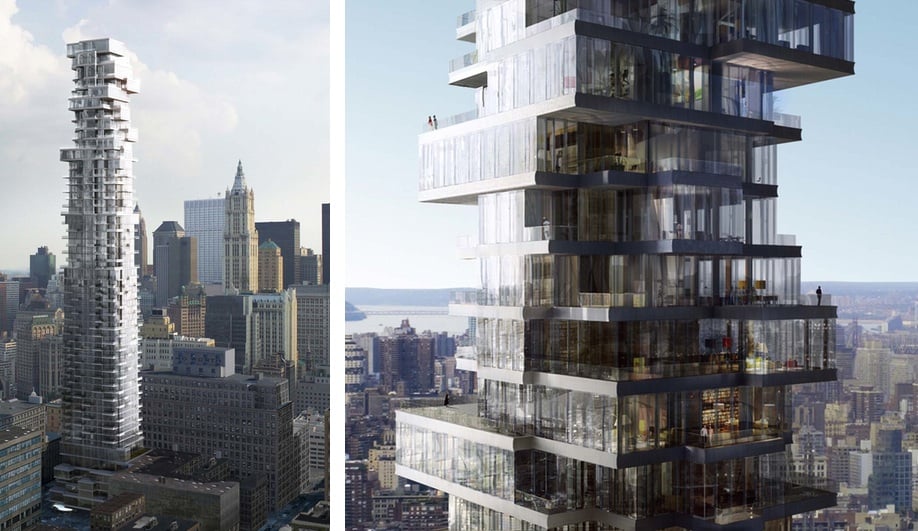 5 Global Landmark by Herzog & de Meuron
Location: New York City
Height: 250 metres
Expected Completion: 2015
New York by Gehry at 8 Spruce Street, the tallest residential tower in the Western Hemisphere at 265 metres, is currently Manhattan’s most sought-after address. Enter Herzog & de Meuron’s Global Landmark: a 60-storey, 250-metre-tall Jenga-like tower housing 155 lavish residences. Besides its location in a better neighbourhood – trendy TriBeCa rather than the Financial District – this building bests Gehry’s through its incorporation of a standout art piece. Anish Kapoor has been commissioned to create a mini version of his reflective Cloud Gate in Chicago’s Millennium Park (lovingly known as “the Bean”), which appears to playfully prop up the tower. The project’s luxurious amenities, all Herzog & de Meuron-designed, include an indoor/outdoor theatre, a tot room for kids, and a “sky estuary,” with a 23-metre-long infinity lap pool. 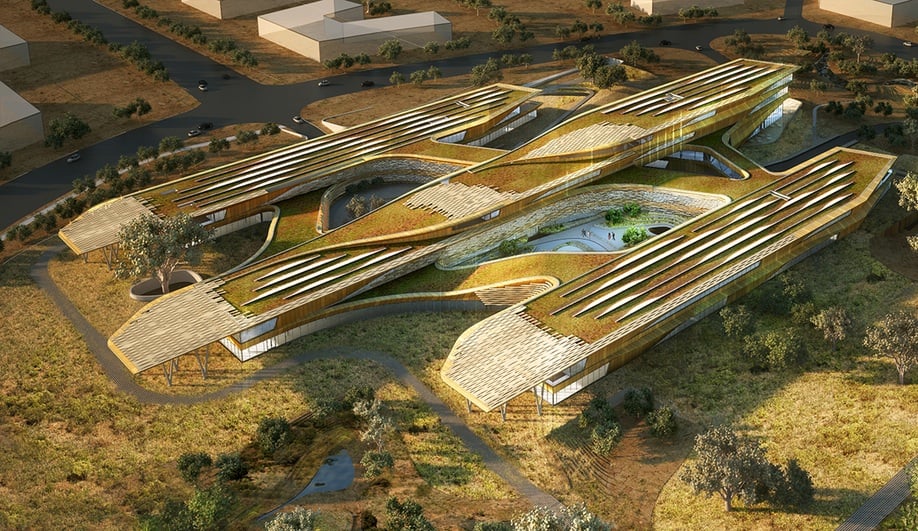 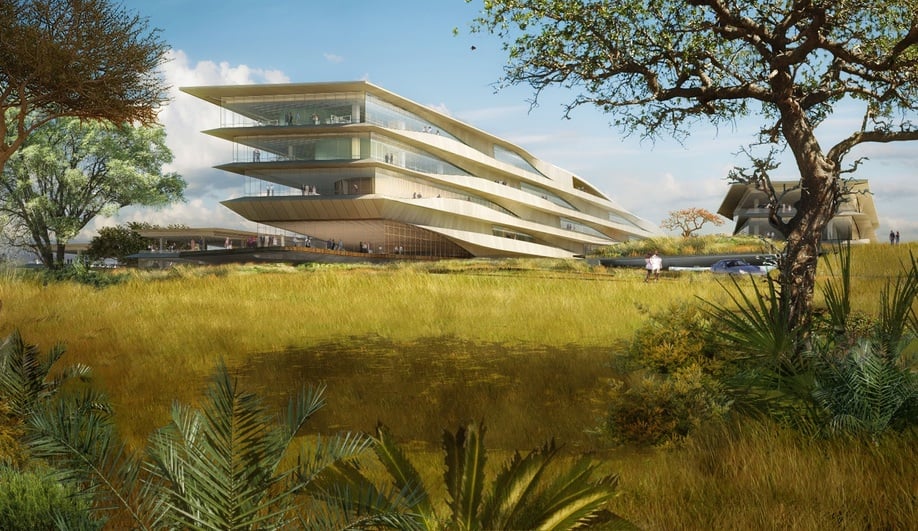 6 Botswana Innovation Hub by SHoP Architects
Location: Gaborone, Botswana
Size: 28,800 square metres
Expected Completion: 2015
SHoP Architecture, which Fast Company recently named one of North America’s most innovative firms, has been on a success streak for some time now, with dazzling commissions (including 111 West 57th Street, the tallest and skinniest residential tower in the world), and big awards (their Barclay’s Center in Brooklyn, New York, was a finalist in last year’s AZ Awards). But one of their most ambitious – not to mention remote – enterprises is the BIH Science and Technology Park, on a 57-hectare site in Gaborone, which aims to turn Botswana’s capital city into an international digital information hub. The massive campus is lean and low-lying, with volumes linked via bridges, and an “energy blanket” roofscape that represents the project’s overall mission to be a model of superior sustainable design and engineering. 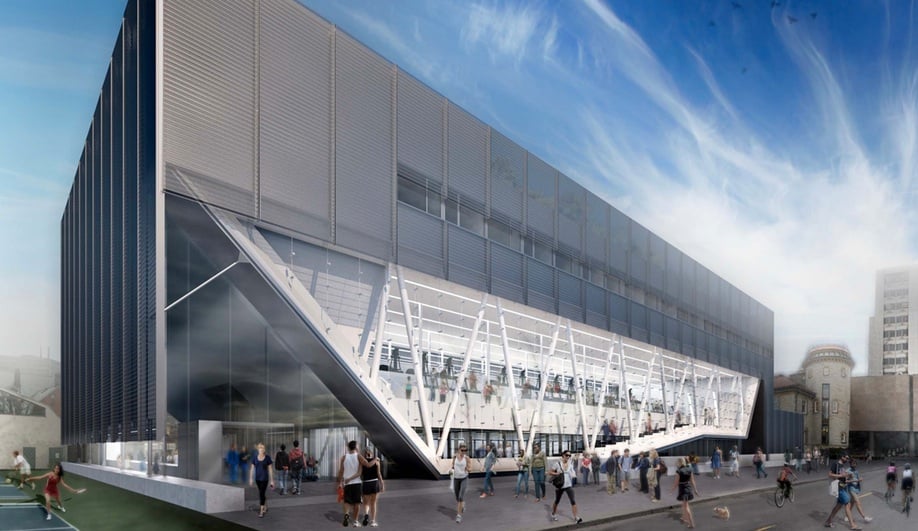 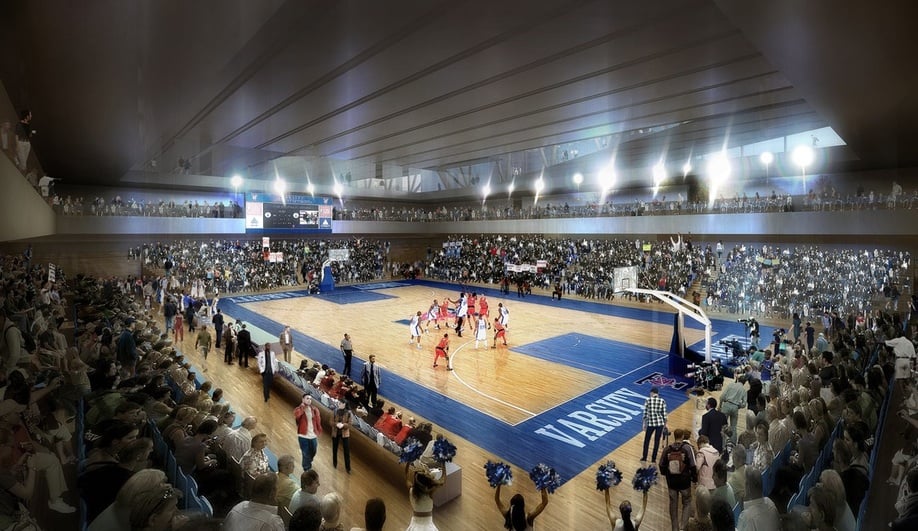 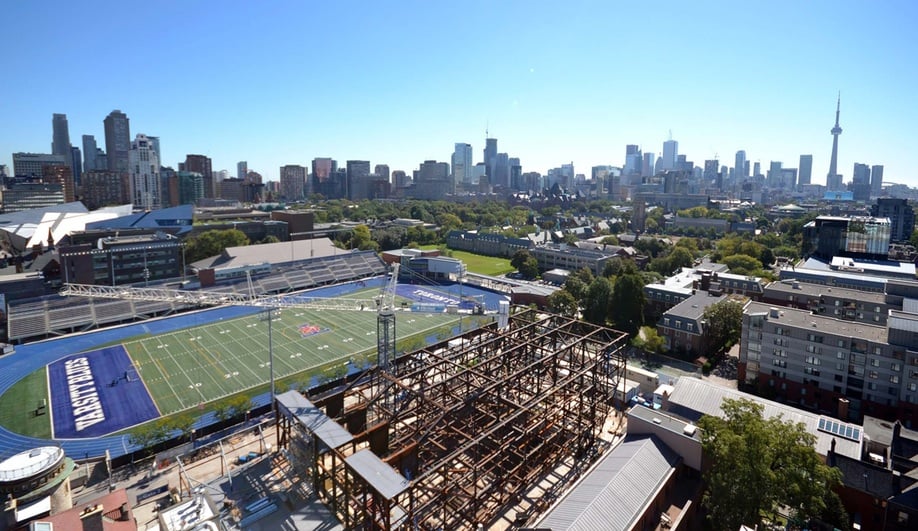 7 Goldring Centre for High Performance Sport by Patkau Architects and MacLennan Jaunkalns Miller Architects
Location: Toronto, Ontario
Size: 13,000 square metres
Expected Completion: 2015
Vancouver’s Patkau and Toronto’s MJMA know a thing or two about sports facilities, big and small: Patkau created the beautiful curved-plywood huts on Winnipeg’s Assiniboine River a few years back, and MJMA is the firm behind Regent Park Toronto’s phenomenal new Aquatic Centre (celebrated with a People’s Choice accolade at the 2014 AZ Awards). Next to the University of Toronto’s much-loved Varsity Stadium, Goldring Centre combines teaching facilities and labs with recreational spaces, like a 2,000-seat field house for varsity basketball and volleyball. To fit the building into the dense downtown core, the architects designed it as a long and lean infill project, with a “heroic steel frame” poised over a subterranean excavation. The structure’s lower half animates the street-level experience, allowing passersby to see inside to a set of stairs that leads to the lounges beyond the dramatic V-shaped columns. 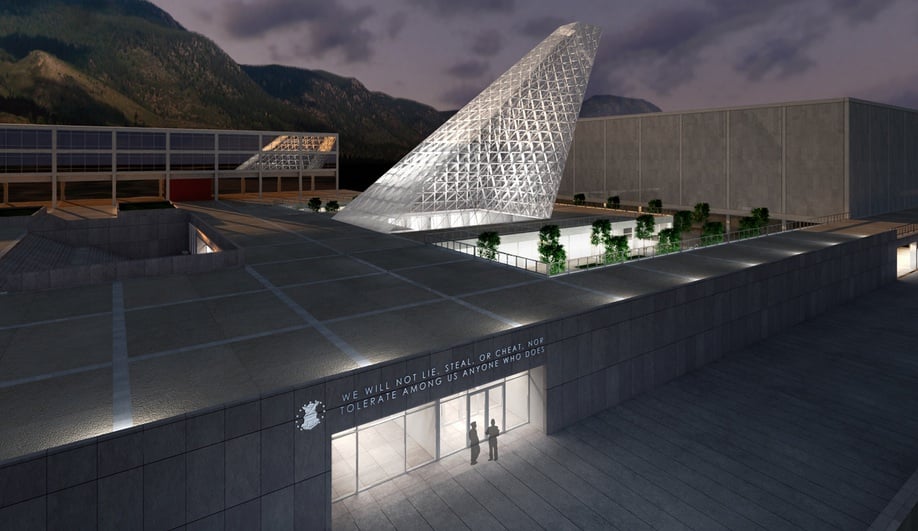 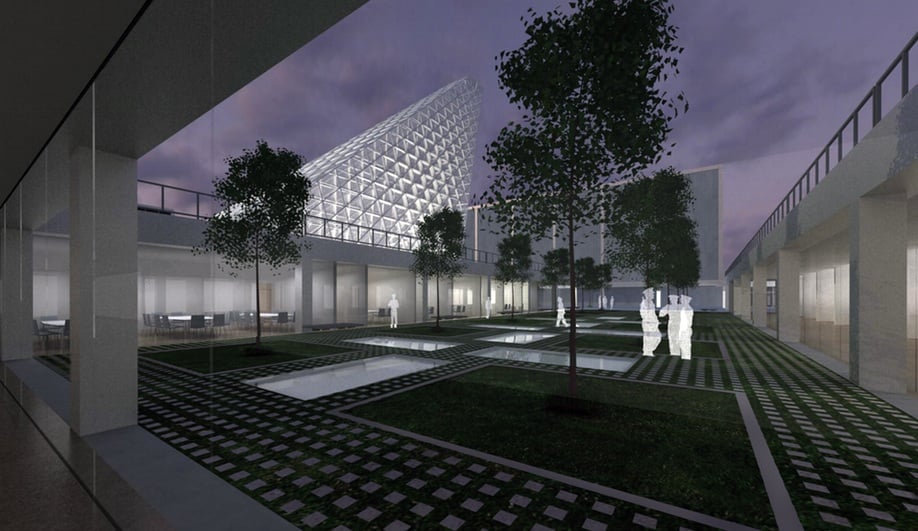 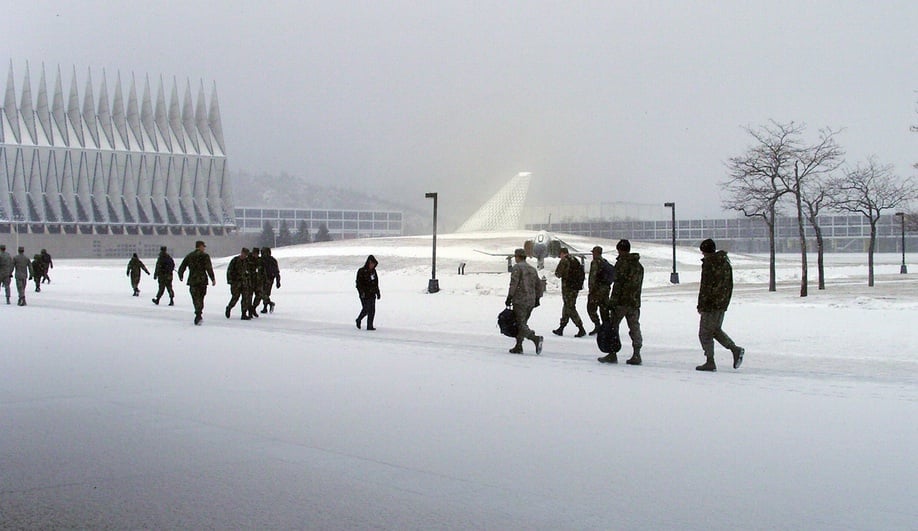 8 US Air Force Academy Center for Character & Leadership Development by Skidmore, Owings & Merrill
Location: Colorado Springs, Colorado
Size: 4,300 square metres
Expected Completion: 2014
After 60 years, SOM returns to one of its most significant projects – the Air Force Academy in Colorado – to add a “reason-based” icon to balance the chapel at the spiritual core of the institution. A cross between a pyramid and an aircraft tailfin, this 32-metre-tall skylight slants in alignment with the North Star, which can be seen through the oculus. And if you happen to be in the building below, you might already be looking skyward for help: according to the architects, “the symbolic heart of CCLD is the Honor Board Room,” an aluminum-clad area with a marble dais and table smack in the middle, “where potential violations of the Cadet Honor Code are investigated.”

The subterranean building also houses a much less intimidating forum, with terraced levels and glazed break-out spaces, and features classrooms and offices placed around the courtyards. The new structure operates with the efficiency of a high-tech air battalion, with PV panels, radiant heating and cooling and a whole host of other green measures working in tandem. 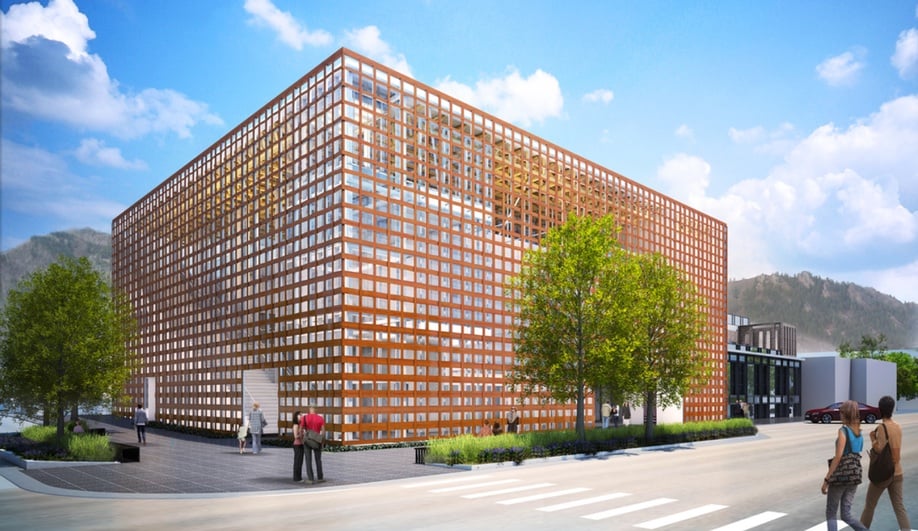 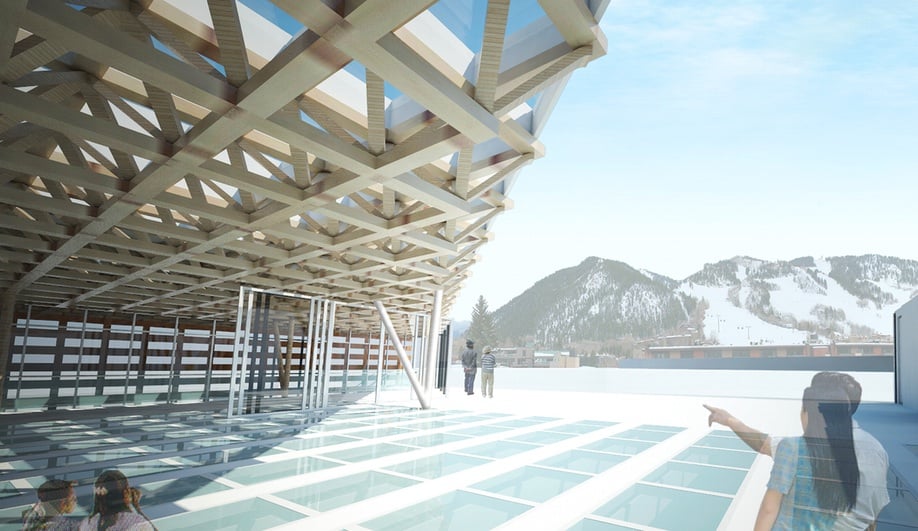 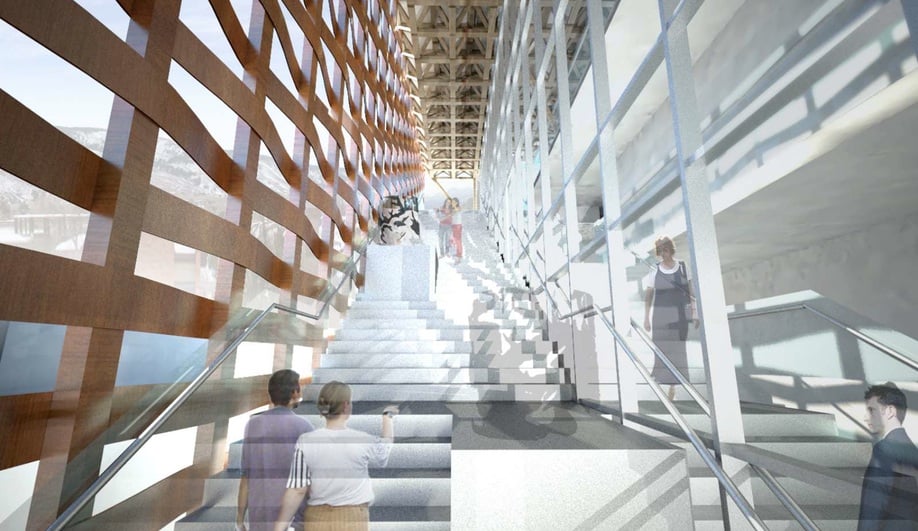 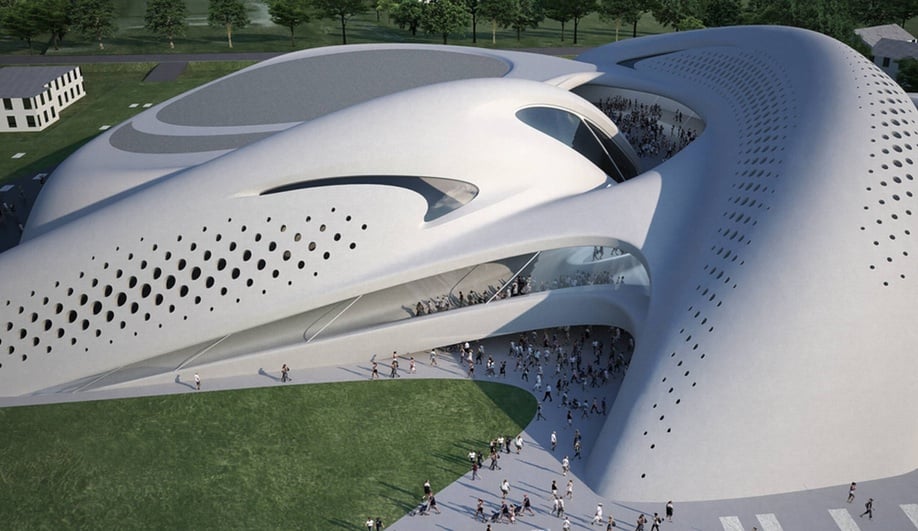 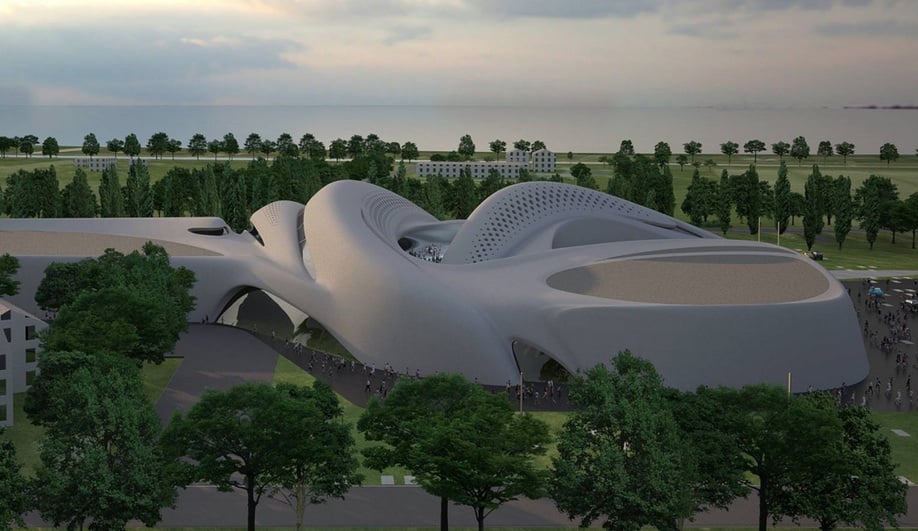 10 Jesolo Magica by Zaha Hadid Architects
Location: Jesolo, Italy
Size: 40,000 square metres
Expected Completion: 2016
The scale and swooping lines that define this seaside retail centre seem almost too fantastic to be real, but if anyone can pull it off, it’s Zaha Hadid. Her projects – like the London Aquatics Centre and Heydar Aliyev Centre in Baku, Azerbaijan – have already pushed this type of sinuous facade into entirely new territory. Arrayed like petals and joined by arching concourses, the retail buildings of the Jesolo Magica surround a central space housing a covered square and gallery.