10 Projects We’re Watching in 2016
For the start of the new year, we've rounded up 10 hotly anticipated architectural masterpieces - underway or opening in the coming months - that we're following with bated breath. 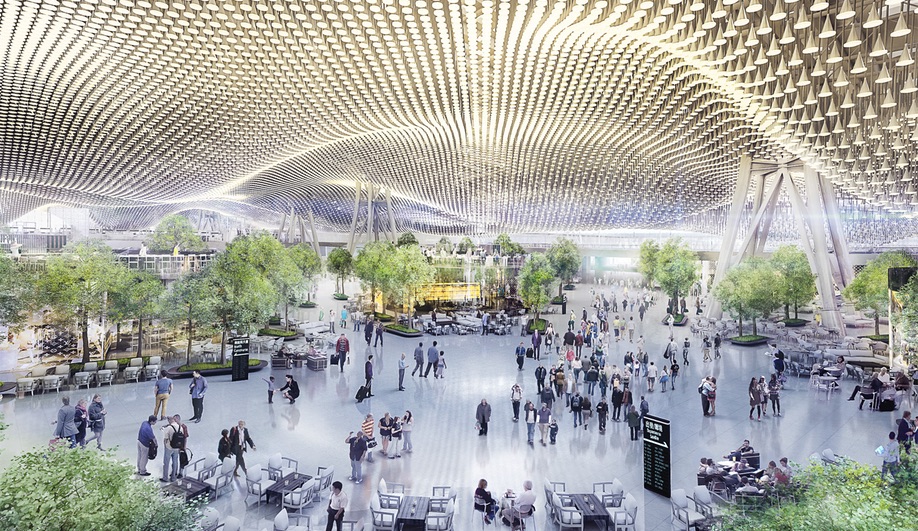 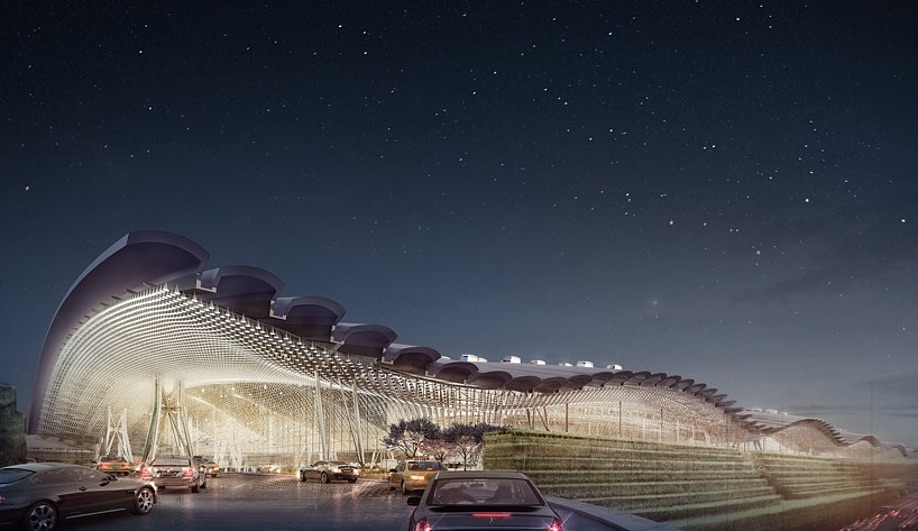 1 Taiwan Taoyuan International Airport by Rogers Stirk Harbour + Partners
In November, it was announced that British firm Rogers Stirk Harbour + Partners had won the competition to design Terminal 3 at Taiwan’s Taoyuan Airport. Triumphing over shortlist finalists Foster + Partners and UNStudio, RSHP’s bid swayed the jury with its “innovative planning and design,” which was influenced by Taiwan’s landscape and surrounding seas. With an anticipated cost of $2 billion, the 640,000-square-metre structure will accommodate 45 million passengers a year, and include a terminal building, boarding gates, concourses, a multi-purpose building and transport infrastructure.

With two other airport terminals under their belt (Heathrow’s Terminal 5 and Madrid Barajas Terminal 4), RSHP combined the best of both in their latest endeavour: London’s single-span roof and Madrid’s open interiors and undulating ceiling. In Taoyuan, thousands of cone-shaped lights will be suspended overhead in a rolling arrangement, creating differing ceiling heights with the flexibility to be modified to suit future needs. 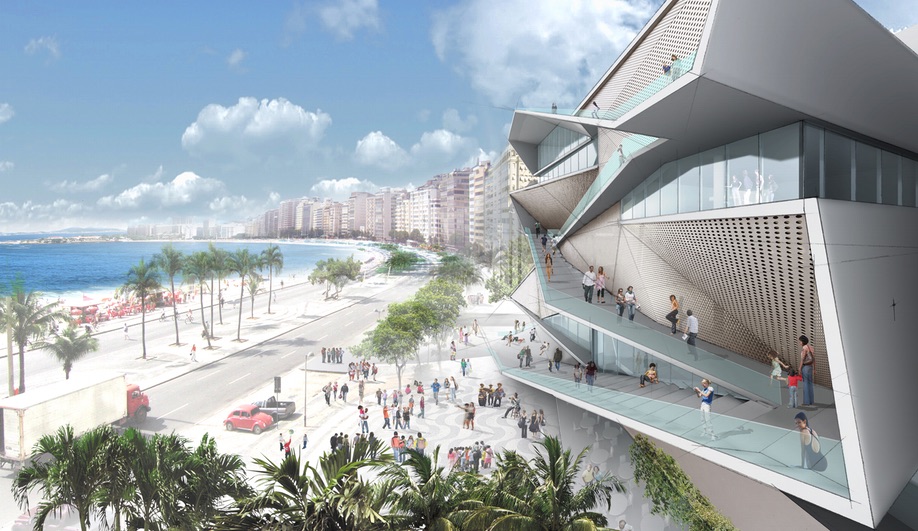 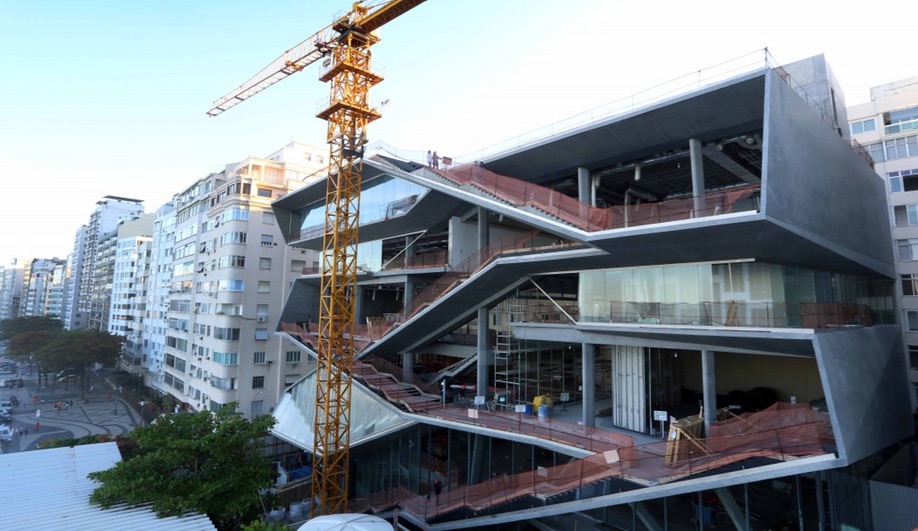 2 Museum of Image and Sound by Diller Scofidio + Renfro, in Rio de Janeiro
Although the exact timeline is still being confirmed, it’s hoped that this cultural institution will re-open its doors before the city hosts the Olympic Games this summer – nearly seven years after Diller Scofidio + Renfro won the commission in an international competition. The building, which replaces the original 1965 museum, houses a collection of over 350,000 films, videos, records, photographs, works of graphic design and more. Its form takes inspiration from its location on the famous Copacabana Beach: imagined as a vertical extension of the beach’s promenade – designed by landscape architect Roberto Burle Marx – the graphic, zigzagging facade incorporates a flowing series of balconies which mimic the coastline and mountains beyond. DSR has designed a perforated brise soleil to withhold views of the breathtaking scenery throughout much of the journey through the exhibition spaces – until strategic moments when panoramic vistas are revealed with maximum impact. 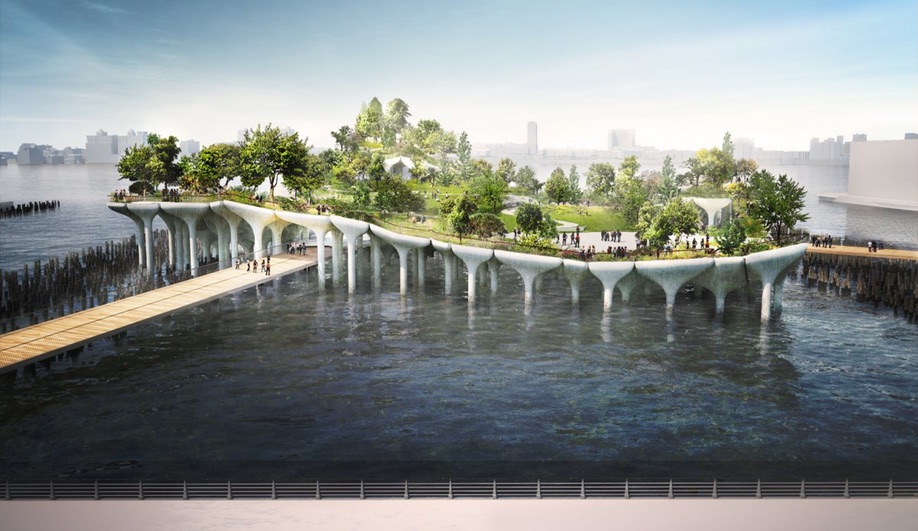 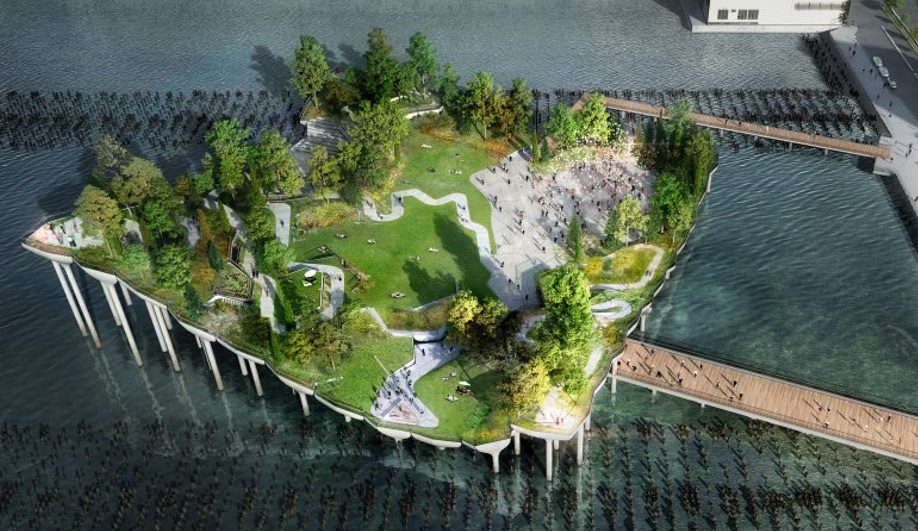 3 Pier55 by Heatherwick Studios, in Manhattan
While plans to build a garden-covered bridge in London have been thwarted by controversies and delays, Heatherwick Studios’ other magical park – in Manhattan’s lower west side – is set to begin construction in the coming months. The park, known simply as Pier55, is composed of an undulating cluster of 300 mushroom-shaped concrete columns that emerge out of Hudson River, 57 metres off shore. The final elevated platform will provide the base for a full hectare of rolling landscape, including three live performance amphitheatres. Billionaire Barry Diller and his wife, fashion designer Diane von Furstenberg, are the key backers of the US$130 million project’s construction; operations and upkeep will be funded publicly. We’re betting the project will be a riverside attraction even as it is being built, and when it opens to the public in 2019, it might even be more popular than the High Line. 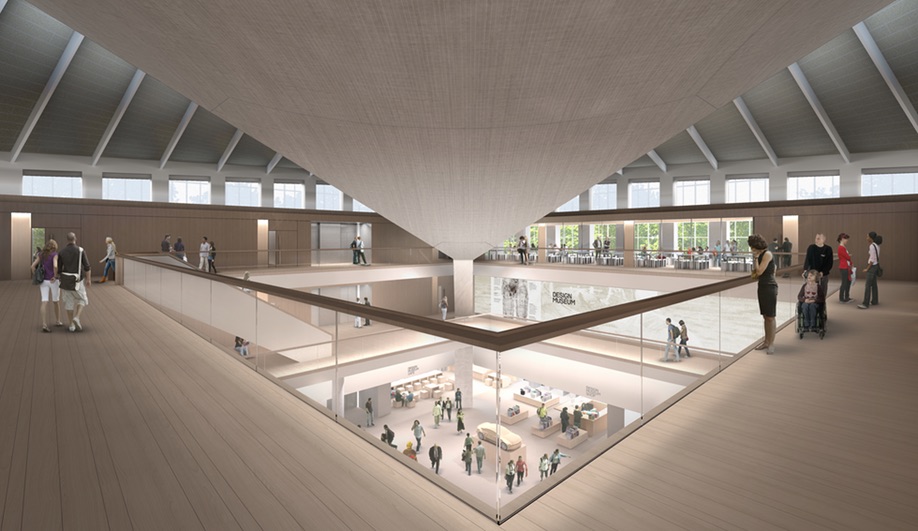 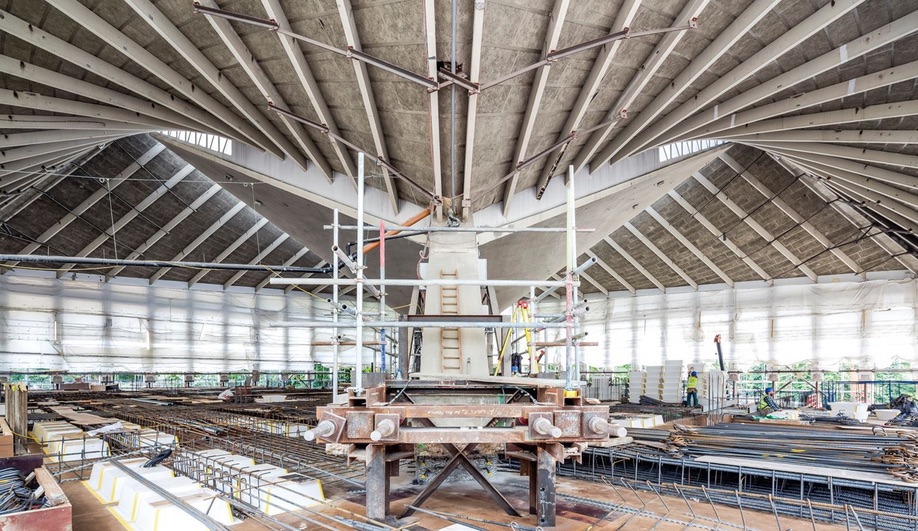 4 Design Museum by John Pawson, in London
In 2010, the Design Museum announced its new home in Kensington would be designed by minimalist extraordinaire John Pawson. The revered architect’s vision for the project, housed in the former Commonwealth Institute, might be his most radical yet, with a roofline that recalls a pitched circus tent and glass exterior cladding in a cloudy shade of blue – both gestures that seem like marked breaks from Pawson’s usual preference for rigid symmetry and only minor hue variations in shades of white.

Inside, the space will be accessed via paths that circulate around a square atrium, where the pitched roof makes its ascent. When the museum officially opens later this year, the renovations will give curators three times more space to work with, providing room for the permanent collection, two temporary exhibition spaces, a library and an archive. There will also be a café, a restaurant, two shops and a 192-seat auditorium. As for the old Design Museum along the Thames, Zaha Hadid bought the building and plans to make it her new office. 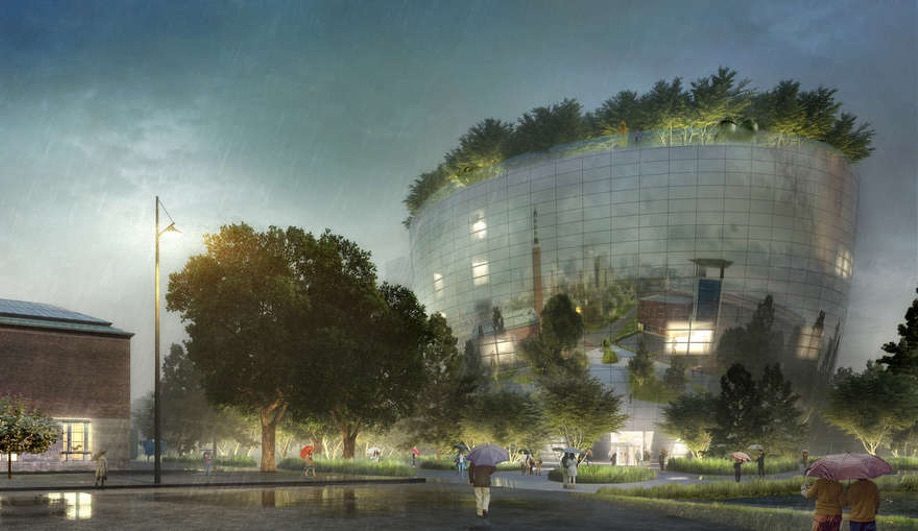 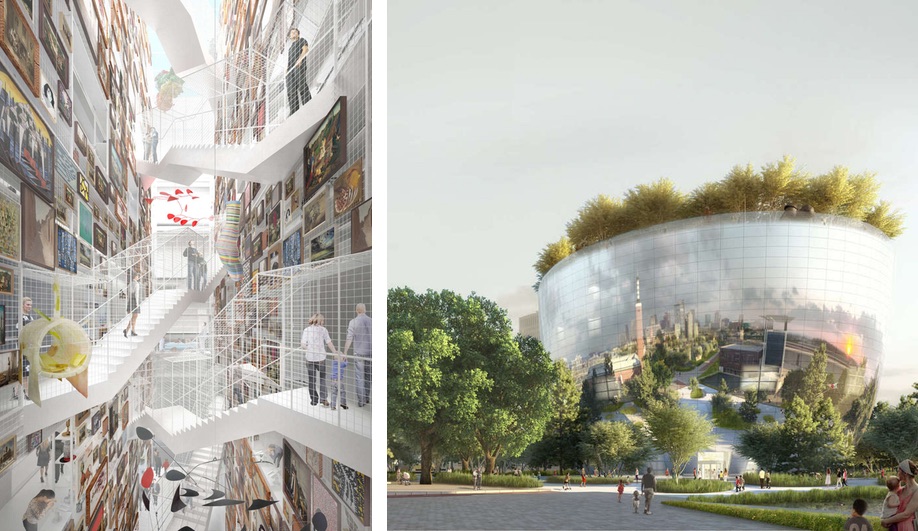 5 Art Depot of Museum Boijmans Van Beuningen by MVRDV, in Rotterdam, the Netherlands
In its home city, where it created the colourful, horseshoe-shaped Markthal (one of our favourite projects of 2014), MVRDV will inaugurate the Collection Building. Designed for the Museum Boijmans Van Beuningen, the De Verre Bergen Foundation and the Municipality of Rotterdam, this art depot houses both city- and private-owned works. The 15,000-square-metre, tree-topped vase (its rounded profile and reflective surface designed to minimize its footprint and amplify its verdant surroundings on the northern edge of the OMA-designed Museumpark) will be partially open to members of the public; 60 per cent of it will be turned over to sealed-off rooms, including sky boxes where private collectors can store their acquisitions. Nevertheless, when it opens in 2016, you will be able to zigzag your way from the lobby café up through three floors of exhibition spaces to the tree-lined rooftop, which will house another architectural feat: Futuro, a UFO-shaped prefab house by Finnish architect Matti Suuronen. 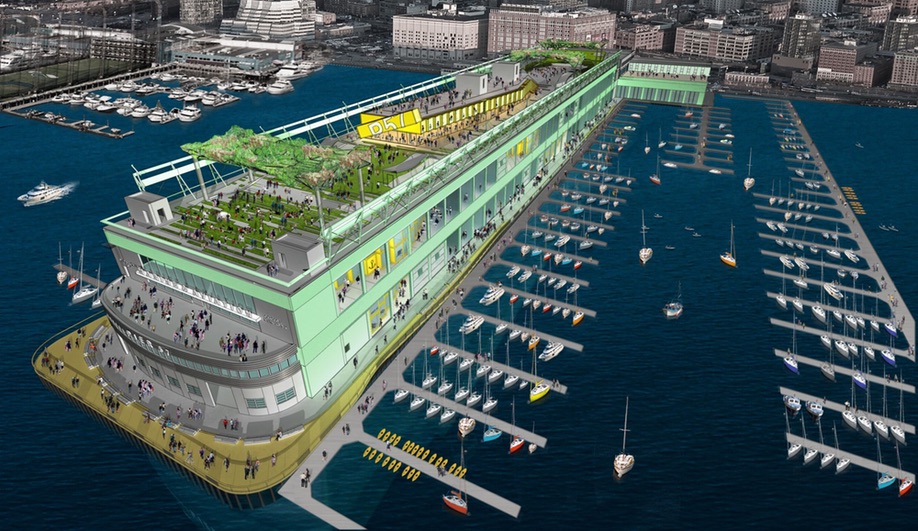 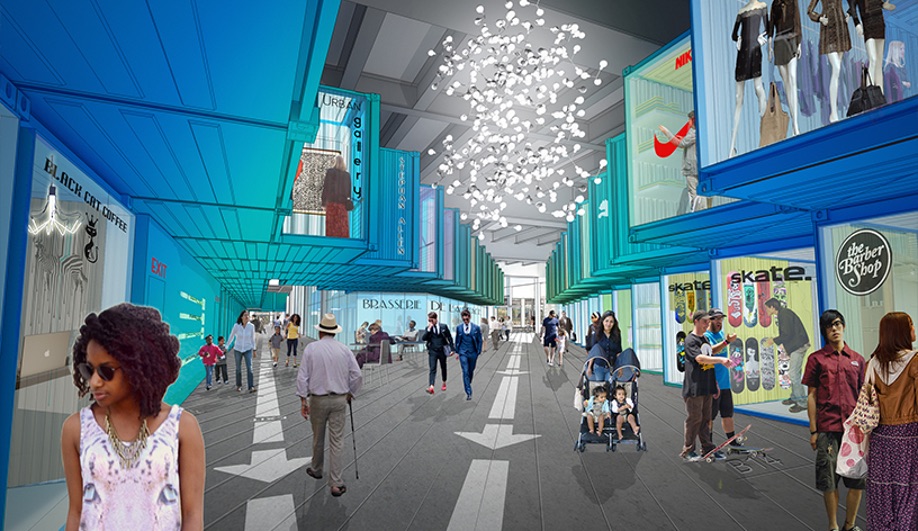 6 SuperPier by Youngwoo & Associates and LOT-EK, in Manhattan
Construction on New York’s SuperPier project will finally get underway in the first half of 2016. Local firm Youngwoo & Associates teamed with LOT-EK – based in Naples, Italy and New York – for this redevelopment of Pier 57, which juts 245 metres into the Hudson River. Dating from the 1930s, the structure was rebuilt following a 1947 fire, which relaunched it as an engineering marvel of the era; over 90 per cent of its bulk is supported by buoyancy. The revitalized landing will include over 37,000 square metres of commercial and cultural space, including new offices for Google and a sprawling rooftop park. Last fall brought news that the project would also house Bourdain Market, the long-awaited food hall curated by celebrity chef Anthony Bourdain. Despite a 2018 completion date for the larger space, the market – designed by local interior design wizards Roman & Williams – could open in as little as two years. 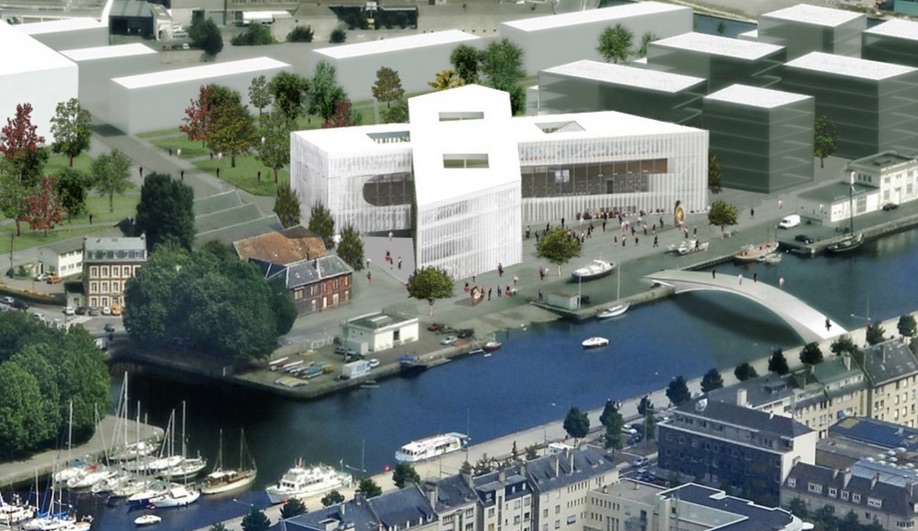 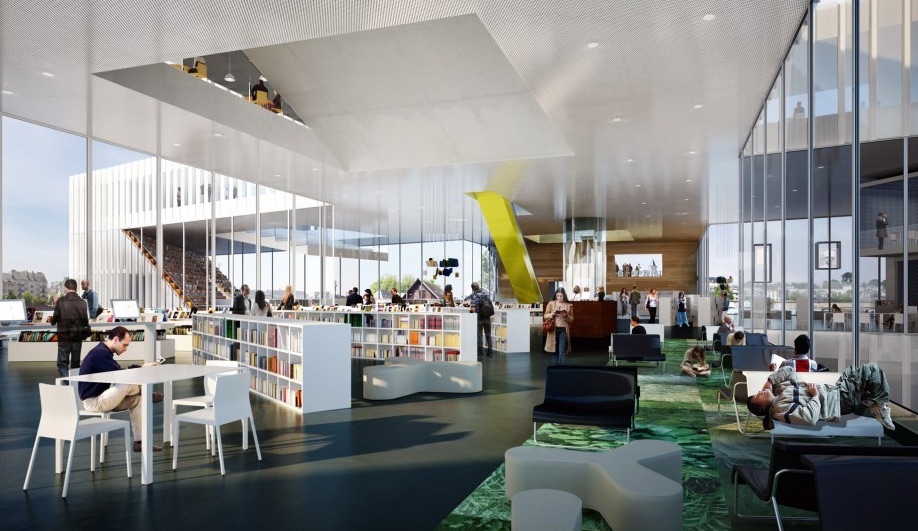 7 BMVR Library by OMA, in Caen, France
Leave it to the firm behind the multifaceted, glass-clad Seattle Public Library – which reaffirmed the power of the book-lending institution over a decade ago – to introduce a whole new typology to library architecture. With the Bibliothèque Multimédia à Vocation Régionale, expected to be completed this year, OMA has created a building that reads as an icon, one that the firm hopes will revive the appeal of physical books in our increasingly digital world. The 13,000-square-metre building is made up of two intersecting rectangular volumes that create an X shape. The four resulting wings divide the content into four subjects: arts, science and technology, humanities and literature. They also point to a quartet of nearby landmarks past and future, including the train station and an upcoming urban development that will no doubt help in the gentrification of the industrial port city. The exterior spaces created by the intersecting reading rooms house public zones, including a plaza that connects to the waterfront. This competition-winning project is also sustainable, and like the Seattle Public Library, it is flooded in natural light. 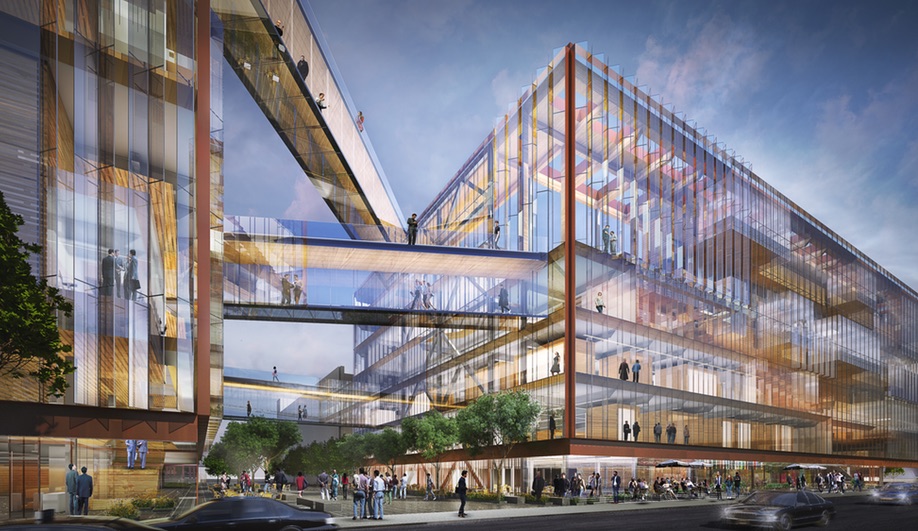 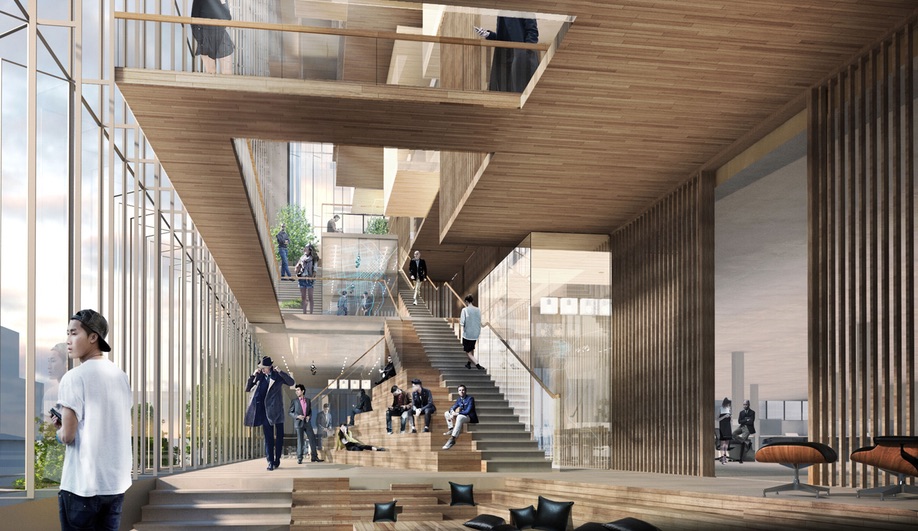 8 Uber Headquarters by SHoP and Studio O+A, in San Francisco
It looks like Uber is here to stay. At least, their permanent headquarters going up in San Francisco seem to imply a company on the rise, consolidating its resources in a splashy new campus. New York-based SHoP architects and Studio O+A (the well-known San Francisco firm that designed the interiors of Uber’s current offices) are spearheading the 39,000-square-metre project. As the project is set on two empty lots in the city’s Mission Bay neighbourhood, the campus consists of two main buildings, one 11 storeys and the other six storeys, which are connected by criss-crossing glass corridors that traverse a small side street below. Its most striking feature is its fishtank-like transparency: the building is almost fully glazed so passers-by can see the busy movements inside. With a target date of late 2017 or early 2018, the building is likely to break ground any day now. 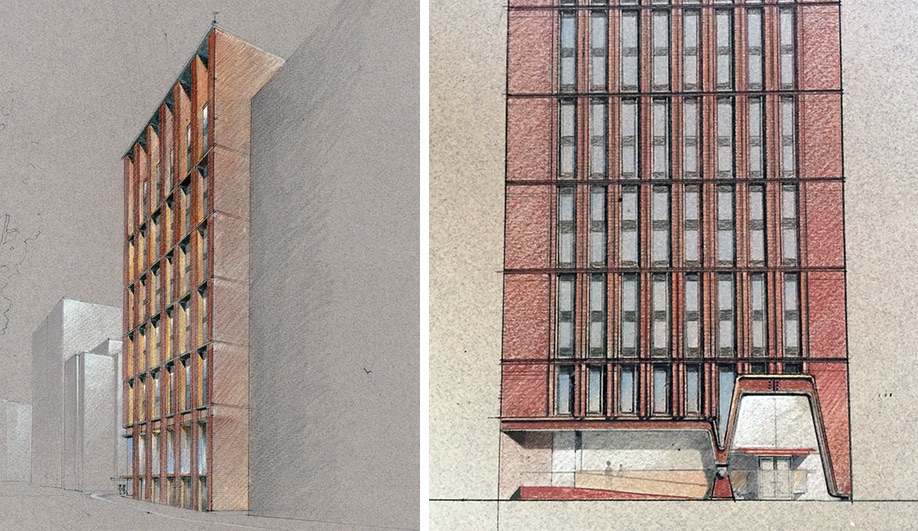 9 Ace Hotel Toronto by Shim Sutcliffe
Reputations collide with the Ace Hotel in Toronto. The upscale hospitality chain is renowned for is design-forward thinking; Toronto, meanwhile, is famously undergoing a construction boom characterized by creative adaptive reuse (and sky-high towers). The Ace Hotel Toronto is in an odd position: the 13-storey new build bucks both Ace’s tradition of remodeling historic structures and the neighbourhood’s penchant for infill that retains features of the pre-existing architecture. Fortunately, the project is in good hands: local firm Shim Sutcliffe has designed an un-fussy exterior reminiscent of the turn-of-the-century red-brick textile factories that dot the surrounding fashion district, but with an added flourish at the main entrance, on a quiet side street. Probably. There’s still very little we know for certain – visuals of the interior and its proposed 130 suites are not yet available – including whether the project will make its 2018 completion date. But with construction soon to get underway, it’s one project we’re watching closely. 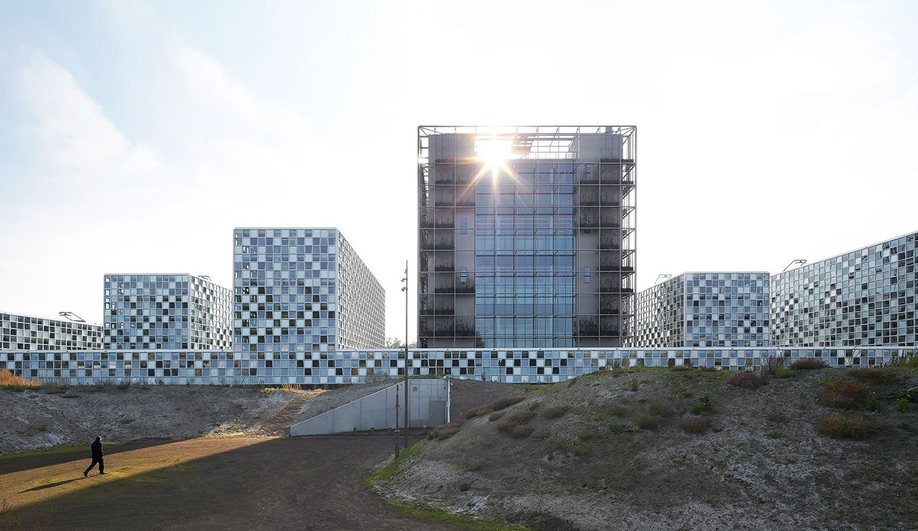 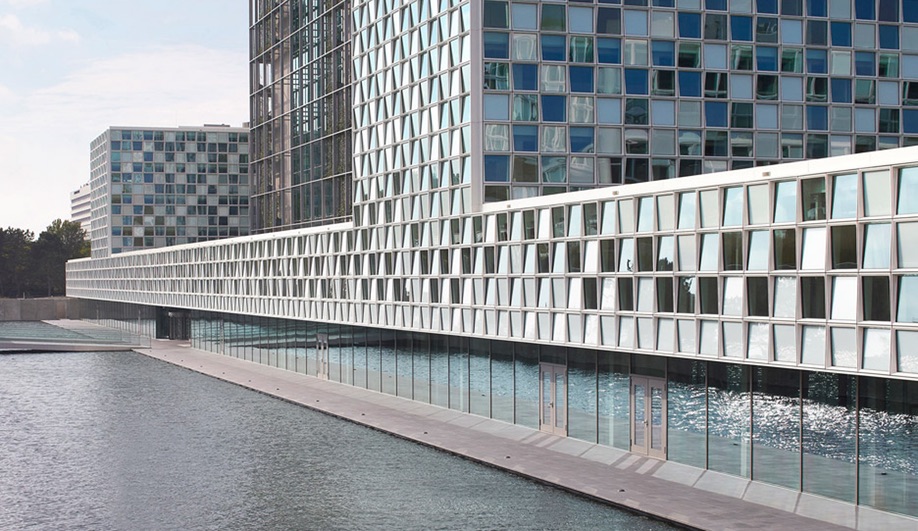 10 International Criminal Court by Schmidt Hammer Lassen, in the Hague, the Netherlands
Schmidt Hammer Lassen brings a wealth of experience gained working on projects that require a deep understanding of social context, notably their many libraries and cultural buildings. It’s hard to think of a project where this understanding would be more crucial than the International Criminal Court in the Hague – the seat of the judicial body responsible for prosecuting cases of genocide, crimes against humanity, and war crimes. Security was obviously a prime concern for the design team, but so was the need for a structure that would represent the values of justice, openness and balance that the ICC stands for.

The checkered glass exterior of the 54,000-square-metre complex is now finished, waiting only for the greenery that will fill in the open scaffold-like sections of the central building. The interior, still undergoing installation under tightly controlled security, will be officially inaugurated in April of this year. When it opens, the ICC’s transparency, white gridded facade, placid water features and abundant greenery will offer an orderly, tranquil setting that will, it is hoped, serve as a counterpoint to the gravity of the matters under investigation inside.