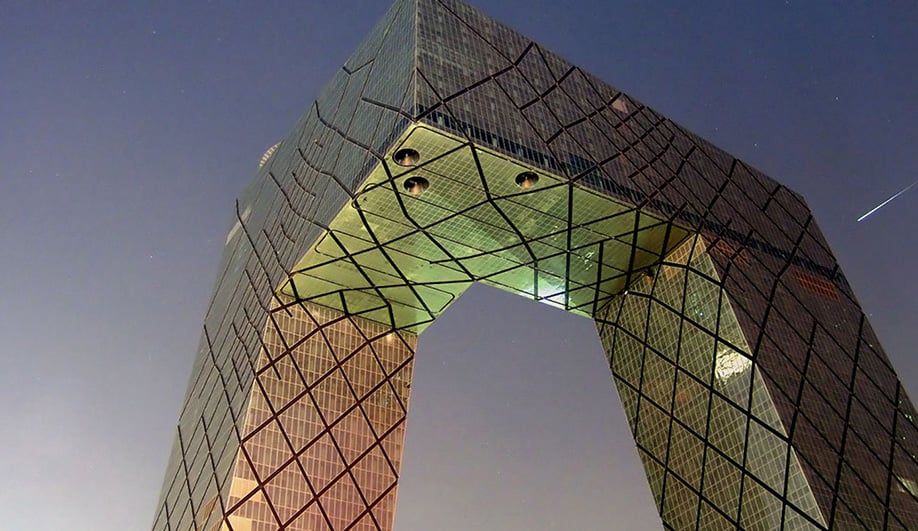 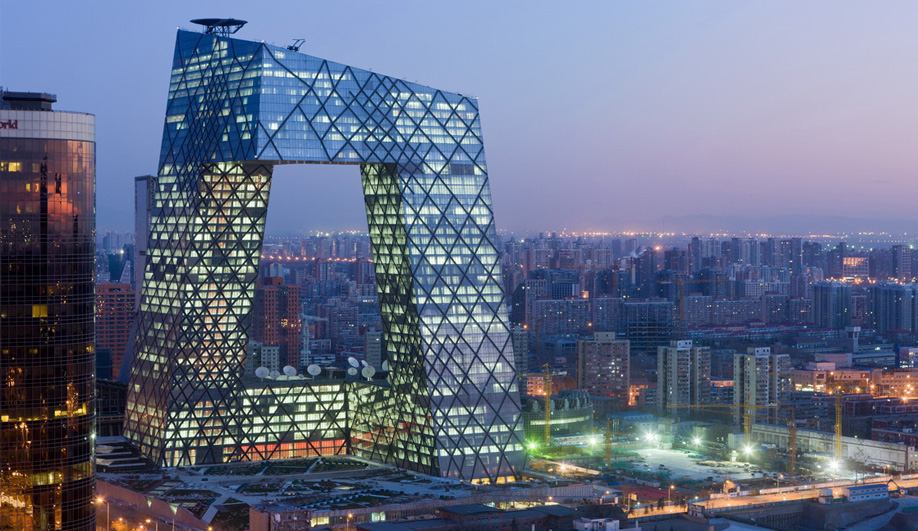 1 CCTV in Beijing by OMA (Rem Koolhaas and Ole Scheeren)

While it’s not the tallest building in China, the CCTV tower by OMA is by far its most iconic, and it has been ever since plans for the super-structure were first unveiled in 2002. It has taken ten years to finally reach completion, and along the way the conjoined tower’s unusual boxy form has made it an easy target of nicknames, including the locally preferred “big underpants.” The two towers are joined at the top and bottom, providing a continuous loop within that services CCTV’s entire television production process. Interconnected activities are found throughout the building, creating a dynamic network of social continuity. Because of the building’s fame, plans are now afoot for it to become a tourist attraction, letting visitors traverse its internal loop. 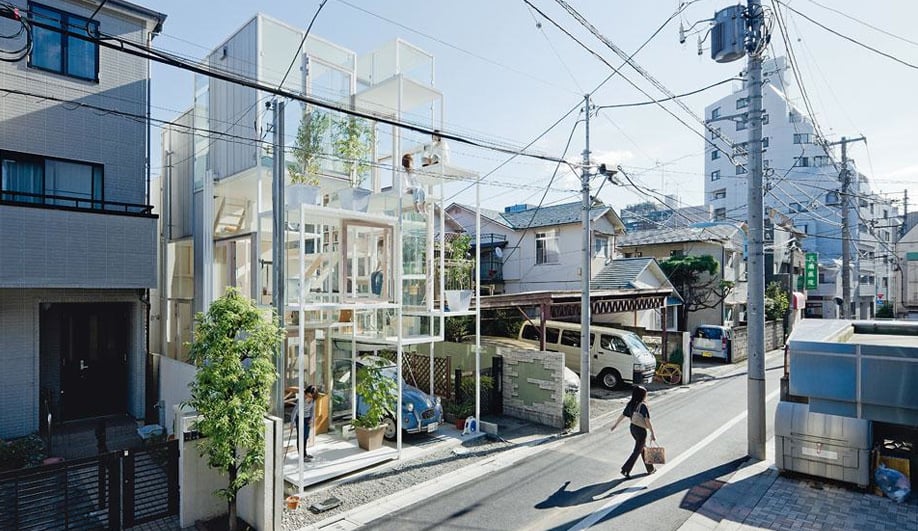 This is definitely not a house for everyone, but for one couple in Tokyo the idea of living in an all-glass house that appears to have no walls at all, is an intriguing social experiment. Designed by Sou Fujimoto, the tiny house’s small plot, just 46.5 square metres, is surrounded by buildings, which means neighbouring walls double as walls for House NA, with only a sheet of glass dividing them. The architect describes the interior as 21 different “floor plates” that provide 21 different spaces. Each “room” is like a branch on a tree where people can perch. 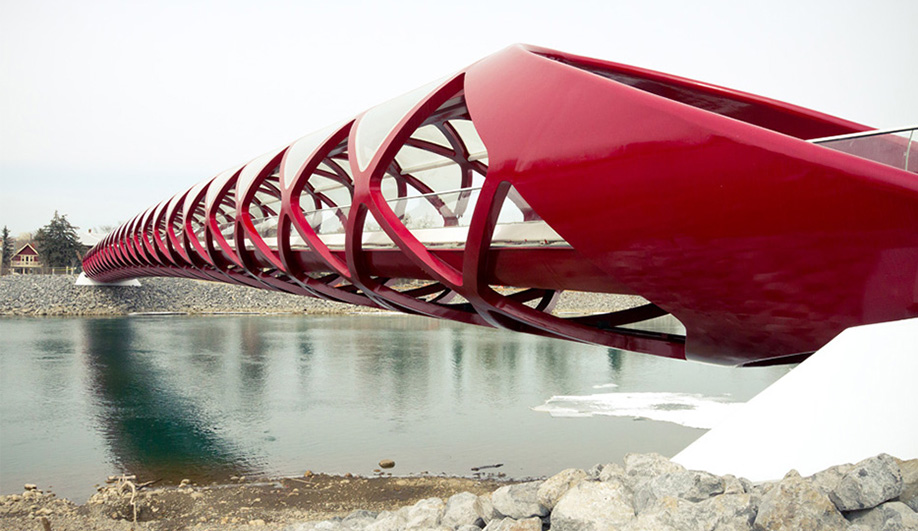 In March, Calgary cut the ribbon on a spectacular new pedestrian and cycling bridge by Spanish architect Santiago Calatrava. The steel structure spans 130 metres and connects the downtown core with residential areas on the other side of the Bow River. Painted a brilliant red on the exterior and white internally, the long, lean structure has a glass roof and integrated linear lighting for night-time illumination. A dedicated bike lane runs down the centre with foot traffic travelling along elevated sidewalks on either side. Calgarians may have grumbled about the project’s high cost and delayed schedule, but a reported 6,000 people are now using the bridge daily, a much higher number than expected. Photo by Ian Harding.

At this year’s Venice Architecture Biennale the Russian pavilion offered visitors one of the most visually engaging and immersive displays. Every inch of the pavilion’s dome-topped interior was illuminated by a seamless grid of backlit QR codes. As visitors walked into the space they were handed an iPad and by pointing the tablets at the codes, information emerged onto the screen. It was impossible to see and take in everything that was embedded within the coded surfaces, and the results were more fragmented and random than descriptive. The accumulative effect, however, was the visceral sensation of standing within so much unseen information. In fact, the QR codes provided endless data on the Skolkovo Innovation Center, Russia’s massive Silicon Valley that’s now in the making. 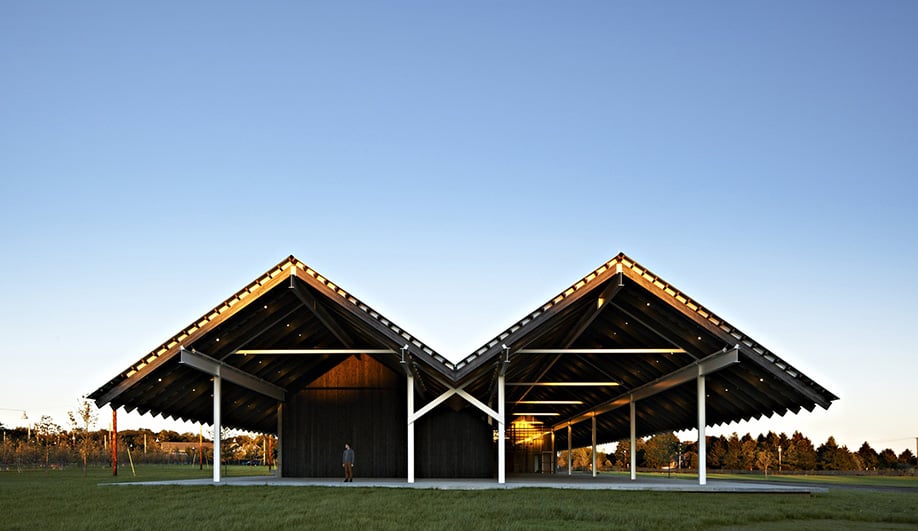 When the Parrish Art Museum couldn’t drum up the $80 million it needed to build a new and larger venue designed by Herzog & de Meuron, the architects went back to the drawing board and presented a more modest proposal at one-third the cost. Open since November, the new museum is no less impressive than the original plan. Its long barn-like profile measures 193 metres in length and the galleries are arranged in two rows along a central corridor. The biggest statement, however, is outside, where an oversized metal roof forms a giant W, providing a shaded porch around the entire building. Final price tag: $28 million. 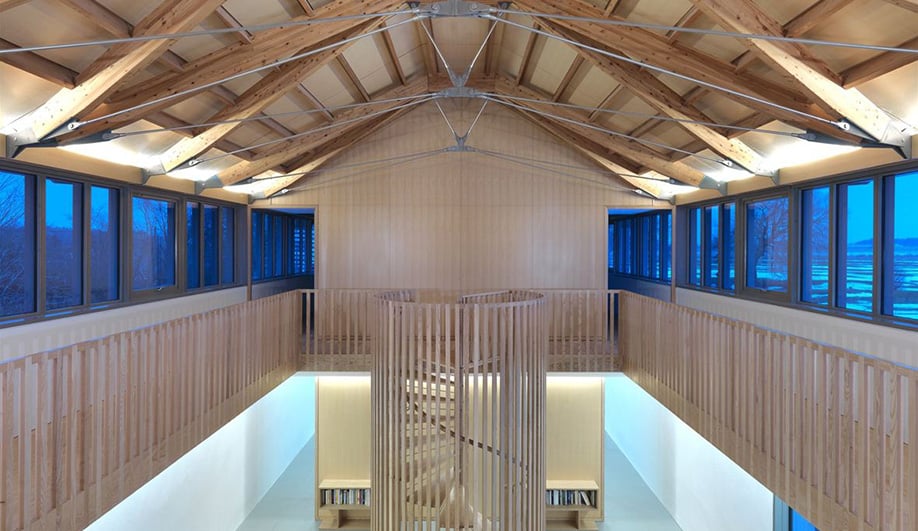 6 The Long House in North Norfolk, U.K., by Hopkins Architects

Three years ago Alain de Botton, author of The Architecture of Happiness, co-founded an ambitious plan called Living Architecture that invites architects to build rental cottages at various sites across the U.K. The latest one, the Long House by Hopkins Architects, is an elegant prairie-long getaway that sits on the top of a hill in North Norfolk – its only neighbours are a few traditional houses, a church and a farmyard. Linear in form, the understated design employs a number of vernacular features, including exterior walls made of locally sourced flint. Michael Hopkins described the layout of the house as “terribly simple” – a hole carved in the middle with a wooden spiral staircase in the void. Encased in a slatted-wood cylinder, the stairway steals the show. 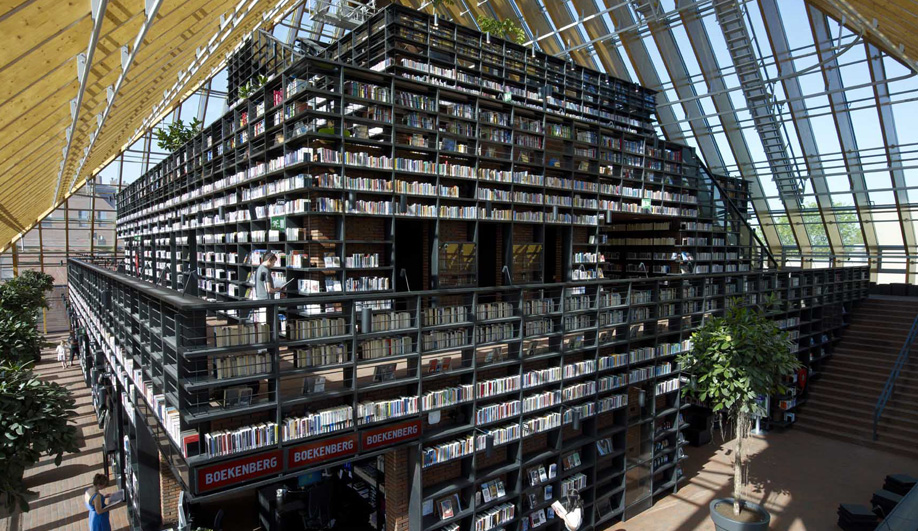 7 Book Mountain in Rotterdam by MVRDV

MVRDV’s new library in Rotterdam is called Book Mountain for the obvious reason that a massive stack of bookshelves fills its core and rises three stories at a rather steep incline. It is topped with a glass pyramid roof and a continuous route culminates at its peak, where a reading room and café offer readers views of Rotterdam. The rest of the library amenities, such as meeting rooms, offices and retail spaces, radiate from the central form like settlements in the foothills. 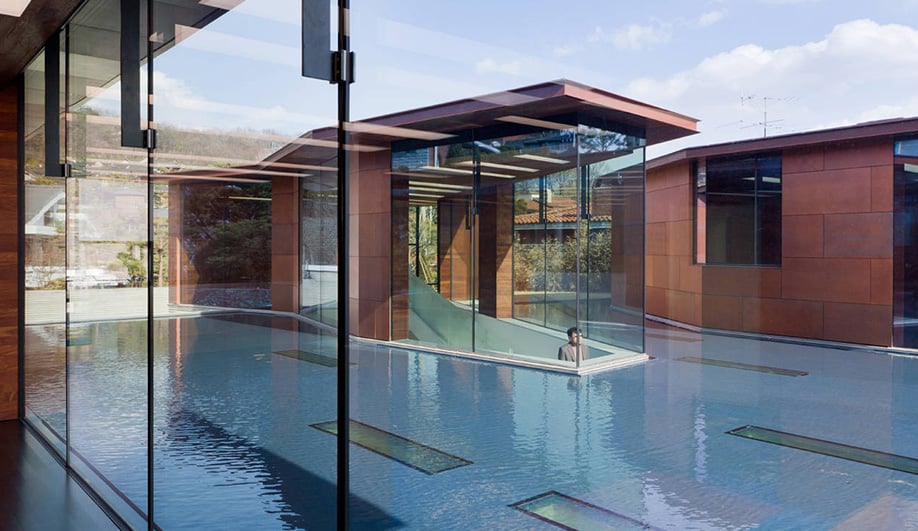 8 Daeyang Gallery and House in Seoul by Steven Holl Architects

Seoul is proving to be a hotbed for architectural innovation and the Daeyang Gallery and House is a stellar example of how willing clients are letting architects push beyond convention. Open since June, the gallery and house designed by Steven Holl is a composition in sequential movement. Three parcels ­- one for entry, one a residence and one an event space – appear to push upward from a continuous gallery level below. A reflecting pool, which simultaneously separates and connects the pavilions, establishes a plane of reference from above and below. By ascending a set of stairs into the entry pavilion, visitors find themselves elbow height with the unifying sheet of water. 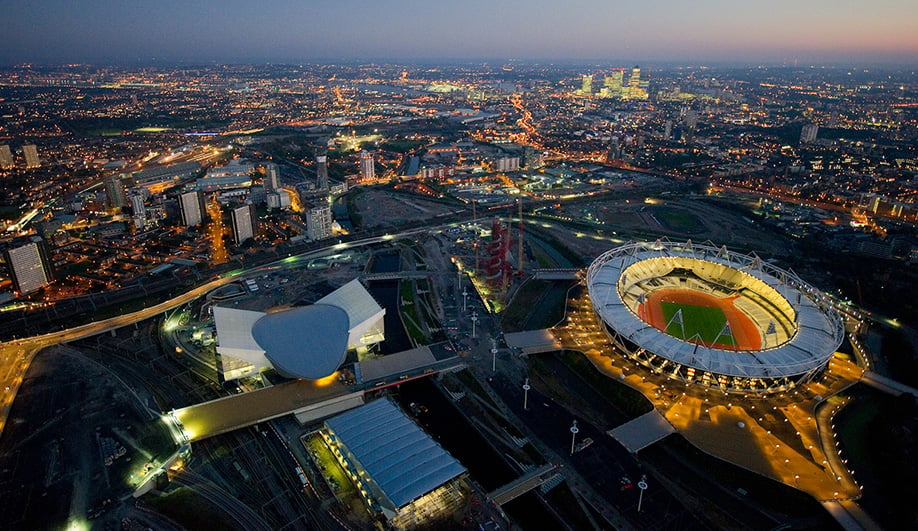 Fundamentally, staging the Olympics is unsustainable, but London made every effort to make this year’s biggest sporting event the greenest ever. The remediated site, for one, transformed 202 hectares of industrial wasteland into a detoxified park with 4,000 new trees, 74,000 plants, 60,000 bulbs and 300,000 wetland foliage – representing the largest landscaping effort in British history. Planning for life in the park post-Olympics has also been worked into the scheme. The temporary seating that surrounded Zaha Hadid’s Aquatic Centre, for instance, will be removed to reduce seating from 17,500 to a more reasonable 5,000; the athletes village is morphing into housing for 2,800 residents; and the basketball arena, wrapped entirely in recyclable PVC, is being disassembled and relocated to a location where its most needed. London gets another gold.

Along with the new Peace Bridge by Calatrava, Calgary also inaugurated its tallest skyscraper this year, designed by Foster + Partners. The 58-storey glass and steel structure, headquarters for EnCana and Cenovus, is packed with sustainable attributes; top among them is the building’s curved form that’s designed to use sunlight to heat the interior. The Bow may not be a major project for the famous U.K. firm that’s engineered some of the most sophisticated structures in the world – including Virgin’s new space-travel terminal in the New Mexican desert – but it is an important symbol for the oil-rich city that’s just beginning to pay attention to the look of its downtown core and to the quality of its buildings.