2014 in Review: Top 10 Big Projects
From a glass distillery in London (by the always-inventive Thomas Heatherwick) to Jean Nouvel's skyscraper in Sydney (draped entirely in greenery), here are 10 of the most mind-bendingly ambitious buildings completed this year. 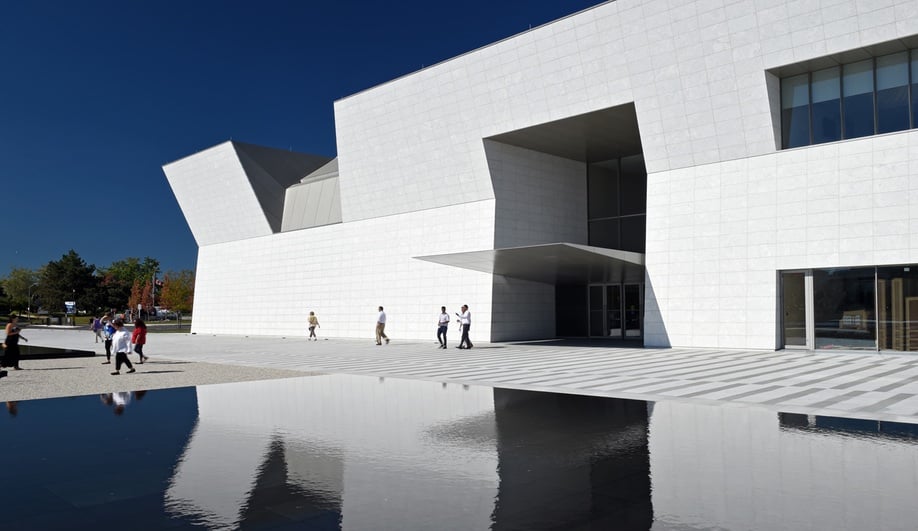 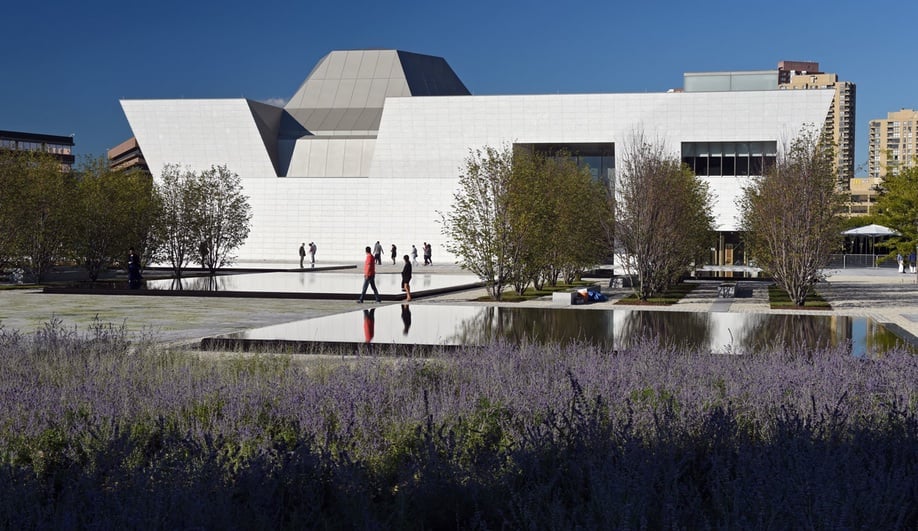 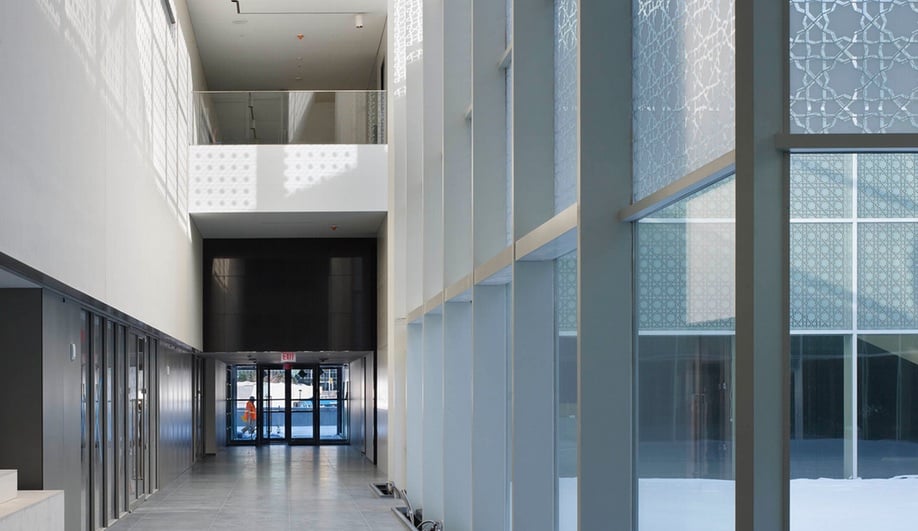 1 Best cultural centre: Aga Khan Museum and Ismaili Centre by Maki & Associates, Charles Correa and Moriyama & Teshima Architects
With their contemporary take on Arabic architecture – including towering etched-glass interpretations of traditional mashrabiya lattice work and pristine surfaces – Japanese architect Fumihiko Maki’s Aga Khan Museum, and Indian architect Charles Correa’s adjacent Ismaili Centre, make a striking addition to the north end of Toronto, where ambitious architecture rarely finds a home. The museum sits at one end of a seven-hectare site landscaped with mature trees and reflecting pools. Its angular form, which juts outward and upward toward the roofline, and white Brazilian granite cladding are both intended to catch light, shadows and reflections. Inside is a millennium’s worth of Islamic art from the personal collection of Prince Karim Aga Khan IV, the holy leader of 15 million Ismaili Muslims around the globe, including ancient text, ceramics, metalwork and architectural elements. The $US300-million project is by far one of the most significant cultural gifts to the city. 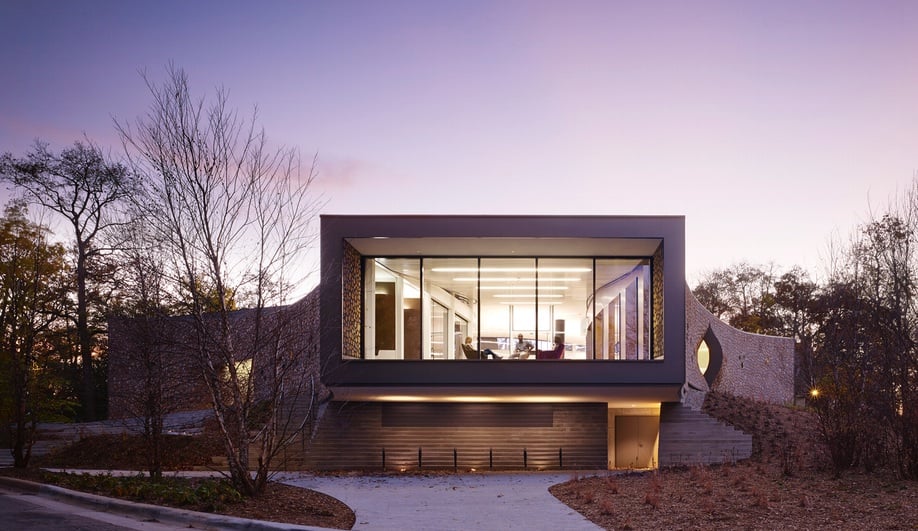 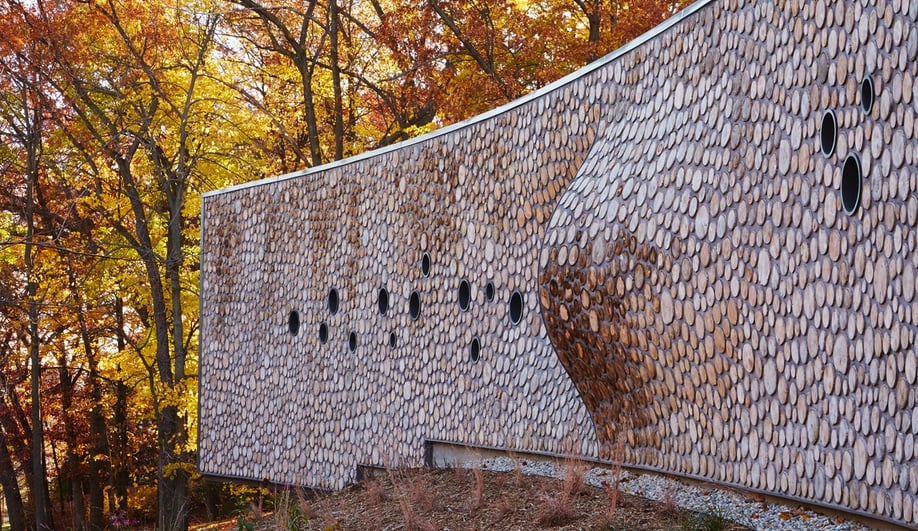 2 Best campus building: Arcus Center by Studio Gang Architects
As a learning and meeting space for students, faculty, and visitors, the Arcus Center for Social Justice Leadership at Kalamazoo College, Michigan, only needed to provide basic facilities; as the architecture firm’s website points out, “a church basement, a living room, or even a kitchen table” would have sufficed. But Jeanne Gang’s intention was to elevate the pursuit of social justice in both a literal and a poetic sense, by creating a space that evokes harmony and the convergence of ideas in a physical way. The resulting Y-shaped plan projects in three directions, each culminating in an entire wall of glass to offer views out to the surrounding trees. A section of the roof, invisible from outside, is subtly lifted to create the clerestory windows that light the core of the building, where a fireplace offers an inviting place to congregate. The curving exterior walls hold minimal glazing – a few porthole-like openings here, a vertical slit there – and, outside, are clad in wooden disks sawn from logs to reveal their rings. The entire structure seems to balance on the peak of a knoll, speaking to the elevated goals pursued within. 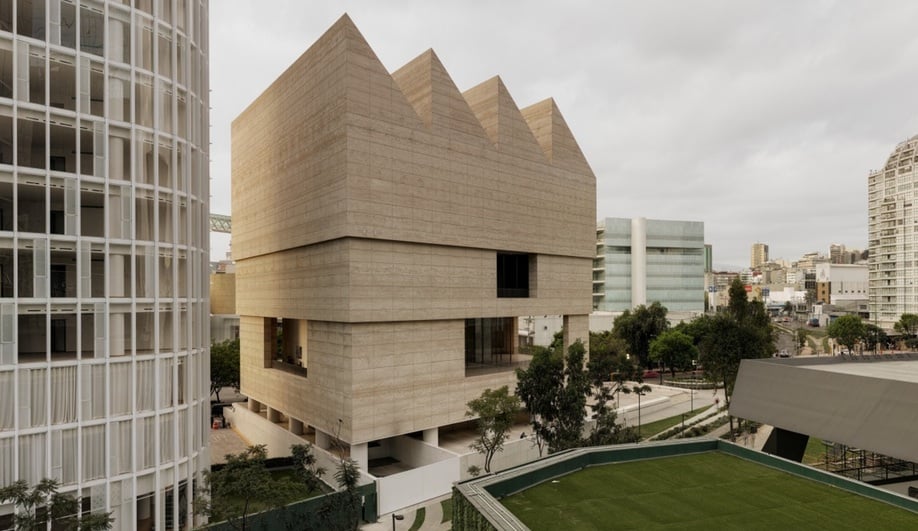 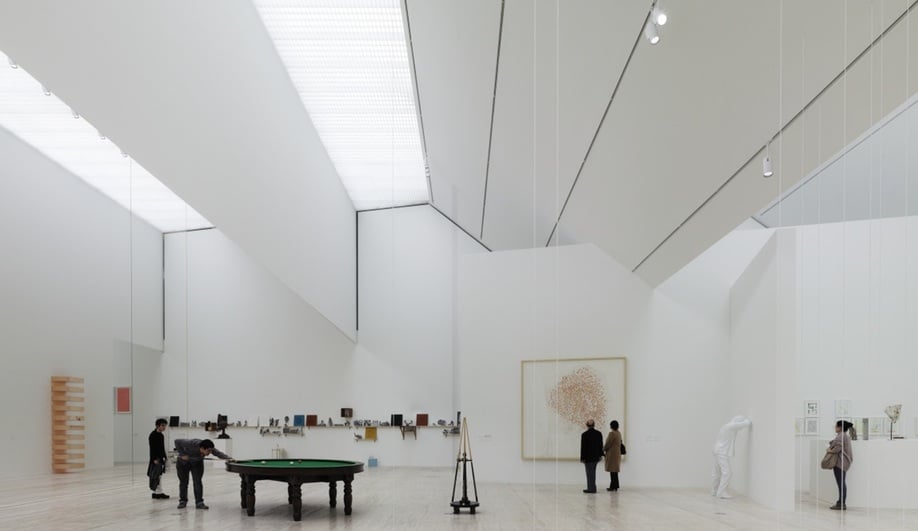 3 Best art gallery: Museo Jumex by David Chipperfield Architects
Built to house the private contemporary art collection of Colección Jumex, owner of Mexico’s leading juice company, David Chipperfield’s three-storey-tall gem of a building is a paragon of travertine-clad understatement. The most distinguishing feature of the relatively small, 2,500-square-metre building is a row of sawtooth peaks that give it the look of a crown. The museum has a wedge-shaped floor plan and the gallery spaces are intentionally plain, letting the art take the lead. In building the newest addition to the upscale Polanco neighbourhood in the heart of Mexico City, an area that has become crowded by signature structures in recent years, Chipperfield had to contend with two neighbouring skyscrapers and the splashy Museo Soumaya across the street, by OMA alumnus Fernando Romero of FR-EE. The result is a timelessly elegant building within a sea of bling and glamour. 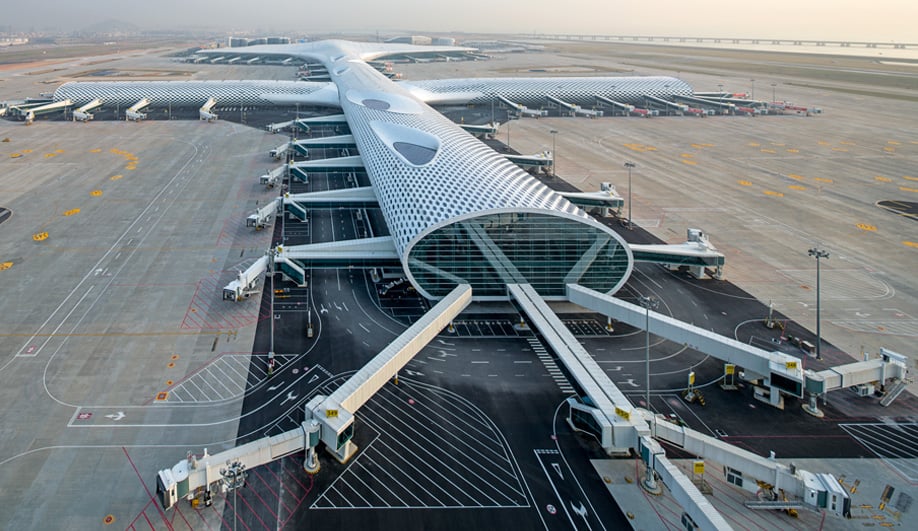 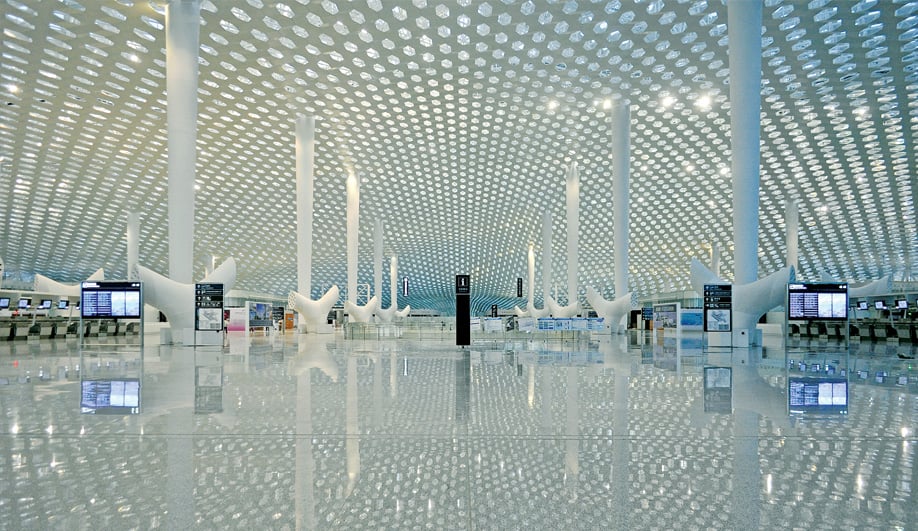 4 Best airport: Shenzhen Bao’an International Airport, Terminal 3, by Studio Fuksas
Unlike any other building, an aerial view of this project provides a spectacularly unique perspective. With none of the typically identifiable components – a clearly defined roof, walls or windows – this is a bird of a different feather. The new international portal to one of the fastest-growing cities is an apt welcome to a changing world and a glimpse at how technology will continue to affect our built environments. Wrapping three levels of services, departures and arrivals in a biomorphic shell, the complex brings to mind a number of organic forms, from rolling hills to the multifaceted eye of a fly. Thousands of hexagonal apertures take the place of traditional windows, filling the interiors with natural light. Rome architects Doriana and Massimiliano Fuksas employed parametric modelling to plot these cells in an arrangement that diffuses daylight and eases passive solar effects. 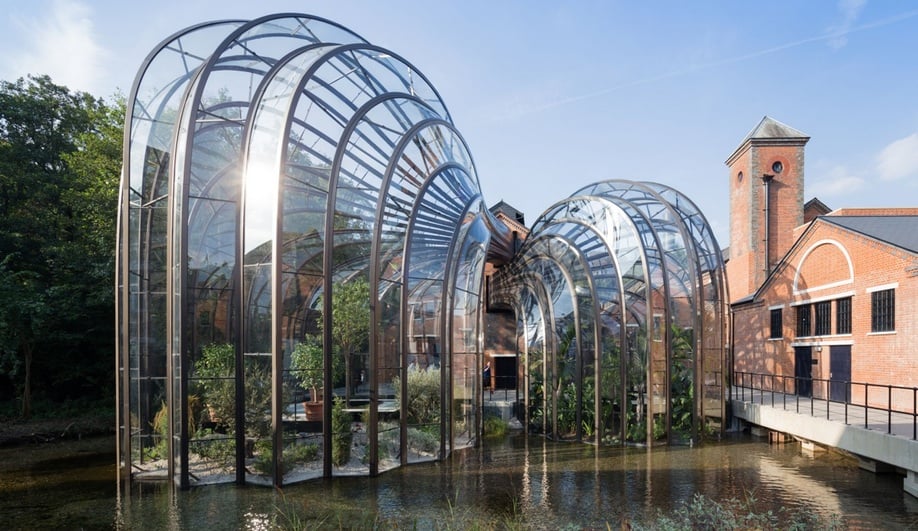 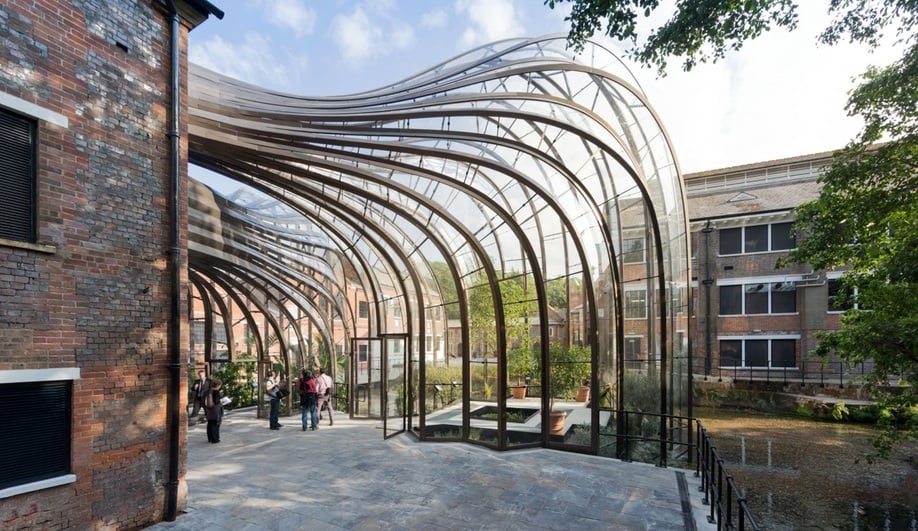 5 Best greenhouse: Bombay Sapphire Distillery by Heatherwick Studio
Thomas Heatherwick’s remarkable greenhouses for Bombay Sapphire’s headquarters in Hampshire, which opened in September, are situated on what was once the site of a water-powered paper mill. The British architect turned to new technologies to engineer these structures – made up of 893 individual glass panes – that serve a key role in the modern distillery, making them as functional as they are beautiful. Containing two individual climates, one humid and tropical, the other dry and Mediterranean, they provide the ideal environments in which to grow the botanical ingredients used in the brand’s famous gin. The horn-shaped forms bloom from the main still house, siphoning excess heat through their stems, and touch down in the adjacent river, which was widened as part of Heatherwick’s scheme for the site. His masterplan also included the retrofit of over 40 derelict buildings. 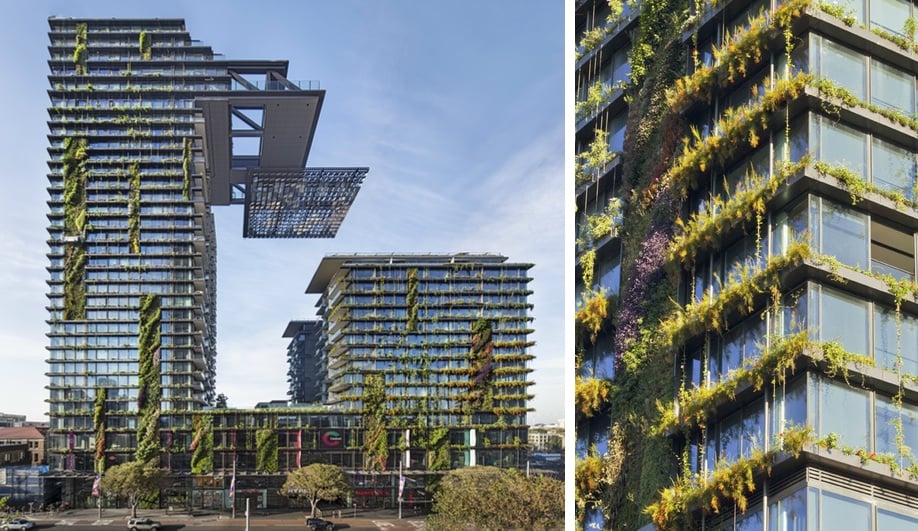 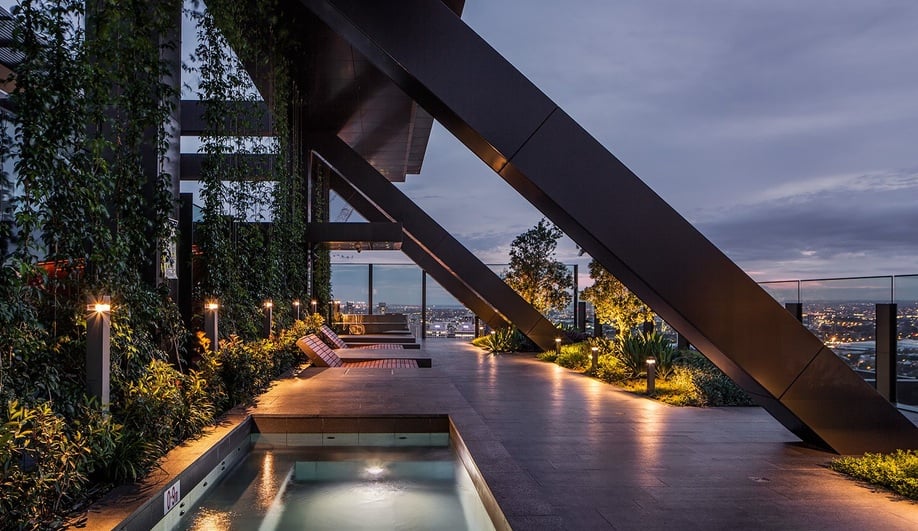 6 Best skyscraper: One Central Park by Ateliers Jean Nouvel
It’s not surprising that this massive residential complex in Sydney, Australia, was the recipient of the Best Tall Building Worldwide, presented by the Council on Tall Buildings and Urban Habitat in November. The project, by French architect Jean Nouvel, is a marvel in every way: technologically, physically and sustainably. Its two main towers are draped from top to bottom in flowers and greenery, the work of French botanist Patrick Blanc. And to keep this massive vertical park and its surrounding earthbound gardens properly fortified with light, the complex sports a cantilevered light-reflecting system where 42 heliostats on the rooftop of the lower tower redirects sunlight up to 320 reflectors cantilevered off the taller one. Illumination then beams downward into areas that would otherwise be in permanent shade. Orchestrated to move as natural light changes, the suspended panel becomes an LED screen at night, choreographed by artist Yann Kersalé. 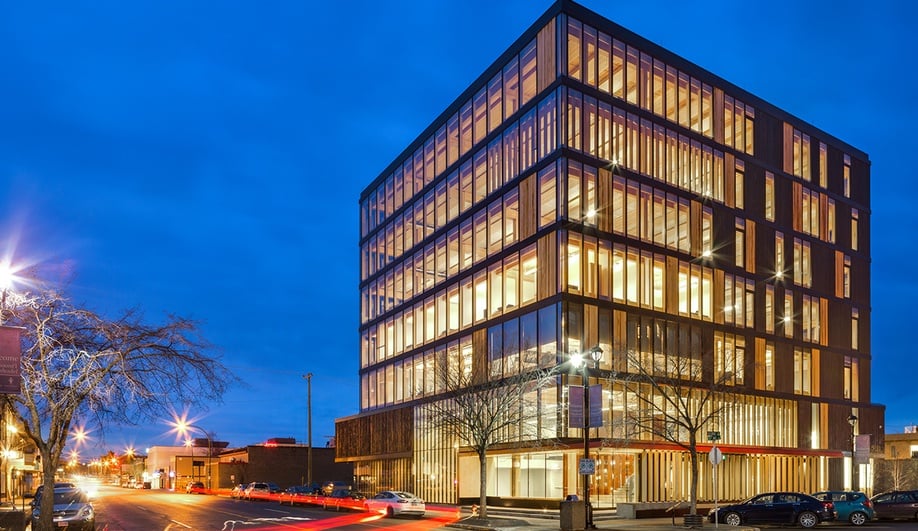 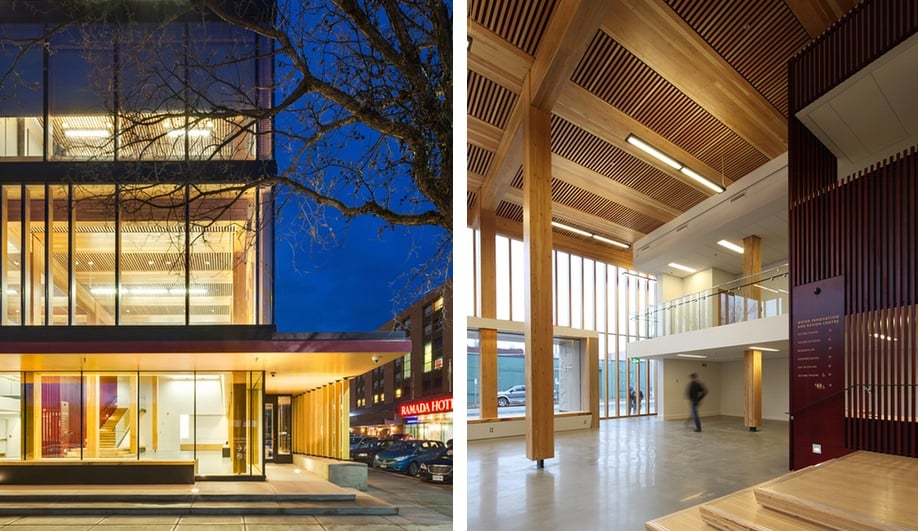 7 Best construction: Wood Innovation and Design Centre by Michael Green Architecture
At 30 metres tall, the Wood Design Innovation and Design Centre in Prince George, British Columbia, now holds claim to being the tallest all-wood structure ever built. The only concrete used in the 10-storey office building, designed by Michael Green of Vancouver’s MGA, is to be found in the foundation and a small concrete topping at the penthouse level where mechanical equipment is housed. Clad in charred cedar siding, the building’s structure and finishes are made from 1,700 cubic metres of wood that is almost exclusively engineered, including cross-laminated timbers and laminated veneer lumber (the latter of which was used for the more visible areas, such as the feature stairs and canopy). Green has been an advocate of timber high rises for years, crediting the material’s 100 per cent renewability as a convincing reason to move away from steel and concrete. The all-wood idea is definitely catching on, with such architects as this year’s Pritzker laureate Shigeru Ban also exploring the material in innovative ways. 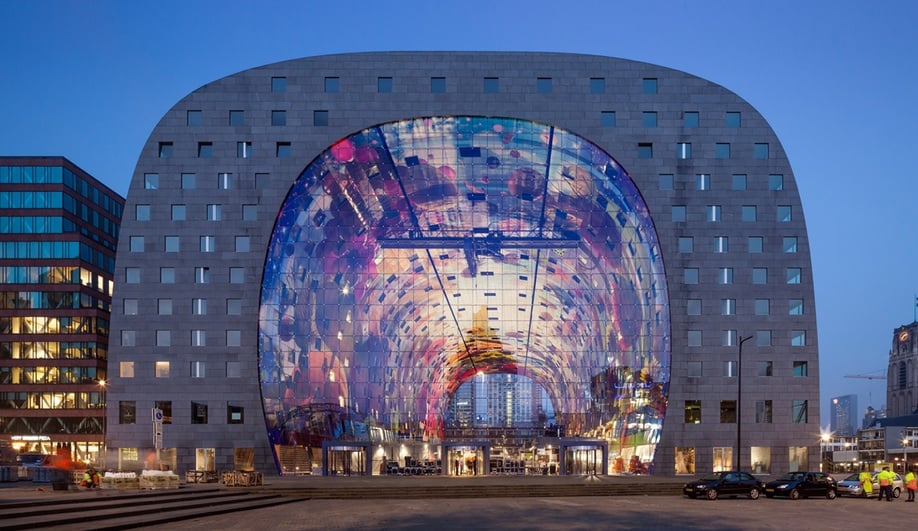 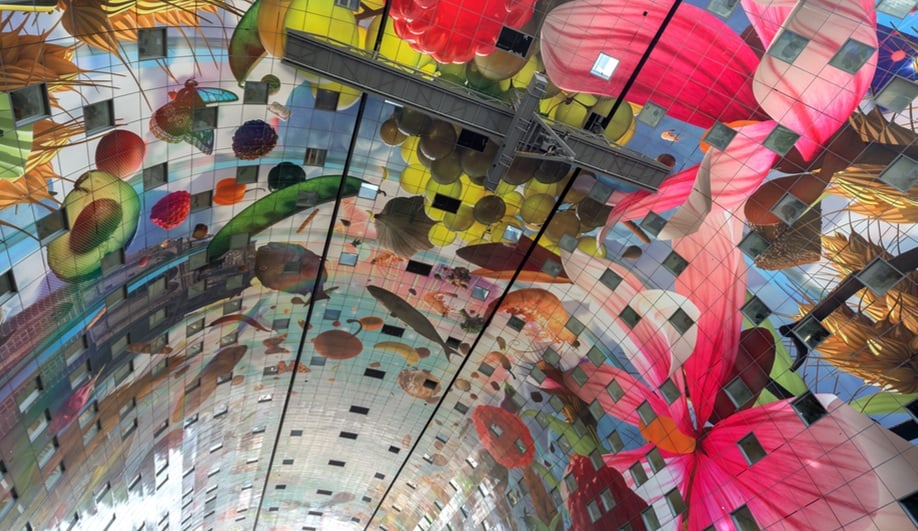 8 Best mixed-use building: Markthal by MVRDV
A new kind of building was born in October with the opening of Rotterdam’s Markthal, one that brings together a massive farmers market and 228 residential units, all contained within a rainbow-shaped shell. Designed by Winy Maas of MVRDV, Markthal is a sensorial explosion on every level, from the Pixar-generated mega-mural depicting giant flowers and fruit plastered across the arched hall to the bustle of 100 fresh produce stalls and a submerged supermarket. When the project, which took a decade to build, finally opened, the reviews were mixed. Oliver Wainwright of The Guardian described its C-shaped form as “wilfully clumsy.” Azure contributor Brendan Cormier found the hall’s mural “kitschy,” but the overall effect impressively atmospheric: “Its a new way of juggling multiple functions at once while serving as a vital focal point for the city.” 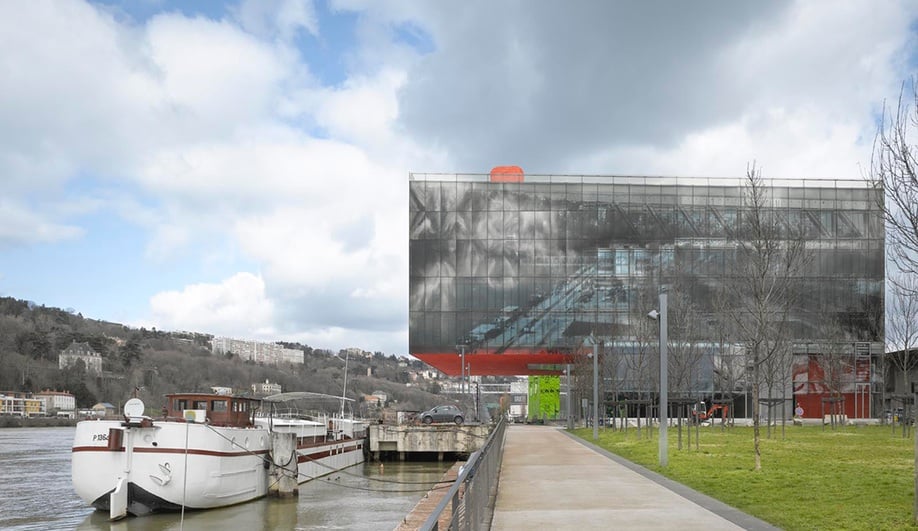 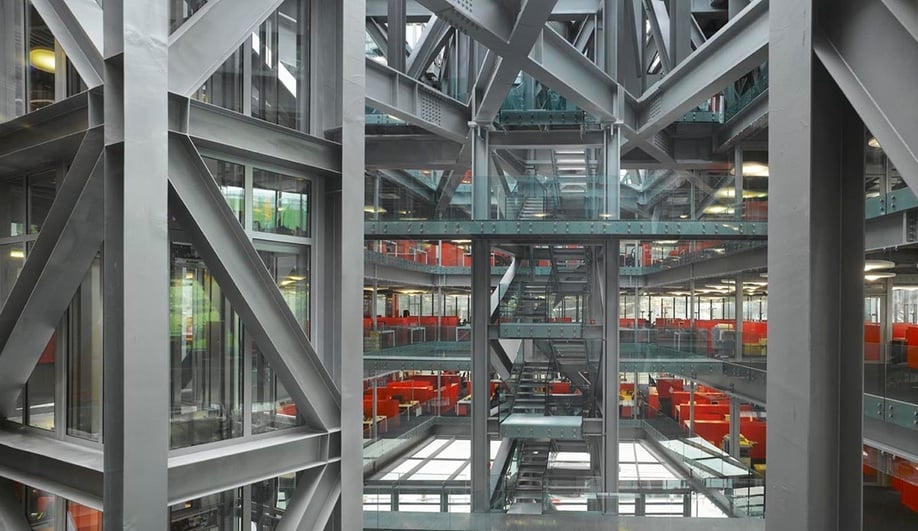 9 Best office building: GL Events Headquarters by Studio Odile Decq
The Confluence district of Lyon, France, has seen its share of breathtaking architecture over the past few years – Jakob + MacFarlane’s bubbly Orange Cube and Coop Himmelb(l)au’s warp-speed Musée des Confluences (see below), to name two. One powerful addition is Odile Decq’s GL Events Centre, which hovers like a stormcloud over the Saône river just steps from where it empties into the Rhône. A mirror-finish cladding reflects the landscape its presence “erases,” and hides an interior that bristles with I-beams, riveted and painted smoky grey. Belying its orthogonal exterior, the building’s 8,300-square-metre floor plan comprises unusual angles – the effect of huge double-crossing beams that top the fourth floor. Offset by 86 degrees, these supports flank the central atrium, and make possible a breathtaking 28-metre cantilever that pushes the top four storeys of the structure west, out over the surface of the water. But GL Events Centre isn’t all machine-age grey: furnishings, casework, feature walls and the underside of the cantilever are coloured Decq’s signature blood red, adding a vibrant sense of luxury that warms and humanizes the sinewy interior. 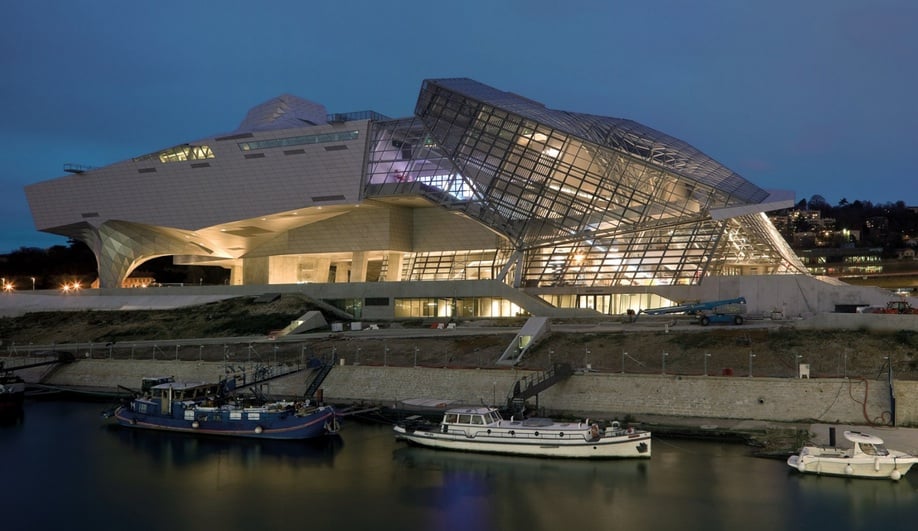 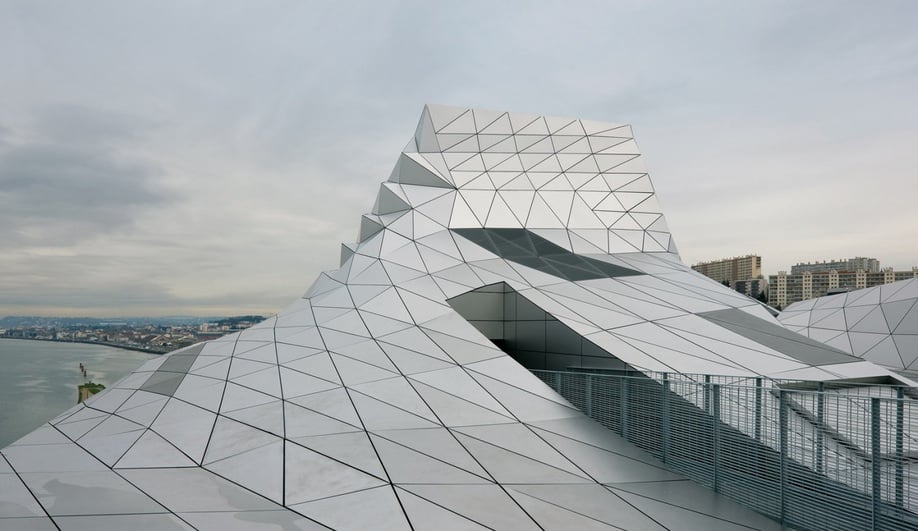 10 Best museum: Musée des Confluences by Coop Himmelb(l)au
When the Guimet museum, in Lyon, France, closed in 2007, its impressive collection was mothballed. The pieces included both those the museum had acquired since its 1879 opening, and more inherited from the city’s original natural history museum, which dated back to 1772. Much of that stock, including the Earth Sciences collection, is now unpacked and on display at this new institution, which opened December 20. The building concept borrows from the site, at the junction of the Rhône and Saône rivers. Intended as a meeting place for the city and a “gateway to the knowledge of our time,” it faces the urban centre with a welcoming façade. Dubbed the Crystal, this section is glowing, transparent and inviting. It joins with the contrasting volume the architects refer to as “the Cloud,” a three-storey spaceship of a structure that sits atop leg-like pillars. Clad in steel, it is broken into a sequence of 10 black boxes, emitting no light in order to protect the sensitive materials on display within.