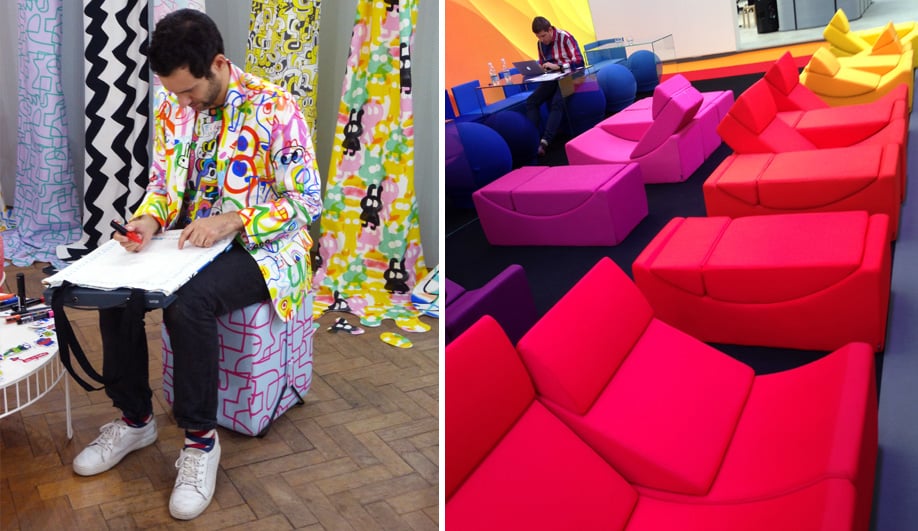 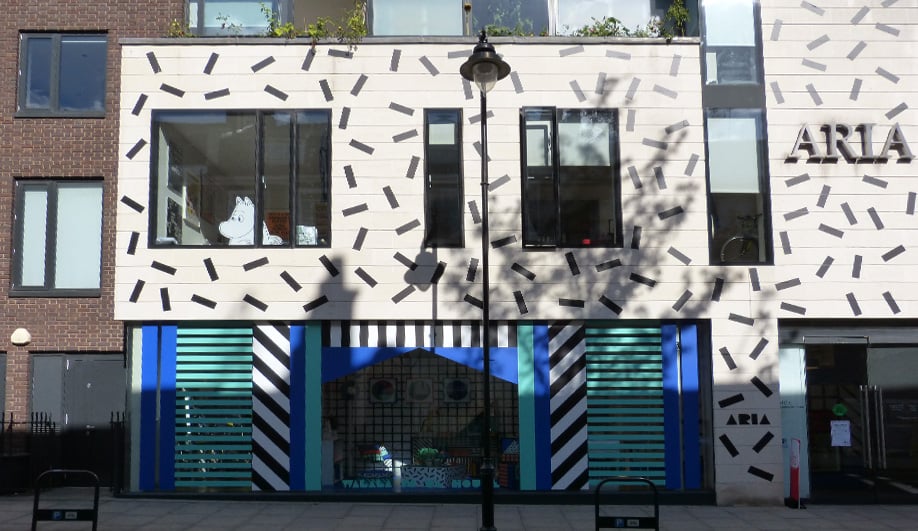 1 Camille Walala’s Memphis facade
To herald her new Memphis-inspired line of poufs, lamps and tableware, Camille Walala dressed the facade of the North London concept shop Aria in monochrome “confetti” and dissonant stripes. In the front window, she set up a room with windowpane-check wallpaper, ziggurat bookends, framed art and geometric shelving. 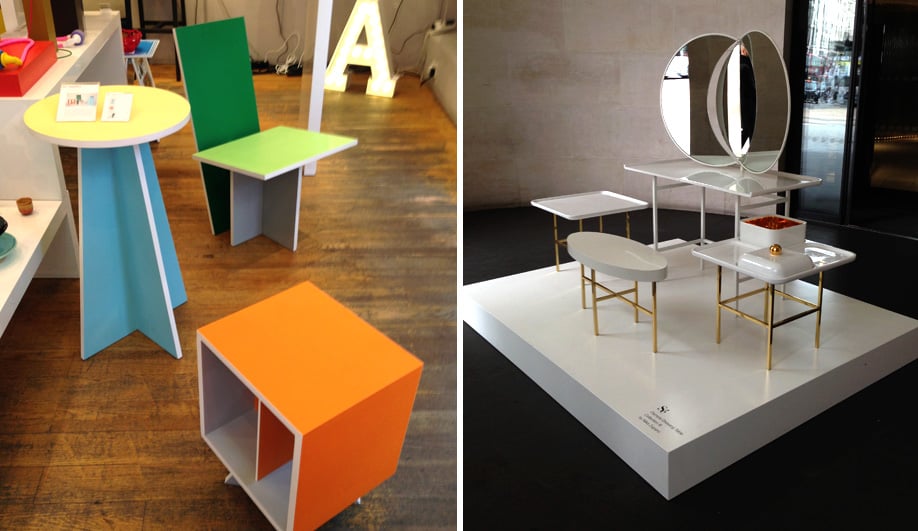 2 & 3 Do Masters at Do Shop (above left); Nika Zupanc for Sé (above right)
The Do Masters show at Do Shop in Covent Garden was also Memphis-inspired. Recent design grad Samuel Connolly – a nominee for the 100% Design Award at New Designers 2015 – made the Lucis painted-wood furniture range. Meanwhile, Sé presented the company’s collaboration with Slovenian designer Nika Zupanc at boutique hotel ME London. The slender brass pieces with glazed ceramic tops are precariously top-heavy, so Zupanc eschewed drawers and instead added intriguing ceramic “whisper boxes” to hold toiletries and keepsakes. 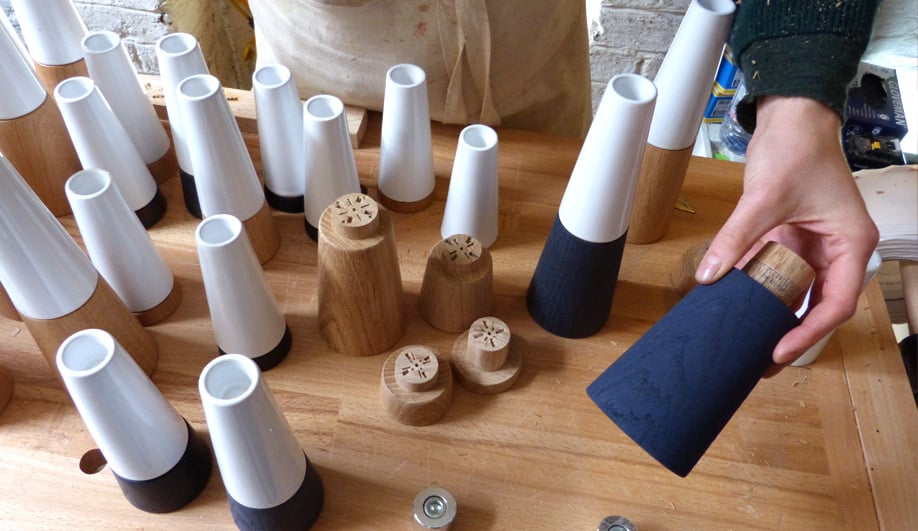 4 Factory by Benchmark and 1882
Furniture studio Benchmark and ceramic-maker 1882 collaborated on a pop-up “Factory” in a 200-year-old East London warehouse. Woodworkers laboured in-situ on a lathe while a ceramicist cast vessels in a plaster mould. Combined they made salt-and-pepper shakers and oil-and-vinegar drizzlers, which were put to use in the adjacent restaurant, where diners sat at Max Lamb’s new Planks table for Benchmark. 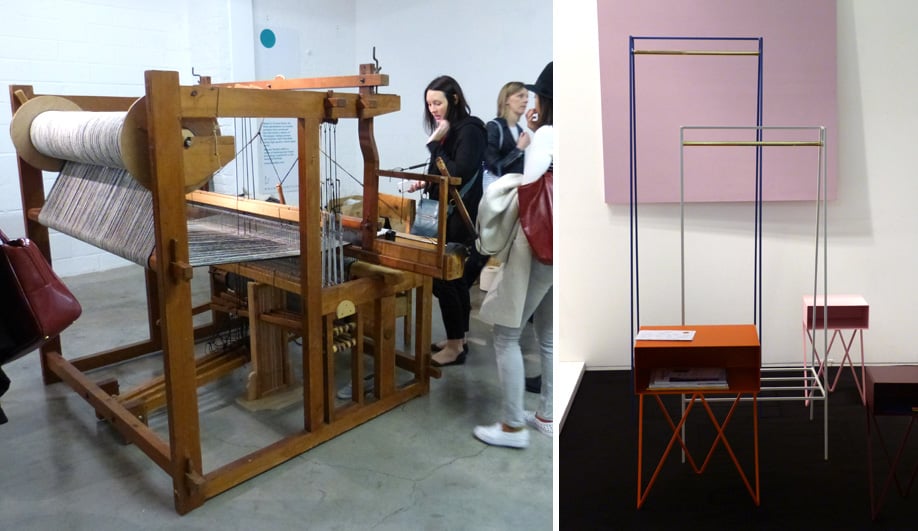 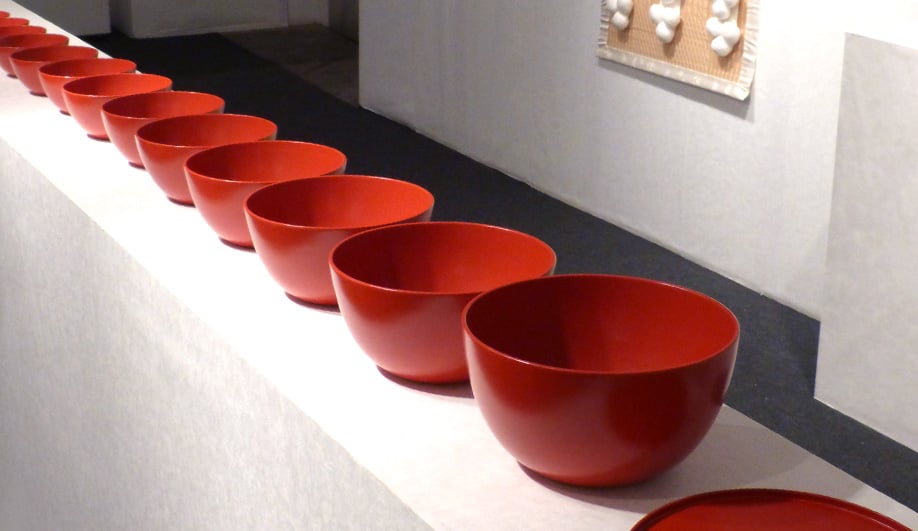 7 Matryoshka bowls
Korean craft also had its time in the spotlight. These matryoshka lacquered bowls that nest together – a design by Park Gang Yong and Jung Sang Gil – were the centrepiece of the group show. 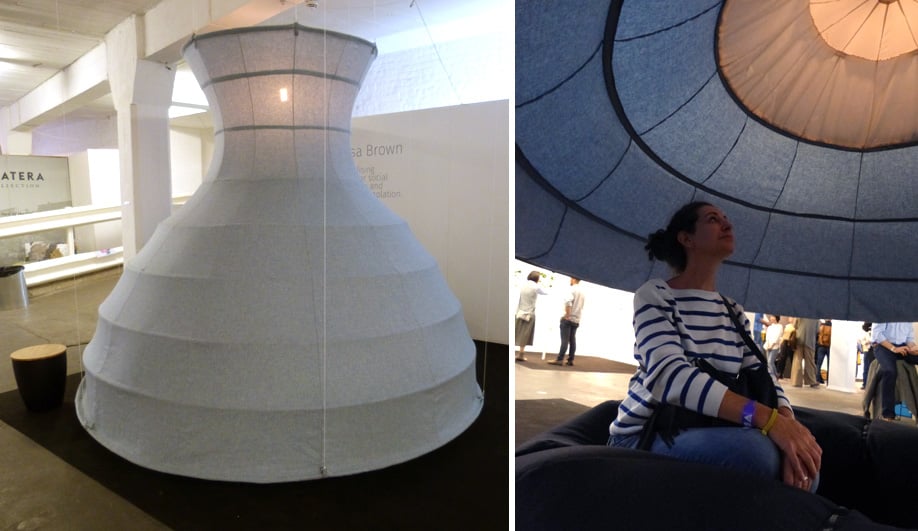 8 Tent by Tessa Brown
It’s more of a yurt, but Tessa Brown’s chill-out tent was an apropos addition to the Tent Show. I nestled into the donut-shaped beanbag base while Brown slowly lowered the cocoon around me. It felt weirdly unnatural to be in there while the show went on outside. 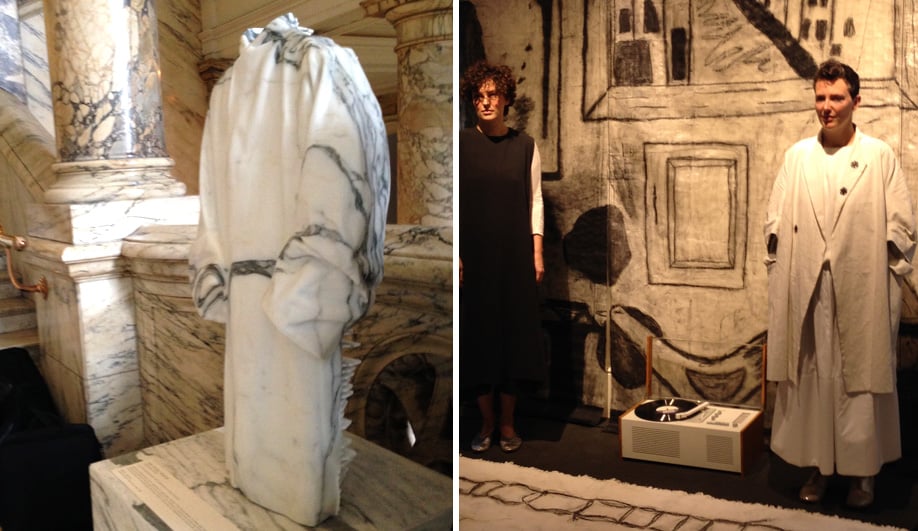 9 Faye Toogood’s Cloakroom
Faye Toogood seemed to be ever-present. At the V&A, she filled a pop-up “cloakroom” with 150 matching coats. Each had a different map of the museum sewn into the lining, and led the wearer to other “coats” she’d designed to match the environment: marble, tapestry, brick, metal.

Then, at Somerset House, she stood sentry with sister (and fellow designer) Erica in the Drawing Room, a canvas-cloaked salon where an analogue record player sang out with birdsong from her native Rutland and a clothing rack displayed several garments made (by Erica) with survival materials like gaffer tape, cardboard and plastic. “It’s a concept of an intimate space that unites all the things we work on,” she said. 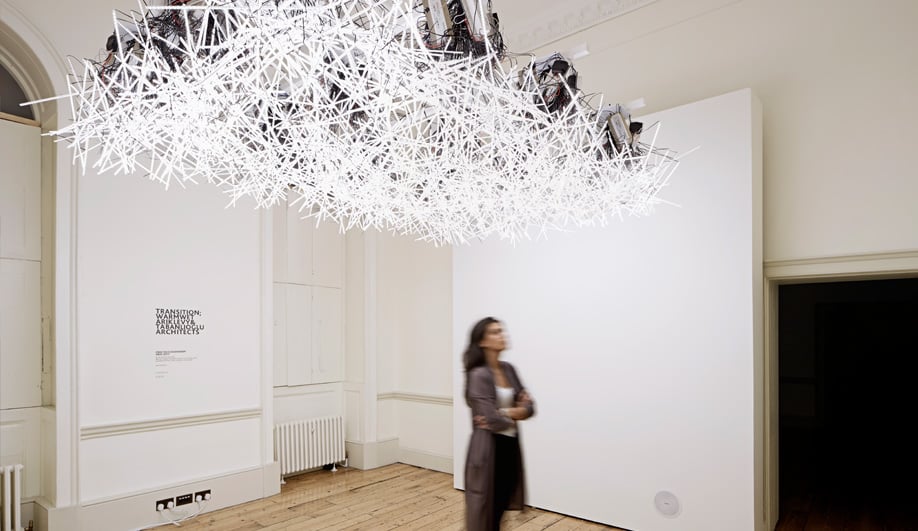 10 Transition Warm/Wet by Arik Levy and Tabanlioglu
Always innovating, designer Arik Levy and Turkish architecture studio Tabanlioglu presented Transition Warm/Wet at Somerset House. In one room, a pair of Teflon levers floated up and down – like a giant stairmaster in slow-mo – while a volunteer sprayed them with water. Next door, a ceiling fixture made from hundreds of buzzing fluorescent tubes gave the room warmth, life – and a dizzying effect. “You see things differently here because your eye has to adjust to the light level. The light is like a substance,” Levy told me. “The first room is about control, but this room is about letting go.” 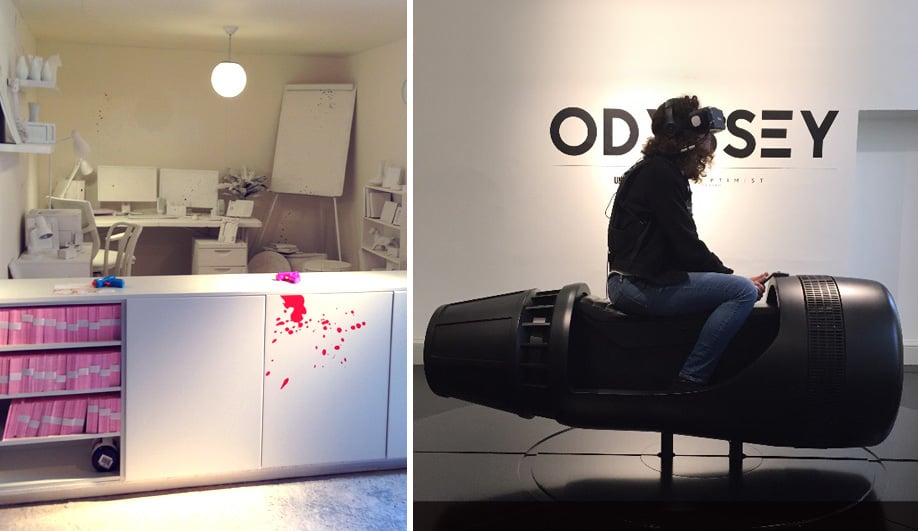 11 & 12 Tom Dixon’s Multiplex (left); Tino Schaedler’s Odyssey (right)
Tom Dixon’s pop-up Multiplex was a consumerist take on a 1960 Twilight Episode, in which a woman climbs to the ninth floor of a department store to find nothing there but the item she was looking for. Only here, a vacant building was transformed into a fully stocked department store – with merchandise handpicked by the designer. There were kiosks for local eyeglass brands and a new scent made, curiously, with wildflowers from Margate. Online printer Moo.com, the venture’s sponsor, had the best stand of all: a white-painted “office” that visitors could shoot at with paint guns.

At Somerset House, commercial designer Tino Schaedler and virtual reality outfit United Realities presented Odyssey. The two-minute “trip” involved strapping on an ocular rift headset, straddling a giant turbine and virtually blasting into space. It was meant as a teaser for our future lives – Schaedler says work, entertainment, shopping, even driving will require a headset that will “dematerialize life and take us inside digital spaces.” Yet, he adds, “everyone’s experience will be different – you’ll do your own ‘director’s cut.’” 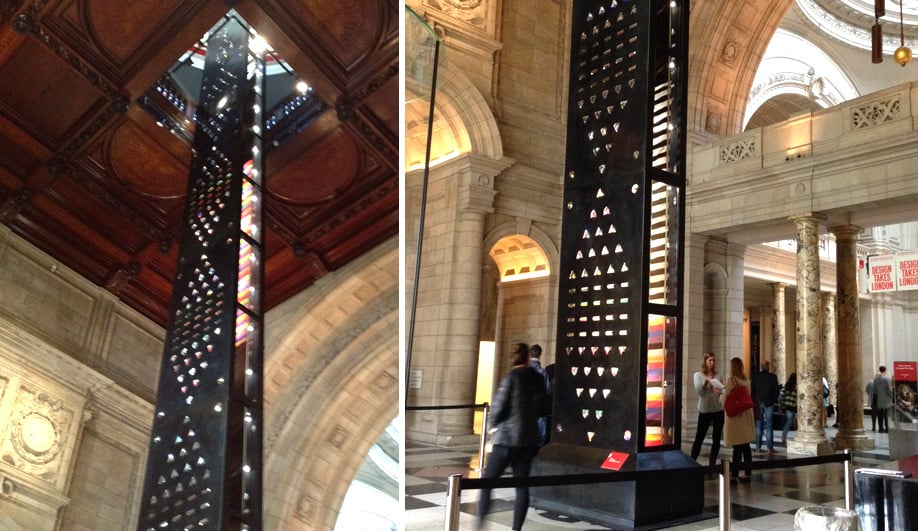 13 Kim Thomé’s Zotem
Norwegian designer and colourist Kim Thomé built a six-storey monolith called Zotem – an amalgam of “totem” and “zoetrope” – in the grand foyer of the Victoria & Albert Museum. He filled cut-outs in the steel frame with 600 Swarovski crystals and programmed them to glow in a variety of colours. 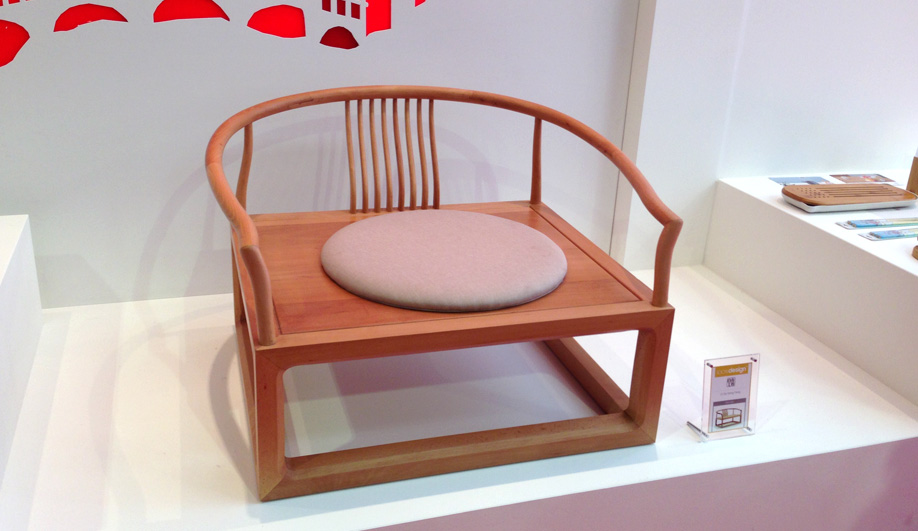 14 Zi Zai Gong Fang’s armchair
It’s always fun to see traditional craft and design reinterpreted with a contemporary twist. Zi Zai Gong Fang had fun with the Qing Dynasty armchair, and subverted tradition with a literal twist. Her furnishings were part of the “10 Top Chinese Designers” exhibit at 100% Design. 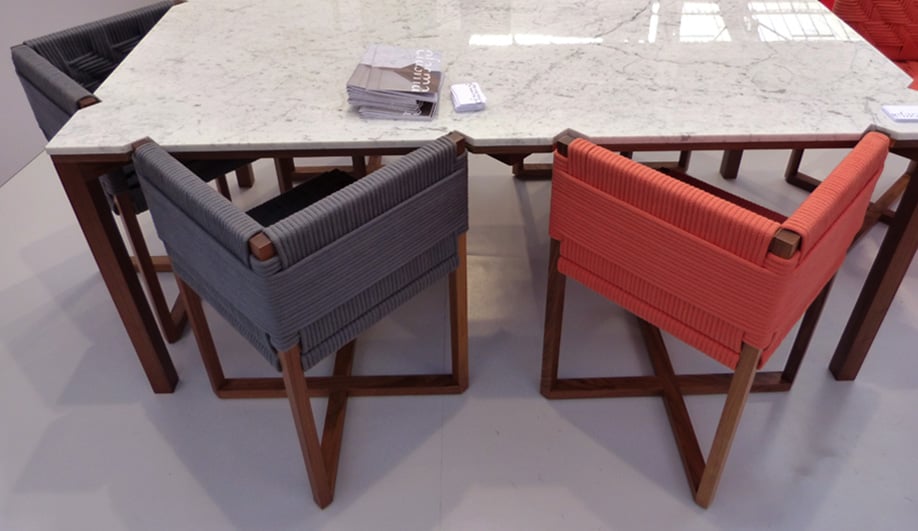 15 Dining chair by Efasma
This new dining range, designed by Bureau de Change and made by UK eco-manufacturer Efasma, was shown at 100%. It’s remarkably comfortable, whichever way your back is facing. And the notches in the marble-topped table are a clever touch.

16 & 17 Jon Burgerman for Kirkby Design (left); Moon loungers by Lina (right)
At Design Junction, New York artist Jon Burgerman signed doodlegraphs for his joint launch with Kirkby Design (a division of Romo). The range of 12 fabrics has shades of Keith Haring. Meanwhile, at 100% Design, Slovenia-based Lina created a chill-out space that promoted its Moon loungers. Taking a page out of the Uniqlo merchandising handbook, Lina brought in a rainbow of colours – and a line of Moon Small versions for kids. 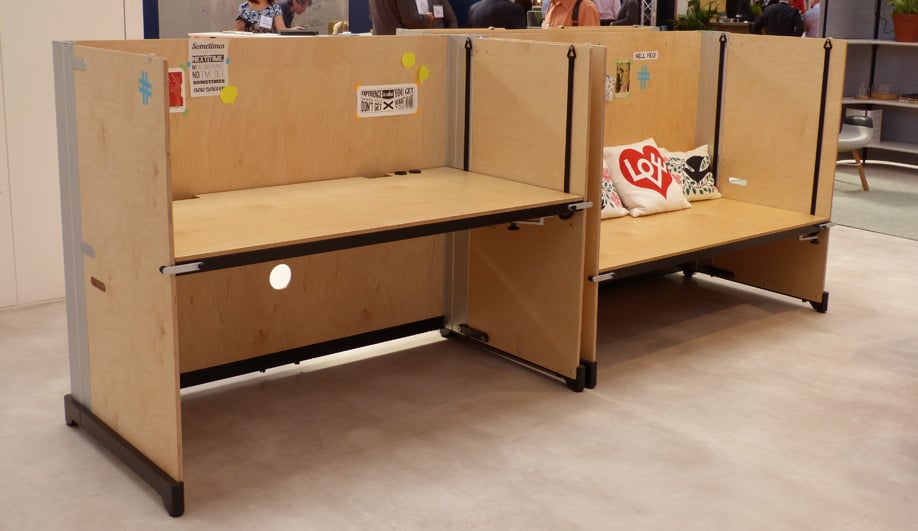 18 Hack desk by Vitra
How do you get the attention of a thousand frenzied buyers? Turn up Mark Ronson’s “Uptown Funk” to 11, and hire four hunky hands to convert your modular work-and-rest space to the beat. Vitra’s flexible unit, designed by Konstantin Grcic, has a dozen permutations, and they could all be revealed in the allotted 4:31. 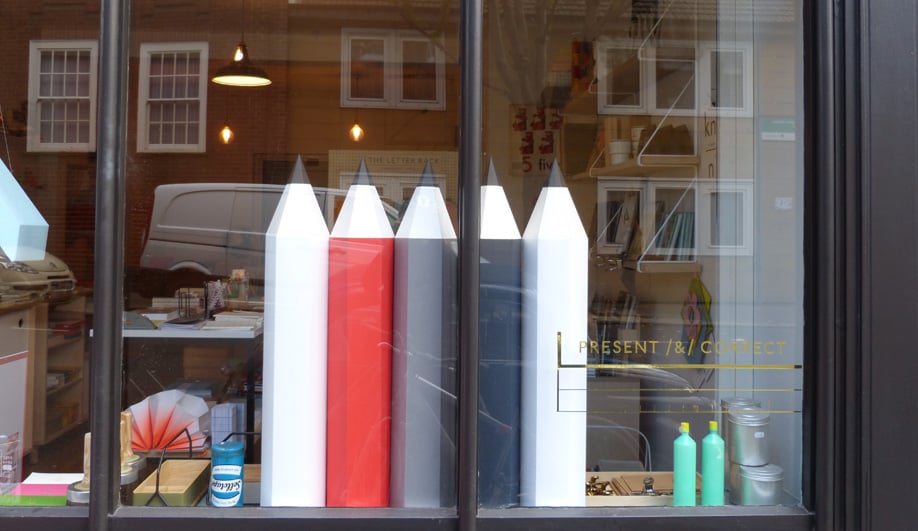 19 Present & Correct window dlisplay
The exhibition at papery Present & Correct was a line of multifaceted envelopes that could be mix-and-matched with note cards, stamps and stickers – but the real draw was the delicious window displays. 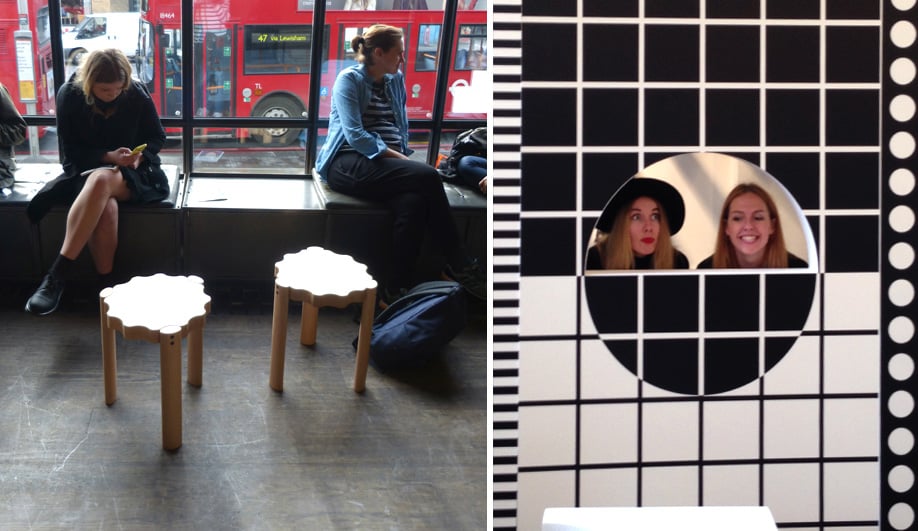 20 & 21 Ready Made Go at Ace Hotel (left); Patternity book launch
To spruce up its two-year-old premises, Ace Hotel commissioned a series of door handles, lights, ashtrays and other merchandise by designers like Tomás Alonso, Hilda Hellstrom and Studio Vit. The results were so well executed, they ended up forming an exhibition of their own: Ready Made Go. Stackable wood side tables by Canadian Philippe Malouin were put into rotation immediately. Meanwhile, Patternity’s Anna Murray and Grace Winteringham introduced their first book – Patternity: A New Way Of Seeing: The Inspirational Power Of Pattern – at a party rammed with A-listers, hipsters and monochrome models. Afterwards they launched their partnership with Paperless Post on an immersive peek-a-boo stage in Somerset House. The team produced a graphic collection of 10 virtual party invitations. 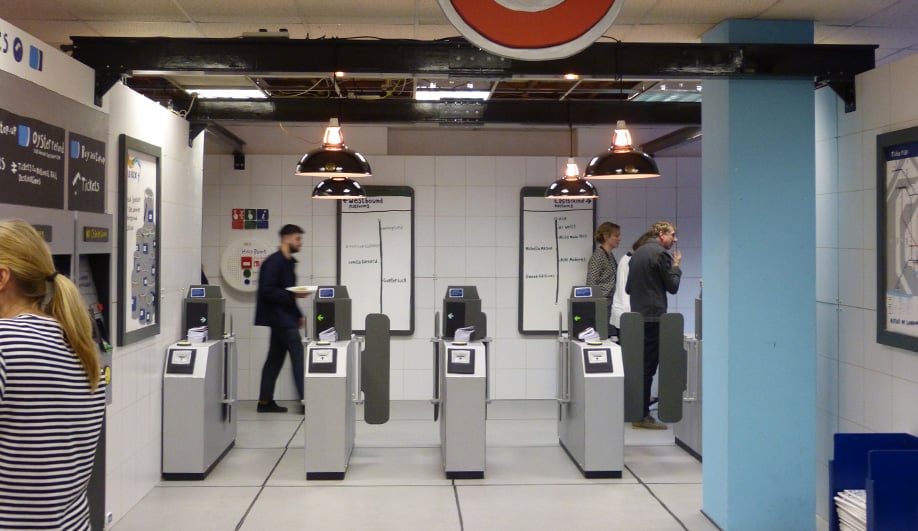 22 Camilla Barnard’s Tube station
London illustrator Camilla Barnard is a master of replicas, so organizers of Design Junction called her to mock up this Tube station in the downstairs bar area. She did it in top-to-toe timber, illustrating the detail by hand. After a few drinks, revellers were stumbling past the stiles, barely able to believe it was a fake. Slightly surreal. 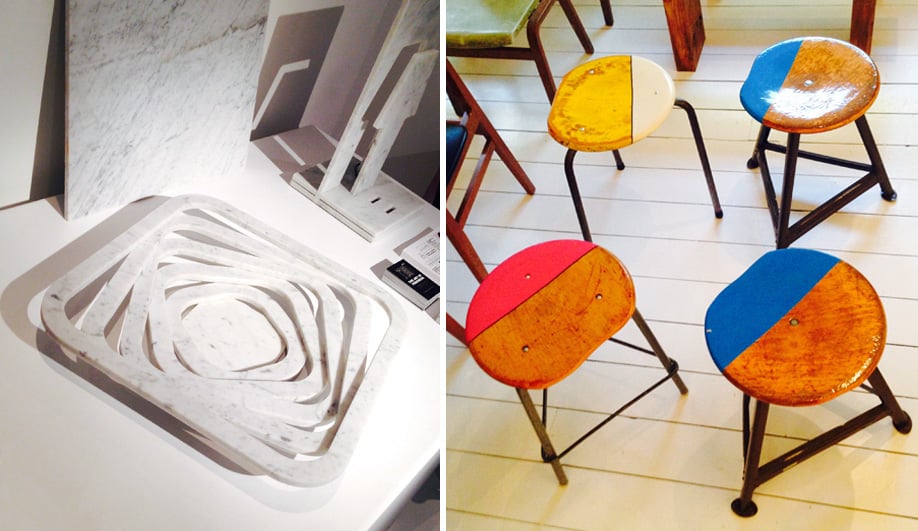 23 The Art of Progress
Onward to 19 Greek Street in Soho, where the four floors were arranged as an ethical-design think-tank, complete with solar table chargers, organic mattresses, a phone-free tearoom and a meditation corner. The Art of Progress featured refurbished stools by Markus Friedrich Staab and a 40x40cm marble tile cut into a fruit bowl by Moreno Ratti and Paolo Ulian. 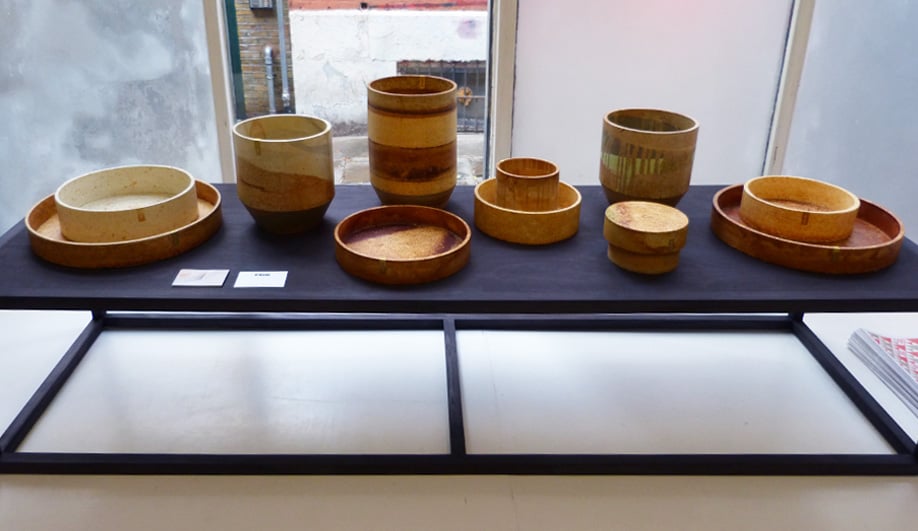 24 Tableware by Ariane Prin
By day, Ariane Prin works for Jasper Conran. By night she produces this tableware by mixing plaster and Jesmonite (the material du jour) with metal dust donated by her neighbourhood key-cutter. When left out in the air, the metal gradually oxidizes, creating unpredictable striated patterns. 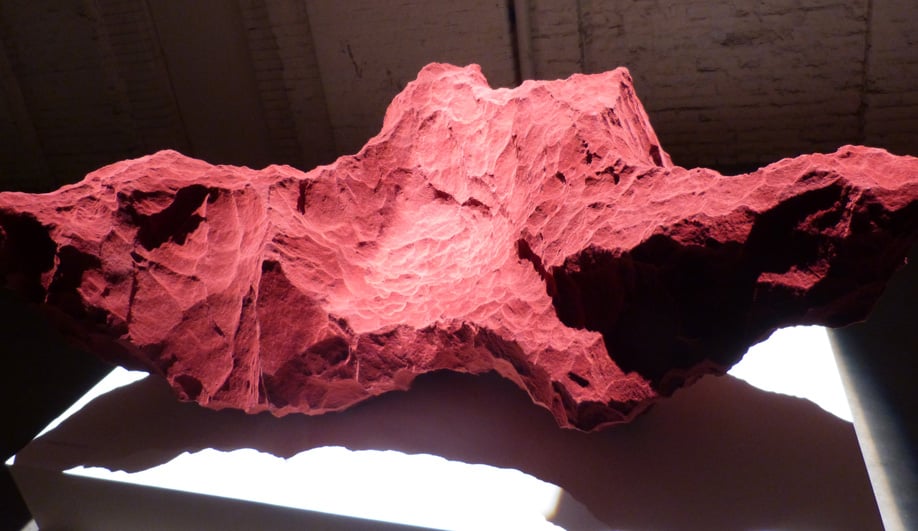 25 Fredrikson Stallard’s Momentum
Fredrikson Stallard opened their home-studio to the public for the first time this year. The occasion was Momentum, a show of otherworldly furniture that straddles the art-design divide. They crafted the Species sofa from a combination of polyurethane, glass fibre and polyester – like pink insulation that might dissolve in your grasp. The dark, dank warehouse space was a suitably theatrical venue.