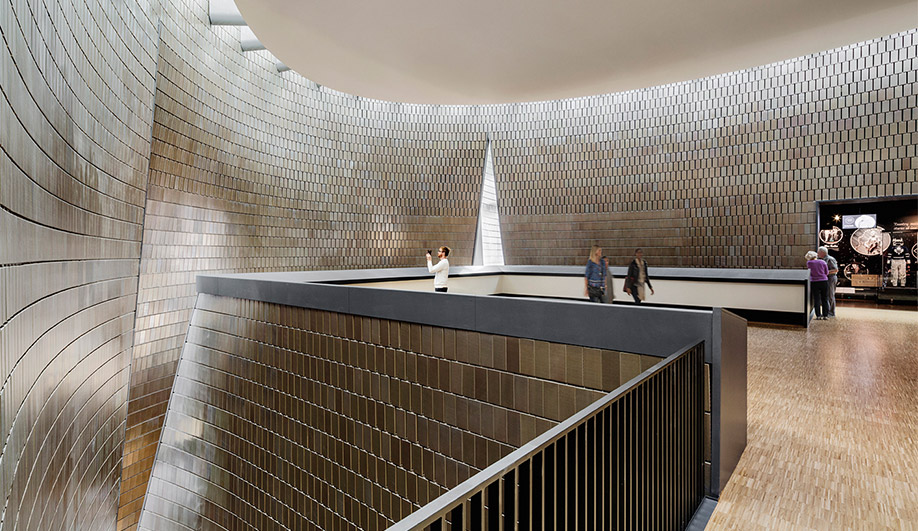 The view inside the bridge. 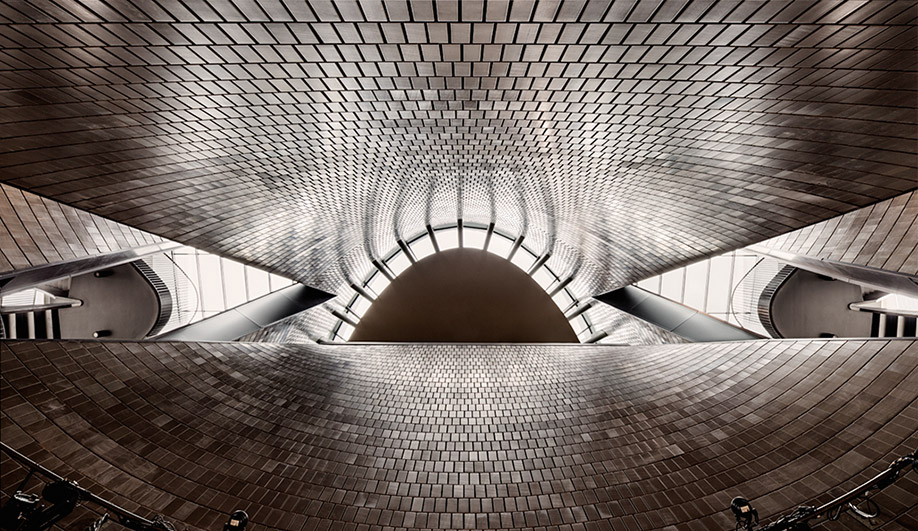 Looking up from the second-floor performance hall. 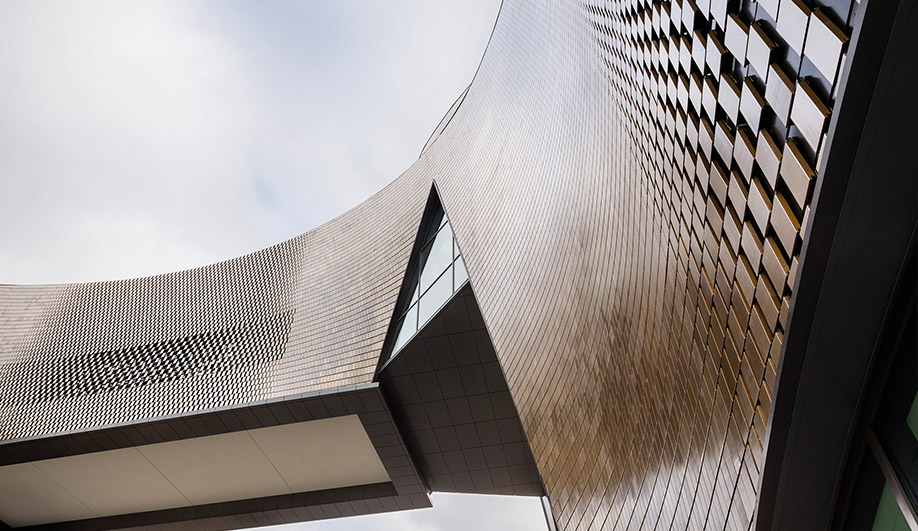 The centre’s western wall morphs into the bridge that rises 20 metres above street level.

Between Calgary’s skyscrapers and the confluence of the city’s two rivers stands Studio Bell, the dramatic new home of the first centre celebrating Canadian music history. With a curved western wall that morphs into a double-height bridge spanning Fourth Street SE, it’s not a building that will go unnoticed. It looms over and incorporates the King Edward Hotel, a beloved relic of the East Village. Originally built in 1905, the hotel served as a music-scene fixture through the 20th century, hosting such blues legends as Buddy Guy, B.B. King, and Pinetop Perkins.

The two buildings now house the National Music Centre, with Studio Bell a statement-making piece of architecture, especially in a city that has only recently begun a love affair with design. With a core full of bland office towers and surrounded by sprawling suburbs, Calgary has started to make way for signature projects, most notably a pedestrian bridge by Santiago Calatrava that crosses the Bow River. Snøhetta and Dialog have also broken ground on a public library that will straddle an LRT line, and Bjarke Ingels Group is inserting Telus Sky, a mixed-use tower slated to open this year. It sits next to The Bow, by Foster + Partners. Calgary is not yet an archi-tourism hot spot, but the ambition is there.

Angular openings between floors are reminiscent of natural rock formations. The openings, along with sound absorbing terracotta tile walls, help turn the centre into one massive concert hall.

Studio Bell, by Allied Works Architecture of Portland, Oregon, is poised to become a major cultural destination for the region. It holds its space with a sense of grandeur that hints at the prairie landmarks that inspired it. AWA principal Brad Cloepfil points to the hoodoo rock formations and grain elevators of Southern Alberta as key influences in what he describes as the “monumentality” of the building. For Andrew Mosker, president of the centre, the interior – with deep, V-shaped slices in rounded walls that reveal surprising views – recalls the crevasses of nearby glaciers. The endless curves can also be read as musical: soaring crescendos, sharp staccatos or fluid jazz movements. When trying to describe his initial vision, Mosker landed on the concept of the music festival. Cloepfil, he says, “was trying to get me to articulate the visitor experience so he could build around it, and that idea was a big breakthrough for us.”

There is no denying the centre’s complexity. Its five floors house galleries for a collection of musical-instrument-related artifacts numbering in the thousands, as well as space for recording facilities, workshops and a 300-seat performance hall. Cloepfil prefers to explain the navigation using a printout of computer-modelled shapes. Though it presents a unified front, the main building is composed of nine curved “vessels” linked by bridges on each floor. Each vessel plays host to a different musical exhibit, or “stage.” The walkways connecting them offer moments of relative silence.

Aluminum tubes are suspended above the performance hall.

From the lobby, the first eye-catching view is of the second-floor performance hall and its dazzling ceiling – row upon row of thin, luminous aluminum tubes. The atrium rises five stories, providing a variety of perspectives framed by swoops and angles. Guiding the first group of journalists through the space before the opening last October, Cloepfil himself would occasionally pause to admire a sightline he hadn’t previously noticed.

Sound quality was integral, so AWA turned to Jaffe Holden, the Connecticut acoustic consulting firm that has worked on some of the largest performance centres in North America, including the Lincoln Centre in New York. For Studio Bell, the interior walls are lined in the same iridescent tesserae used on the exterior; in total, the centre boasts over 200,000 glazed terracotta tiles developed by Royal Tichelaar Makkum in the Netherlands. When the acoustic wall of the performance hall retracts, most of the building fills with music. The tiled walls, backed with absorptive material, help soak up sound, while the building’s multiple openings reflect it upward. This is what gives the centre its music festival feel. No matter where you are in Studio Bell, you are always an audience member, hearing the music as it filters through the building.

The exhibit rooms, Mosker says, were designed with interactivity in mind: “NMC needs to be more than a stuffy museum.” For instance, in one room visitors listen to a selection of music through headphones, then write down what comes to them. Their thoughts are projected onto the walls. Elsewhere, a space full of synthesizers invites visitors to produce their own beats. The second floor charts the history of Canada’s music scene, from Joni Mitchell to Drake; and the fifth houses the Music Hall of Fame, where visitors can check out Stompin’ Tom Connors’ wooden stomping boards and Alanis Morissette’s harmonica, among other memorabilia. The NMC’s most hyped acquisition – the Rolling Stones’ Mobile Studio – resides in a room adjacent to the King Eddy, visible through huge street-facing windows.

Two main volumes are connected by a bridge that spans 35 metres across 4th Street. The much beloved King Edward Hotel, a former blues bar, has been restored and now houses offices, recording studios and spaces for artists-in-residence.

Cloepfil says that Studio Bell is the most complex project overseen by his firm, which is also behind the Clyfford Still Museum in Denver, and the upcoming National Veterans Memorial & Museum, slated to open in 2018 in Columbus, Ohio. One reason Allied Works was selected, says Mosker, was for its ability to elevate the local. “They build buildings of their place. If the building is going to be in Calgary, it has to have some connection to the city, its ethos, its history.”

The incorporation of the King Edward was a requirement set out by the NMC from the beginning. When the landmark was condemned in 2004, there was public demand to save it; at the same time, Mosker was searching for a new home for the NMC. Before construction began on Studio Bell, the King Eddy was taken apart and put into storage. It was then reassembled, brick by brick, and integrated into the complex as a performance venue.

Studio Bell’s mix of old and new is at the heart of the project; it signals the revitalization of the historic East Village while also making an empowering statement about the city’s future. Calgary once had multitudes of buildings just like the Eddy, but this heritage was sacrificed during the wild oil-boom periods. That the hotel has been spared the wrecking ball is a testament to a new way of thinking.

Cloepfil believes Studio Bell could only have happened in the West, where there is more appetite for freewheeling ambition, and where the younger, less developed metropolis isn’t as constrained as its older counterparts. “It’s full of possibilities,” he says. “I believe in the Western myth.”

SHARE
Twitter, Facebook, LinkedIn, Pinterest, Email
TAGS
Architecture, Canada, Cultural,
AZURE is an independent magazine working to bring you the best in design, architecture and interiors. We rely on advertising revenue to support the creative content on our site. Please consider whitelisting our site in your settings, or pausing your adblocker while stopping by.