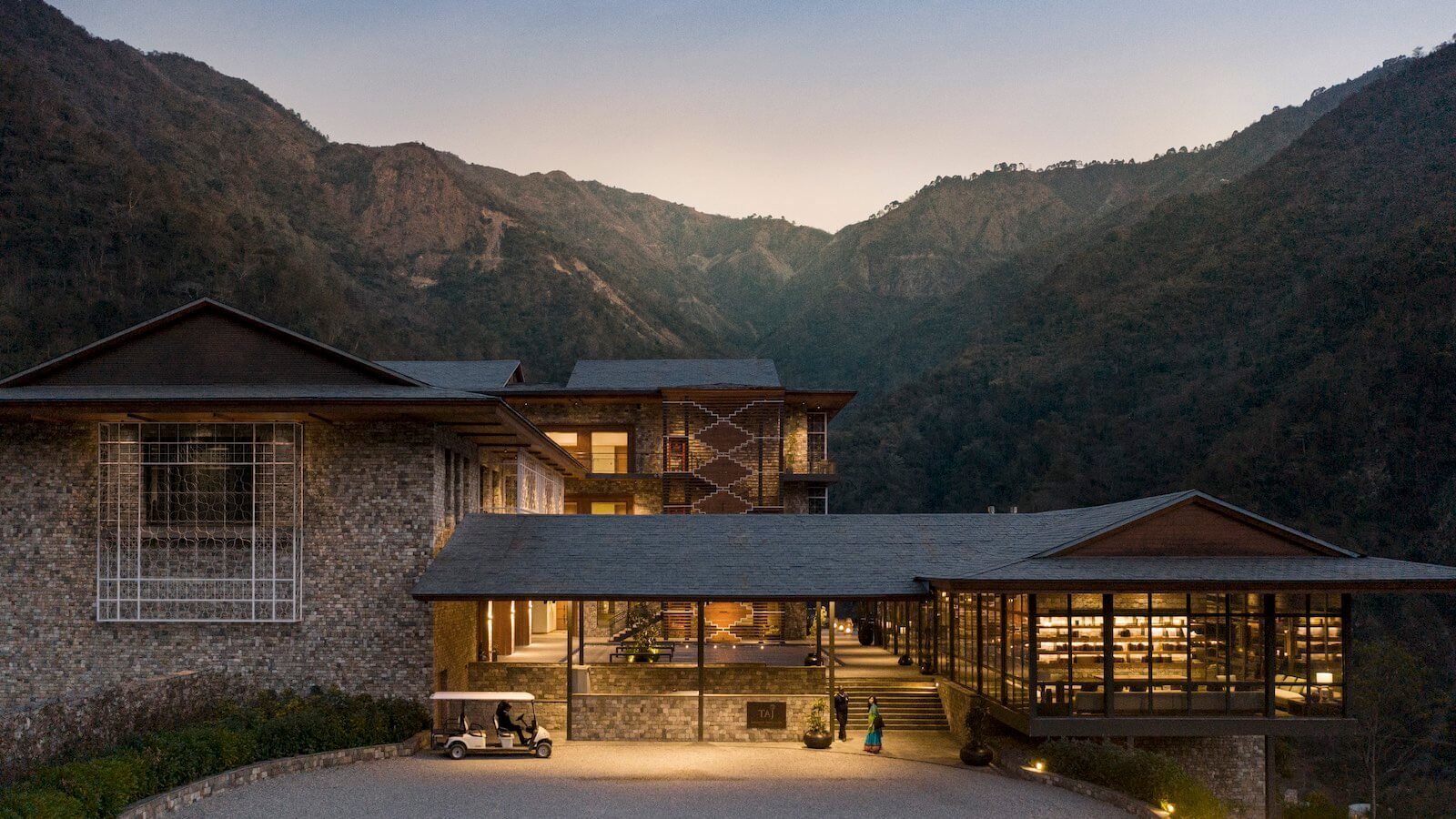 In Rishikesh, a resort and yoga retreat by yh2 and Edifice consultants opens up to the Ganges River.

The northern Indian state of Uttarakhand is a mountainous, forested landscape in the heart of the Himalayas. Capped by dramatic peaks and glaciers, Uttarakhand’s melting ice and snow nourishes the source of the Ganges River. On the Himalayan foothills, just beyond the riverside city of Rishikesh, the state’s natural and cultural heritage is evoked in a tranquil new resort and yoga retreat.

A collaboration between Montreal-based architects yh2 and Mumbai’s Edifice consultants, the Taj Rishikesh Resort & Spa sits on a bucolic mountainside site overlooking the Ganges. Situated outside the urban centre of a city informally dubbed the “Yoga Capital of the World,” the Taj Rishikesh takes inspiration from the region’s traditional Darbargadh palaces, which served multiple functions as temples, fortresses and residences for the local rajas.

The complex also draws on the region’s Kath Kuni construction technique, which incorporates long cedar beams and stone walls to create a mortar-free — yet exceptionally study — structure. According to yh2, “the architecture of the project takes advantage of the materials found locally: river stones for the retaining walls, slate for the roofs and flooring, and large wooden frames for the joinery.” However, with the exploitation of Himalayan cedar now banned, the designers turned to steel for the long beams that hold up each structure’s roof.

The 14,000 square-metre resort harnesses the spatial configuration of Darbargadhs to foster a very different — though similarly varied — layering of experiences. Organized around a central courtyard, a series of discrete villas stretches out across the generous site’s rolling terrain.

Emerging onto the walled courtyard, a central block houses the resort’s main services, including the reception, a restaurant, bar, hotel shop and library.

The consolidation of busier spaces around the courtyard allows for a quieter, more private ambiance in other parts of the resort. Set into the landscape — with stone retaining walls carving out a walking path — a sinuous trail leads down to the lower-lying villas, culminating in a series of yoga and spa pavilions, a tranquil restaurant and swimming pool overlooking the Ganges.

Developed in collaboration with landscape architects Burega Farnell, the contemplative gravel trail is a quiet centrepiece of the resort, with both the path and pavilions carefully contoured to open up views of the majestic Himalayan landscape. Taj Rishikesh promises an experience where — in its best moments — the architecture beckons to the river and disappears into the mountains.

In Rishikesh, a resort and yoga retreat by yh2 and Edifice consultants opens up to the Ganges River.