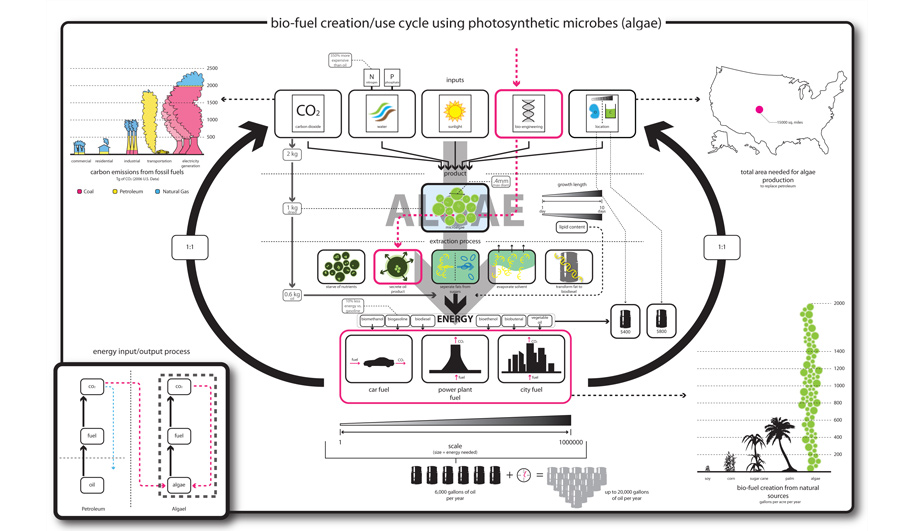 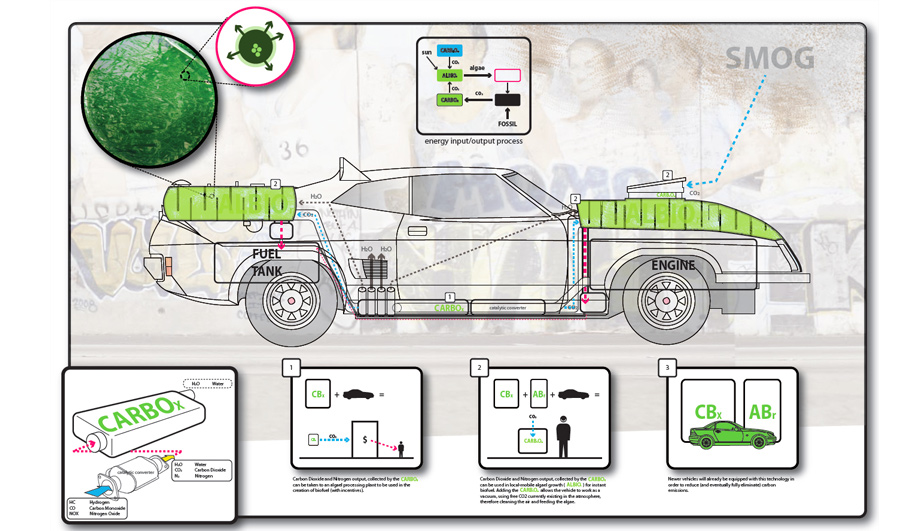 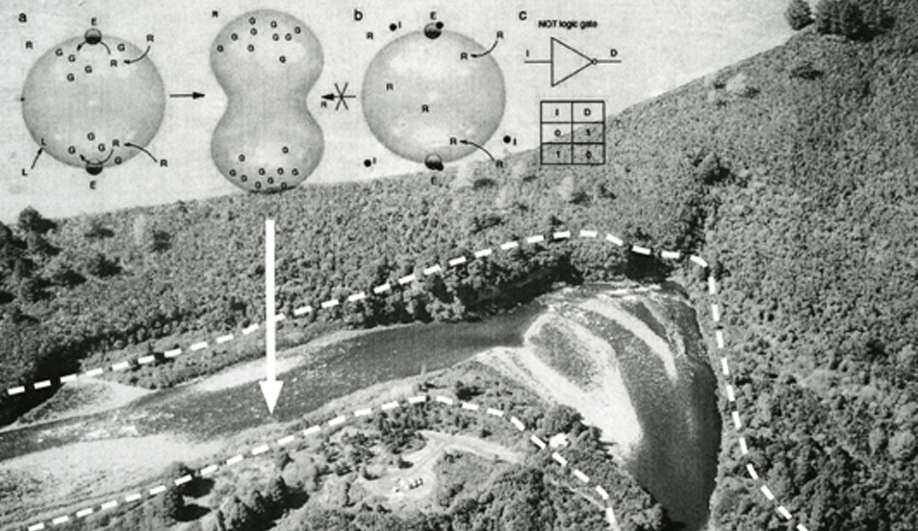 Along with his partner at The Living, architect Soo-in Yang, Benjamin has already created paradigm-shifting projects, such as Living Light, an interactive canopy in Seoul that reacts to air quality; and Amphibious Architecture, which communicates the level of pollution in New York’s Hudson River. These projects entice people to participate in their environments in new ways, while making them aware of how they’re constantly changing.

At the Conversations in Design symposium hosted by the Interior Design Show in January, Benjamin spoke on the theme of crowd-sourcing as it applies to his firm’s projects as well as those by his students at Columbia University. Benjamin and his colleagues at Columbia developed a framework for students to share architectural tools, and he’s also created a new class exploring synthetic biology in architecture – a subject he’s been immersed in since participating in the National Science Foundation-funded Synthetics Aesthetics Project.

Azure sat down with Benjamin to discuss the brave new future of green architecture.

Why architecture needs to go beyond the blank page

In my teaching at Columbia Graduate School of Architecture, Planning and Preservation, I emphasize collaboration and open source design. This challenges the model of the architect as solitary genius and also the notion that each building has to be a one-off.

In the C-BIP [Columbia Building Intelligence Project] Studio that I teach with Scott Marble and Laura Kurgan, we created a framework for students to work individually to design a database of small-scale building elements, and then work in teams to combine a selection of elements into larger building designs. The teams start with modules of re-usable design intelligence rather than with a blank page, and they pick up where previous studios left off, rather than re-creating everything.

How synthetic biology can solve many persistent problems

Synthetic biology is a radical form of genetic modification. It is a new approach to designing new biological systems not found in nature. And some people say that in the near future, this technology will be the way we make everything, from medicines to fuels to buildings.

One example that is now being commercialized is a new anti-malaria drug. Synthetic biologists designed a way to combine 12 sequences of DNA never found together before and to create a new strain of yeast that could essentially churn out the anti-malaria medicine in a laboratory – without the use of the rare sweet wormwood plant. The new medicine is more pure and ten times cheaper than the old medicine, which means it could save millions of lives.

From the beginning, synthetic biology has been based on a framework from the field of electrical engineering. The idea is that if synthetic biology can develop a catalog of standardized biological parts – like transistors and capacitors in electrical engineering – then there can be a division of labor. Some people will be able to work on making new parts while other people will be able to work on combining the parts into devices and systems. This will allow for the creation of new medicines or new fuels or new building materials without starting from scratch.

This has some clear similarities with our database of building elements, but it potentially involves a wider spectrum of participants. The framework of synthetic biology may allow non-specialists – like architects, artists, computer scientists – to design new biological systems without learning all the details of molecular behavior. Just as non-specialists now combine electrical parts to make electrical circuits, soon they might be able to combine biological parts to make new organisms that perform specific functions. As biological technologies become less expensive and more domesticated, this may lead to an explosion of innovation similar to advances in computers after the domestication of digital technologies in the ‘70s and ‘80s. We may be at a transformative moment now, like the days of Apple Computer tinkering in the garage.

How synthetic biology can inform architecture

But so far, very few architects are working in this area. I am the only architect among six pairs of scientist-designer collaborators in the Synthetic Aesthetics Project, which involves conducting joint research (with funding from the National Science Foundation in the U.S. and the Engineering and Physical Science Research Council in the U.K.) with plant biologist Fernan Federici in the Jim Haseloff Lab at the University of Cambridge, U.K. We are experimenting with synthetic biology and architecture in a real lab with all of the standard safety protocols.

Then at Columbia, we are creating an advanced architecture design studio to teach architecture students to conduct experiments and design with biology. This is part of a new lab I am starting at the School which will conduct long-term research on the intersection of architecture, synthetic biology, and computation. We have just started to work with a software company to develop new computational tools for architecture and synthetic biology.

Why we need to re-think “nature”

We definitely have to be careful with this technology for designing new living systems, but it’s not unprecedented from a philosophical view. First, people have been manipulating nature for thousands of years. Second, the technology’s already out there and the best way to deal with the risks is probably to increase awareness and knowledge, rather than outlawing it, which would just push malicious projects underground. Third, what’s most crucial for me – and this relates to Amphibious Architecture [developed by Benjamin and Yang at the Living Architecture Lab at Columbia, in collaboration with Natalie Jeremijenko] – is that the “do nothing” approach is not always the safest approach. In New York, the rivers have been damaged by years of pollution and development, and some public agencies say it’s best to do nothing at this point. But it’s actually better to remediate and experiment in order to re-engineer a viable eco-system, to re-introduce species, to build special reefs and piles so mussels and oysters can grow. In the case of synthetic biology, there are many urgent problems that the new science might be able to address. I’m not blindly faithful in technology, but I think at this point the benefits of synthetic biology far outweigh the risks.

How we will one day grow our buildings

Some of the first applications of synthetic biology and architecture may involve high-performance materials like carbon-sequestering concrete and self-healing silicone. But in the future, architects may be able to program the DNA of a seed so that it grows into a building. Then, instead of architects designing plans and sections, instead of bringing all of the construction materials from the factory to the site, architects might be able to design rules for growth and differentiation and material performance. And the new biological machine – the living building – might be able to use the nutrients of the land and the natural ecosystem to do both the factory manufacturing and the site construction.

In some ways, it’s tempting to wait until the technology becomes more advanced before we get involved as architects. But if we wait too long, there’s a risk in that too. Architects should help think about the frameworks and the protocols and the potential applications of synthetic biology. Architects should engage in the discussion about risks and utopian visions and design tools before these things get frozen and the design palette gets limited.

The thing that ties it all together for me is this sinking feeling I have that we’re at this crucial moment where we know what the stakes are, and what we need to do, but we aren’t acting. We’re still not acting intelligently about the crisis of climate change. Of course, a large part of our response as architects must be to aggressively use all of our known and existing strategies to increase the environmental performance of buildings. But I also think some architects should be searching for radical new strategies that might change our idea of what’s possible. Some experiments may fail, but some crazy ideas – like combining architecture and synthetic biology and growing buildings – may eventually change how we think about architecture, and how we live, work, and come together in cities.

1. This creation of a new system of biofuel – with 80% less carbon emissions than petroleum fuel – involves design at multiple scales simultaneously, from DNA with a radius of about a billionth of a meter to the planet with a circumference of 40 million meters. (Nathan Smith, Bio Oil Workshop, Columbia GSAPP)

3. As it becomes possible to design cells as tiny, self-replicating computers, new forms of data processing and storage may emerge, such as embedding computing invisibly in our lakes and reservoirs. Cloud computing will become river computing. (Mike Robitz, Architecture Bio-Synthesis Class, Columbia GSAPP)