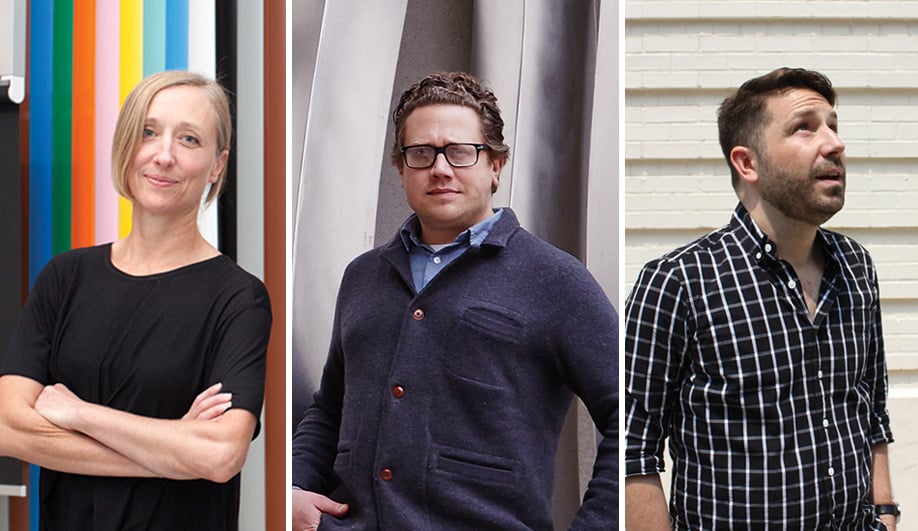 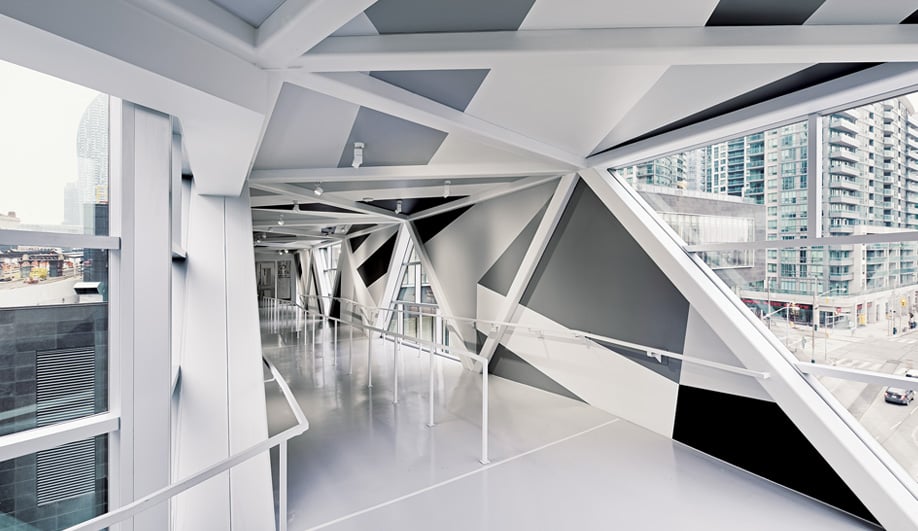 SFC Bridge, 2015: Inside and out, the elevated pedestrian pathway is defined by a duotone pattern of triangles and diagonals that mimics its trapezoid construction. Made of aluminium and glass, the sloping route takes a sharp turn at the halfway point, connecting the Metro Toronto Convention Centre to the Delta Hotel. 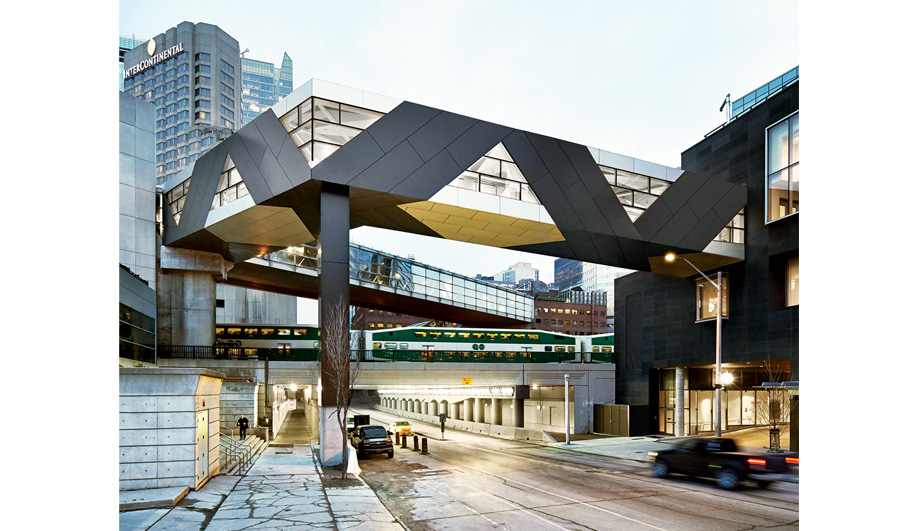 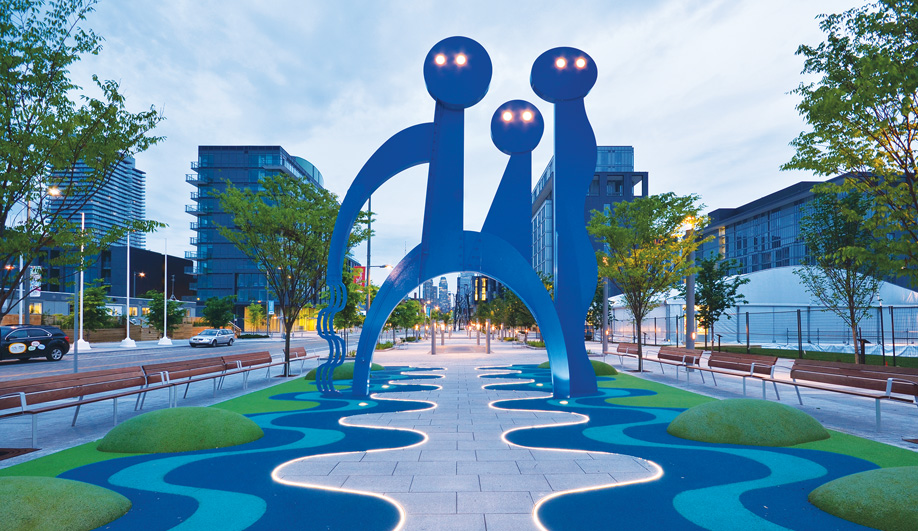 The Water Guardians, 2015: Standing 7.2 metres tall, these steel-cut blue figures with illuminated eyes form a playful archway along a main boulevard in the Canary District. Rubberized blue and green mounds in the shape of running water provide a child-­friendly soft surface. 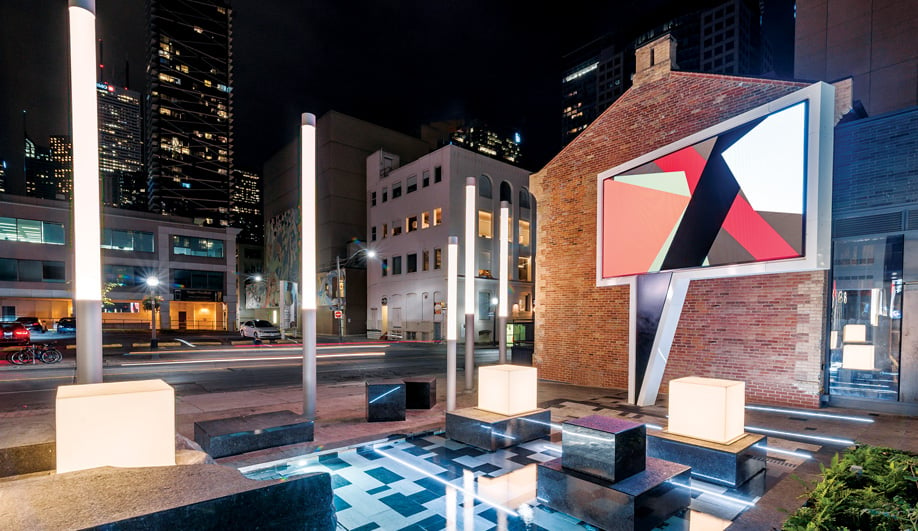 Speech Bubble, 2015: The latest of three projects to go up in Toronto, this one stands in a parkette on John Street. To avoid the problem of flat screen tech­nol­ogy dating the piece too quickly, the monitor is surrounded in a white frame like a cartoon bubble. The abstract animated video, also by the artists, traces a timeline of art history. 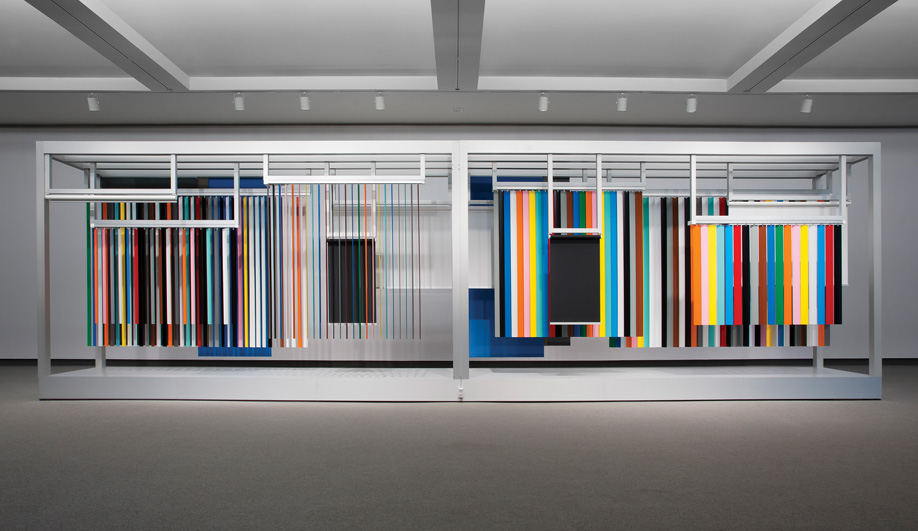 Pavilion of the Blind, 2013: First presented at the Tierney Gardarin Gallery in New York, the installation contains an array of window blinds triggered by a motion detector. Their continual arranging and rearranging creates an endless series of colour-rich compositions. 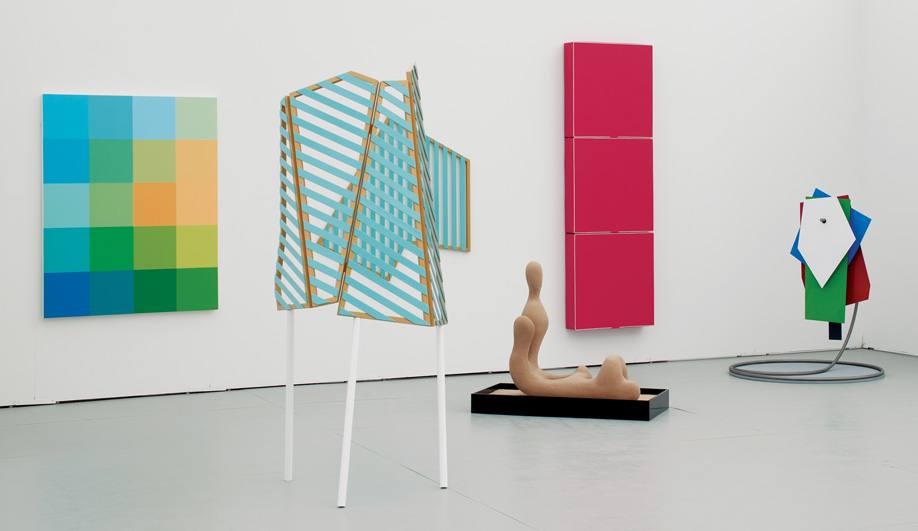 We Built Excitement, 2012: Since art school, Borins and Marman have developed art pieces that are ambitious in scale and rooted in art history, though with added popular twists. For their sculptural exhibition We Built Excitement, the title riffs on an old Pontiac jingle from the ’80s. 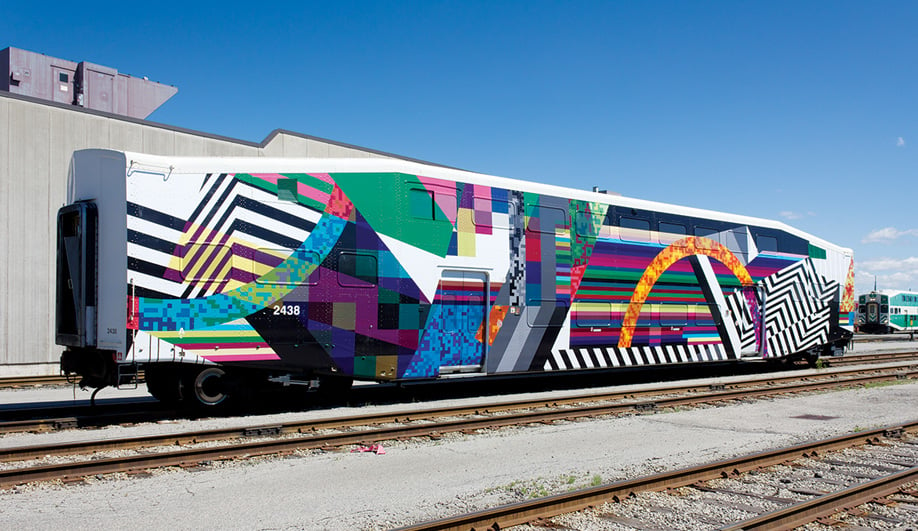 Art Train Conductor no. 9, 2012: For a project that encouraged commuters to discuss sustainable transit options, Borins and Marman were invited to vinyl-wrap a GO Train car. The vivid patterns carry into the interior spaces, covering the ceiling and floor. 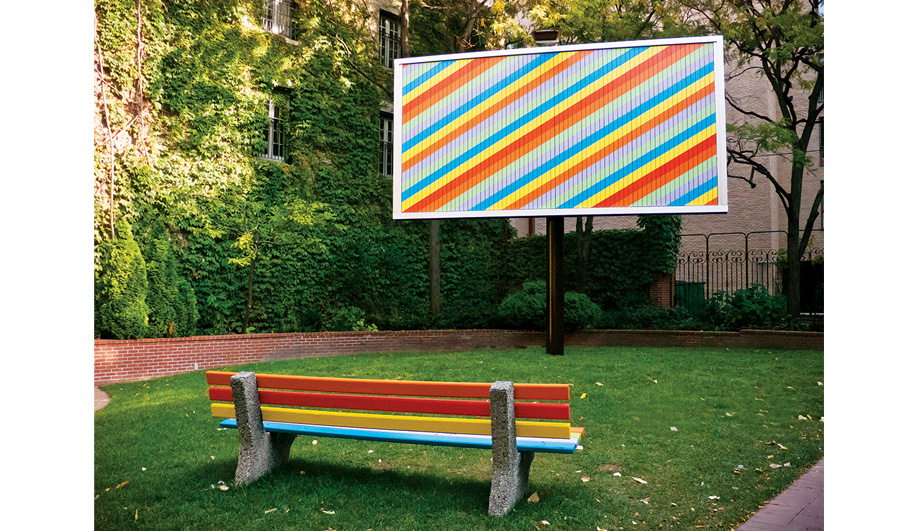 In Sit You, 2006: Many of their ongoing concepts can be traced back to the first public art commission, which saw a motorized roadside billboard installed in a small city park. Visitors were invited to take a seat on a matching bench and become part of the op art as it flipped every few seconds.

A team of three – two artists and an architect – is making waves in Toronto’s public art realm and the built environment.

Amid Toronto’s ongoing densification, an elbow-shaped overpass has gone up, providing an elevated shortcut 46 metres long between the Metro Convention Centre and the Delta Hotel. For a city in deep-freeze at least four months of the year, it’s surprising that there aren’t more covered routes like it, rising above the traffic and letting the walking masses experience sub-zero temperatures through windows instead of wind tunnels. SFC Bridge is also visually striking – more art than architecture. Two of its creators, Daniel Borins and Jennifer Marman, are better known for their gallery installations, but public art has formed a part of their practice for years. In the past 12 months, they and their newest collaborator, James Khamsi, have added three commissions to the urban landscape.

Backstory
Borins and Marman met 15 years ago, at the Ontario College of Art and Design University. There, they collaborated on interactive projects that required more than one person to realize, on a scale beyond what most commercial galleries had room for. Their first public installation, In Sit You (2006), utilized a tri-vision billboard, the kind typically seen alongside a highway, and mounted it inside a tiny city park. The ads were replaced with strips of bright colour that changed angles with each rotation. A matching striped park bench invited visitors to immerse themselves, quite literally, in the project and contemplate the morphing op art as if watching TV.

Toronto’s subsequent condo boom has brought with it a keener interest in energizing the city through art, and Borins and Marman have grown right along with the changing tide. In 2012, as part of a city-wide discussion of public transit, they were invited to wrap a commuter train car with vivid abstract graphics. A year later, a municipal directive mandated that developers commission artists to enliven construction sites. The regulation led them to create a colourful, 10-metre-long abstract work on a stretch of hoarding on Bloor Street, not far from the Royal Ontario Museum. They based the graphics on a timeline that traced the history of the area, from prehistoric times to the present.

Tipping Point
In 2011, a serendipitous meeting at a gallery opening brought New York architect James Khamsi into their practice, and gave them a chance to work more closely with architects and builders during the development stages. Khamsi shares their interest in optical effects, and, more importantly, he says, “We all agreed on site specificity as an important aspect of public work.” Borins concurs: “We’re more about context building than intervention.”

The partnership has culminated in three new works, including the SFC Bridge, which presented numerous structural challenges, given its sloping path and mid-air turn – geometries they’ve exploited by exaggerating them with black and white zigzags that mimic the inner structure. “We treated it like a painting scheme, to echo the trusswork and unsettle the interior,” explains Borins. Meanwhile, Khamsi has been tracking the response to the bridge on Instagram, where skateboarders and fashion­istas are finding it to be an ideal photo backdrop.

Water Guardians, their second project, is a trio of ominous yet welcoming sentinels installed in the Canary District, Toronto’s massive multi-use redevelopment project along the waterfront. Made of cut metal and standing 7.2 metres tall, the blue giants keep watch with glowing LED eyes. “We were asked to create an outdoor living room,” says Marman. “It had to be something playful that appealed to children and families but wasn’t a straight-up park.”

A similar response to the local community is at work with Speech Bubble, an installation mounted last summer within a multimedia park­ette on John Street, designed by local landscape architecture firm Janet Rosenberg & Studio. The developer wanted to incorporate an LED screen, but the artists, wary that the technology would date the work, morphed the screen into a universal symbol – the cartoon speech bubble – by adding a white frame, then combining it with a slow-moving animation that gradually traces the history of hard-edged abstraction. “We’re adding to the animation on an ongoing basis,” says Borins, “and we’re now at the 1930s.”

What’s Next
Speech Bubble also serves as a bookend to what began almost a decade ago with In Sit You. Despite the intervening years, both projects engage the public through mechanisms of mass media stripped of commercial content and infused with art and pure colour.

Oddly, the team’s first public commission, in 2007, is just now reaching the construction stage. Part of the new Downsview subway station, their latest is a steel sculpture that turns Buckminster Fuller’s geodesic dome into a giant dandelion with seeds dispersing into the wind. “We want to get more involved with cultural master planning,” says Borins. “Toronto is building entirely new neighbourhoods of 10,000 to 30,000 people at a time. We’re hoping that a cultural sense can prevail, where we can have a voice in what we think works, what we think is vital.”