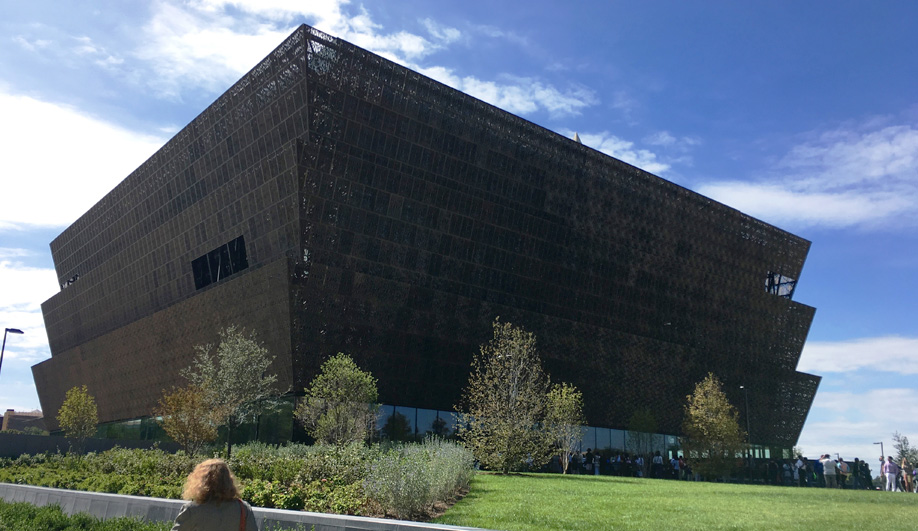 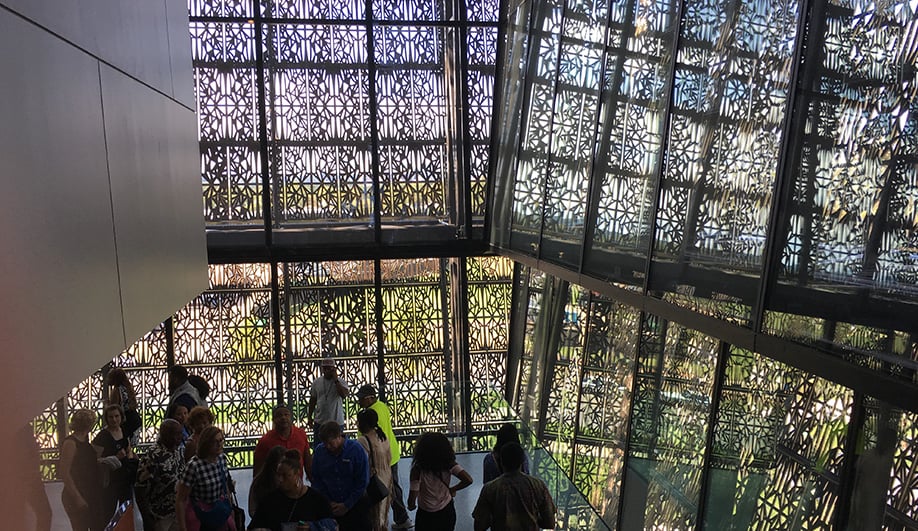 For many people, it seemed as if the NMAAHC would never open. The seed of the idea began as far back as a century ago; it became more real when the Bush government approved the building plan. But financial setbacks, as well as sticky bureaucracy between officials, historians and the Smithsonian museum, have made the journey to build the last museum on the National Mall a long and onerous one. When a four-firm team led by Tanzanian-born British architect David Adjaye won the international competition, beating out such top firms as Foster + Partners, Moshe Safdie and Diller, Scofidio + Renfro, Adjaye was 43 years old. He’s now 50.

All that seemed to be forgotten during the inauguration event held on September 23, when a star-studded list of politicians and celebrities – including President Barack Obama – officially declared the museum open. Getting tickets for opening day was nearly impossible, and advanced tickets sold out well into November only hours after they were made available online.

The collection of artifacts on view represent some 400 years of African American history, from slavery and the Civil War to Oprah Winfrey’s media domination and Obama’s presidency. A large portion of objects have been donated from private collections, and have never been seen publicly. They include such emotionally charged objects as iron shackles worn by slaves, civil rights activist Rosa Parks’ dress, and the coffin of 14-year-old Emmett Till, who was lynched to death in 1955 for supposedly flirting with a white woman. 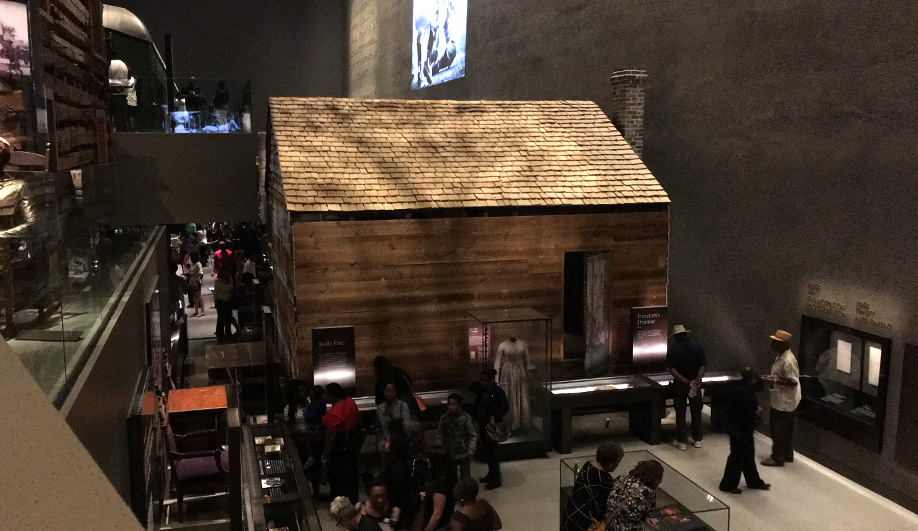 While most people are clamoring to see collections, the building – designed by Freelon Adjaye Bond/SmithGroupJJR – is worth a visit all on its own, and hasn’t suffered from the usual love-hate opinions that come with statement-making buildings. Everyone seems to like it, from the critics to the visitors in line opening day who came from across the country to be part of the event. They are impressed by its unique upside-down pyramid shape, and golden-brown cladding that doesn’t look anything else in Washington.

Usually, those kinds of differences make people wary. Not this time. A day before the opening, the sky was cloudy and the lacy cladding, which is made of bronze-coated aluminum panels, looked more like solid armour. At night, the interior lights turn it into a flickering lantern, and during the day, the sun casts a warm glow that gives it the look of an exotic vessel. Surrounded by neoclassical buildings and the National Mall’s trimmed lawn, it reads as a regal crown rising from the ground.

The building’s three-tiered shape derives from a headpiece carved on a wooden figure by Nigerian folk artist Olowe of Ise, which is installed on the top floor exhibition space. The building’s ornate cladding pays homage to the detailed ironwork found in Louisiana, made by free and enslaved craftspeople. 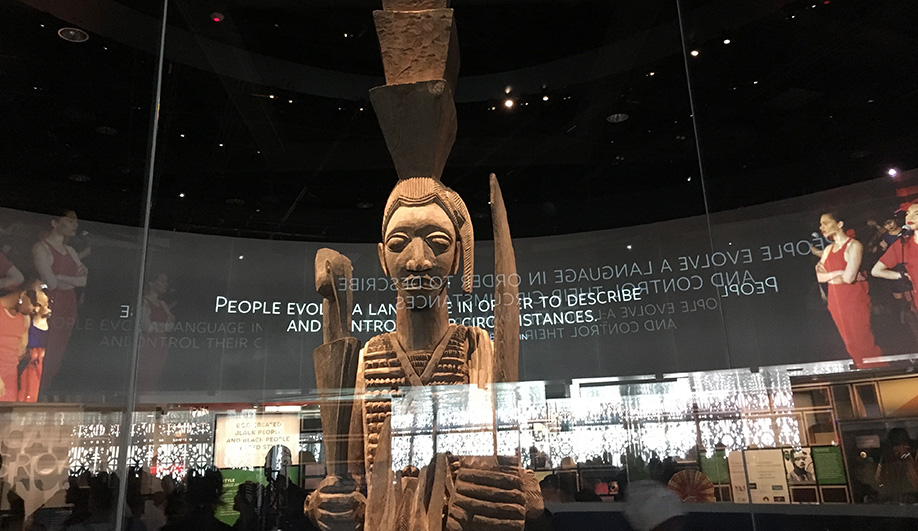 The museum’s three-tiered shape was inspired by the headpiece carved on a wooden figure by Nigerian folk artist Olowe of Ise.

Inside, the museum comprises three floors above and three below grade, with the elevators, escalators and ramps located along the outer edges. The escalators give visitors the best opportunity to see the outer skin close up, and to figure out how its 3,600 unique panels mounted to a steel-and-glass framework have been put together. The ride up or down is a like a pause button between floors where, for a moment, you can look outside through the cladding to the surrounding buildings. The effect is stunningly beautiful and tranquil, like looking toward an open landscape through tree leaves, and few can resist the urge to take a picture of it.

It is immediately evident that one reason it has taken the museum so long to open is the job of figuring out how to display centuries of history in comprehensive, informative and entertaining displays. The results are impressive. It’s equally rewarding to wander until you see something that intrigues, or to spend time on fewer things. Each level is devoted to a theme, so you can take in one floor at a time, and move on when you’ve seen enough without feeling like you’ve given up. 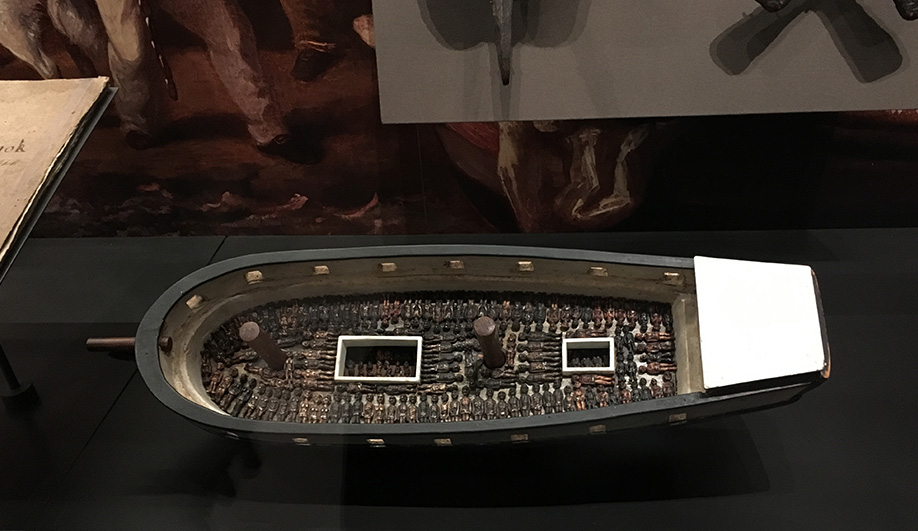 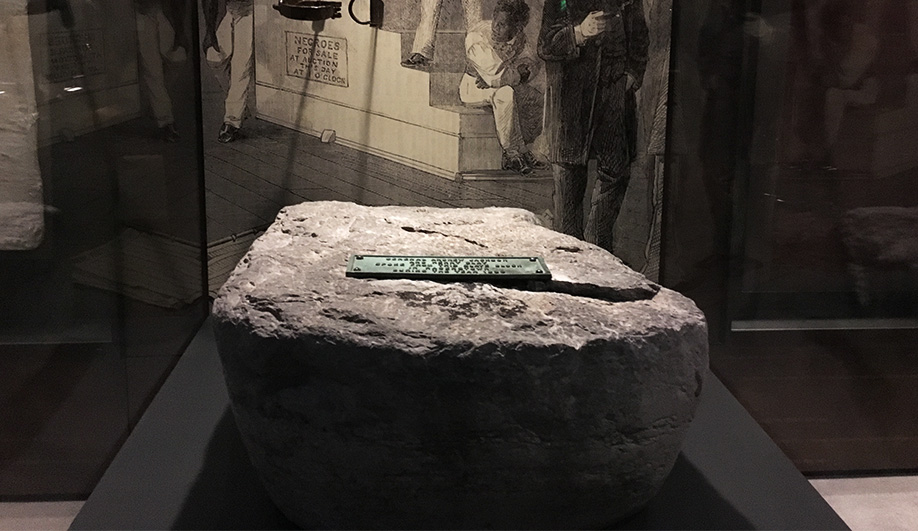 A typical 19th-century auction block that was found in town squares.

The circulation is bottom-to-top via a long ramp that zigzags back and forth. The lower level outlines the history of slavery, and it is a dark exhibition, both figuratively and literally. The exhibition rooms are narrow and with low ceilings; the walls, floors and showcases are painted black. Wayfinding is achieved mainly through spotlights directed at wall-mounted quotations. The darkness makes it hard to get a good image on your phone, which means most visitors turn their full attention to what’s on display. Glass vitrines hold such items as the remains of slave ships, a rock that was used as a podium for slaves to stand on during auctions, and Nat Turner’s tiny, shredded Bible. 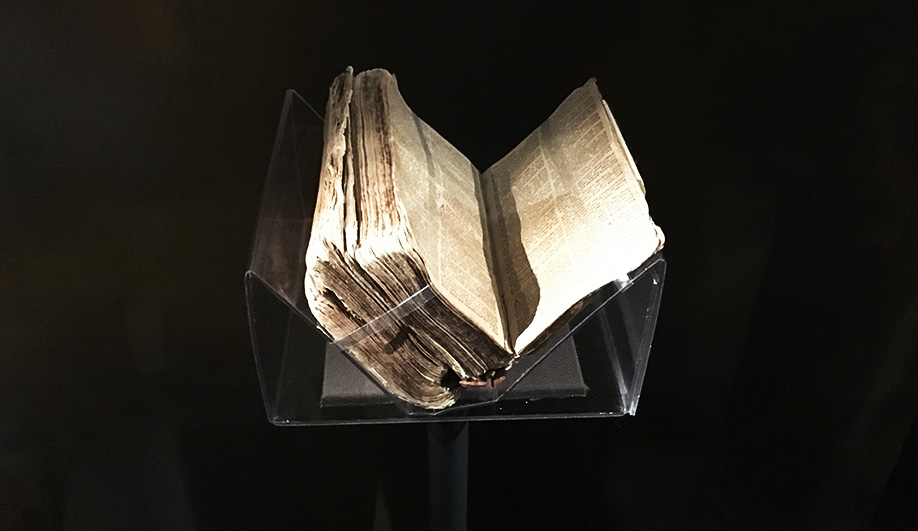 The chronology advances toward the present day with each level, and artifacts are grouped by themes that showcase every aspect of African-American culture and history, from athletes and military heroes to activists and scholars. The top level is devoted to musicians and performers, where showcases are filled with costumes worn by the Jackson 5 and Whitney Houston, Chuck Berry’s red Cadillac and George Clinton’s Mothership, among other memorabilia. 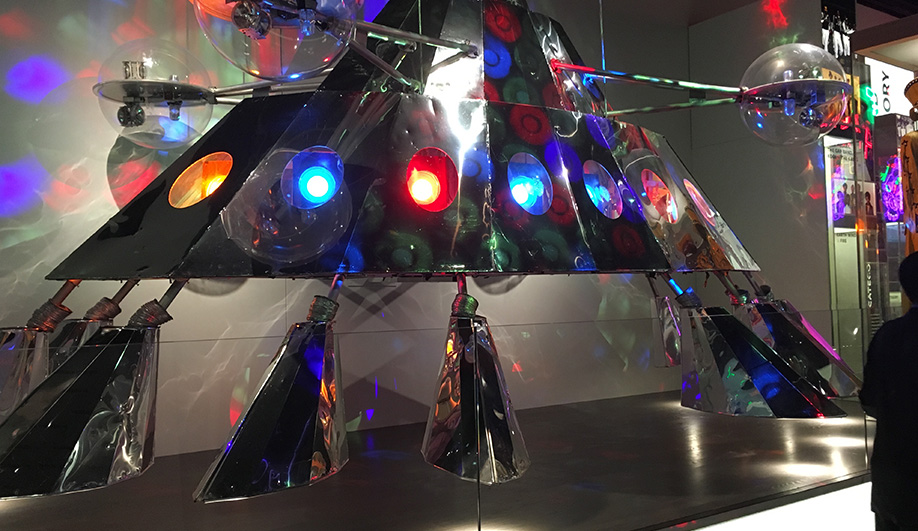 Even though the upper floors are shrouded in the same dark tones as the lower levels, the mood is theatrical and upbeat. It’s an ideal way to end the tour, as visitors walk away with sense of optimism and of memories to seeing a glove or the dance shoes of their favourite performers. The ramps, too, leave a lasting impression of a purposeful and extended ascent to the top. Adjaye has created a building that is as grand outside as it is inside, with no heavy-handedness or intrusions that don’t seem to fit. The NMAAHC is a gem. 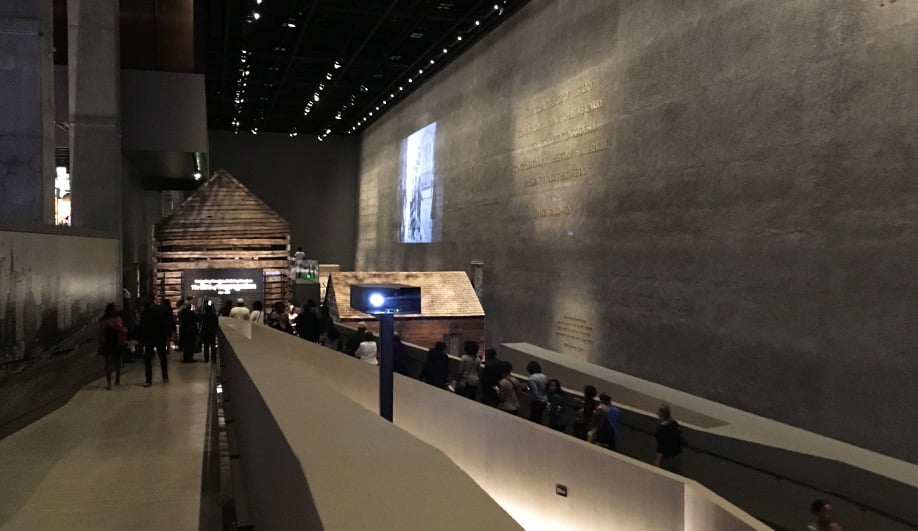