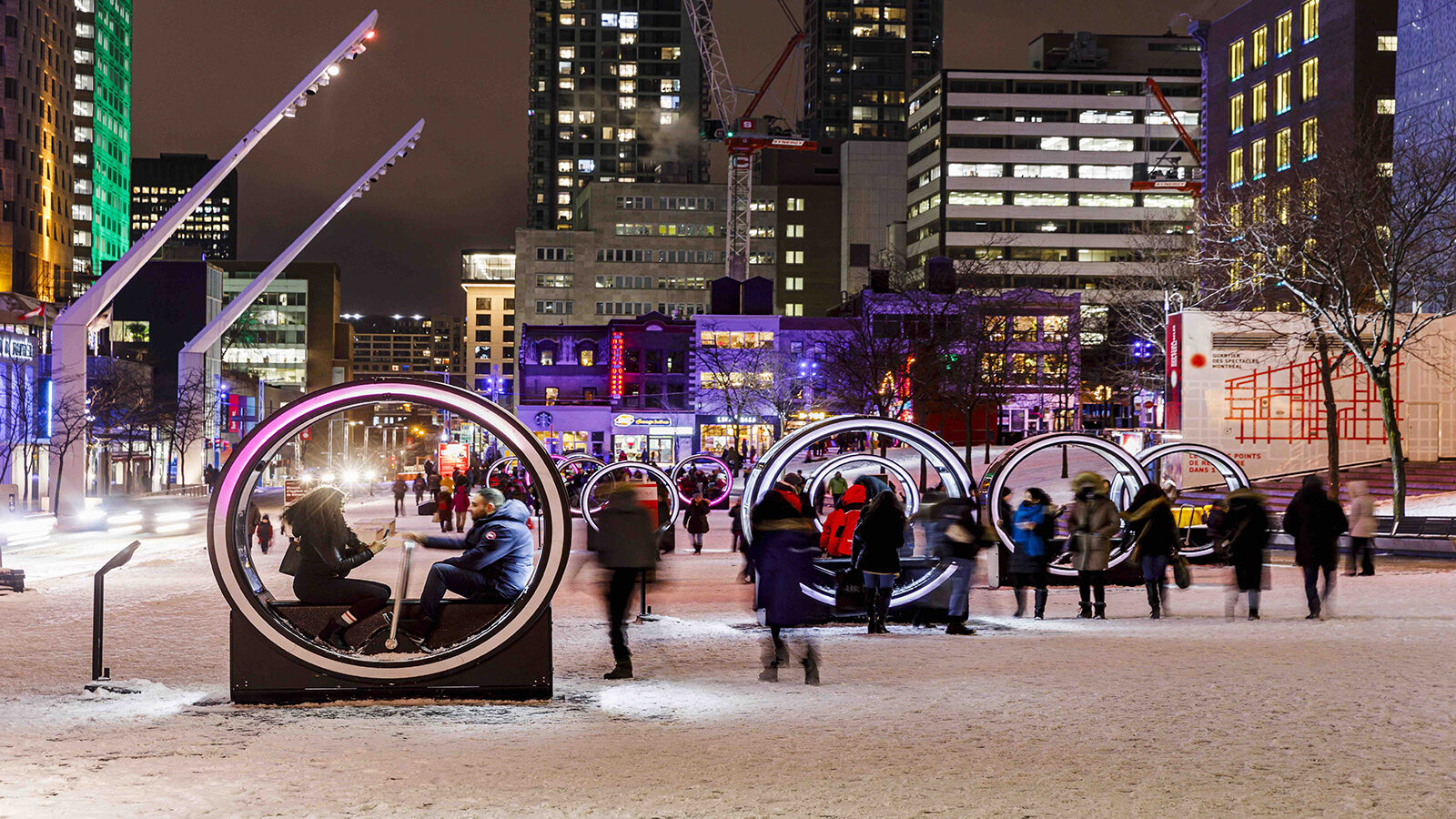 In the wake of the pandemic, an assemblage of interactive sound and light installations reanimate the city’s dormant arts and culture district.

At the beginning of the COVID-19 pandemic, Montreal’s vibrant and world-renowned arts programming, including festivals like Just for Laughs, Osheaga and Franco-Folies, was put on hold. Months later, with most of the city working from home and a new curfew instated on January 9th, the city was far from its usual, lively self. “We had a choice to make,” says Monique Simard, Chair of the Quartiers des Spectacles Partnership: “we could either stand by and watch the decline of our downtown core, or we could roll up our sleeves and get to work.” To this end, the annual Luminothérapie initiative, which has celebrated winter life on a smaller scale in the past, was expanded in scope this year to feature an innovative circuit of five interactive art installations.

At a time when spending time outside the home has proven challenging, Montreal’s Quartier des Spectacles Partnership aimed to provide city dwellers with an impetus to interact (safely) with their urban environment. A cohort of local creatives was tasked with creating outdoor public art interventions that would survive Montreal’s inclement weather while inviting passersby to spend more time outside. The result is an ingenious, refreshing cultural offering which expands within a territory of approximately nine square kilometres in the city’s downtown core.

The initiative’s moniker, Luminothérapie (French for light therapy) is inspired by the idea that winter blues can be alleviated through the use of bright lights that mimic natural light. Conceptualized as a participatory experience, where visitors are an active component of the design, each of the five installations plays with light in the middle of a dark winter, responding and dialoging with its guests. In addition, each night, the Coeur Battant (Beating Heart) sound and light show illuminates building facades with a mix of festive projections and original music. While a more rehearsed version of banging pots and pans, it is also a celebration of the city’s cultural heritage, and the “beating heart” of Montreal’s artistic community.

For Ekumen’s Loop installation to function, it must be activated by a mechanism which accelerates with each lever pull. Presenting adapted fairy tales in the style of a zoetrope animation with a music box soundtrack to match, the vigorous movement required to animate the zoetrope might help visitors keep warm in frigid temperatures.

Kanva Architecture’s Entre Les Rangs (Between the Ranks) puts Québec’s agricultural history in conversation with the urban environment surrounding it. The flexible stalks, topped with white reflectors referencing wheat fields that undulate in the wind, are clustered to create pathways that visitors can walk through while admiring the scintillating ensemble of stems.

Hub Studio’s Spectrum transforms sound into light: the user’s voice activates a series of ring lights to visually illustrate the movement of sound through space. Similarly, Iceberg by Atomic3 and Appareil Architecture takes the form of an immersive, human-scale structure that reacts to sound waves emitted by the participants who walk through it.

The Luminothérapie/Coeurs Battants initiative will play on until the 28th of March 2021, just as longer, sunnier days begin to brighten the city’s grey horizons.

In the wake of the pandemic, an assemblage of interactive sound and light installations reanimate the city’s dormant arts and culture district.