RUF and AZURE Team Up for Tubalicious at IDS Vancouver
For IDS Vancouver, Azure teamed up with local firm RUFproject on a site-specific installation that was equally simple and mysterious. 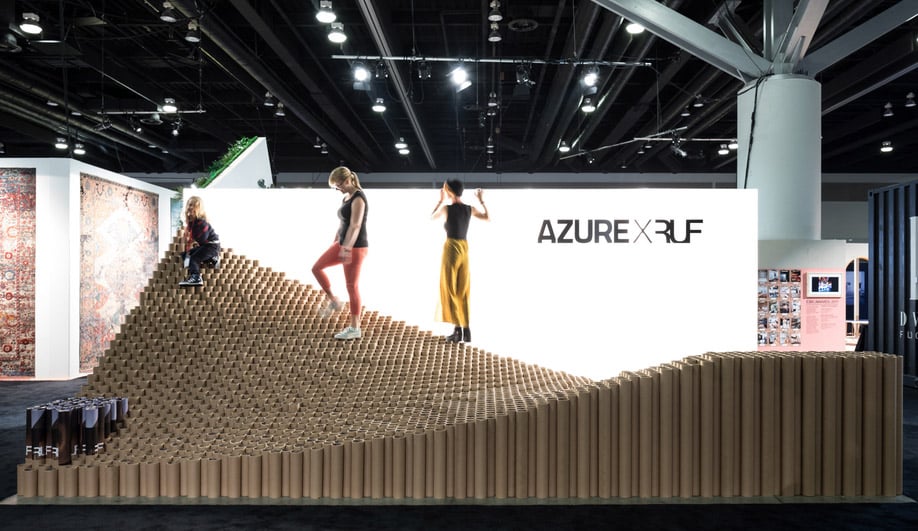 Last week at IDS Vancouver, Azure launched a new creative initiative that we hope will continue long into the future. AZURExRUF is the first in a series of collaborations with some of our favourite design talents and saw Vancouver architects RUFproject create a site-specific installation that served as both Azure’s booth and as a showcase for one of the city’s top studios.

RUFproject is known across Canada for its thoughtfully detailed residential projects on the west coast and around the world for a slew of international projects that include retail stores, event spaces and the AZ Award-winning Nike Football Training Centre, in Soweto, South Africa. 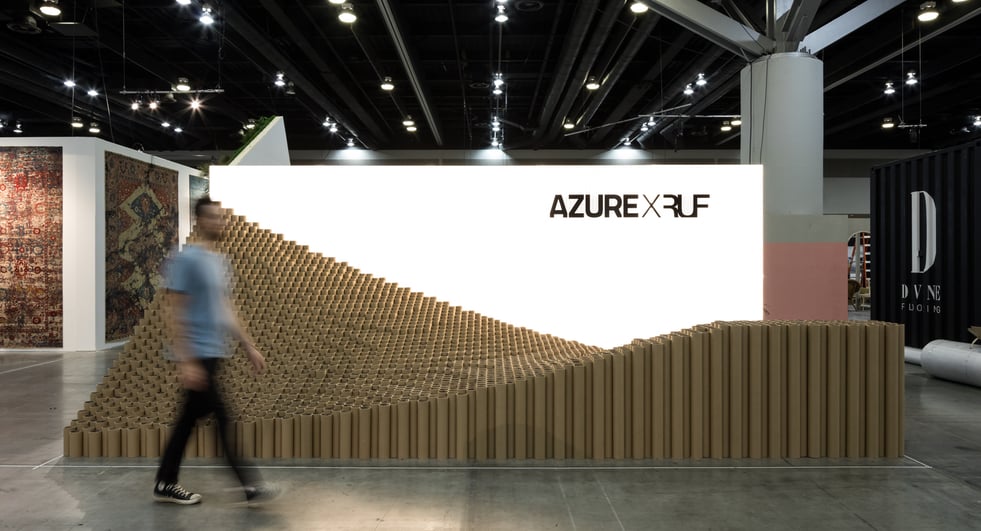 Led by founder Sean Pearson, the six-person RUF team worked with another local firm, Intempo Interiors, to construct an undulating, climbable landscape, built from 2,740 cardboard tubes, for Azure’s IDS Vancouver space. Incredibly simple yet a little bit mystifying, show goers couldn’t seem to pass by our “Tubalicious” space without stopping to slip off their shoes, step up onto the tubes, and wonder just how it worked. But, as Pearson will tell you, it actually wasn’t complex.

“We wanted to do something that would be recyclable, because there’s a tremendous amount of waste involved with events. The amount of stuff that goes into the garbage is ridiculous. So we came up with paper pretty quickly,” Pearson says. “We did some studies of different forms, but the cardboard tubes came pretty quick. RUF does a lot of event stuff in the U.S. and internationally, and using something that’s ready-made is always a great way to start, because we usually don’t have a lot of time.” 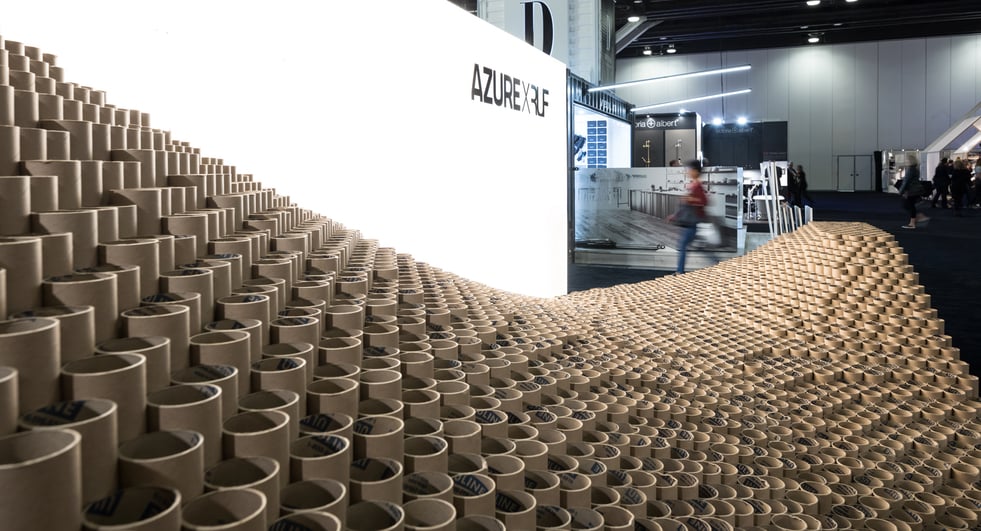 Pearson also liked the idea of the tubes because of their relationship to architecture, as they have traditionally been used to mail architectural drawings. RUF, like most firms, are working more and more with 3D drawings than ones that could be rolled up and stuffed into a tube, so in this way, the booth gives a nod to what is becoming a dying art. “It’s kind of nice, because while this landscape has a very digital aesthetic, it was actually all done by hand.” 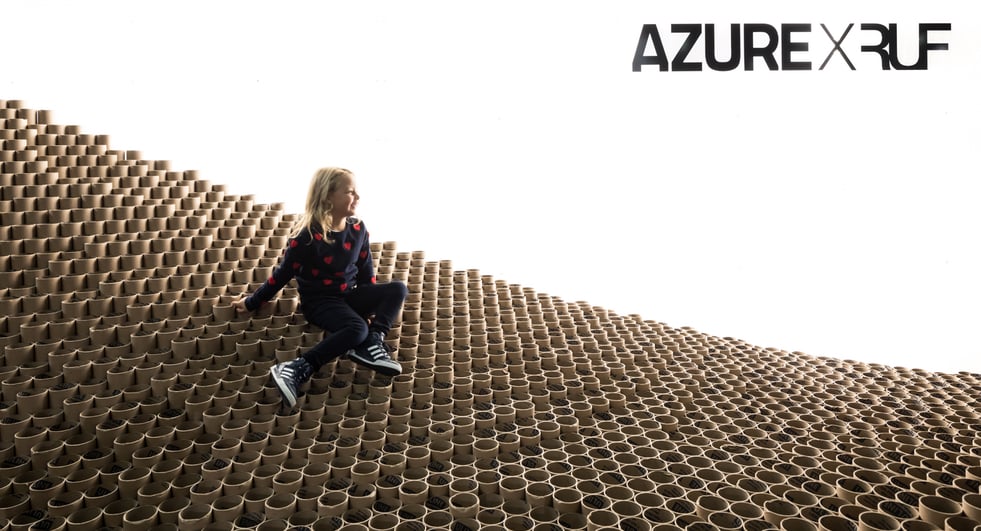 Once the firm had the basic concept in place, they tossed around a lot of ideas about how to assemble this walkable surface. The team first considered cutting all the tubes to different lengths, but worried about the logistics. The next thought was to create a CNC base, perforated with holes of varying depths, which the 36-inch tubes could be dropped into. But the computer hours and cutting time that approach would demand was overwhelming. After realizing that cutting the tubes down to size was a fairly quick procedure, they stocked up on cheap blades and got to work. 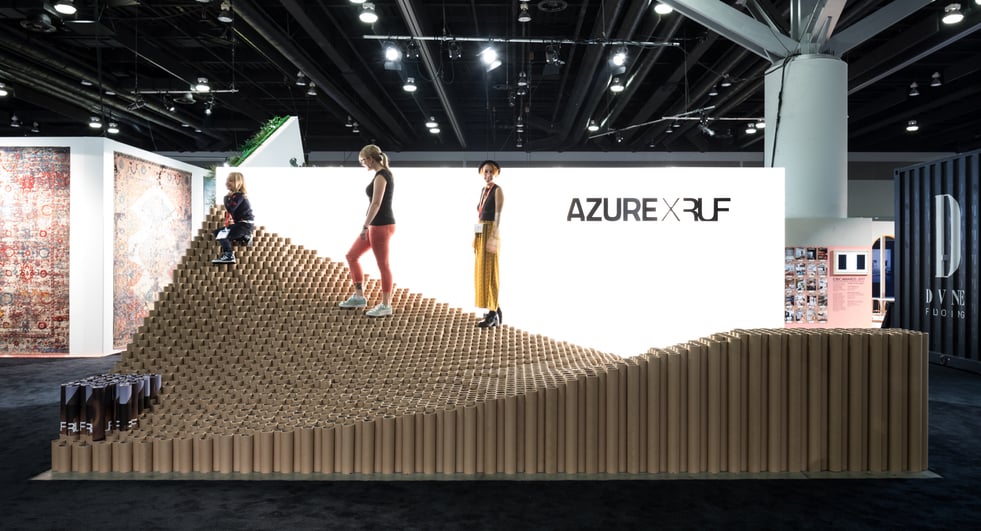 “You start off complex and then you work and work and work it until you get really simple,” Pearson says. “We did a couple of tests, and it was like, all right, we don’t need to have forms, we’ve got cardboard, and white glue… and we literally just glued them together.”

Over the span of a weekend the tubes were glued into 3- by-3- by-3 foot segments that could be easily carried and moved through a doorway. Once on site, these segments were assembled to form the finished installation in less than an hour. “It’s like a jigsaw puzzle and you just put them all together,” says Pearson. 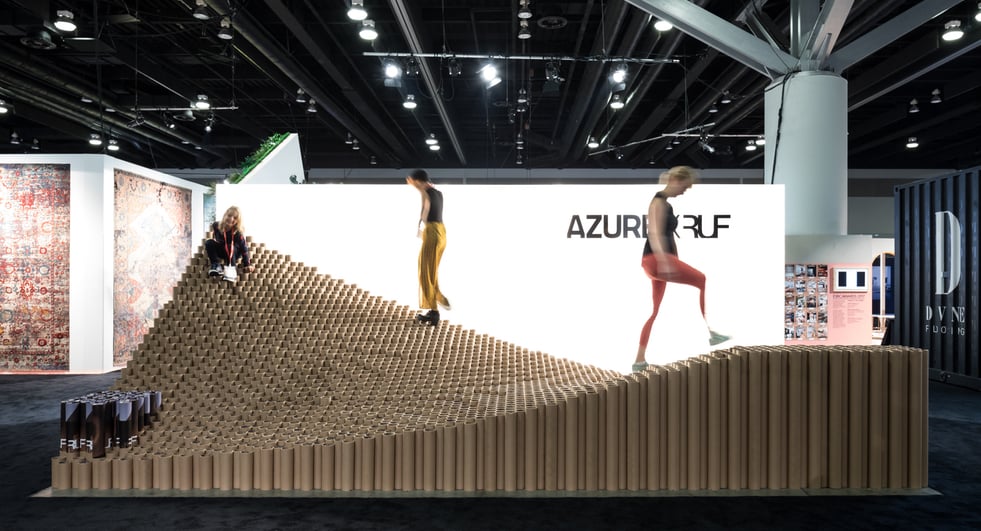 The standard sized tubes were cut to minimize both the order and waste, and the offcuts that did result have been donated to art programs at two local high schools. When the booth was taken down after the show, every component was either recycled or repurposed. The inexpensive light panels that formed the back wall were something that the firm had on hand, having used them in a previous project, and they’ll be put into storage and use again, Pearson says.

“There’s nothing about the booth that’s excessive. And that’s kind of our thing,” says Pearson. “We try to communicate a story as clearly and succinctly and powerfully with the least amount possible. 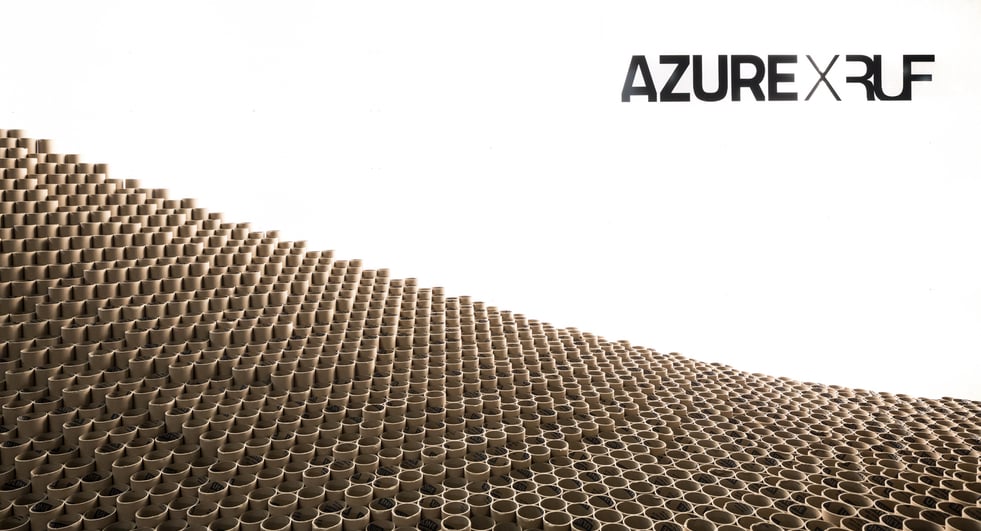 “The mandate we got from Azure was really flexible, but we all agreed that it needed to be something fun and inspirational and something that would get people’s attention. I didn’t want to put on an exhibition about ourselves, so I thought we’d do something that would kind of capture who we are, but in a really abstract and basic way. The whole thing is really about that moment of stepping on those tubes, the smile that people have on their faces – pushing them into a different place and enjoying that kind of experience shift. That’s what we’re about.”