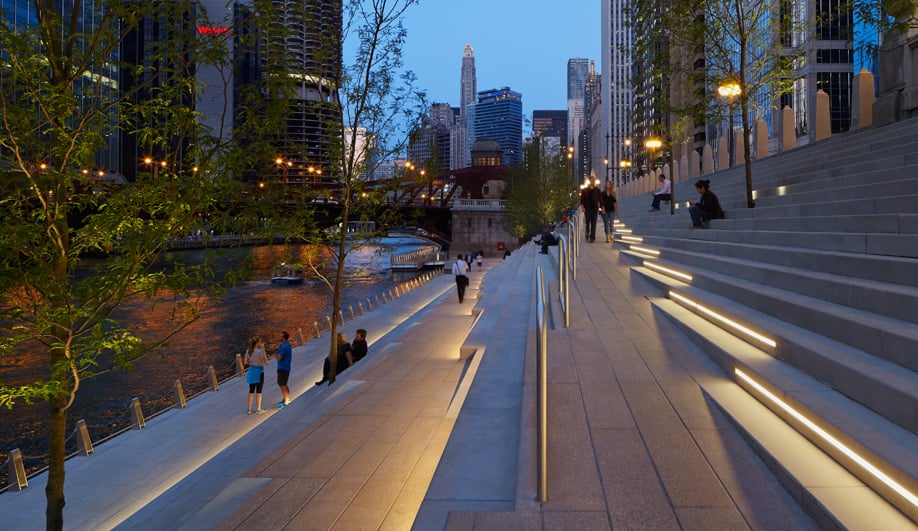 Schuler Shook turns Chicago’s Riverwalk into a 24/7 destination thanks to its theatrical illumination.

When the final phases of the Chicago Riverwalk opened in May, tying together six blocks of attractions along the south shoreline, it was a triumph for the city’s ecology, outdoor recreational life, and economy.

The linear, seven-and-a-half-metre-wide Riverwalk – sandwiched between an active shipping waterway and a thoroughfare, and sliced into sections by multiple bridges that carry traffic over the river – is not your typical urban park. Earlyon the design team, led by Chicago’s Ross Barney Architects and Boston’s Sasaki, decided to approach each block as a distinct “room”; today visitors can run through the multi-hued fountains of the Water Plaza or watch the Jetty’s ever-changing coloured lights sparkle on the waves.

Much of the responsibility for uniting the discontinuous site fell to the lighting designers, local theatre and lighting experts Schuler Shook, who also lit key features of the city’s Millennium Park. “To tie all the rooms in the Riverwalk together, from a visual standpoint, we introduced layers of lighting that stay consistent throughout the rooms,” explains lead designer Giulio Pedota. “The most prominent is the one associated with the celebration of the historic arcade.” Here, Schuler Shook embedded bright spotlights in the deck to light the arcade’s heavy columns from below. Recessed linear LED fixtures, softened with opal-white lenses, are another element common to several rooms, splashing glowing graphic lines along benches, planter walls and ramps, and up the posts of the under-bridge handrails. 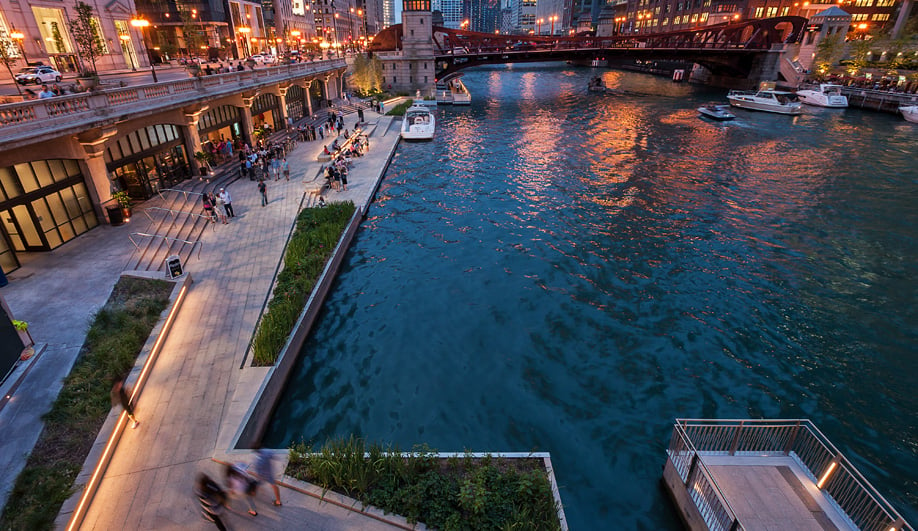 Within this unified whole, each room has its own distinctive flavour. “We wanted to pique interest in walking farther along to see what’s around the next corner,” Pedota says. “In the Cove, for example, we created an effect of moonlight through the trees, very much like we do with theatrical lighting. In the middle of downtown Chicago, the effect of moonlight through trees is totally unexpected.” In the River Theater, meanwhile, linear LED fixtures recessed into the stair risers emphasize the structure of the very wide stairs, while also contributing to better safety.

The project was not without its technical challenges, as the river’s water level can fluctuate by over two metres annually. Not only did the site and all its lighting fixtures need to be flood-proof, but, as Pedota explains, “the city wanted to minimize the number of fixture types and reduce energy consumption.” As a result, all the lighting elements in the Chicago Riverwalk are robust and submersible, low glare, and both fully integrated into the architecture and easily accessible for maintenance. “In one instance, we had to create a custom handrail to meet our specifications, because there were no submersible-rated handrails in our industry,” Pedota notes. “But now, Chicago has them!”