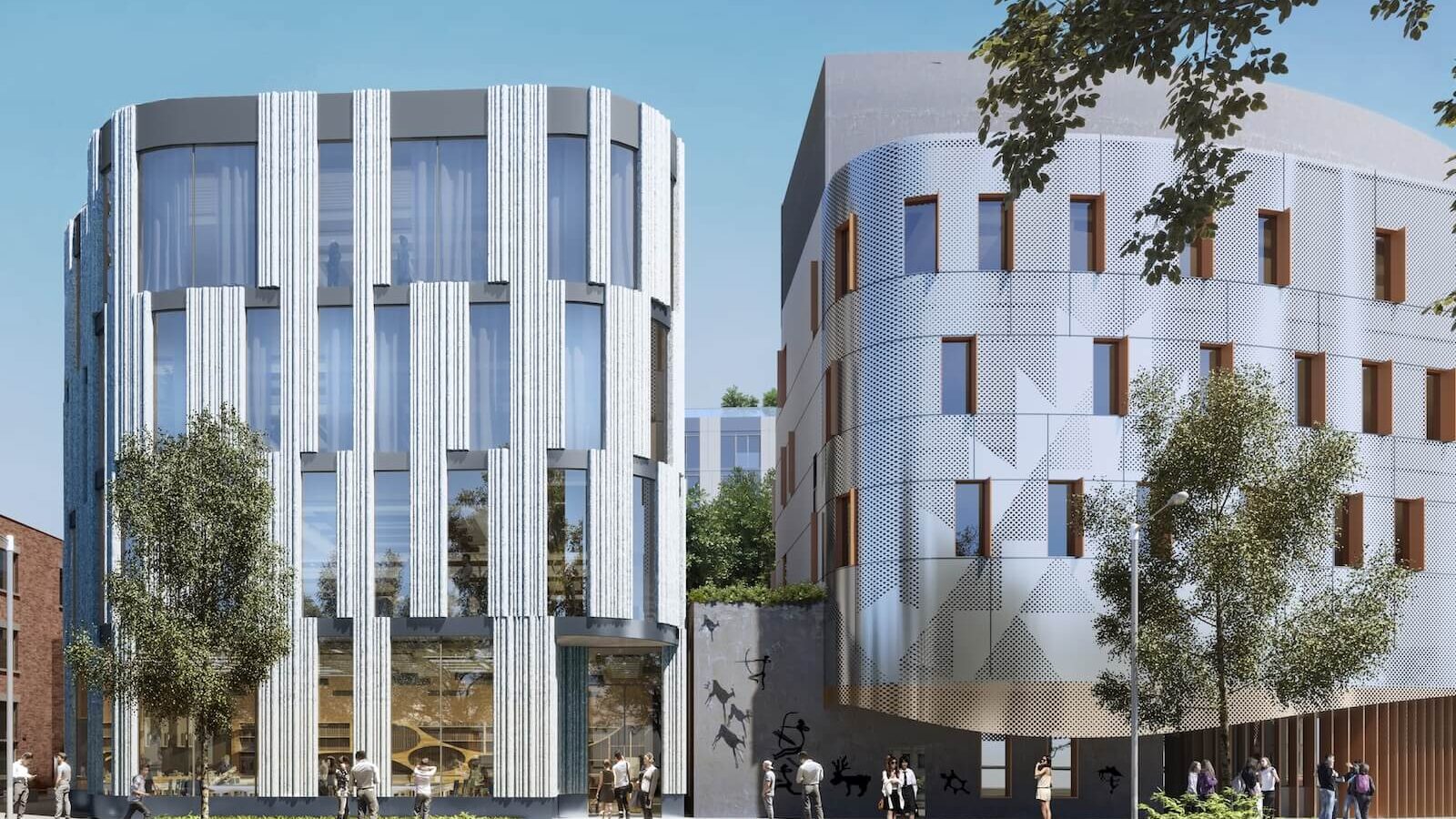 The Indigenous Hub in Toronto Promises a Brighter Future

Two sinuous buildings hug a lush, raised landscape in the newly revitalized east-downtown Toronto neighbourhood known as the Canary District. ­One is wrapped in a façade of concrete “birch trees,” the other is ensconced in a metal shawl with a swaying fringe. Beyond an edge wall depicting wildlife imagery found on ancient Peterborough petroglyphs, a raised landscape planted with native species intertwines a rainwater-channeling bioswale with a winding foot path. Inside the buildings, health and wellness services that combine Indigenous and Western approaches are complemented by social and cultural programs. These two unique buildings are central to a master-planned community, also including retail and residential, called the Indigenous Hub.

The project hasn’t broken ground – its completion is slated for 2023 – and yet for the people who have been driving this unprecedented development it must feel more tangible than ever. Its possibilities, even as a setting unrealized as of yet, are nothing short of inspiring. “I don’t know of any other place with a full city block that’s Indigenous,” says Joe Hester, the Chief Director of Anishnawbe Health Toronto.

Hester has been working to create an Indigenous health centre for 20 years. During this time, AHT’s services have been offered in three locations, ever since the opening of its first-ever facility in a former bank building at Queen and Sherbourne. 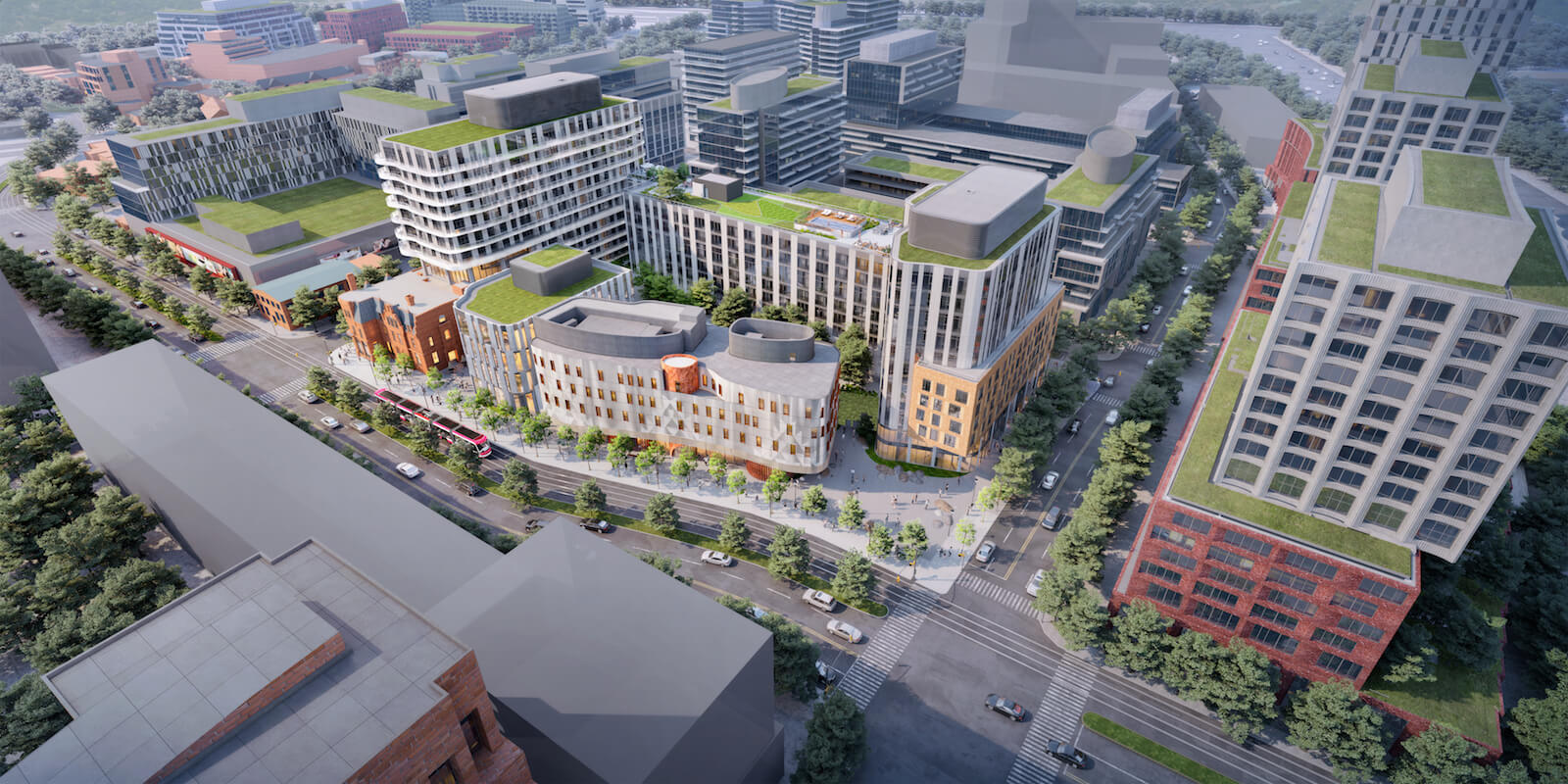 The Indigenous Hub is situated along Cherry Street between Front and Mill Streets. It comprises two Indigenous centres and two residential buildings, as well as the refurbishment of the old Canary Restaurant on the northern edge of the site. Rendering by Quadrangle

Then, in 2014, the provincial government returned a 2.4-acre parcel of land (at the southeast corner of Cherry Street, between Front and Mill Streets, and adjacent to the former Canary Restaurant) in the West Don Lands to Anishnawbe Health Toronto. There was no operational funding provided; a few years later, therefore, in order to finance the creation of a dedicated place for Indigenous wellness, AHT entered into a partnership with the developers Dream Unlimited and Kilmer Group to complete the Indigenous Hub with retail and residential (which includes a condo building developed by Dream and Kilmer Group as well as a rental building by Dream, Kilmer Group and Tricon Residential). The developers had long been involved in the reinvention of the growing east-end neighbourhood, which saw the Pan Am Athlete’s Village transformed into the Canary District as part of Waterfront Toronto’s lakeshore revitalization program.

Beyond AHT and its co-developers, the creation of the Indigenous Hub involved a trio of prominent architecture firms. Quadrangle, in consultation with Stantec and Two Row Architect, designed the masterplan for the entire site, and each firm had a special role to play in the architectural visions for the individual buildings. In terms of the Indigenous-focused structures, Quadrangle (with Two Row) designed the concrete-clad Training, Education and Employment Centre, to be operated by the Miziwe Biik Training Foundation, that sits on the northern edge of the site, adjacent to the former Canary Restaurant (under restoration by ERA Architects). It offers Indigenous skills training, education and employment programs and, working with the City of Toronto, houses Indigenous-focused childcare and family centres. And, next door, Stantec (with Two Row) designed the metal-wrapped Indigenous Community Health Centre, which is owned and operated by AHT, and the landscaped courtyard on the other side of the low-slung horizontal building.

Two Row, an Indigenous-owned firm, provided consulting for the entire block, its buildings and landscaping by developing guidelines based on Indigenous principles. “Our role was to guide the translation between Indigenous knowledge and architectural form,” explains Two Row partner Matthew Hickey, a Mohawk architect from the Six Nations of the Grand River First Nation.

Joe Hester also speaks of the kind of buildings he hoped to see, architecture that spoke more to the “circular” (rather than linear) aesthetic that expresses Indigeneity. “We wanted to bring an architecture to the Toronto landscape that represents us culturally,” he says. “Then of course, our community would see something they could be proud of. The interior spaces had to be able to facilitate our cultural approaches to health and healing – our ceremonies are very important to the healing process.”

Two Row’s design principles encompassed everything from honouring the passage of time – the movement of natural light, of day to night and the sun’s arc from east to west – to making a strong connection to the site. Indigenous knowledge about this particular place near the mouth of the Don River is vast and intricate. Deer and beaver used to coexist on this land, and birch trees, used in canoe making, are native to the area. The Don is part of a landscape that Indigenous Peoples have referred to as the Dish With One Spoon, for its ecological abundance and our collective responsibility to both be nurtured by it and to protect it. As Hester says, “Our view of land is a little bit different. In terms of orientation, directionality, how it’s utilized, the idea of the medicine garden. Land is a partner in the healing process.”

At the Indigenous Community Health Centre, where the metal Sobotec-panel facade is perforated in a pattern that references the shawls used in ceremonial dances, floor-to-soffit glazing allows transparency through to the central landscape. The ground level of the four-storey, 4,000-square-metre building is partially shaded by a series of wood slats that take their inspiration from Indigenous basket weaving. On the east side, adjacent to the raised landscape, the shawl opens to reveal a four-storey atrium that organizes the centre’s clinical programs and connects to the morning sun and central landscape.

These programs, contained in pebble-shaped spaces (“pebbles in the stream” was a guiding principle), include the ceremonial space – a ground-floor private space that is open to the sky and will also house a sweat lodge. One of the biggest challenges here came from Joe Hester: he asked that the buildings sit on the earth and that there be no parking level below the ceremonial space. The architecture firms made it happen, facilitating this relationship to Mother Earth. 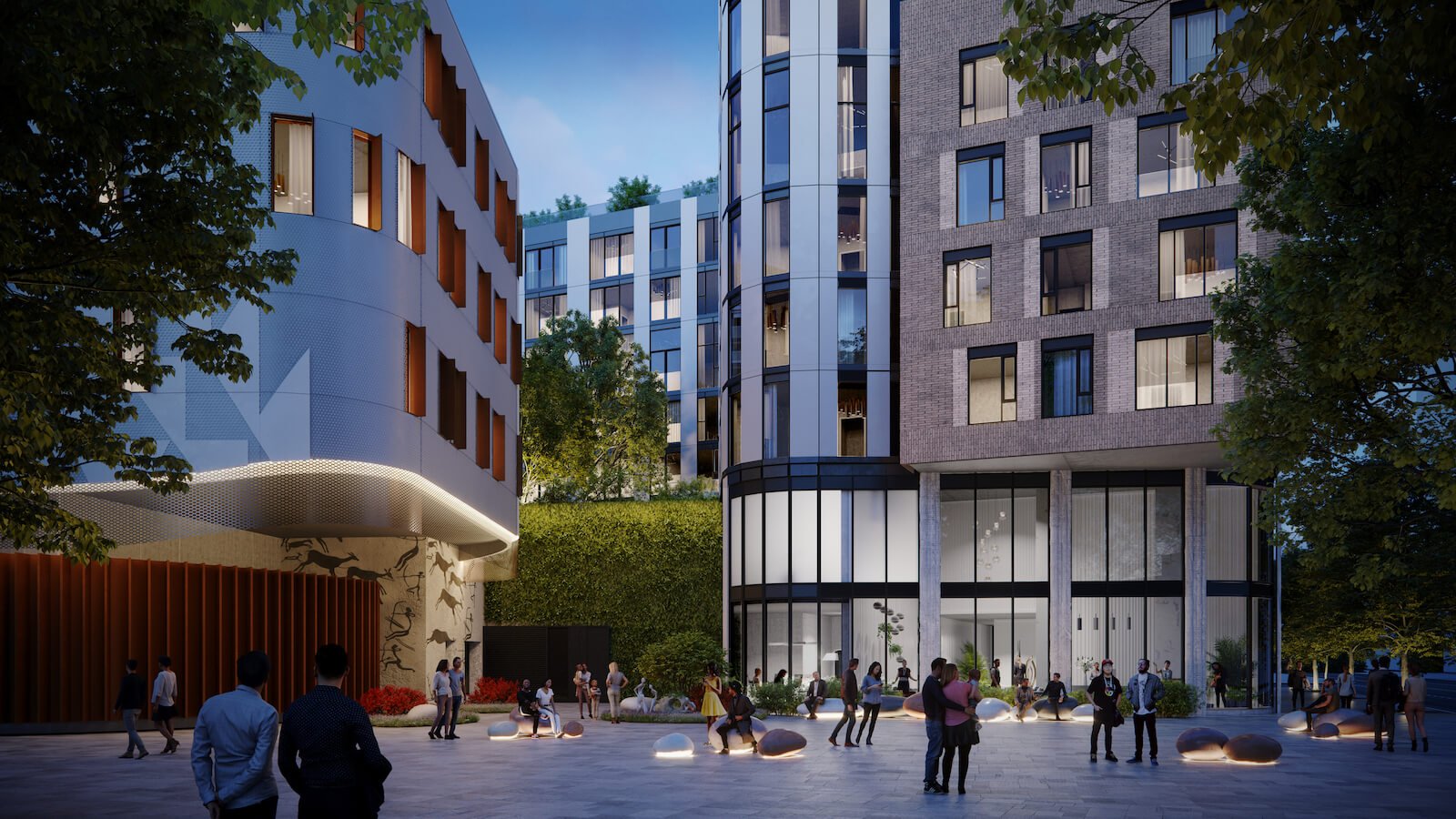 A view of the southwest edge of the site, with the Indigenous Community Health Centre on the left, the southwest plaza central, and the rental residential building on the right. Rendering by Quadrangle

The outdoor landscape designed by NAK Design Strategies and Stantec also encourages connection – between the place and the people who will move through it. “The site offers opportunities for the public to be engaged,” Stantec senior associate Suzanne Graham says. She speaks of the “eroded” corner of the southwest plaza. “Transforming this important corner into a publicly accessible landscape allows the Hub to be physically and visually permeable,” she says. “In a typical city block this corner would be fully built.”

Just beyond is the raised landscape, which sits 6.5 metres above ground (it is accessed via the buildings’ second floor). It features a walking path surrounded by native plants – tobacco, sage, cedar, sweetgrass – and seven benches that represent the seven grandfather teachings: wisdom, love, respect, bravery, honesty, humility and truth. Interwoven with the path, a meandering bioswale collects rainwater for irrigation.

For Quadrangle principal Les Klein, the entire project has been a continuous learning process. “It immediately was apparent that this place needs to be different and that it needed to speak a completely different language – one that I was not familiar with,” he says. “As I started to get into it more and more, what we had was more than a project – I would say it was a calling.” For the cladding of the Training, Education and Employment Centre, also four storeys high (with a mezzanine inserted into its very tall ground floor), Quadrangle and Two Row interpreted the birch groves native to the Don into pre-cast concrete slabs with a texture akin to the tree species. The panels are offset between floors, and broken up by vertical windows, their variety in width representing the different ages of birch trees. 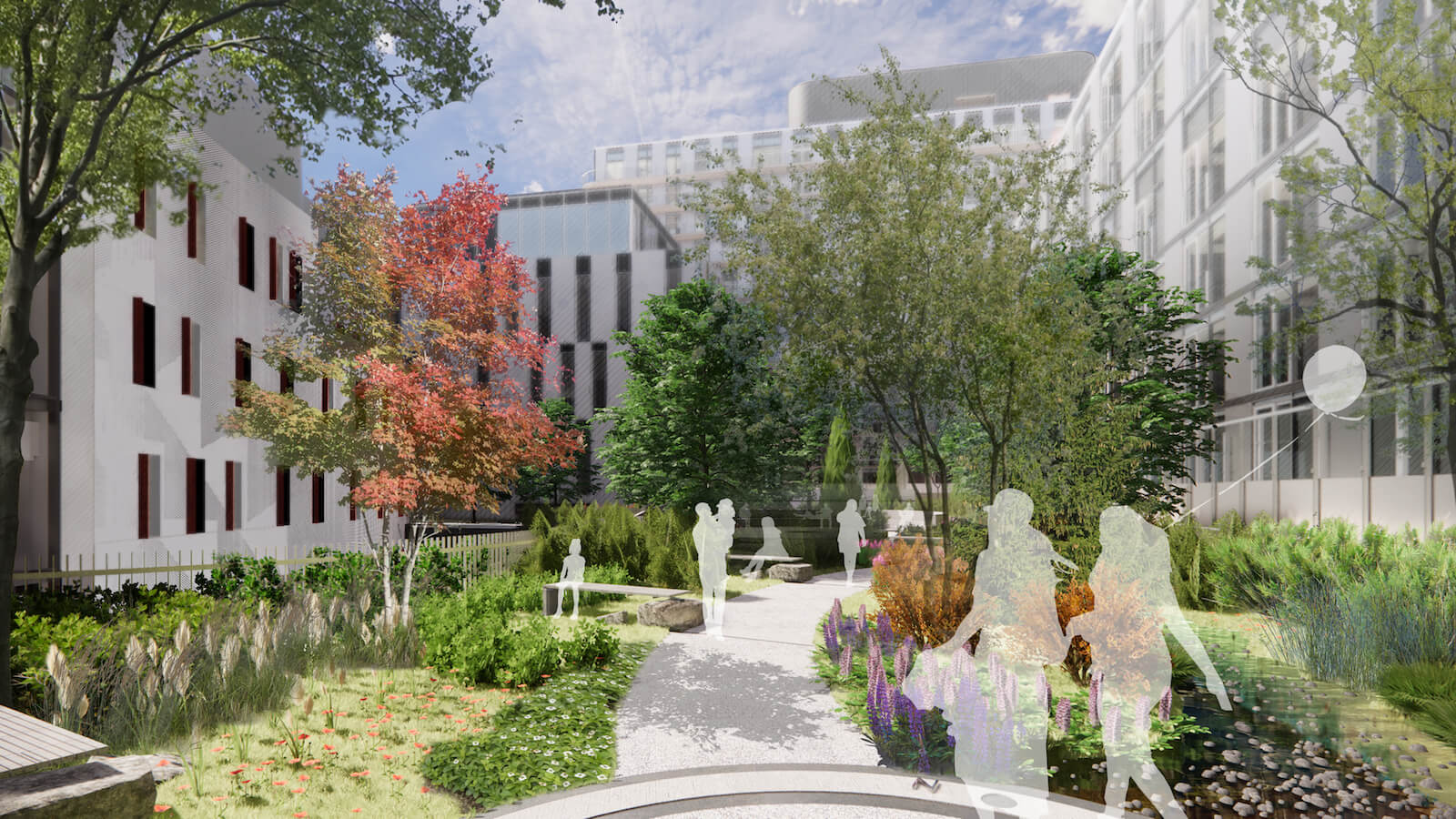 Designed by NAK Design Strategies and Stantec, the raised landscape between the buildings features a winding path commingled with a bioswale that collects rainwater for onsite irrigation. Rendering by Stantec

The material palette overall is informed by Indigenous consultation. Even the residential buildings, designed by Quadrangle, reimagine brick through this lens. The material has a negative association for many Indigenous Peoples: It recalls residential schools. This colonial connotation, therefore, was transformed with a pattern that resembles a traditional woven blanket.

The varied materials of the Indigenous Hub – and the images conjured by their unique application – comes together in a holistic way. “As you look at the building, you can see groves of birch trees anchored to the earth, a woven brick blanket offering warmth and comfort, and glass clouds and sky connecting to the seasons and the passage of time,” Klein says. 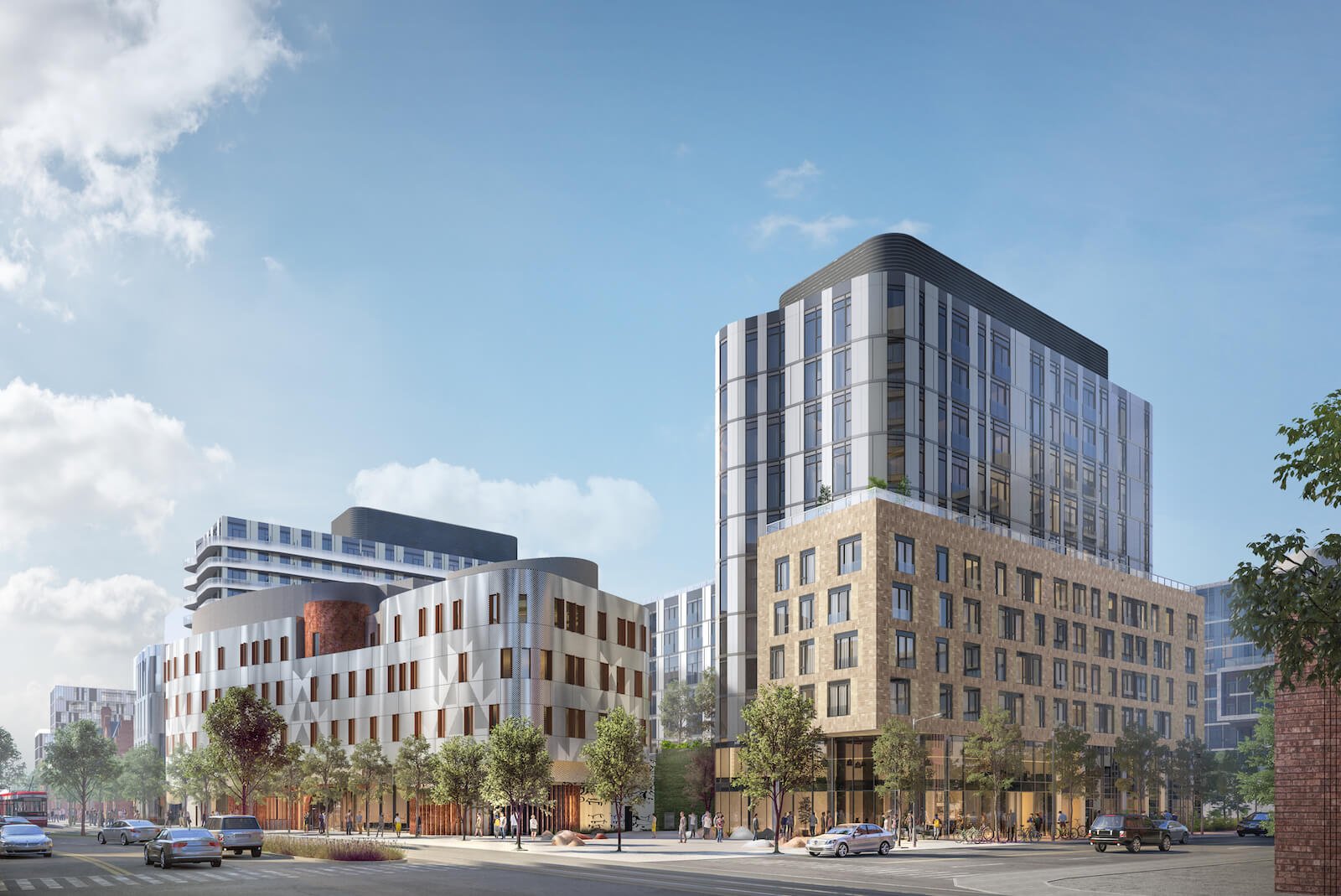 The third to sixth floors of the residential building on the southwestern edge of the site are clad in a brick pattern that recalls traditional blankets. Rendering by Quadrangle

It has been long understood that there is a profound need for a dedicated place for Indigenous health and wellness. While Western medicine is predominantly focused on the body, the Indigenous approach to healing also encompasses spirit, mind and emotion. But that’s not the only reason this project epitomizes hope. For generations, Indigenous Peoples have been experiencing racial discrimination in traditional healthcare settings.

An Ontario Human Rights Commission consultation conducted in 2015 found that Indigenous Peoples seeking health care “were perceived as a risk to others based on race and race-related grounds;” they were often not treated seriously by health professionals “because they are assumed to be drunk or high” and were often referred to as “narcotics seekers.” One midwife interviewed explained how the hospital where she works “routinely calls social workers or child welfare authorities” on young Indigenous women giving birth. 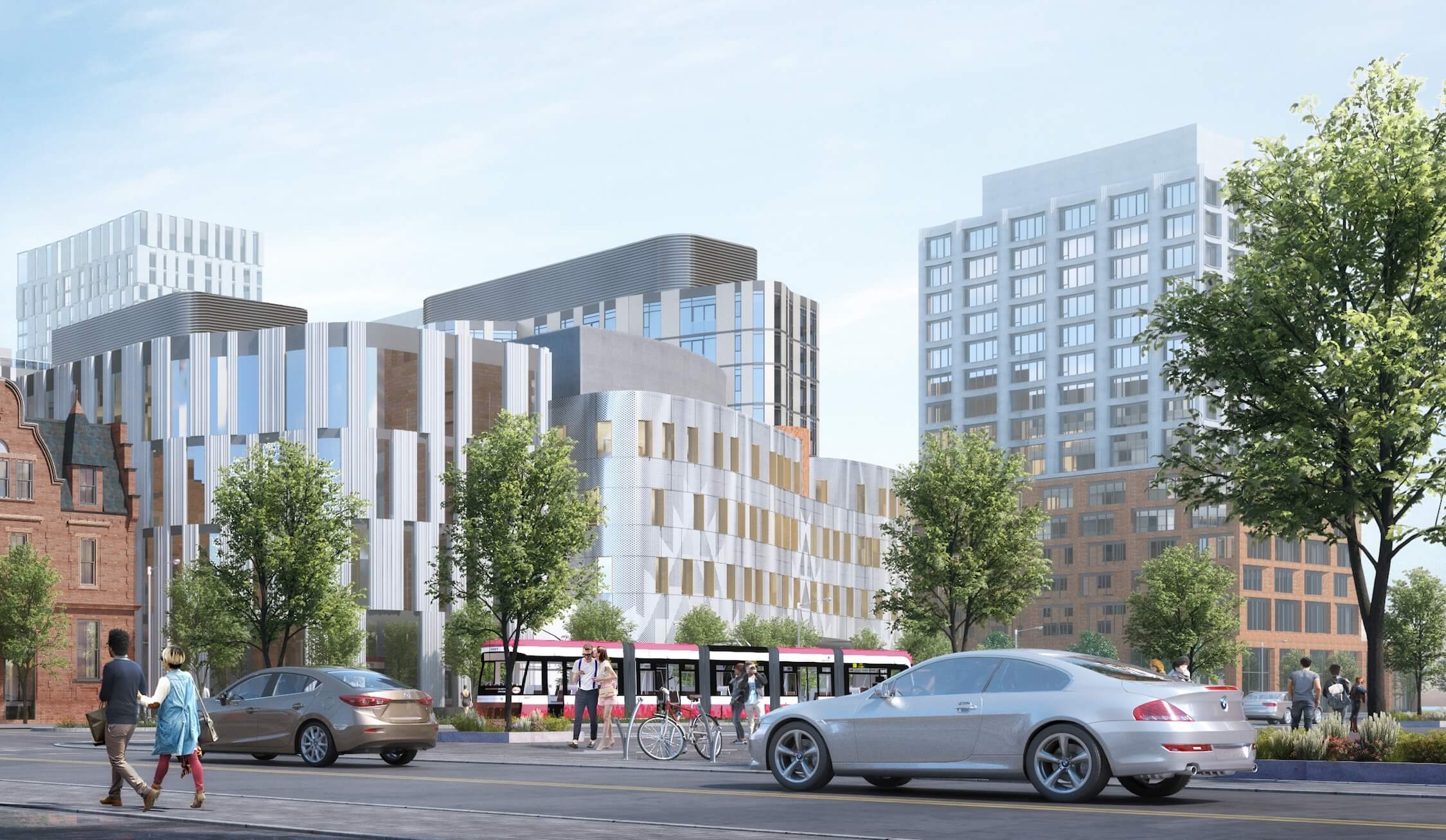 The Indigenous Hub is part of the 35-acre Canary District, spearheaded by Waterfront Toronto and developed by Dream and Kilmer Group. Rendering by Quadrangle

For Joe Hester, this project – perpetually on the horizon – has the chance to fulfil hopes beyond the services it offers. “In the early stages of the process, we had engagement from our community. And young people said that they see the hub as a place where Western and traditional can meet and learn from each other, and can contribute to reconciliation,” he explains.

“Even our architecture can positively contribute to Toronto. The important thing is the effort put forth by our people and our community – it gives hope and inspiration. It shows that good things are possible if we work together: That good things are within our grasp.”