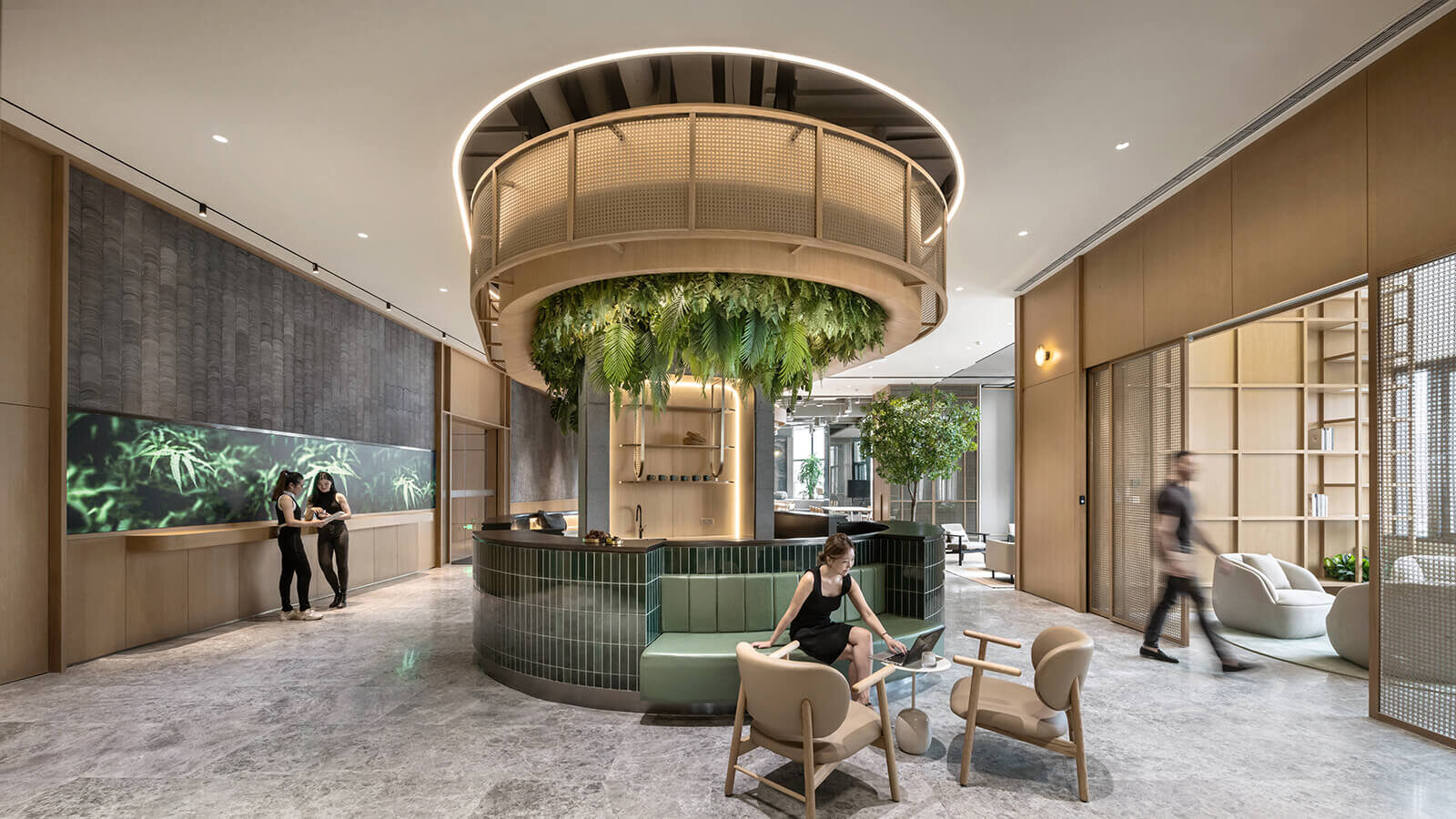 Even after more than two years, the threat of lockdowns and stay-at-home orders remains a constant around the globe, and many people continue to contemplate ever returning to physical office spaces. Since commercial building owners arguably have the most to lose from permanent work-from-home, landlords worldwide are brainstorming new services to dissuade tenants from shuffling off their leases. In downtown Shanghai, local real estate developer Shui On Land has devised one such solution, proposing a two-for-one offer — supporting business growth and encouraging strong social connections — that is available not only to office tenants of its recently completed Ruihong Tiandi development but also to area residents. 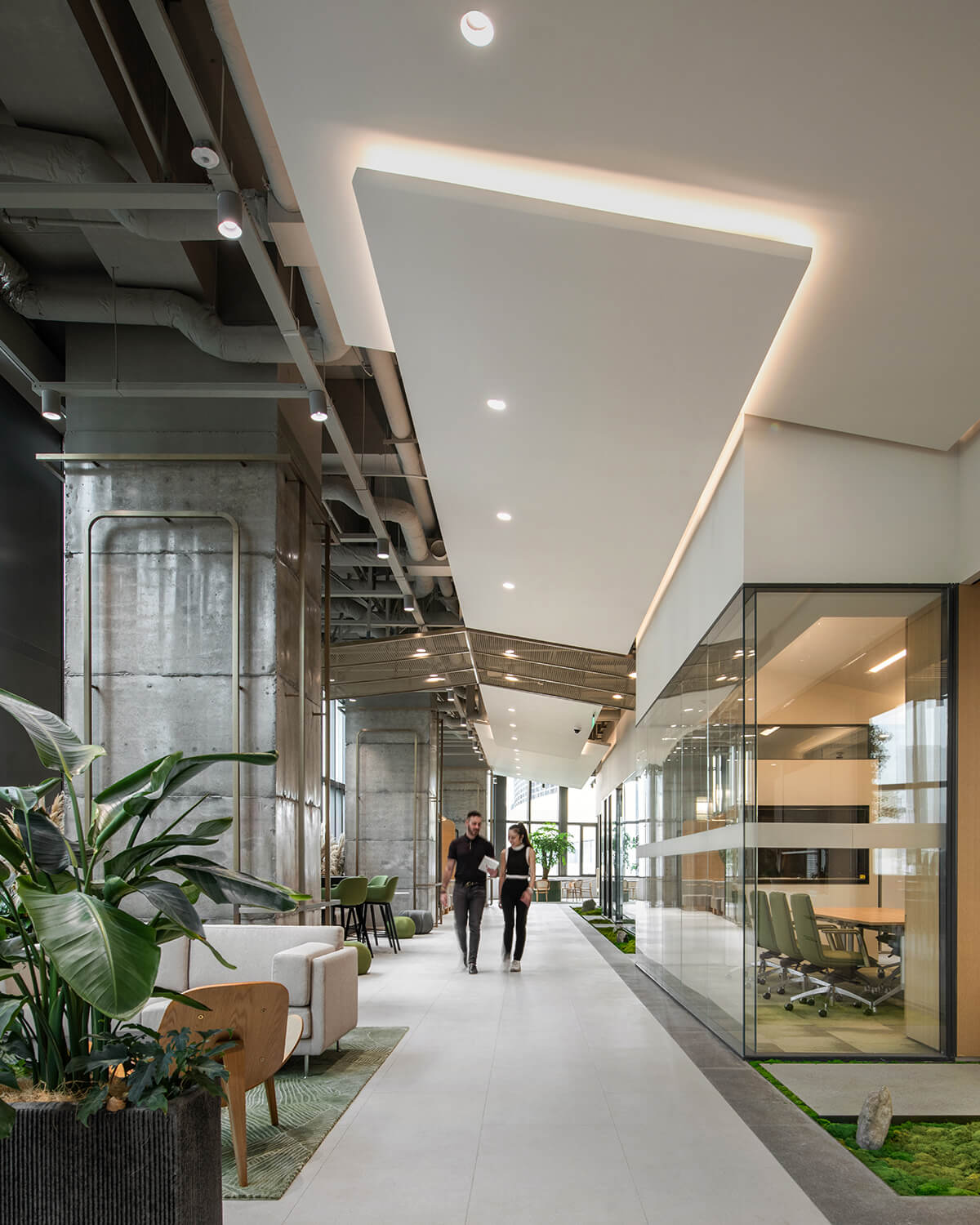 Called WorkX Social, it’s a capacious community hub where disparate businesses can meet clients and network with one another. Located inside the gargantuan complex’s Hall of the Sun podium building, the 1,500-square-metre space was brought to life by international design studio M Moser Associates, a firm well-versed in crafting “workspace environments that bring out the best in people.” Before beginning the design, M Moser strategists first questioned existing occupants about their day-to-day needs and wants. “One of our goals was to help these small companies,” says interior designer and associate of workplace design Jane Choi. What she and the team learned was that these businesses mostly desired a space for mingling. 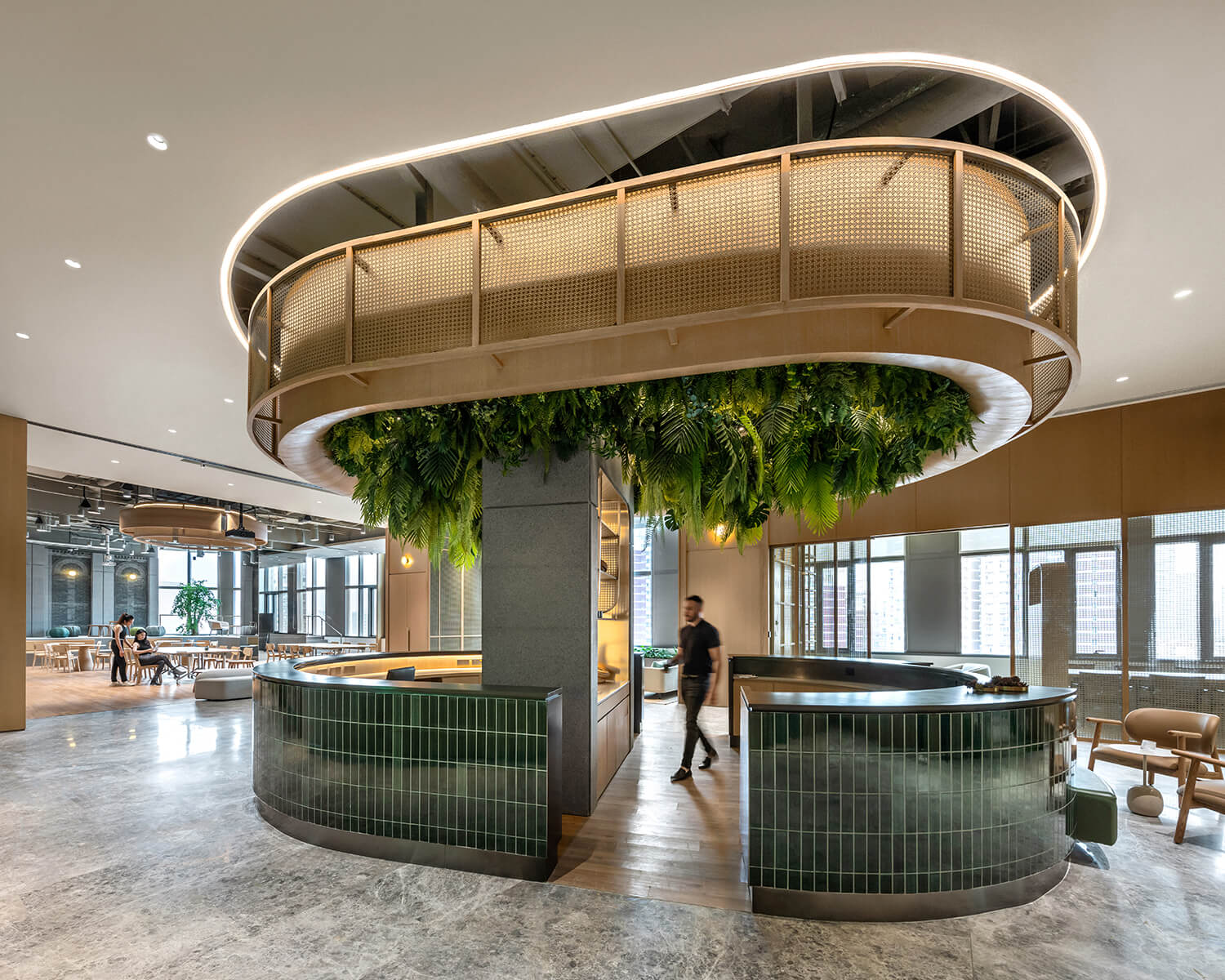 For WorkX Social, M Moser developed a series of different seating plans that support all manner of meeting and work styles. In the main lobby, a dark- green-clad open pantry hints at the well-designed spaces beyond.

A 120-person multi-functional venue within WorkX Social is located just beyond a cylindrical open pantry clad in dark-green tile; it immediately announces that the design team got it right. Collective zones further inside range from conference and game rooms to areas along the building perimeter filled with lounge chairs and banquettes. Library tables and pod seating are hidden furthest away to support focused work. To connect the modern amenity-filled space to both nature and the city’s cultural heritage, Choi et al strategically incorporated hits of biophilia, urban-influenced features and “soft digital” elements. 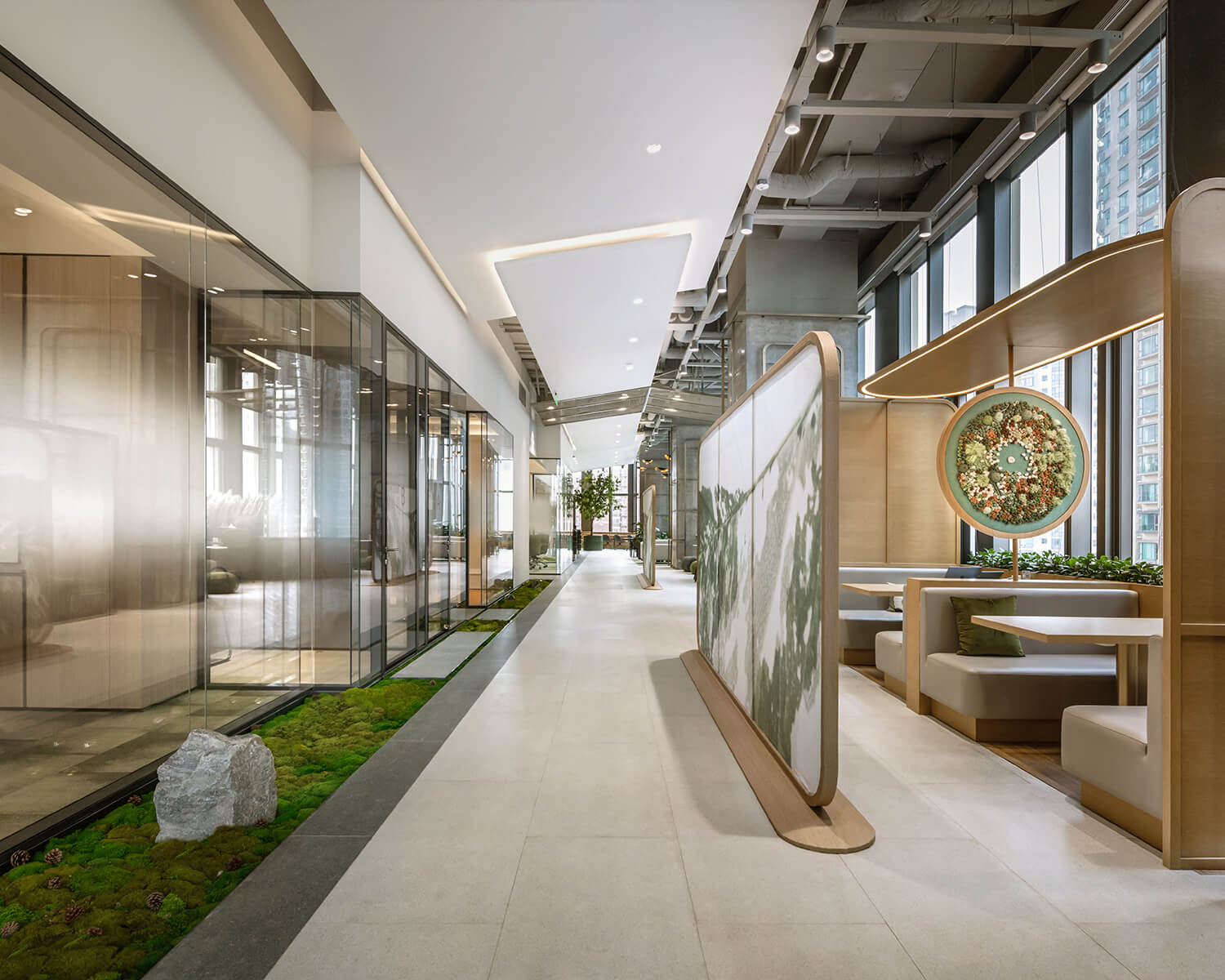 Vegetation is one analog arrow in M Moser’s biophilic quiver, which includes potted and architecturally integrated plants that signal different vignettes and circulation routes, respectively. A palette of wood, stone and sandy tones form the backdrop, while familiar visual references are woven throughout. “The gates and columns of local shikumen homes inform the design language,” says Choi. The fenestration of Shanghai’s pre-Communist Old Millfun slaughterhouse, another recognizable icon, found its way into mesh screens, as well as the destination’s logo wall. 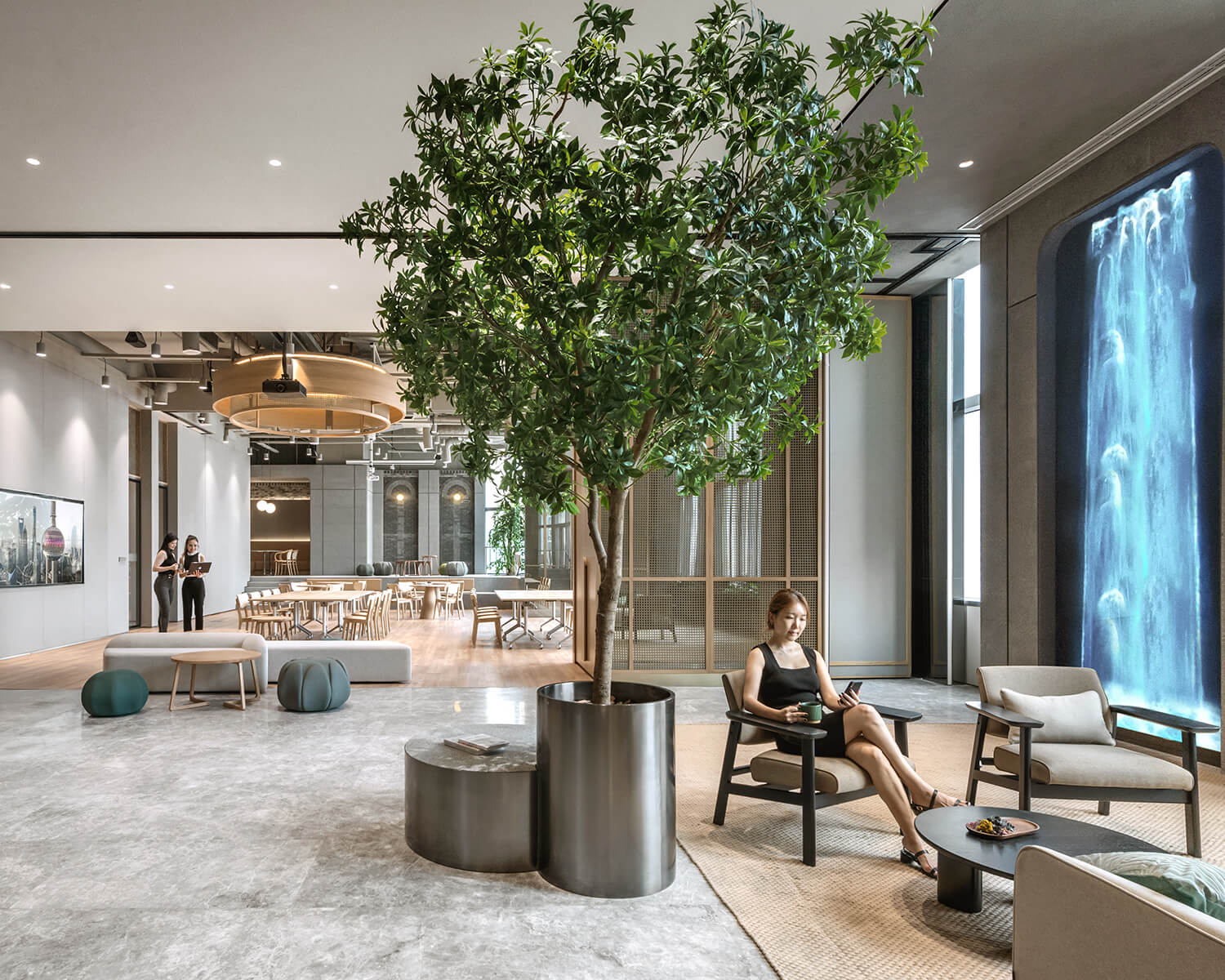 Merging technology with nature, a soaring electronic screen in the amenity space’s entryway projects images of a waterfall when it’s not displaying event information.

With reservations maxed out daily in its inaugural months, it seems the welcoming gestures at the hybrid social–work space have indeed had their intended effect. 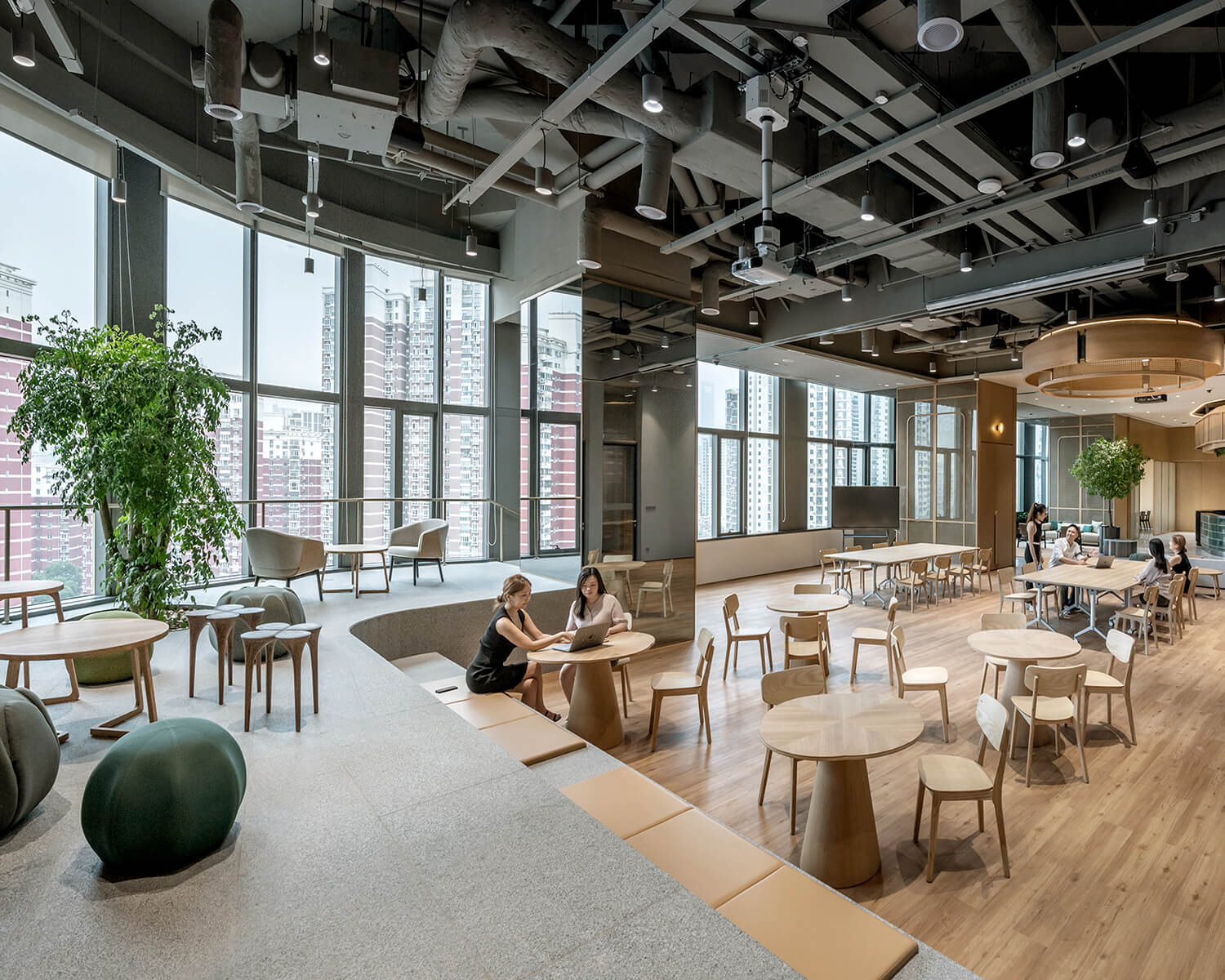