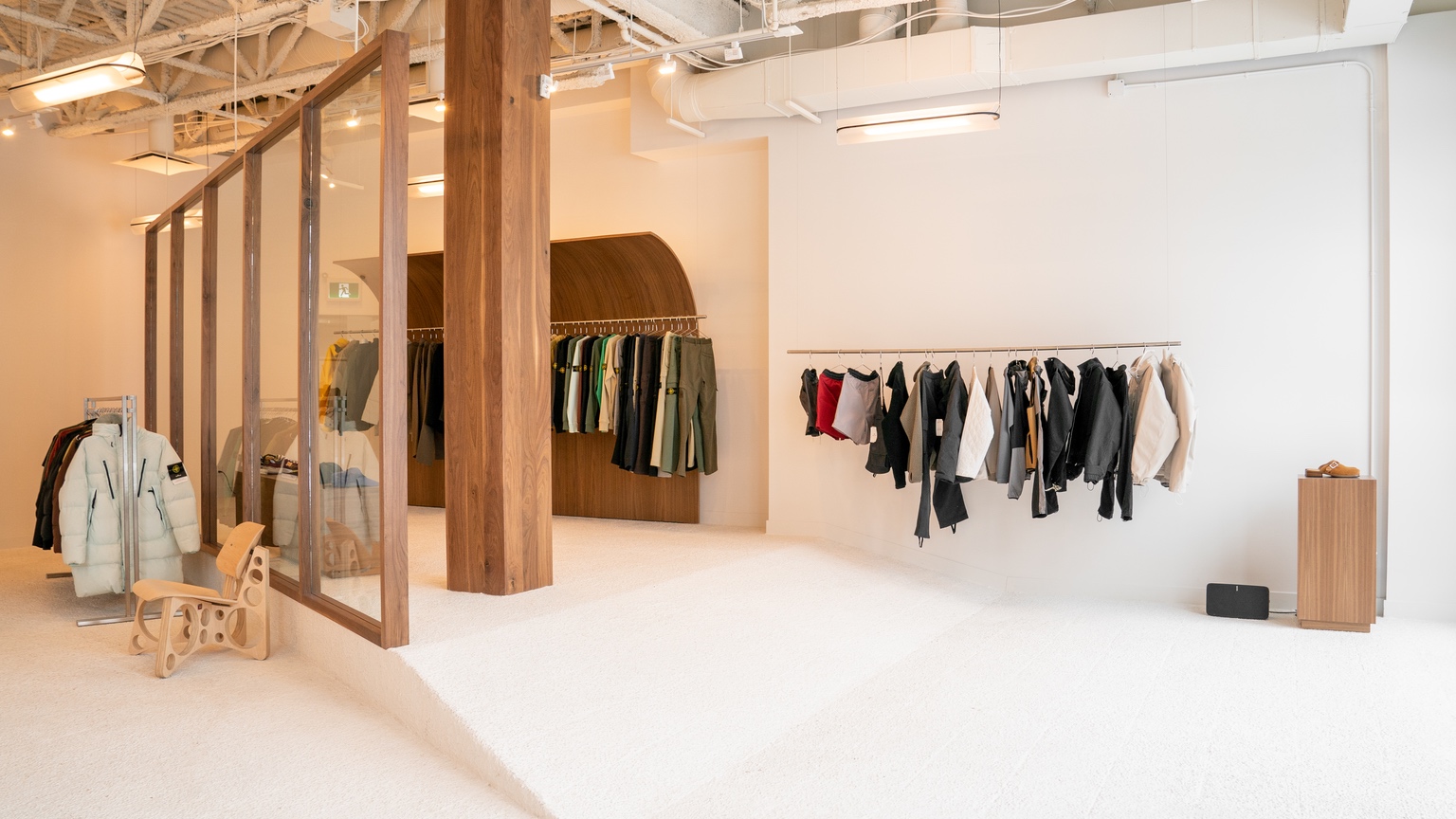 Since 2016, Edmonton’s ANNMS Shop has been a fashion-forward destination for elevated takes on utilitarian clothing — think carefully crafted cargo pants and long-sleeve T-shirts made by cult-favourite menswear brands. Last year, when the time came to relocate to a new storefront, the retailer called up Montreal-based Studio Kiff, impressed by the firm’s recent design for skate label Dime’s Montreal flagship.

While ANNMS’s previous location had been a nondescript, all-white affair that stayed true to the store’s name, this time the owners sought something a bit more impactful. In turn, Studio Kiff partners Hélène Thiffault and Rachel Bussin devised a space that is understated but richly detailed, accented by a few purposeful interventions that inject hits of warmth and personality. 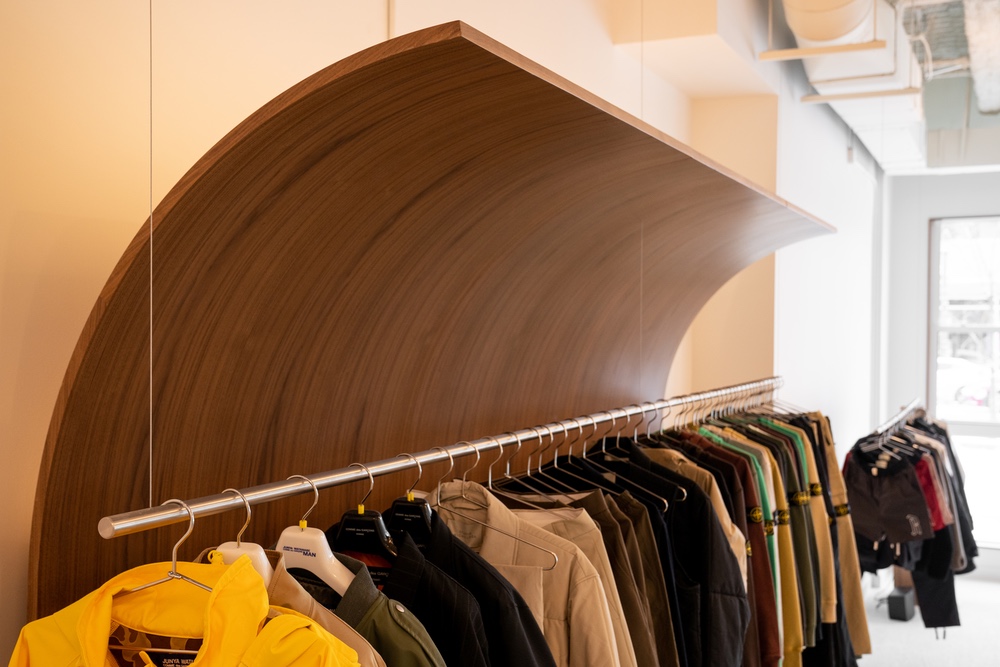 “We took a lot of inspiration from the clothes themselves,” says Bussin. “They’re clothes that could be worn in the city or the outdoors. So when it came to materials, we wanted things that would reflect both.”

This approach is immediately evident from the shop’s floor: a white surface that, upon closer inspection, is actually a mosaic of small stones covered in grout. Apart from being a simultaneous nod to pebbled trails and gritty streets, this subtle textural detail also speaks to the boutique’s rich assortment of fabrics, which often need to be felt to be truly appreciated. Building on this idea of retail space-as-landscape, ANNMS is divided into two elevations, with a sloped ramp leading up to a hill-like platform. 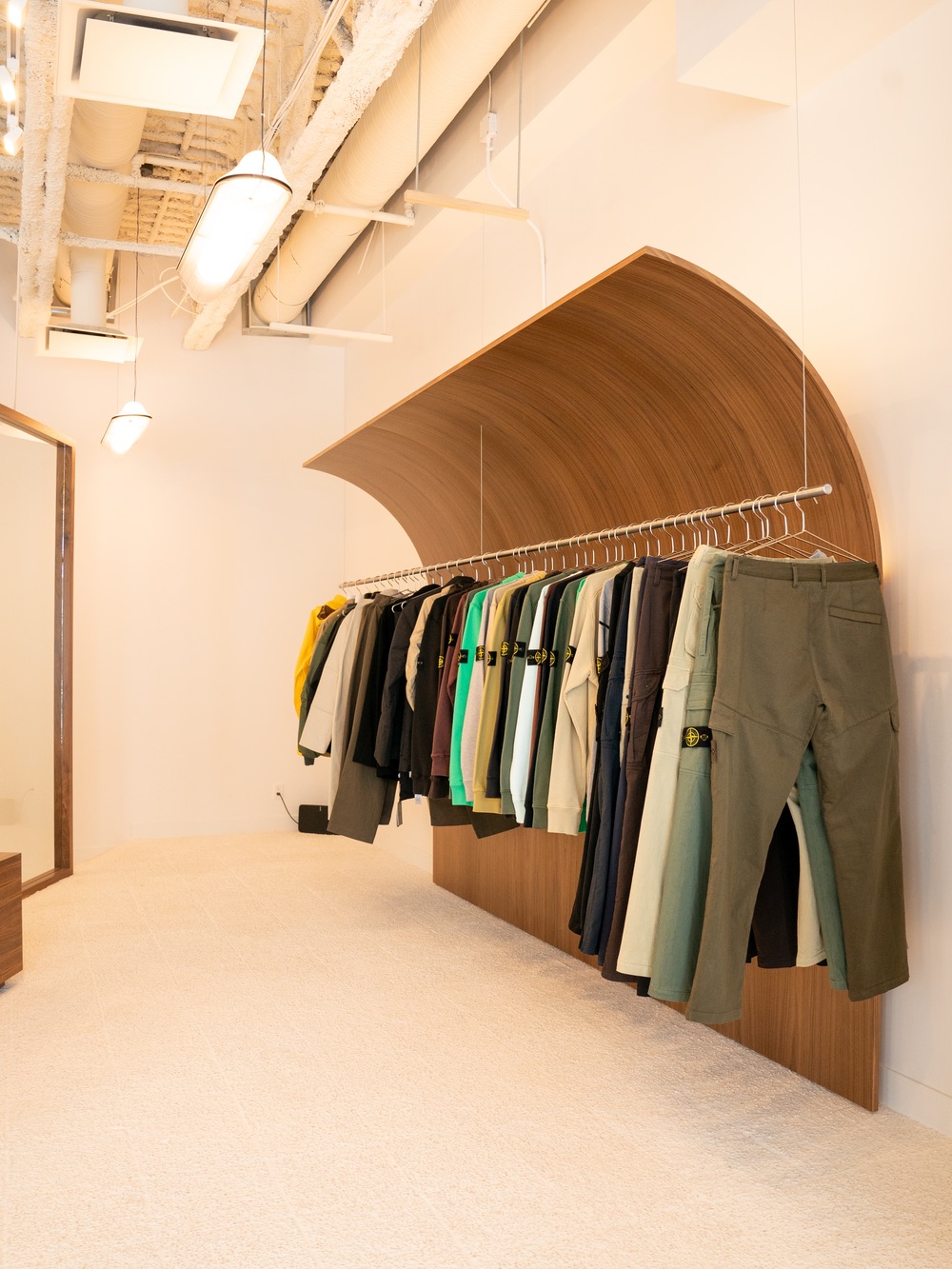 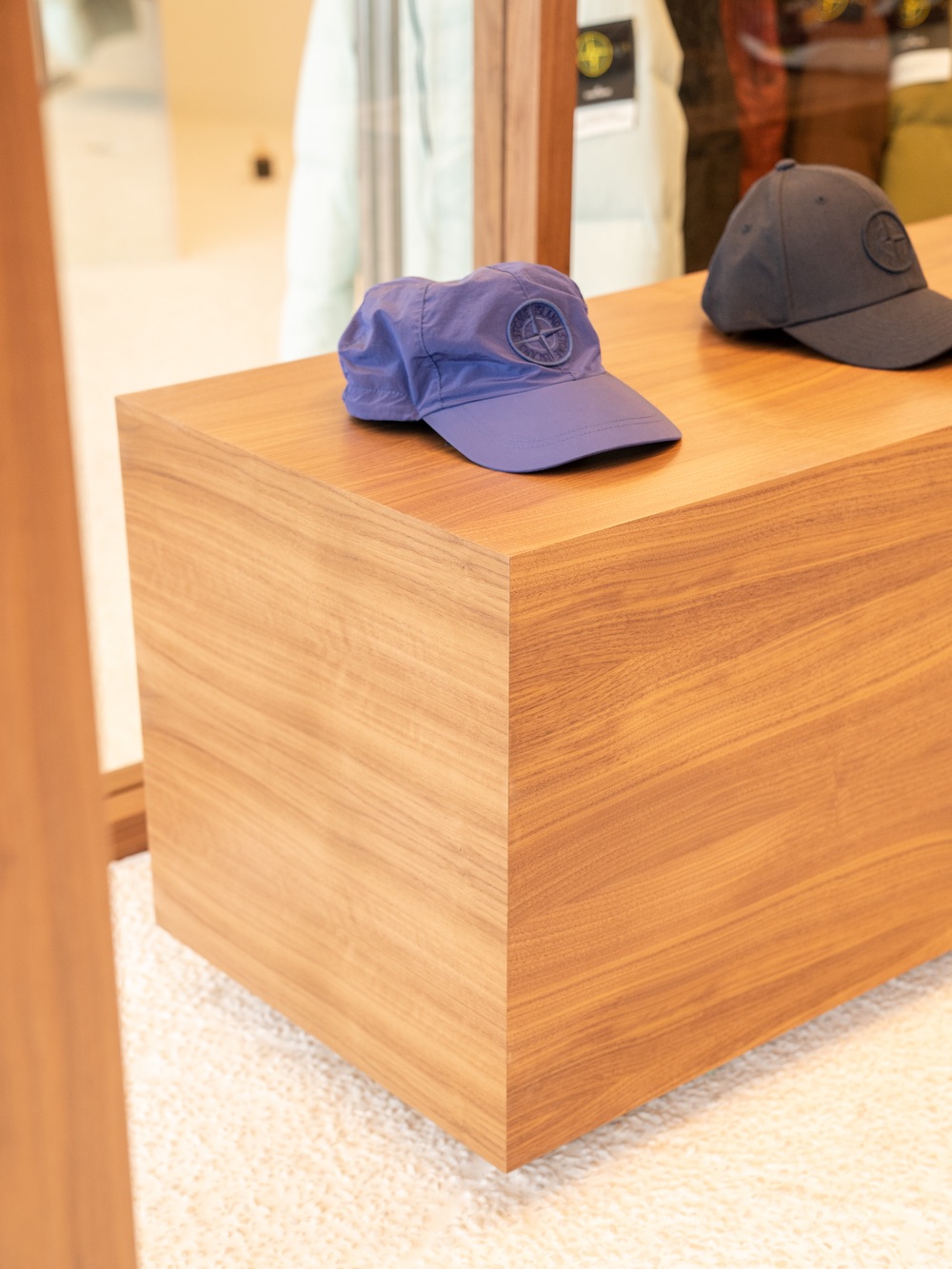 Up above, Vale pendants by Vancouver’s ANDLight illuminate clothing rods that appear to hover in mid-air, suspended by thin aircraft cables. Behind one of these racks, a backlit sculptural wave of curled cherry wood creates a playful backdrop. This display is just one of several millwork pieces fabricated by local workshop Studio Bramble, which also built cherry plinths that act as podiums for the store’s curated selection of cool sneakers and suede clogs. 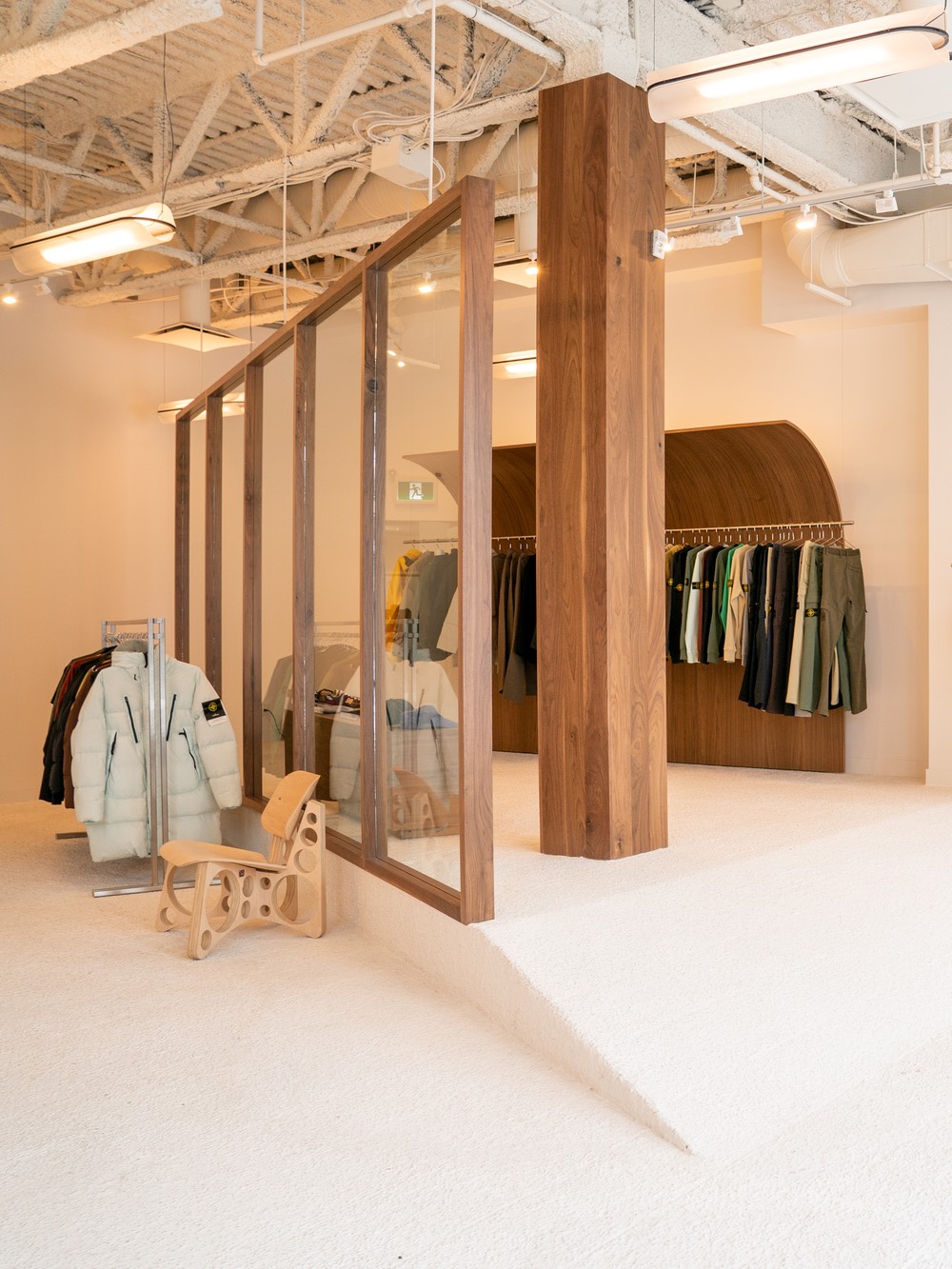 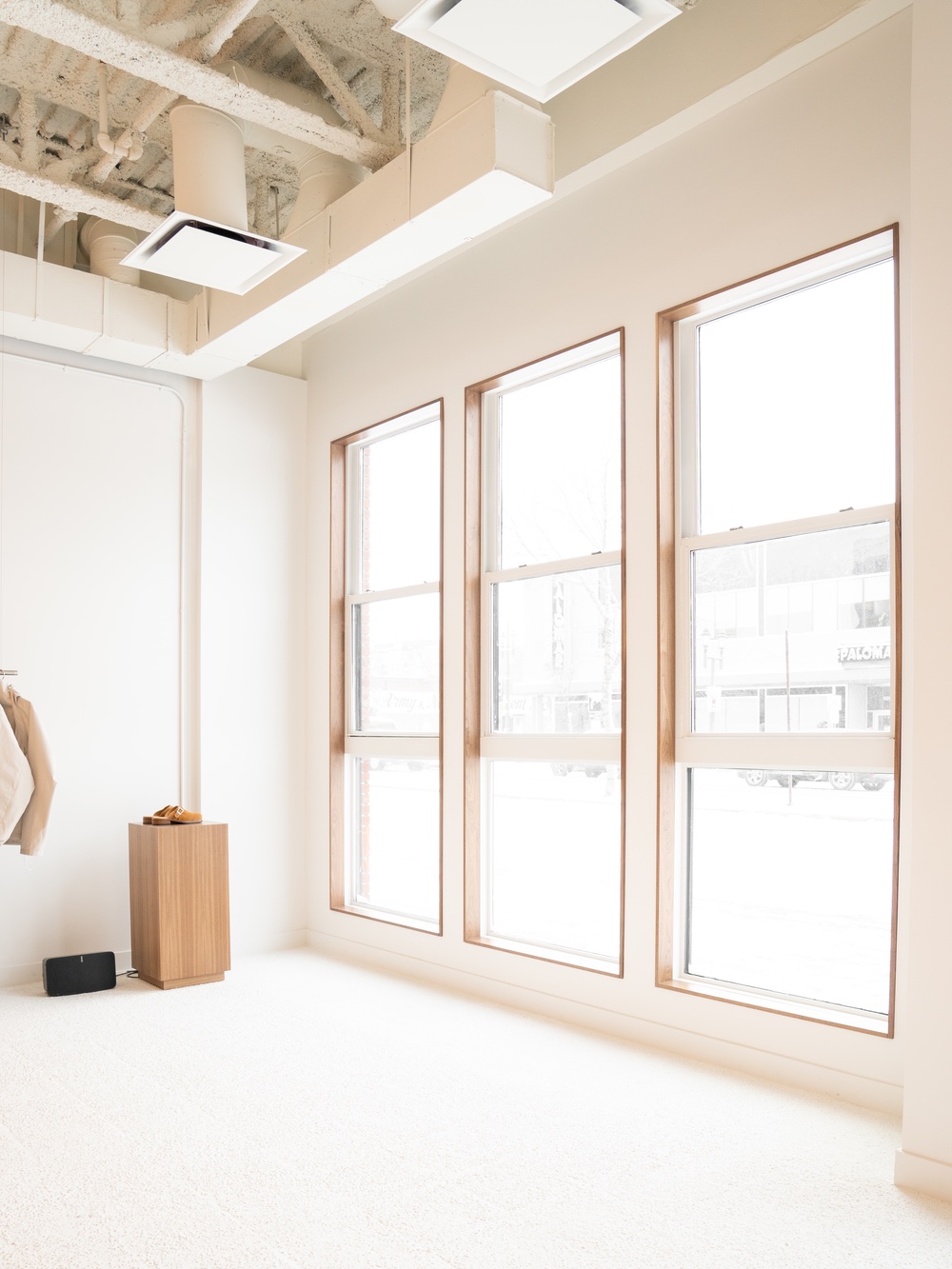 Another prominent element is a cherry-framed partition installed between the store’s two main zones at a 45-degree angle. Bearing cheeky resemblance to the partially framed walls you might find at a construction site, the divider ties in perfectly with the well-crafted workwear around it. “We wanted to add interest while still being visually unassuming. It’s that idea of framing the space and the clothing — really showcasing these pieces like art,” says Bussin. Cherry frames around the trio of windows at the front of the store echo this clean geometry. 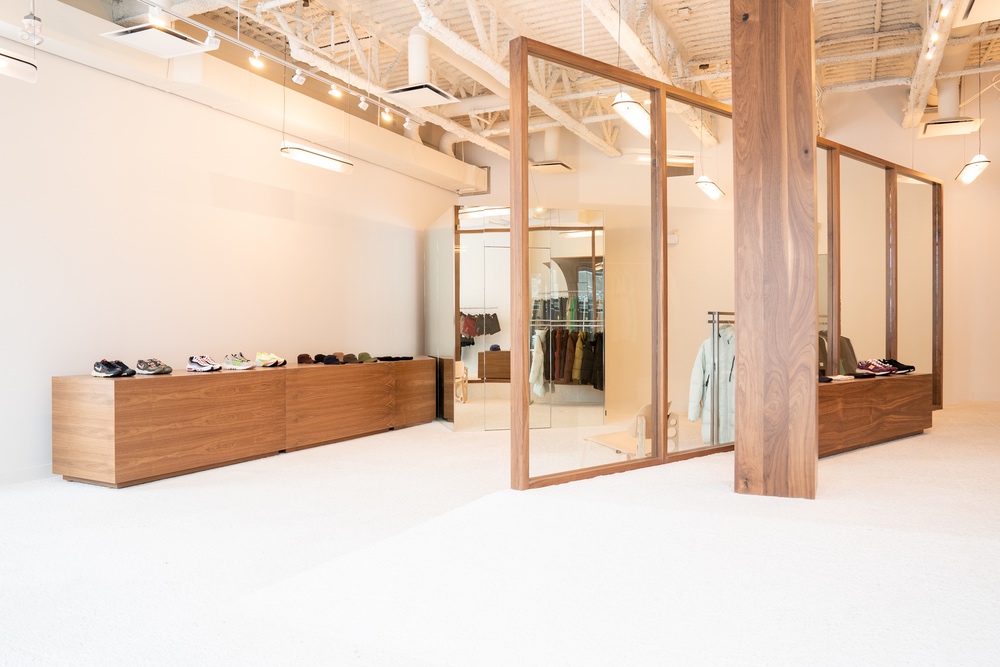 When it comes time to try on a hoodie or overshirt, shoppers head to a large mirrored box in the store’s far back corner. Reflective cladding creates an intuitive understanding of the cube’s inner functionality, but it also gives it a surreal beauty. “It wouldn’t be safe for birds if it was outside,” jokes Bussin. “We looked at it as its own object or piece of art.”

The store’s final statement accessory is a maple plywood chair by designer Tom Sachs, who is also a frequent collaborator of Nike. Like the rest of ANNMS Shop, it’s a perfect demonstration of how fashion can pair with design.