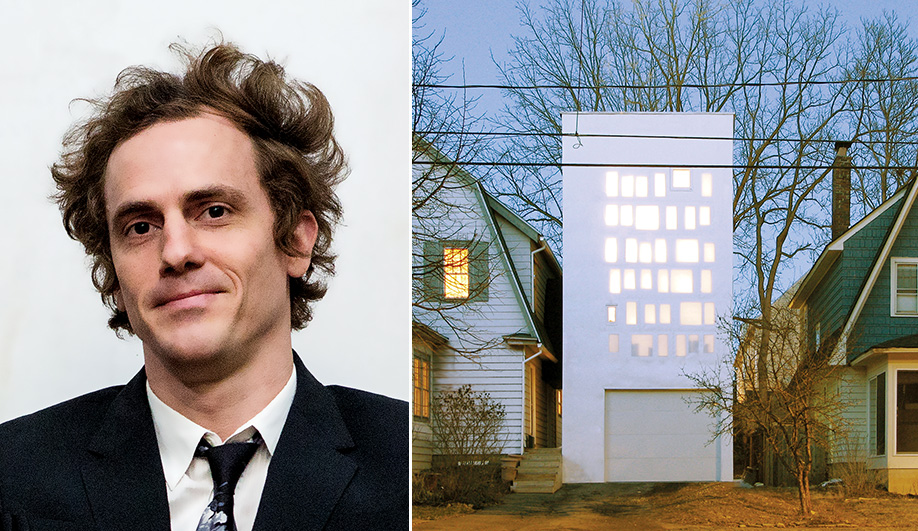 To minimize distractions and add privacy to the new addition, a series of irregularly shaped windows is obscured by translucent silicone. rn 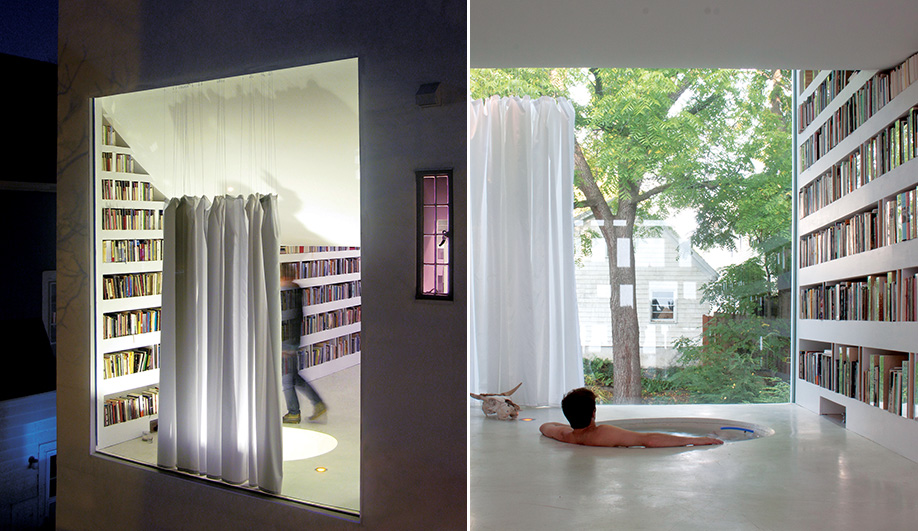 Left: The steeply sloped library ceiling allows space for a bowl-shaped reading room above. A simple curtain blocks the views of neighbours. Right: A deep, integrated soaker tub may seem like an unusual amenity for a library and writing studio, but it was one of the owners’ few requests. 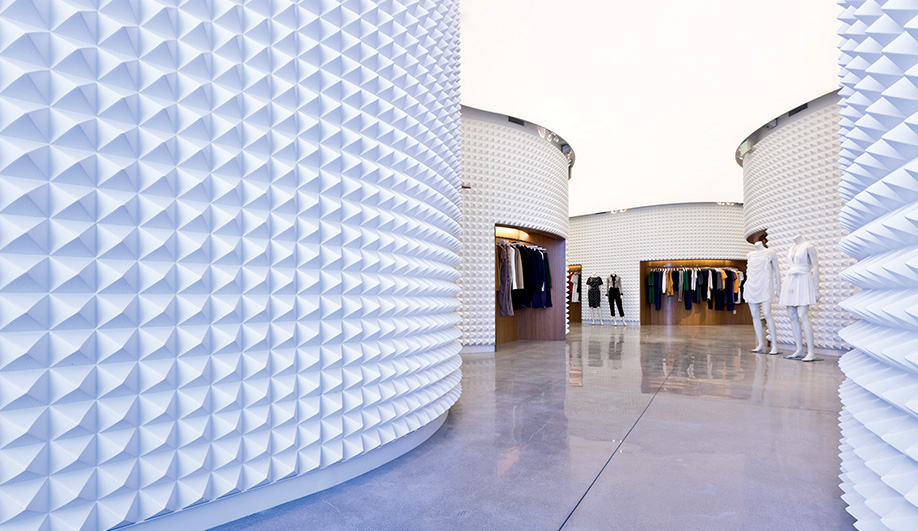 3.1 Phillip Lim flagship, Los angeles, 2008:rnSnaking walls slice the interior of the store (completed in collaboration with Giancarlo Valle) into five separate, intimate spaces. All of the exteriors are clad in pyramid-shaped acoustic foam, but on the inside each has a unique finish. 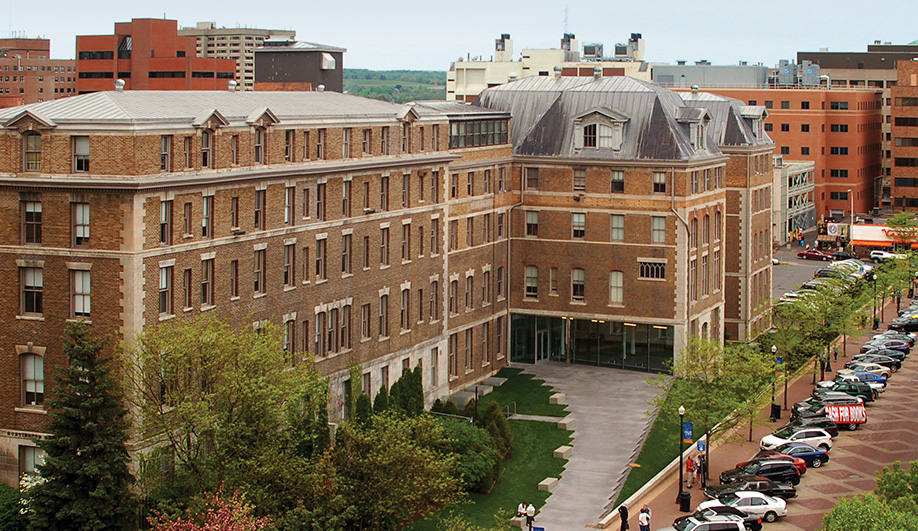 Huntington Hall, Syracuse university, New York, 2013:rnTo establish a more inviting entrance, with a better connection to the surrounding campus, the firm cut the building open, demolishing a length of masonry wall on the ground floor and replacing it with glass. 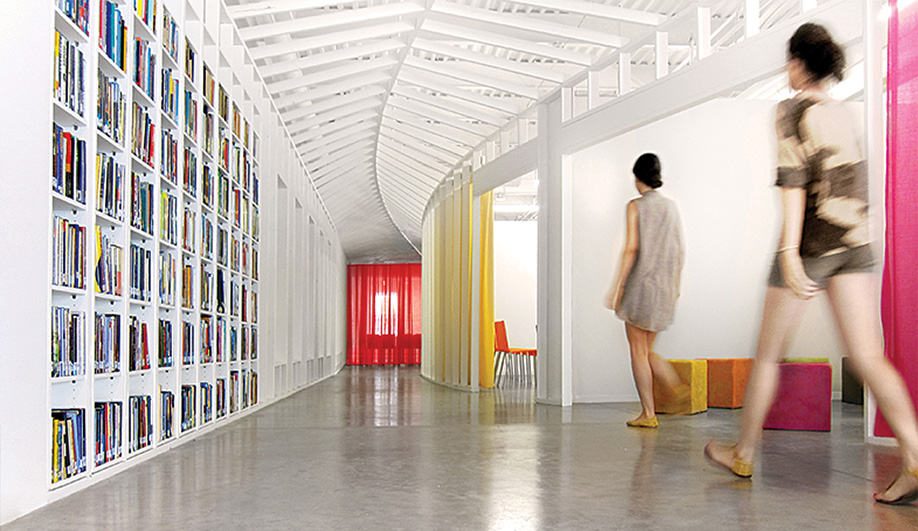 La Casita, Syracuse, New York, 2011:rnRiffing on balloon frame houses, this Latin American cultural centre uses a simple wooden spine, stud walls and curtains to divide the space without sealing off the separate rooms. It was inspired by temporary structures built in the Bronx in the 1970s. 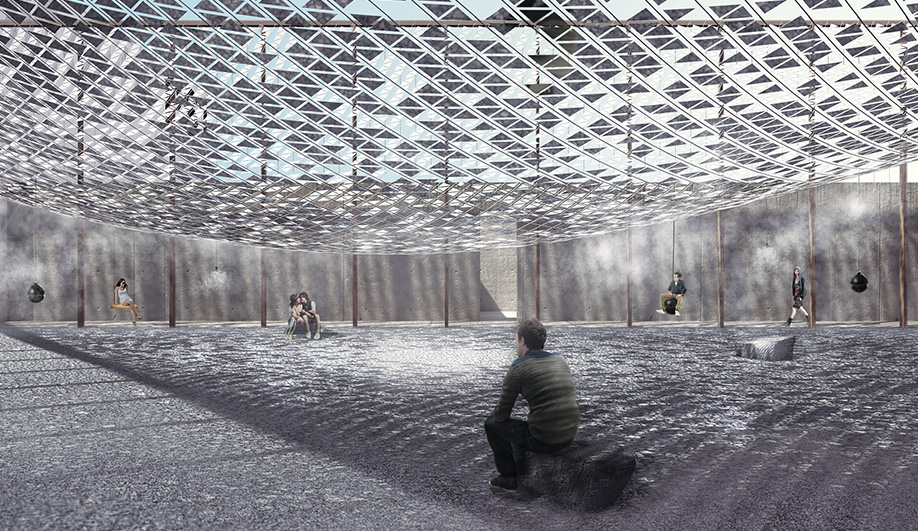 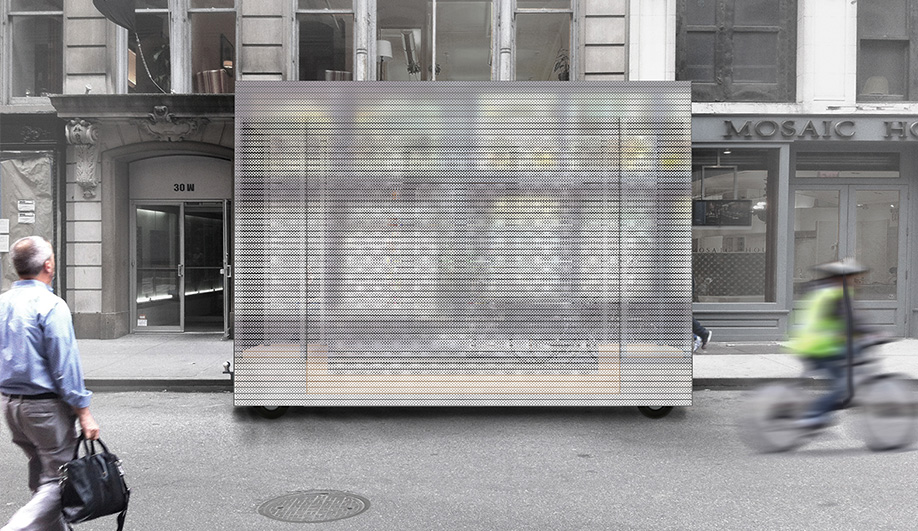 Van Alen Institute, New york, 2014:rnWith permission from the city, the institute, which supports public architecture projects, now spills out into the street. A permanent trailer made from semi-reflective perforated metal screens provides a new facade and doubles as a flexible, mobile event space.

Backstory
Though partners and projects come and go, the one constant at PARA-Project is Jon Lott, a Harvard graduate who thrives on collaboration. The firm’s portfolio is equally varied, with residential, commercial and educational work that challenges convention. Lott started the firm to tackle side projects while working in the New York offices of OMA, and later REX. He envisioned PARA as a practice that would focus primarily on architectural ideas competitions and conferences. Within a few years, however, hypothetical design briefs gave way to concrete commissions on both sides of the continent, including a small bar in Brooklyn, and a store in Los Angeles for fashion designer Phillip Lim.

Today the studio’s four core designers continue the synergistic work ideology, frequently partnering with others. In addition to his own firm, Lott started a team called Collective-LOK (CLOK), with friends William O’Brien Jr. and Michael Kubo, that pools ideas and resources to undertake larger projects and participate in high-profile competitions. This on-the-fly collaboration has already led to a competition win to design a new space for the Van Alen Institute in Manhattan, and to CLOK’s nomination as a finalist in the 2014 edition of MoMA PS1’s Young Architects Program, which commissions an emerging architecture firm to design a tem­por­ary courtyard installation each summer.

Tipping Point
In 2009, when Lott moved from New York to teach at Syracuse University, he received the steady string of commissions needed to make the studio a full-time undertaking. For the university, the firm renovated the entrance to Huntington Hall, which had been relocated to a back alley in the 1970s. The solution was to bring the entrance back to the campus’s main axis, and to make the building infinitely more inviting by demolishing the lower level of a load-bearing masonry wall, replacing it with an expansive glassed-in gathering space. “It was about opening a hole rather than building something new,” says Lott.

Earlier this year, the firm completed a dramatic modern addition to a more traditional private residence in Syracuse known as Haffenden House. Though the brief was straightforward – create space for a writing studio and library above a garage – the resulting structure is unlike any other workspace. The facade has a grid of irregularly shaped windows visible through a translucent silicone fabric usually used for stadium roofs. This covers the entire house, keeping distractions to a minimum by blocking views to the street while letting in natural light. Inside, the floor of the second-­storey library is interrupted by a deep, integrated soaking tub for moments of quiet contemplation; and the third-floor reading room is shaped like a bowl, with a soft floor that encourages lounging anywhere. The project has already brought in numerous other commissions, as well as plenty of visits from curious locals. “For the neighbourhood, it’s clearly a misfit,” says an unapologetic Lott.

R+D
Reinterpreting architectural conventions has become one of PARA’s favorite exercises. For La Casita, a Latin American centre in Syracuse completed in 2011 on a limited budget, Lott reimagined a balloon frame house as an organizational system to be inserted into an existing warehouse. Inspired by makeshift homes and gathering places constructed in the Bronx by the

Latin American community after buildings there burned in the 1970s, Lott created a flexible 418-square-metre skeletal interior that serves a wide range of programming. “It was all about paring it down to the absolute minimum for the division of spaces,” he says. “What can you do with the typology of the house when it’s liberated from having any exterior walls? It’s just a wooden frame with some curtains and chairs.”

When asked to participate in the 2014 com­pe­tition for MoMA PS1’s Young Architects Program, Lott and his partners at CLOK attempted to visually extend the museum’s courtyard beyond its physical boundaries. Their design, Mirror Mirror, proposed an enormous, sagging roof structure made from thousands of small triangular mirrors, which would pull views of the city into the enclosed space while reflecting the activities inside back out to passersby.

On The Books
PARA is now at work on a pavilion for Syracuse University’s School of Architecture; and a private residence made up of three small buildings, set on a steeply sloped site in New York State’s Finger Lakes region. But its most closely watched project is a new street-level office and event space for the Van Alen Institute in Manhattan, which is like-minded in its co-­operative ventures. CLOK’s competition-­winning design, scheduled for completion later this year, uses five types of screens and a flexible floor plan to create a shape-shifting space. It can be easily reconfigured for exhibitions, lectures and other events, while accommodating the daily needs of staff – a fine example of the team’s ethos of adaptability and collaboration.