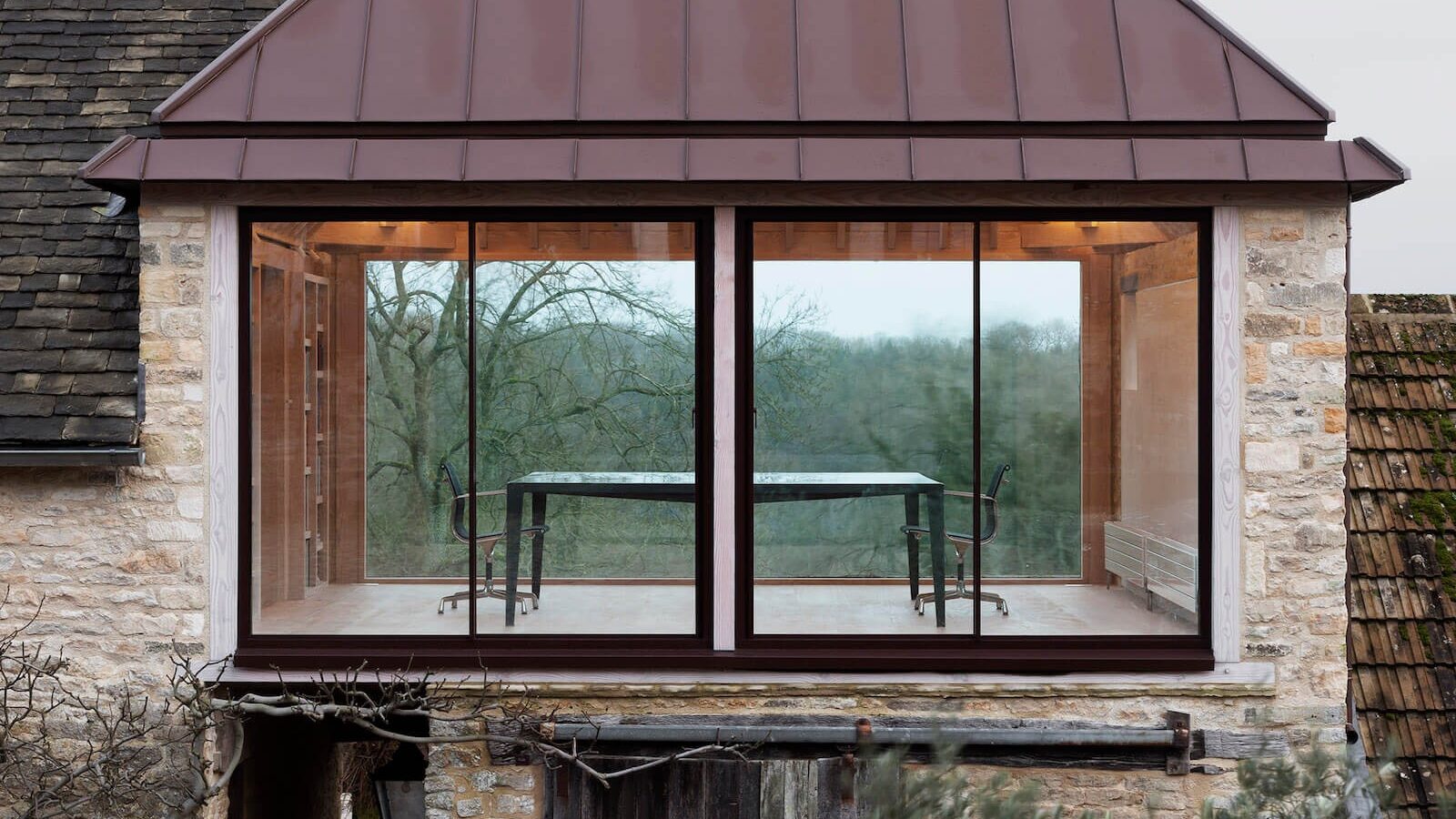 In Gloucestershire, England, the former Easter Park Farm has undergone the final stage of its transformation into the designer’s rural studio.

A rustic barn in the English countryside would seem both the ultimate idyll and the conversion project of a lifetime. All that would be needed is a site-sensitive architect to thoughtfully bridge old and new. At Easter Park Farm, a model acreage created for the Woodchester Park Estate in the mid 19th century, the architects are in fact also the client. Over the past decade, Richard Parr’s eponymous firm has been slowly transforming the property’s many barns — a hayloft, a cow shed, a dairy barn and a bull pen — into its rural home (the practice also has an office in London).

The most recently completed interiors take up residence in a former grain loft, now home to a breakout space and meeting area as well as a studio and library for Parr, whose own home sits across from the office site. The project took 10 months to complete, reflecting the firm’s steady growth and its need for more space. It’s a resplendent homage to the historic building with handsomely crafted modern interiors.

Entrance to the grain loft, with a breakout space for small meetings.

The ground-floor entrance makes a welcoming first impression. Framed by pivoting steel doors clad in wood siding, the former cart bay is furnished with a rustic wood bench — cut from a single tree trunk — and a table by Eero Saarinen. The old stone walls were retained, and the floor is laid with stable block salvaged from another part of the farm. An industrial steel stair leads up to the office spaces.

Dramatic and swanky, the studio space is furnished all in black, with rosewood leather–upholstered mid-century modern furniture, and features a log-burning steel fireplace. Lined in wood wool panels, the pitched roof provides a textural and tonal contrast to the finishes, which also include recycled-rubber flooring and a wood panelled wall that was handmade by Berthold Lubetkin (a British modernism pioneer who once lived in a farmhouse in a neighbouring village).

The studio space leads into the architect’s new office, which boasts its own magnificent ceiling: a majestic pyramidal pitched roof crafted from limed Douglas fir. 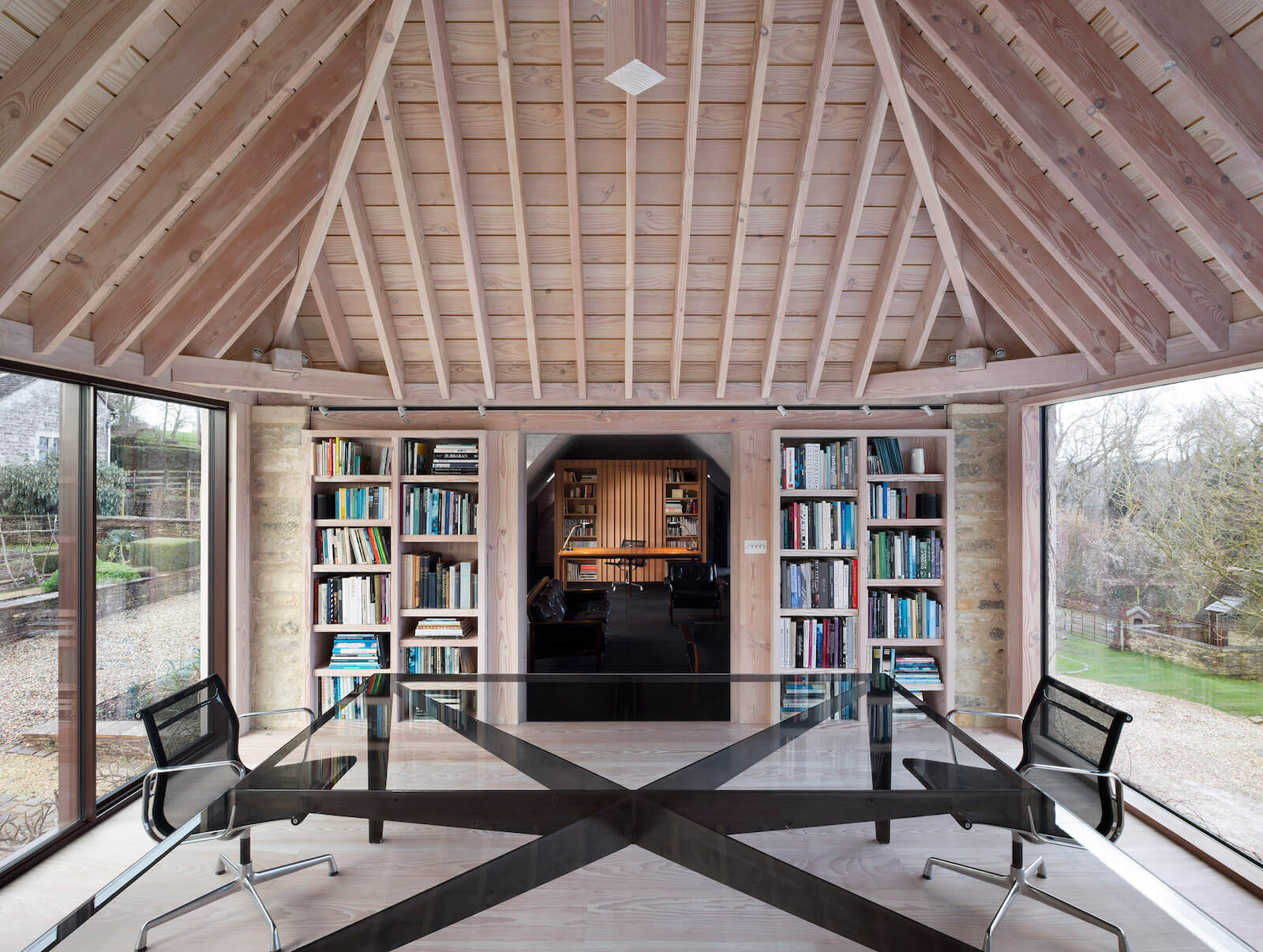 With such a breathtaking focal point, the rest of the space is fittingly kept fairly simple. At the centre of the room sits a 2.5-metre glass table designed by Parr, himself. It’s paired with Vico Magistretti’s Silene chairs, and simple wood bookcases flank the entrance. The only embellishment comes in the form of pastoral views through the sliding floor-to-ceiling windows.

Combining old and new in a harmonious whole, the rural office of Richard Parr Associates is complete at last. And though featuring a host of refined contemporary interventions, it still blends right into its Cotswold surroundings.

In Gloucestershire, England, the former Easter Park Farm has undergone the final stage of its transformation into the designer’s rural studio.