Berlin’s Museum for Architectural Drawing
Designed by Moscow firm SPEECH, the playfully stacked structure is etched with the history it holds inside. 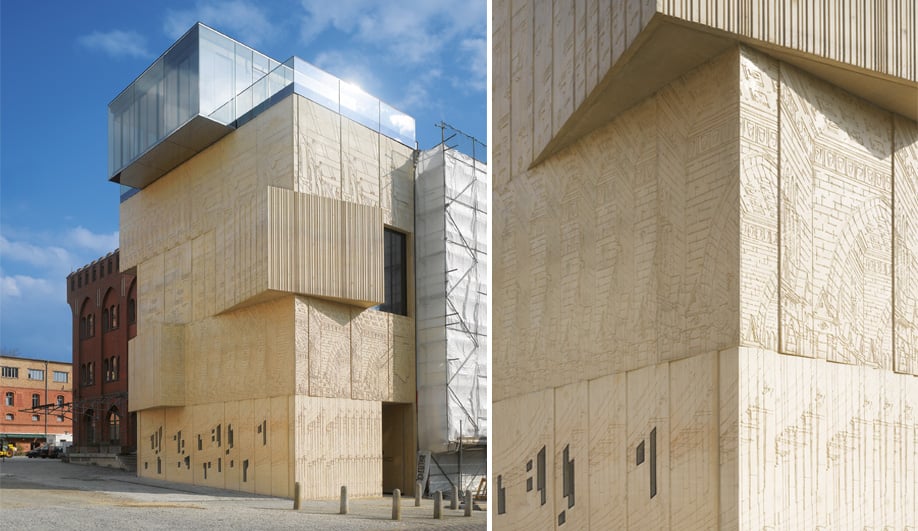 Made up of four concrete volumes topped by a glass box, the building adds a modern profile to its historical Berlin neighbourhood.

Architect Sergei Tchoban is a long-time collector of architectural drawings – from 16th-century French architect Cerceau to 1980s-era Gehry – and a prolific draftsman himself. His substantial archive prompted him to form the Tchoban Foundation in 2009. Now he has fulfilled his ultimate goal by designing the striking Museum for Architectural Drawing in Berlin, which presents his collection to the public. “It’s a very personal pro­ject. It has been my dream for some time, because I’ve been drawing for more than 40 years and collecting for over 10,” he says.

He conceived the 498-square-metre building, which opened in June, with Sergey Kuznetsov and their Moscow firm, SPEECH (he is also a partner at NPS Tchoban Voss in Berlin). Located on a landmark cultural corner in Prenzlauer Berg, it consists of four concrete volumes and a top floor in glass, with an elevation reminiscent of sliding drawers.

The facade reveals what is inside via graphic impressions. Designed by Berlin graphics studio Hiemann und Schwantes, the imprints duplicate drawings by Pietro di Gottardo Gonzaga and Angelo Toselli, two Italian set designers active in Russia during the 1800s. The contrast between the concrete shell and the relief-style sketches “is like a dialogue between fine and strong, sensitive and archaic,” says Tchoban.

As well, the juxtaposition between the concrete of the first four floors and the glass of the uppermost storey communicates their separate functions: the lower floors house the archive and exhibition spaces, while the top floor, which opens onto outdoor terraces, is used for private events and as a workspace.

Dedicated to reawakening an interest in the lost art of architectural drawing in an era of photorealistic 3‑D renderings, the institution will present three exhibitions per year from its permanent collection and others on loan from leading international institutions.