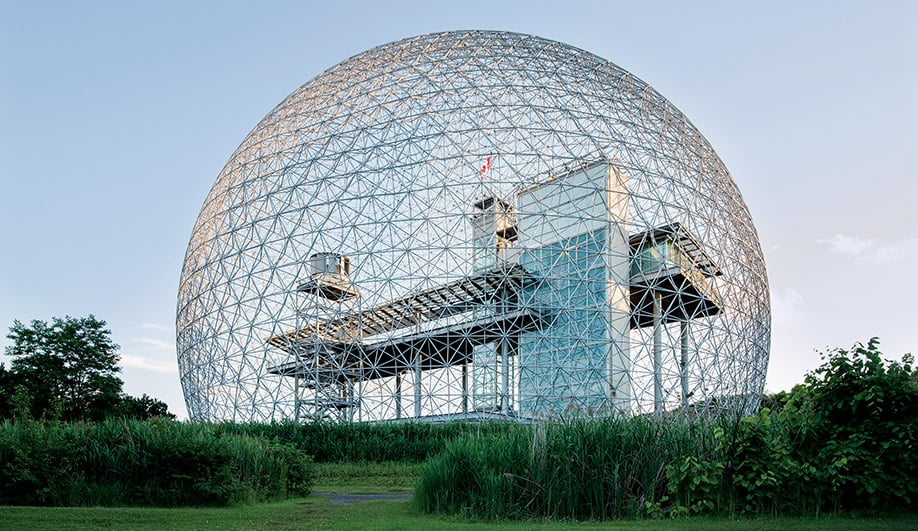 Fifty years ago at Expo 67 in Montreal, no pavilion captured the zeitgeist better than Buckminster Fuller’s massive geodesic dome for the United States of America. A 20-storey-high skeleton of steel polyhedrons sheathed in an acrylic skin, it relayed the moment’s collective desires: lunar colonization, salvation through technology, controlling the world within a giant, round ball.

Then as now, the dome spanned the ages in its evocations: the eons-old moon, the 19th-century time machine of H.G. Wells, the 1960s space-travel extravaganza. Fuller himself predicted future miles-wide versions of the dome to enclose entire cities within carefully monitored microclimates – the acrylic bubble sealing off the rest of the earth rather than expanding over it. Thus our usual manifest destiny inflected from outward to inward, for a while.

A 1976 fire devoured the dome’s acrylic skin in minutes but left the sturdy shell of steel polyhedrons intact. Naked and abandoned, the structure lay dormant for 19 years while the world shrugged off utopianism and carried on shopping. But in 1995, the dome surged back to life as the Biosphere Environment Museum, with a revamped interior by local architect Éric Gauthier. This use dovetails with Fuller’s own philosophy of the environment; he did not see technology as overriding nature but as being informed by it.

A few years before Expo 67, Fuller described in his writings how this energetic-synergetic mode of building “discloses Nature’s own system of coordination. Possessing this knowledge and taking the design initiative, man can enjoy Nature’s exquisite economy and effectiveness.”

Now, 50 years after Fuller’s dome was created, it will be illuminated all year long, with a shifting rainbow of colours, in joint celebration of Montreal’s 375th birthday and Canada’s 150th. As you drive across the Jacques-Cartier Bridge, the dome still looms surreally large over Île Sainte-Hélène, the circular crown hovering above the island’s treetops like a rising harvest moon.