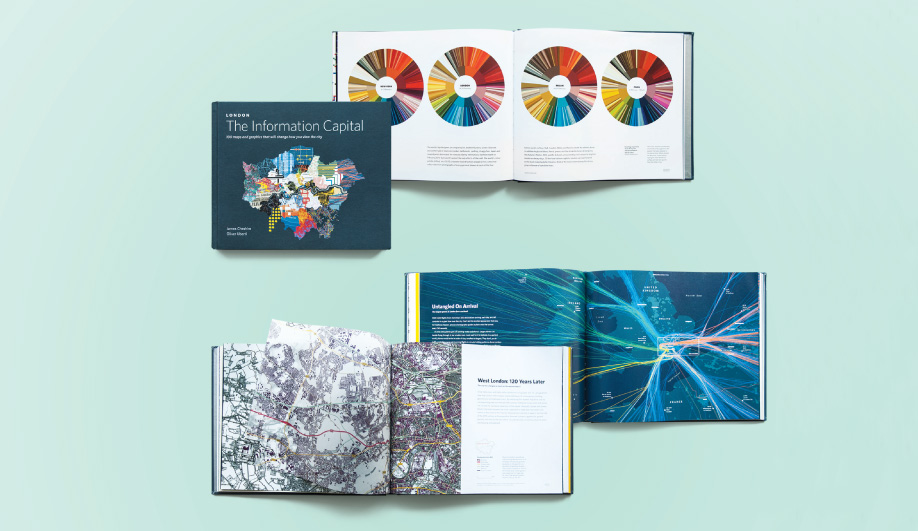 “This book couldn’t have been written 10 years ago,” say the authors of this dense visual reference for London, one of the most vibrant and diverse cities on earth. “Computers weren’t powerful enough.” It may seem like a curious statement about a pictorial filled with 100 cleverly designed maps that illustrate the city – the kind of book you can’t imagine navigating on a smart phone or a Kindle. Yet, according to geographer James Cheshire and graphic designer Oliver Uberti, computers have turned the place the Romans called Londonium into a data-rich metrop­olis, combining finely grained census information, open-data policies, digitization of paper maps, and the sharing of social media (if you used the fitness app Strava while biking through Hyde Park, they might have incorporated your journey in this book).

Cheshire and Uberti believe open data can prompt social change; and, when visualized in smart graphics, it can help us to think differently. Sorted into five sections that chart London’s geography, its inhabitants, where and how they travel, their well-being and pastimes, the maps reveal everything from air traffic patterns and a surprising amount of green space to a catalogue of objects excavated by archaeologists (a mesolithic flint scraper, an ice skate from the Middle Ages). Although the weaker entries place style before substance, the authors frequently inject wit into what could have become rote: a spread about famous ghosts is illustrated with a Pac-Man map, while data for tube journeys during the 2012 Olympics resembles a vivid electrocardiogram.

Like the city itself, this visual digest is not meant to be experienced all at once; it’s best enjoyed a few pages at a time. While some of the maps in this well-designed, absorbing book may diminish the city’s lustre by revealing less savoury tidbits about poverty, class and pollution, you will come away with a renewed sense of awe about 21st‑century Londonium.

Craille Maguire Gillies is a design and culture editor at The Guard­ian. She lives in London.