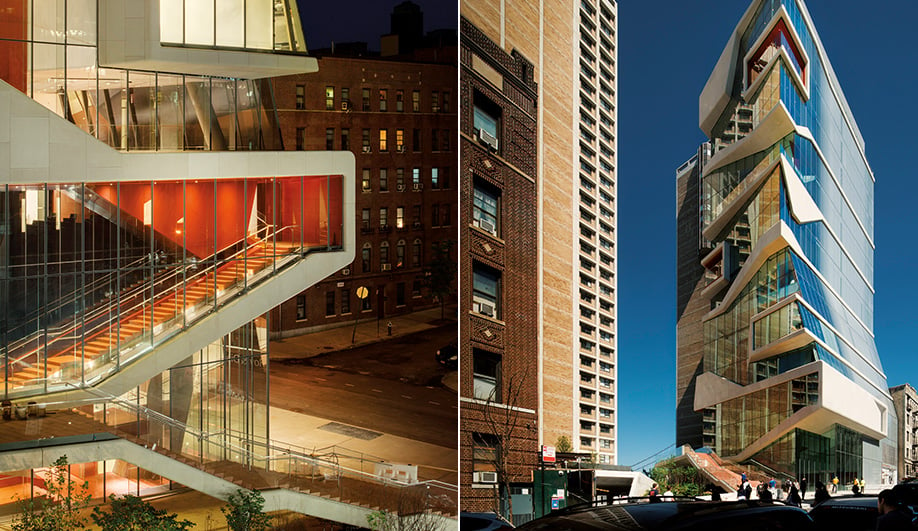 Left: Highly visible from the street, the centre’s public zones are stacked along the southern facade.nRight: The sidewalks of Haven Avenue seem to flow directly into the centre’s glazed lobby and up an exterior staircase.

For the Roy and Diana Vagelos Education Center at Columbia University, Diller Scofidio + Renfro use a grand set of stairs to connect students with students.

It’s natural that such a physics-defying form would be the source of both intrigue and trepidation. Diller Scofidio + Renfro, working in collaboration with Gensler, won the competition for the project in 2010, envisioning it as an extension of the campus where Haven Avenue overlooks the Hudson River from atop a steep rise. Seen from the south, the sidewalk seems to disappear into the structure’s lobby and exterior stairs; on the second floor, lobby and stairs merge, winding up from there to the building’s crown like a charmed snake. Weaving in and out through walls of clear and fritted glass, this concrete ribbon looks as if it might be holding up the entire 14 storeys, albeit wobblingly. 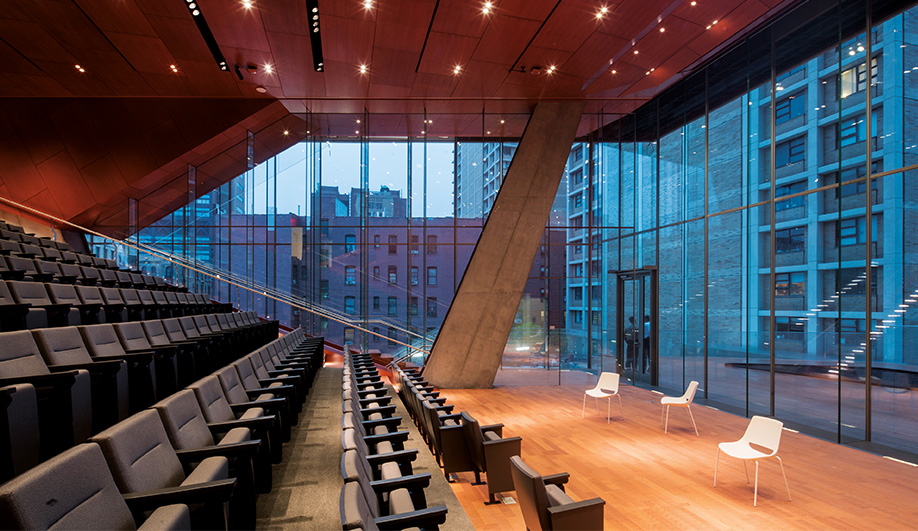 In fact, the centre derives its strength from a site-formed reinforced concrete core, while the external ribbon is the building’s stairwell. A New York high rise’s structural and circulation systems are usually entwined, says DS+R co-founder Elizabeth Diller, but she also notes that burying stairs within the building core dissuades people from using them. By stacking classrooms and offices to the north, cantilevering the facility’s stairwell outward so that it seems to emerge through the southern facade, “We created an opportunity to encourage students’ movement, and to make that an event for the public to see.”

Diller explains that her team “pushed and pulled” at the stair and its oversized landings – known collectively as the “study cascade” – to change their size, shape and orientation from floor to floor. At the building’s tapered top, for instance, the landing forks into a sun-drenched student lounge and a glass-enclosed conference room that overlooks the George Washington Bridge. Below this aerie, the cascade penetrates the envelope to become an enclosed balcony; elsewhere, it expands into an amphitheatre, shrinks into intimate zones for focused work, and spreads out across the floor plane to accommodate the student commons – a double-height space with a café and lounge at the heart of the building.

Space dictates program in DS+R’s scheme, and just like the public street that inspired it, the cascade also leaves nooks and crannies open to individual uses. By eschewing the standard switchback stair, DS+R has provided graduate and medical students with a university quadrangle’s worth of experiences.