Little House on the Lake
Toronto architecture studio UUfie craft a tiny house with mirror tricks in Ontario cottage country - a startling addition to a region populated by timber-clad cabins and prefabs. 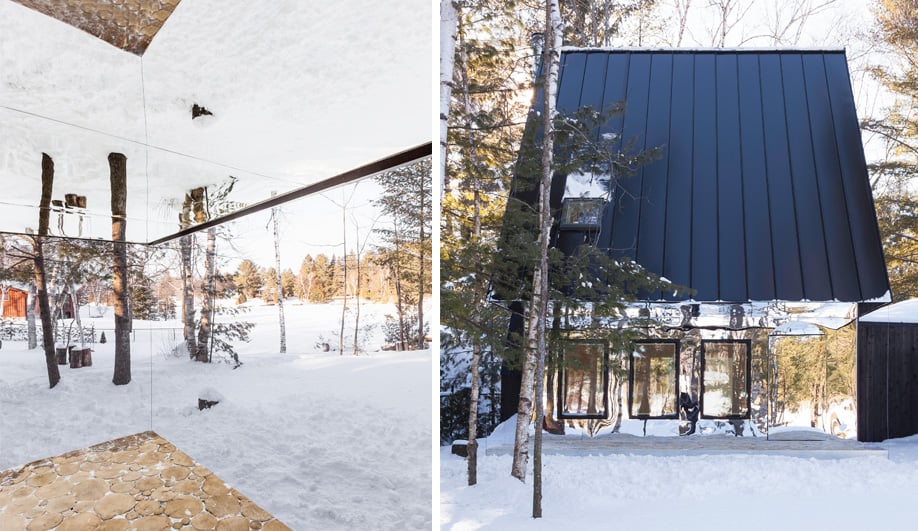 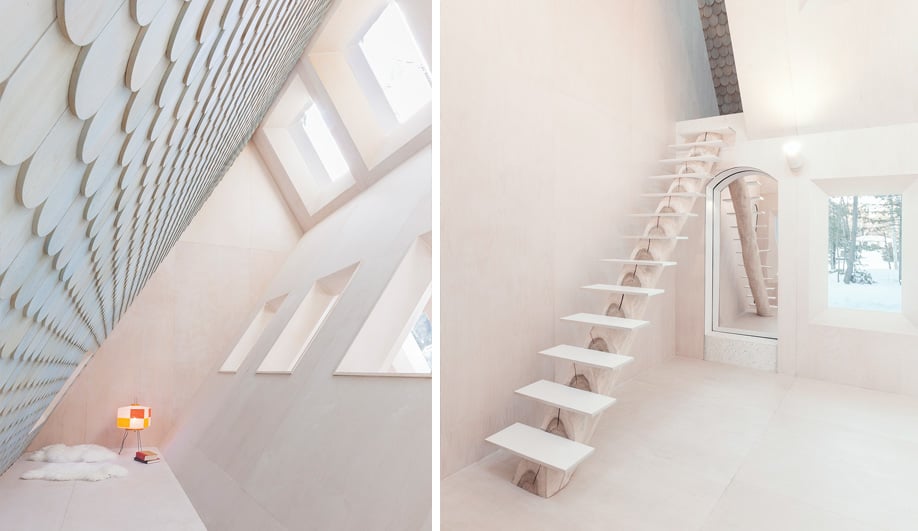 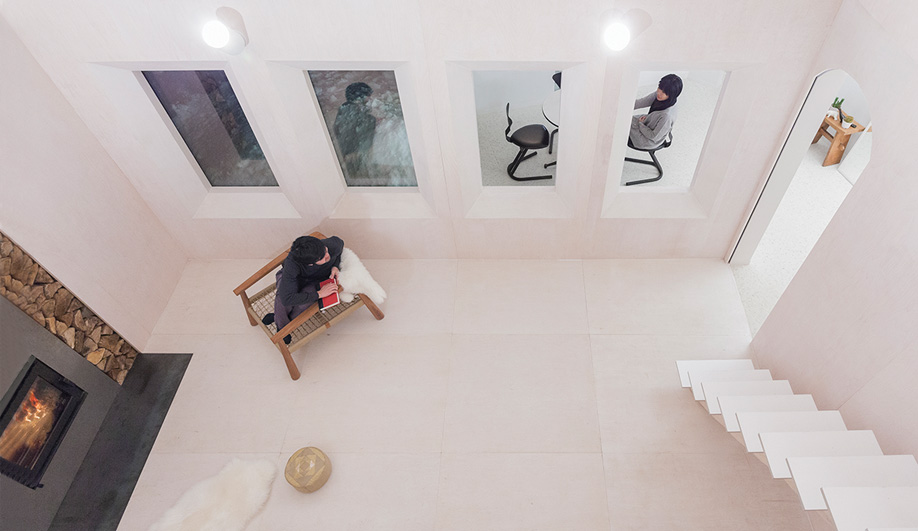 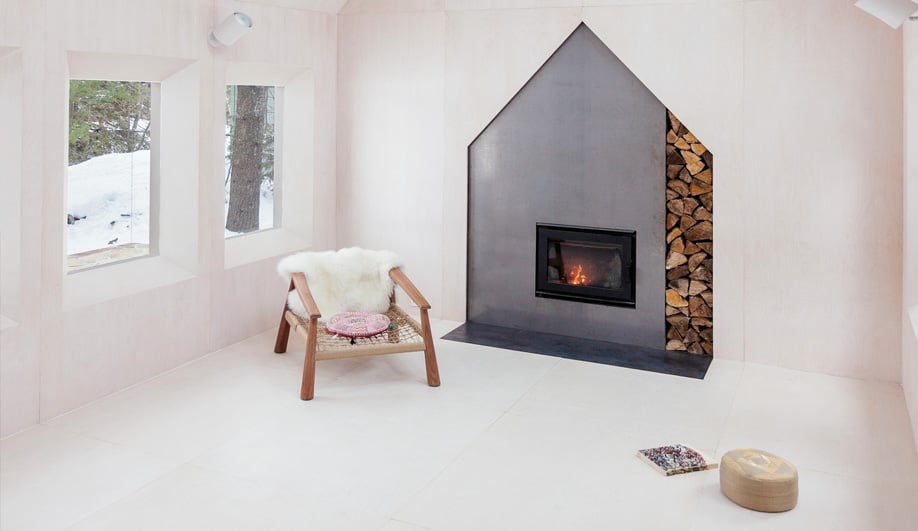 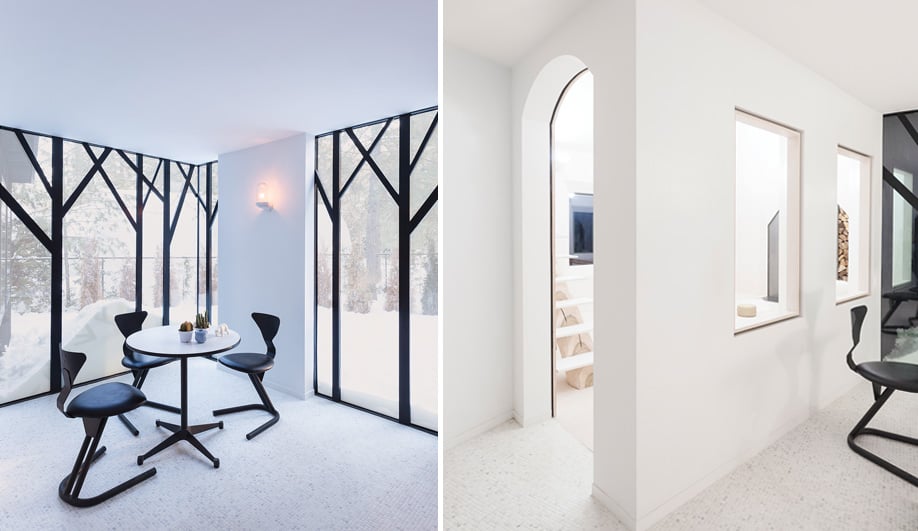 Left: Black steel window frames shaped like trees reinforce the merging of interior and exterior; Right: The two main volumes connect visually via a bank of windows and an arched doorway.

Lake Cottage is not what you would expect to find amid the cluster of modest homes that surround it. Its dramatically pitched roof, clad in black steel, and the charred vertical cedar siding contrast with the main cottage it adjoins. From within, however, architects Irene Gardpoit Chan and Eiri Ota have deconstructed the traditional ideas of interior and external space in a way that grounds the cottage perfectly in its part residential, part wilderness locale.“We like to soften the collision between inside and outside,” says Ota, “to create more than a wall: a graduated change, a buffer between two states.” He and Chan have been running their Toronto firm, UUfie, since 2009, after leaving Tokyo, where Ota worked at Jun Aoki & Associates and Chan with Arata Isozaki.

Japanese influences can be seen immediately, from the barely there interior created by cladding everything (the floors, walls and ceiling) in pale birch plywood, to the use of charred cedar on portions of the exterior. The scorching technique originated in Japan as a way to repel bugs and fire, though it has also found its way into contemporary designs by architects attracted to its visual richness.

But Lake Cottage is also considerably Canadian. To exaggerate the sense of wilderness, the architects applied a mirrored surface to one exterior wall and on the ceiling of the adjoining rooftop overhang, reflecting the nearby birch trees and evergreens. From a distance, the cabin all but vanishes in a maze of reflections. (The architects report, too, that birds and wildlife haven’t been confused by the shiny treatment).

Inside, Chan and Ota’s barrier-breaking approach is keenly felt in the main living space, which features a fireplace at one end, and 14 identical windows, each set within a deep reveal. Eight of them look out into the peripheral rooms: the terrace, the dining area and the loft space. The effect resembles a building within a building. Add to this the vaulted rooftop with the steepness of a Gothic nave, and UUfie has achieved a remarkable, tranquil spaciousness within the confines of a lakeside cottage.

Elements of the natural world have been further worked in to the interior scheme. Most prominent is the use of upturned cedar logs for the terrace flooring. Inside, glazed walls in the dining area were given tree-shaped window frames, and scalloped shingles line the sloped ceiling of the loft. Finally, the staircase is a colossal maple log, scraped of its bark, with wedges hewn from it to support white treads, each trimmed in silver aluminum leaf.

“We wanted to bring the trees inside and connect with the surroundings from within the cottage,” says Ota. More than that, UUfie has created a series of spaces that display a harmonious balance between sophisticated detail and uninhibited fun.

This article first appeared in Azure’s 2014 Annual Houses Issue and won a National Magazine Award for excellence in writing and art direction.