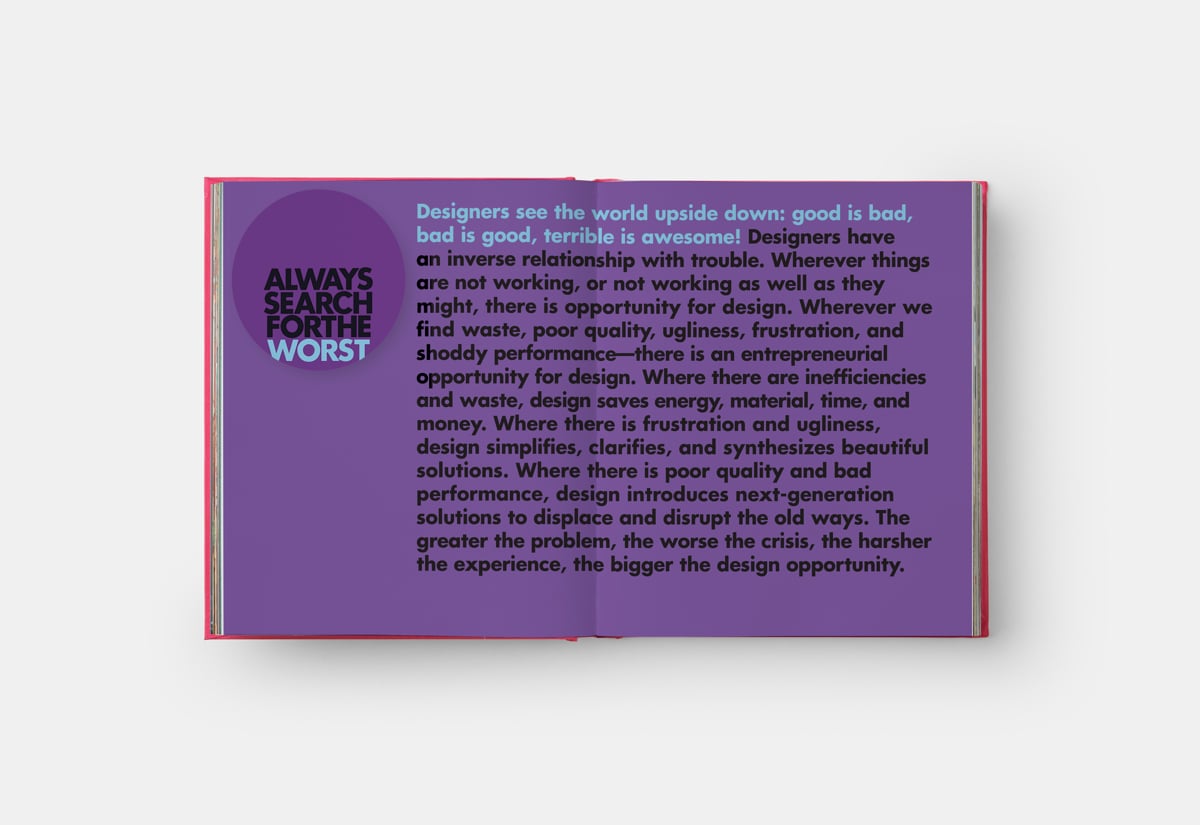 Arriving at an unprecedented moment, the Massive Change founder’s latest offering presents 24 principles for transforming your life, work and world.

It is the worst of times. Bruce Mau’s latest book, MC24 (Phaidon), arrives in the midst of a ravaging global pandemic and an anti-racist movement inspired by the death of George Floyd that has continued for two months now, as the American government has responded by deploying federal agents to violently clash with protesters in some cities. In 2020, the year of an impending U.S. election, the most innocuous and simple life-saving and democracy-upholding solutions – wearing a face mask and voting by mail – are political lightning rods that daily threaten to divide the country.

But could it also be the best of times for designers? One of the 24 principles of Massive Change – the name of Mau’s design network and the M and C of the tome’s title – is “Always Search For the Worst.” As Mau writes, “The greater the problem, the worse the crisis, the harsher the experience, the bigger the design opportunity.” He states that practically everything we need to do has to change. And he believes it can.

Mau is a self-described radical optimist. And his two dozen principles ­– each a major mind-set challenge, like “Design Your Own Economy,” accompanied by a discussion on the seemingly impossible realities inherent in such a task and examples of people who have risen to it – attest to his unwavering commitment. Mau has long been a champion of expanding design’s perceived role: He sees doctors and entrepreneurs as designers, whether they define themselves that way or not, when they use innovative thinking and tools to create new, better outcomes. As he told me in a recent interview: “My definition of design is the ability to envision a future and systematically execute the vision.” His book thoughtfully gathers examples of this creative determination, from the novel economic model that Aravind Eye Care System in India instituted in order to treat an overwhelming cohort of poor patients to the empathetic observations that led to inventor Dean Kamen’s stair-climbing wheelchair.

MC24 is the first book that Mau has authored since Massive Change (2004), a companion to the globetrotting blockbuster exhibition, produced with students at the Institute without Boundaries, a program Mau founded at George Brown College in Toronto. The ongoing Massive Change project, which began in the early 2000s and is still active today, catapulted the idea of design’s central role in solving the world’s most challenging problems. It was also transformative for Mau. Prior to it, he had been a highly renowned Toronto-based graphic designer. His creative direction for Zone Books and his collaboration with Rem Koolhaas – on S,M,L,XL, which rewrote the rules on monographs – broke the mould; and his stream-of-consciousness rumination on his own brand’s work, the free-wheeling and often-poetic Lifestyle, also endures as an icon. But Massive Change cemented his reputation as a preeminent thought leader and change maker, a conceptual guru who saw design, or its opposite, design failure, at the heart of everything, from single products to complex infrastructural systems.

Today, Mau is based in Chicago, where he runs the Massive Change Network and serves as Chief Design Officer at Freeman. Over his 30-plus-year career, he has collaborated with megabrands like Coca Cola, on the sustainability platform that involved upcycling PET bottles into Emeco chairs; nations like Denmark and Guatemala, on their legacy-proud but future-oriented branding; and star architects like Frank Gehry, on numerous projects including Panama’s Biomuseo, where Mau designed the mandate and the program, which exemplify the MC principle “We Are Not Separate From or Above Nature.”

The stories of these partnerships are found throughout MC24. Story-telling is, of course, an effective way to unpack process, the motivations inherent in it, and the domino effect of decisions and prototypes made over time in the pursuit of a final result. And Mau is just as enthralled by the journey as the destination. In one of the biographical vignettes he includes, he recalls the experience of getting lost in the woods surrounding his farmhouse in Northern Ontario as a kid in order to explain how, when you’re grasping for clues to your own survival, every detail comes into sharp focus. This terror of the unknown, which recurred for him much later in life, when he and his team were trying to puzzle their way through the Massive Change exhibition, is what designers routinely face if they are doing their jobs right. And he has a principle for that: “Think Like You Are Lost in the Forest.”

Read as a manual for a designer-entrepreneur-thinker-policy-changer, MC24 offers insight for tasks both big and small. A simple exhortation to “Sketch: Hey Everybody Let’s Fail” reminds us that there’s no wrong way to draw, and that unmooring ourselves from our insecurities around our inadequate pencil-wielding skills opens up to us an endlessly agile method of working out ideas. “Compete With Beauty” is a much bigger challenge and argument. Mau advocates for the power of beauty and writes a rhapsodic tribute to his friend, the war photographer Paolo Pellegrin, who still finds beauty in human beings, even after he has seen the worst of humanity. Then there’s the macro-scaled “Design for the Power Double Double.” In the doubling of the earth’s population (which over the past half century has gone from four billion to approaching eight billion), Mau views an opportunity where others might see impending disaster, for the Earth and already-strained regions and societies. The inevitable doubling of humans, he explains, will result in the doubling of ingenuity to address those same social and environmental concerns. This is predicated, of course, on redesigning our education systems to better nurture the latent potential of people around the world.

His book is full of bold, big-hearted vision of this kind. And it’s all good. There’s never been a better time for bringing down the house and building something better in its place. Maybe I’m biased: I worked with Bruce Mau on an exhibition, Prosperity for All, for the 2017 EDIT Festival. But I’m also a skeptic: I’m deeply allergic to the so-called powers of positive thinking. Mau’s book isn’t about that – it’s not about positive thinking, it’s about shifting mind sets towards “fact-based optimism” as a first step towards understanding and approaching the world’s “wickedest” problems. It can be read from the point of view of what an individual can achieve in business, or of what a group of people (Mau champions the shift from Renaissance Person to Renaissance Teams) can bring about on the world scale. In iterating the hidden process behind how he works, and how a number of the people he profoundly admires work ­– and building on the cult-status Incomplete Manifesto for Growth (1998), his earlier attempt at foregrounding the themes that influence his creativity – Mau has laid out the ultimate how-to. I read the book sequentially, but its self-supporting chapters can be referenced individually, again and again.

And maybe, in this moment where time feels as if it’s standing still while people are literally fighting in the streets against the inertia of oppressive, violent, outdated institutions, you will want to – and need to. In balancing his optimistic outlook with real-world examples of transformation, Bruce Mau has offered up a solution to the worst of times – a radically optimistic set of lessons for how we can push ourselves to think differently, and beyond this present moment.

Arriving at an unprecedented moment, the Massive Change founder’s latest offering presents 24 principles for transforming your life, work and world.