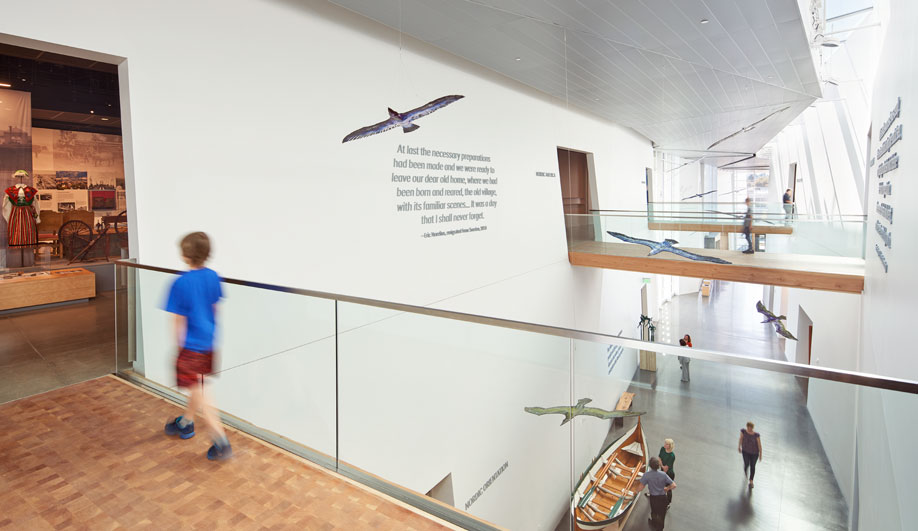 Seattle celebrates its nordic heritage with a striking new museum by Mithun.

By the early 1900s, approximately one-third of Seattle’s foreign-born population hailed from Nordic nations. These immigrants had made fresh starts in the Pacific Northwest, a land of familiar bountiful forests and rugged coastlines. Now local firm Mithun has crafted a bold and modern vessel for Seattle’s museum of Nordic history, organizing the structure’s double-height main hall to resemble a long, narrow fjord.

Founded in 1980 in a red brick former schoolhouse, the Nordic Museum organized a competition in 2007 to design its new home in the historic Ballard district. Mithun, partnering with the Finnish architect Juhani Pallasmaa, won the commission. “Our entry was the very first thing I touched upon joining the firm,” says project architect Dustann Jones. “And then the economy drove off a cliff.” 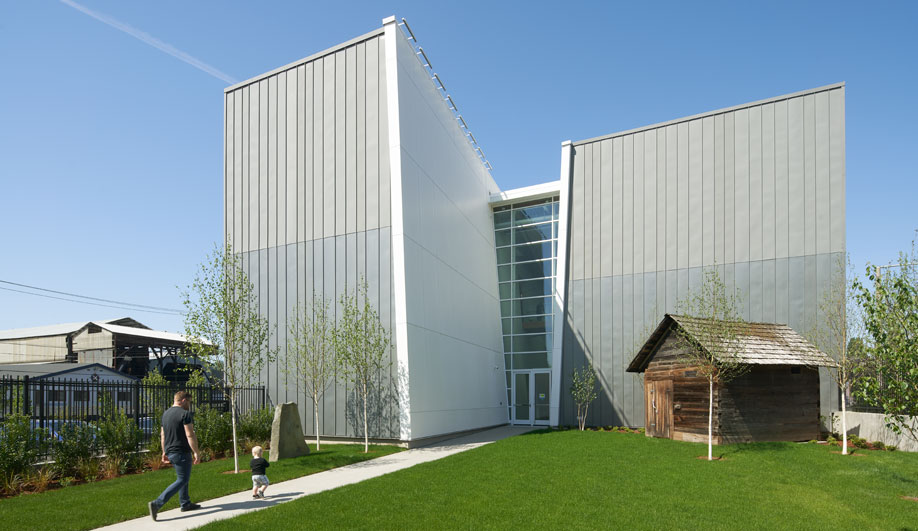 The main hall is clad in a monolithic zinc standing seam skin.

The resulting delays ultimately worked in Mithun’s favour when the Nordic Museum was able to expand its site after purchasing the linear block’s west end in 2012. “Our second go at it was able to breathe more,” says Jones, who worked alongside design partner Richard Franko. “We stretched it out, shifting the entry from east to west, and the fjord form became more like a slot canyon.”

Approaching from the east, a visitor to the Nordic Museum can spot dry docks along the Ballard Locks shipping canal. The museum’s two-tone grey zinc cladding (chosen to resist corrosion from Puget Sound’s sea air) plays off a lush archipelago of larch- and lingonberry-filled planting beds that run the length of Market Street. 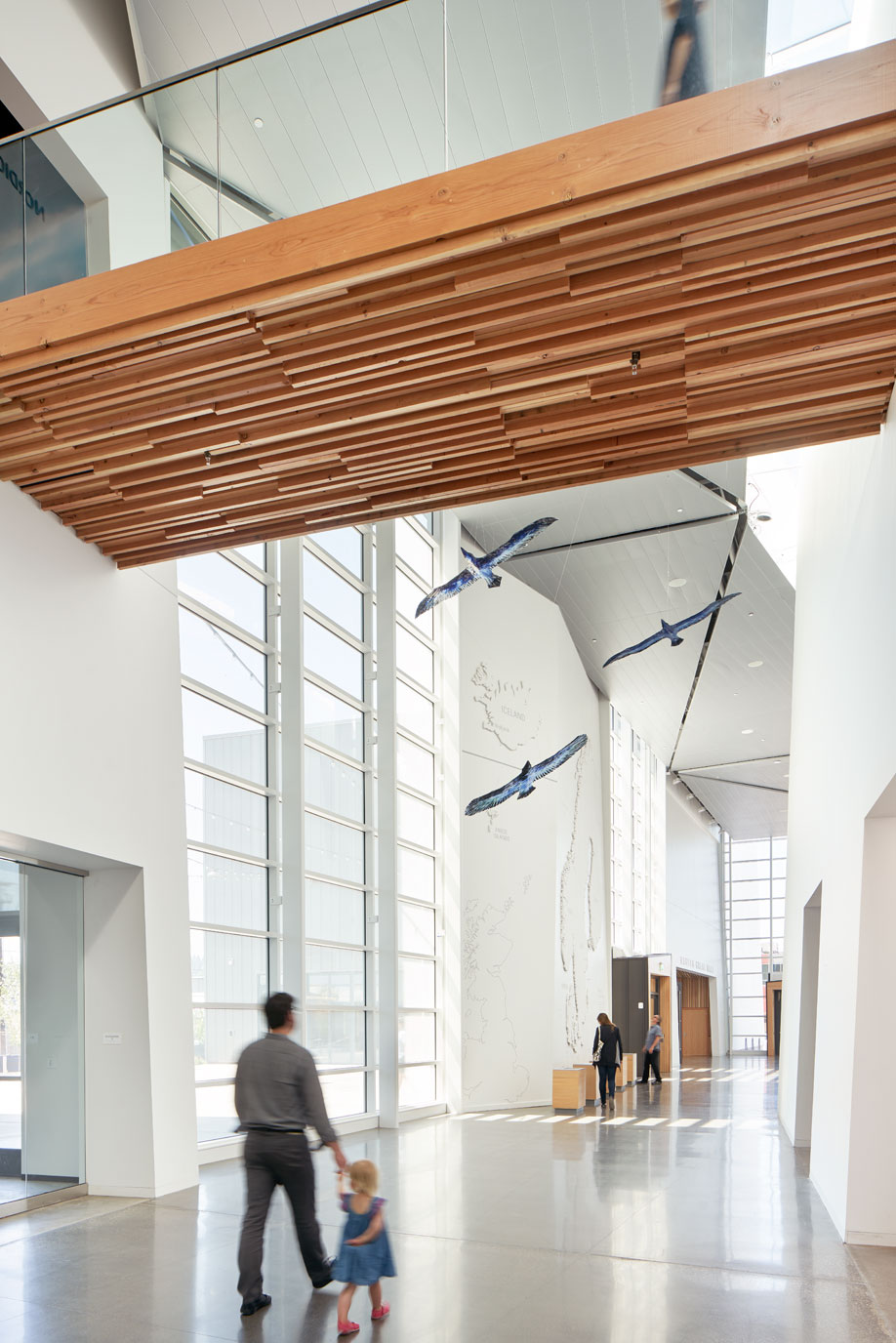 Seattle’s Nordic Museum is sculpted to evoke the similar geographies of the Pacific Northwest and Nordic regions.

When patrons enter the museum, their eyes are drawn down the length of a long, double-height space whose canted white walls rise to an undulating ceiling that’s striped along one edge by a 100-metre-long sliver of skylight. “The original design was more of a straight shot,” says Jones. “We ended up having it wiggle a bit more so that we didn’t just give up the entire view from the front door.” 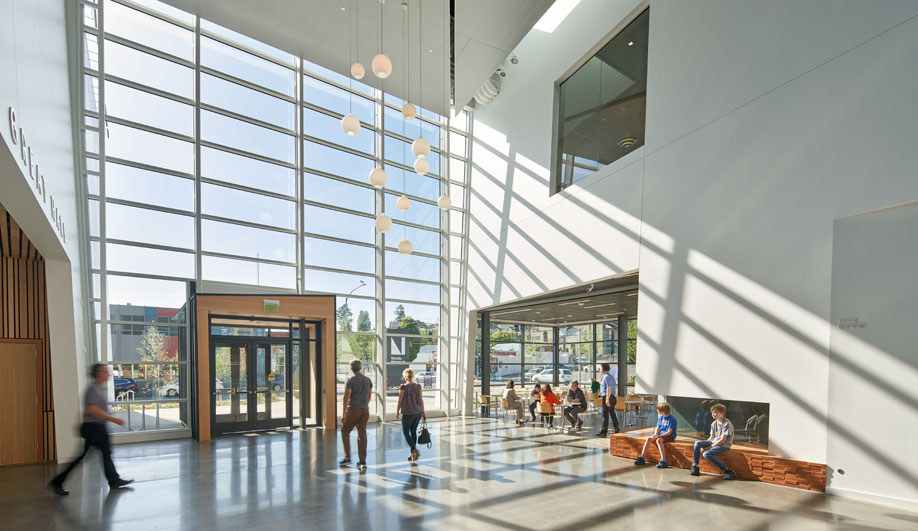 Inside, the permanent galleries are joined by wooden bridges that span a light-filled atrium.

That sense of movement and discovery entices visitors deeper into the haunting chasm of the fjord, linked on either side to gallery spaces for temporary exhibitions, which thus far have included colourful works by contemporary Norwegian artist Bjarne Melgaard, a landscape photo series by Olafur Eliasson, and Viking artifacts from Sweden. A narrowing wooden stair at the far end reveals light at its top – from a skylight and Wohlert pendant fixtures from Louis Poulsen – drawing visitors upward. The second-floor galleries, one of which is dotted by a “forest” of birch trees, are accessed by moving from one side of the fjord to the other via four bridges made from nail-laminated Douglas fir and covered in end-grain flooring. 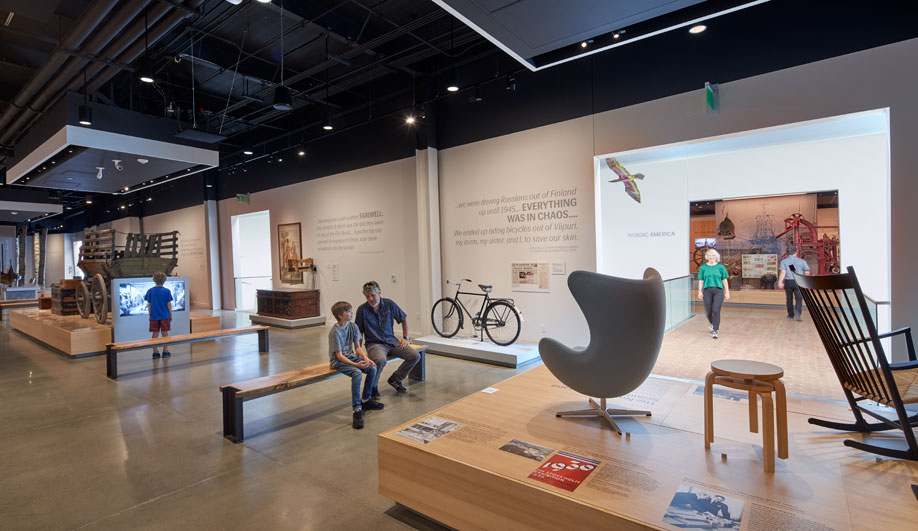 The result of Mithun’s design is a bold form perfectly fitted to the Nordic roots of the surrounding neighbourhood. “A fjord is this geological phenomenon that’s been eroded by glaciers over time,” says Jones. “We tried to sculpt a museum space that felt equally timeless.”