Quebec’s Quietly Stunning Musée National des Beaux-Arts
OMA New York lands in Quebec City with a stunning museum that is anything but starchitecture. 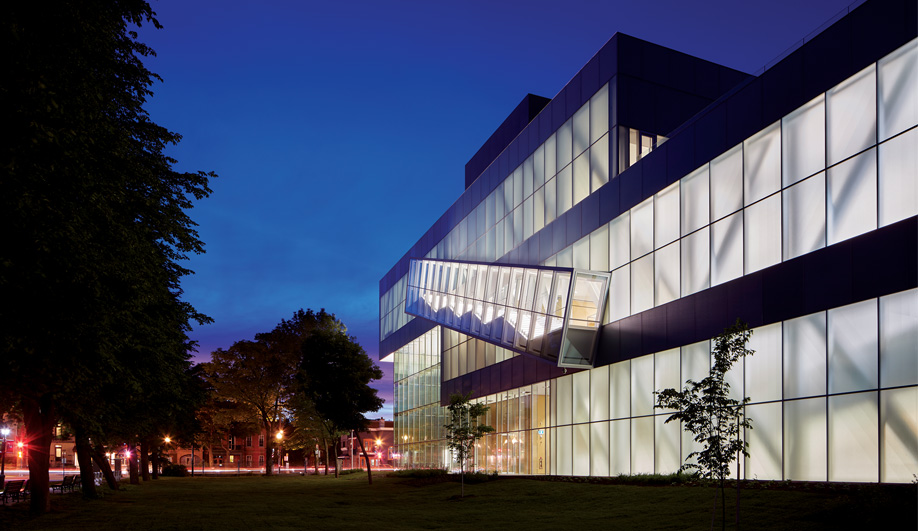 The top volume is 20 metres closer to the street than the ground-floor volume is, creating a cantilever over a glassed-in lobby and open plaza.

OMA New York lands in Quebec City with a stunning museum that is anything but starchitecture.

Shohei Shigematsu, director of OMA New York, has a hit on his hands. He is the lead architect of the new Pierre Lassonde Pavilion at the Musée national des beaux-arts du Québec, or MNBAQ, designed in collaboration with Montreal firm Provencher Roy. The competition-winning project was meant to be an icon, in the illustrious tradition of buildings devised in OMA’s Rotterdam head office, run by Rem Koolhaas. Instead, it is winning praise for its elegance and modesty. Shigematsu has found a way to build on the DNA of OMA while steering away from unnecessarily flamboyant gestures.

He sums up the building with a simple diagram of three stacked and staggered boxes. This lifts up the side of the museum that faces the city to create a broad cantilever, an OMA trademark, which floats 12.6 metres above a lobby enclosed by a glass curtain wall on three sides. At the opposite end of the building, planted terraces are meant to give the impression that the neighbouring park is climbing over the structure. A new 130-metre subterranean passageway connects the Pavilion to the rest of the museum complex,
a cluster of three buildings that range in style from stately Beaux-Arts to dynamic modernism. 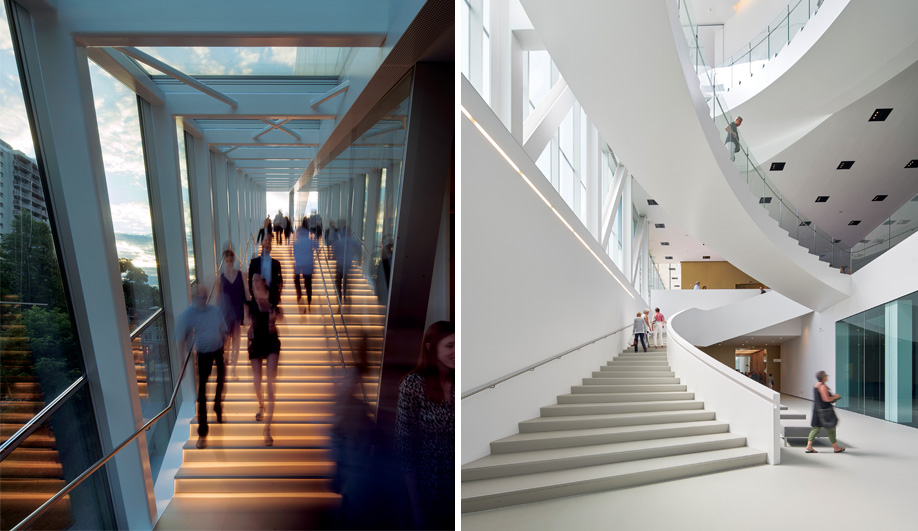 Left: A glass stairwell protrudes from the side of the building, letting the eyes of gallery goers wander outside, toward the surrounding park. Right: The boldest gestures are found inside, where the main stairwell circles an atrium that leads visitors to the upper levels.

While the outside is a simple glass container, the inside is a visitor-oriented showcase for the museum’s idiosyncratic collection of Quebecois art made since 1960. Since parking is at the other end of the complex, most visitors will arrive through the passageway, which in turn leads up to the lobby and the second floor via a curving, crowd-pleasing staircase. To get to the third floor, visitors take another glass-and-steel stair that pops outside the main volume at the height of the nearby trees.

At 14,900 square metres, the Pavilion doubles the museum’s exhibition space. There are two revolving galleries on the main floor, a permanent gallery on the second, and galleries for Inuit art and design and decorative art on the top. Pride of place goes to painter Jean-Paul Riopelle’s 40-metre-long Tribute to Rosa Luxemburg, which OMA installed in its entirety in the basement passage. There’s also plenty of flexible space equipped for educational activities, art workshops, receptions and exhibitions.

When the Pavilion opened on St-Jean-Baptiste Day, on June 24, its worth as a genial addition to Quebec City’s cultural scene was immediately evident. It may also point a way forward for OMA New York, out from under the shadow of the Rotterdam mothership. Shigematsu says that the successful connection of park and city has already helped his office win OMA’s first art museum commission in the U.S.: an addition to the Albright-Knox in Buffalo.