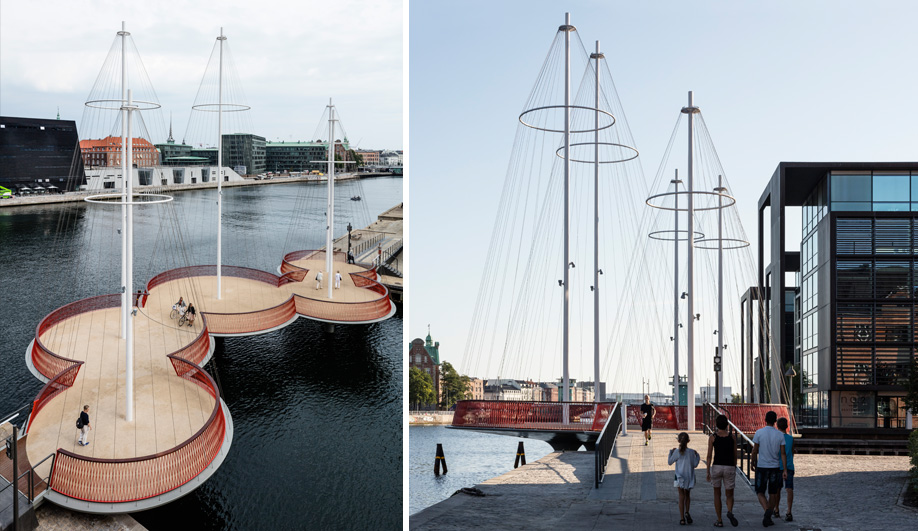 One section of the bridge rotates to allow large boats to pass through. Some 5,000 cyclists and pedestrians are expected to cross the bridge each day. 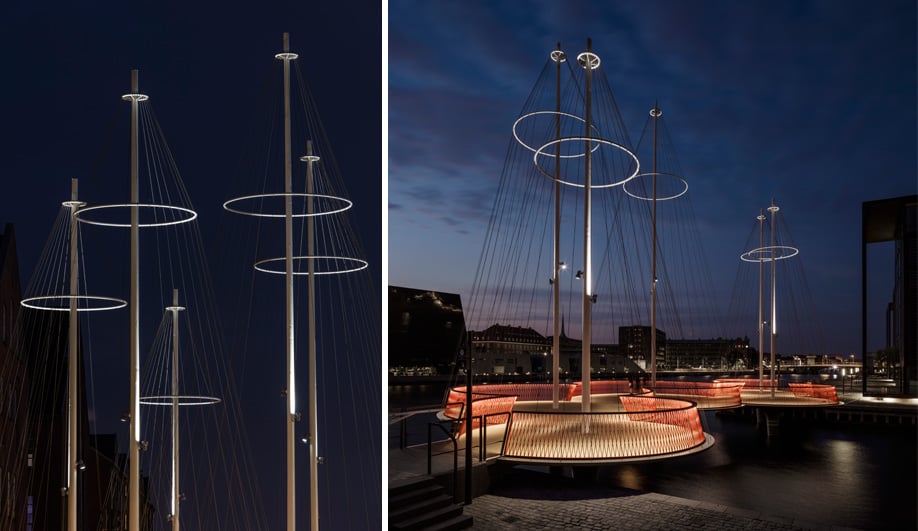 The Icelandic artist expands the Danish capital’s pedestrian circuit with his Circle Bridge.

Copenhageners take great pride in their city’s appearance, and in the quality of life it offers. And so they should. Some of the most iconic contemporary architecture in the world can be found there. Buildings and local monuments regularly show up as backdrops in such television series as The Bridge and The Killing. Cirkelbroen, or the circle bridge, is the city’s latest eye-catching public project to be realized, and it, too, is destined to become a dramatic tableau.

You couldn’t blame location scouts for the choice. Designed by artist Olafur Eliasson, the roughly 40‑metre-long structure is located in a picturesque part of the inner harbour that straddles Christianshavn Canal. It provides a new shortcut between Christiansbro and Applebys Plads, two residential areas that have been built up over the past decade or more.

The five circular platforms, supported by pylons, were inspired by Eliasson’s childhood in Iceland, where fishing boats moored alongside one another enabled people to cross a body of water by walking from one to the next.

The masts stand in for the towers of a suspension bridge, with cables helping to support the concrete platforms. Red-painted railings gird the decks, leaning inward at an angle that echoes the cables.

Open since August, Cirkelbroen is now part of a larger pedestrian circuit that will eventually wind all the way around Copenhagen Harbour. It also joins an A-list of architectural highlights along the route, including local firm Schmidt Hammer Lassen’s addition to the Danish Royal Library, Henning Larsen’s Opera House, and MVRDV’s Gemini Residence.

Says Eliasson, “I hope the zigzag will make pedestrians reduce their speed and take a break. I see this kind of introspection as an essential part of a vibrant city.” ­

SHARE
Twitter, Facebook, LinkedIn, Pinterest, Email
TAGS
Infrastructure, Urbanism,
AZURE is an independent magazine working to bring you the best in design, architecture and interiors. We rely on advertising revenue to support the creative content on our site. Please consider whitelisting our site in your settings, or pausing your adblocker while stopping by.