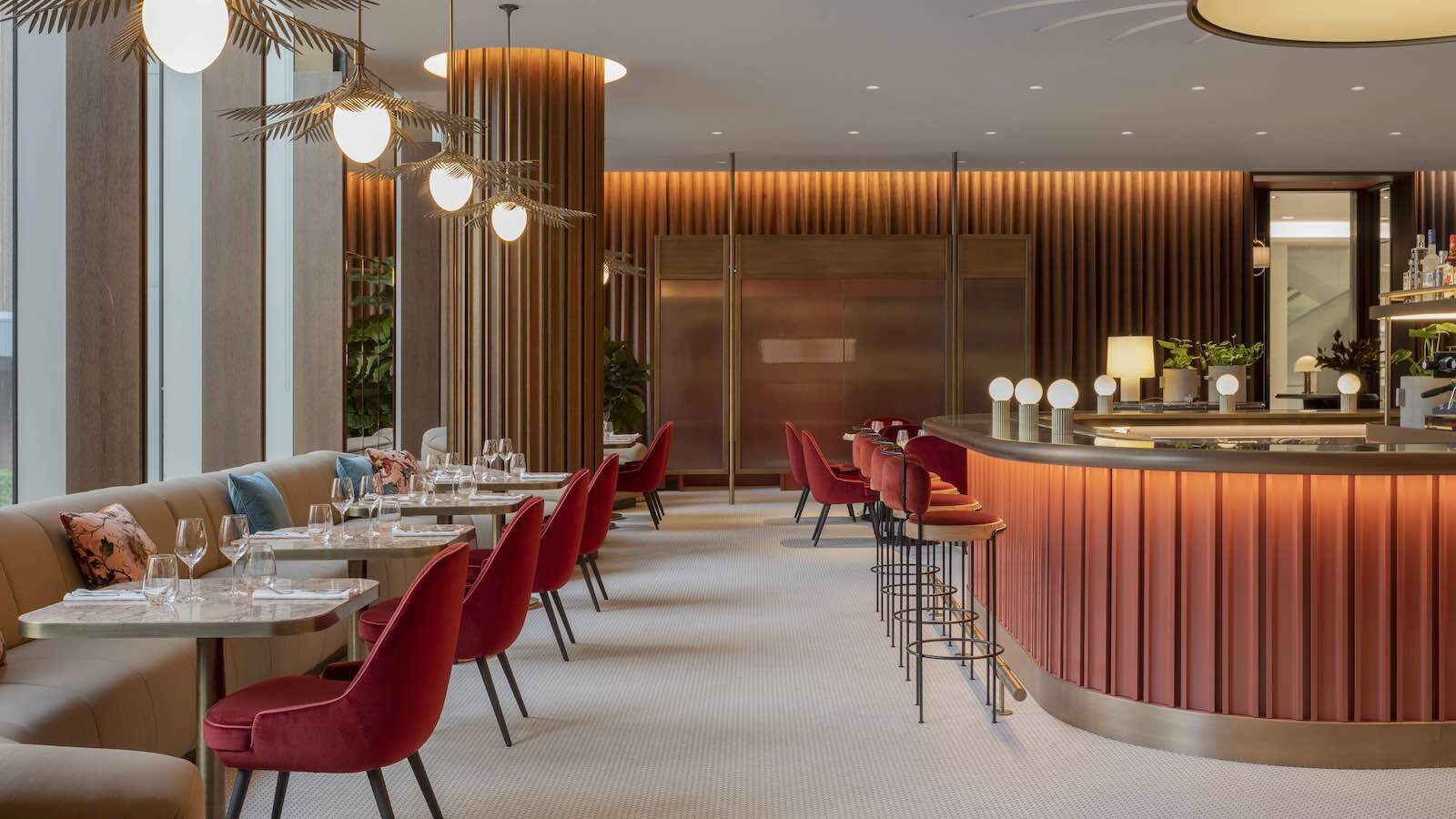 On the downtown Montreal corner of Mountain and Sainte-Catherine, the Romanesque Revival facade of the Maison Ogilvy department store has greeted visitors since 1912. Inside, things have changed. Over the course of a century, the storied retailer evolved from a dry goods business to an upscale fashion destination. And just last year, the historic “grande dame of Saint Catherine Street” entered another new chapter, re-opening under the Holt Renfrew banner following an extensive renovation. 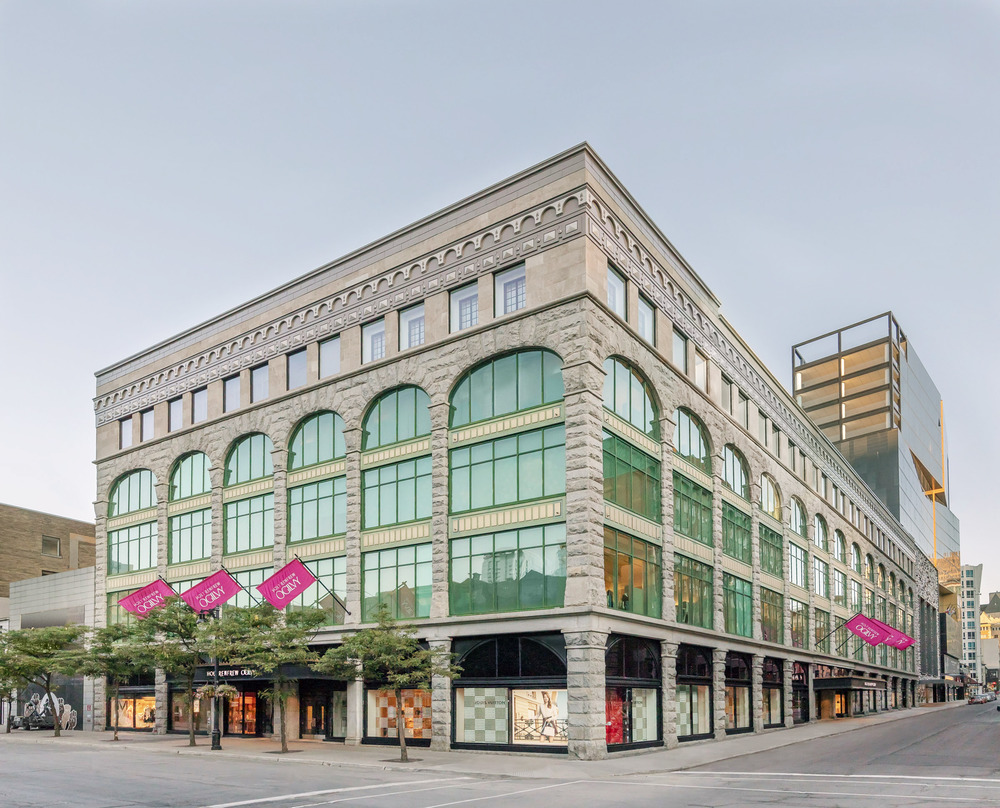 Led by local architects Lemay and New York-based interior designer Jeffrey Hutchison & Associates, the retrofit was undertaken as part of a larger full-block transformation that saw Montreal’s new Four Seasons Hotel — designed by Lemay with Sid Lee — rise immediately to the north. And while the taller building is now a beacon for the upscale neighbourhood, a reinvented retail experience awaits behind the restored 1912 frontage. 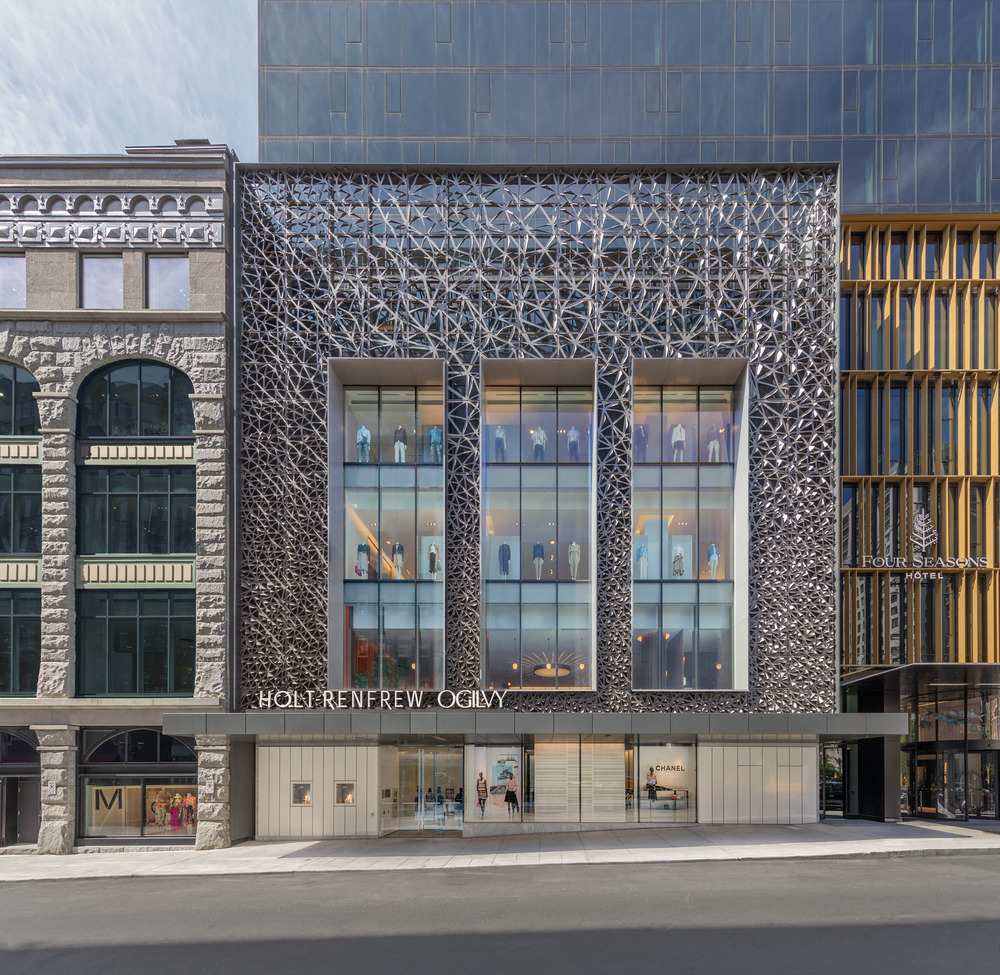 Bridging the hotel and the historic building, a showpiece facade treatment hints at the revitalized 23,000-square-metre space inside. On Mountain Street, a bold metallic vein pattern announces the new store. While the treatment is an assertive departure from its older neighbour, the scale and rhythm of the transparent facade maintains a dialogue with its Romanesque Revival neighbour, making for an eye-catching yet contextual addition. 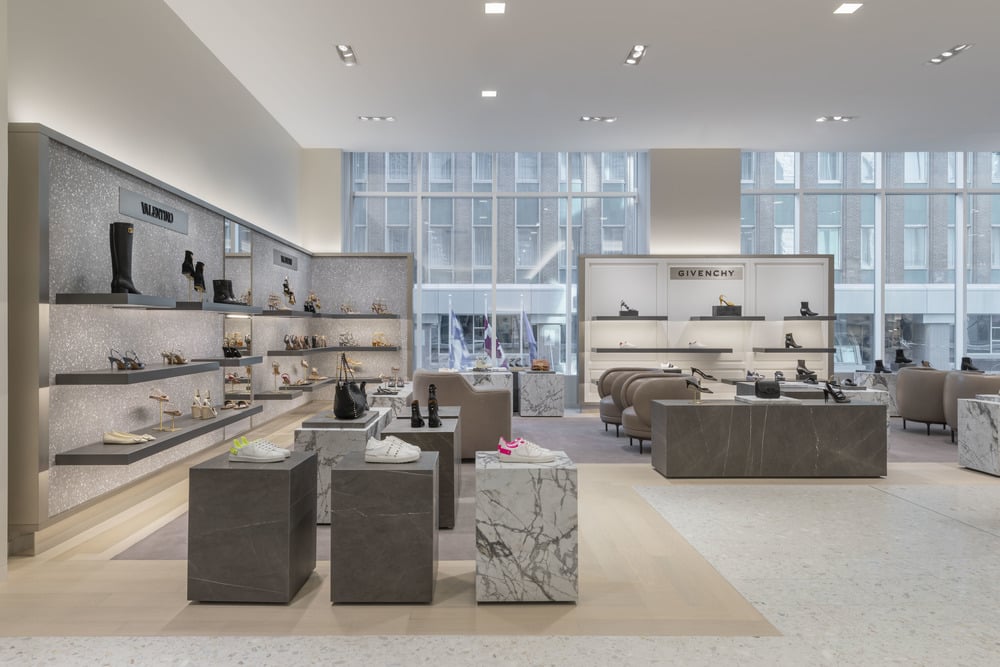 Now known as Holt Renfrew Ogilvy, the revamped six-storey flagship is defined by a “store-within-a-store” concept that incorporates numerous small boutiques into a unified space. The likes of Prada and Gucci are artfully represented in bespoke spaces, each with a motif that riffs on the brand’s broader design language. 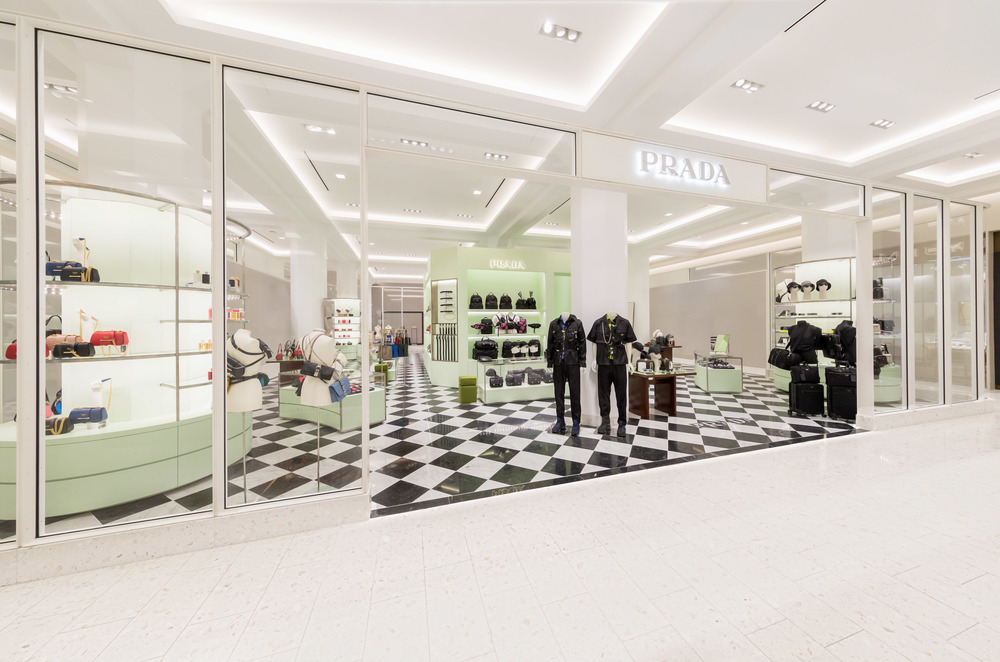 Prada is distinguished by a black and white floor pattern, while the same tile format — this time in a vivid interplay of green and yellow — accents Gucci’s plant-filled space, with the same tonal expressions also extending across select fixtures. 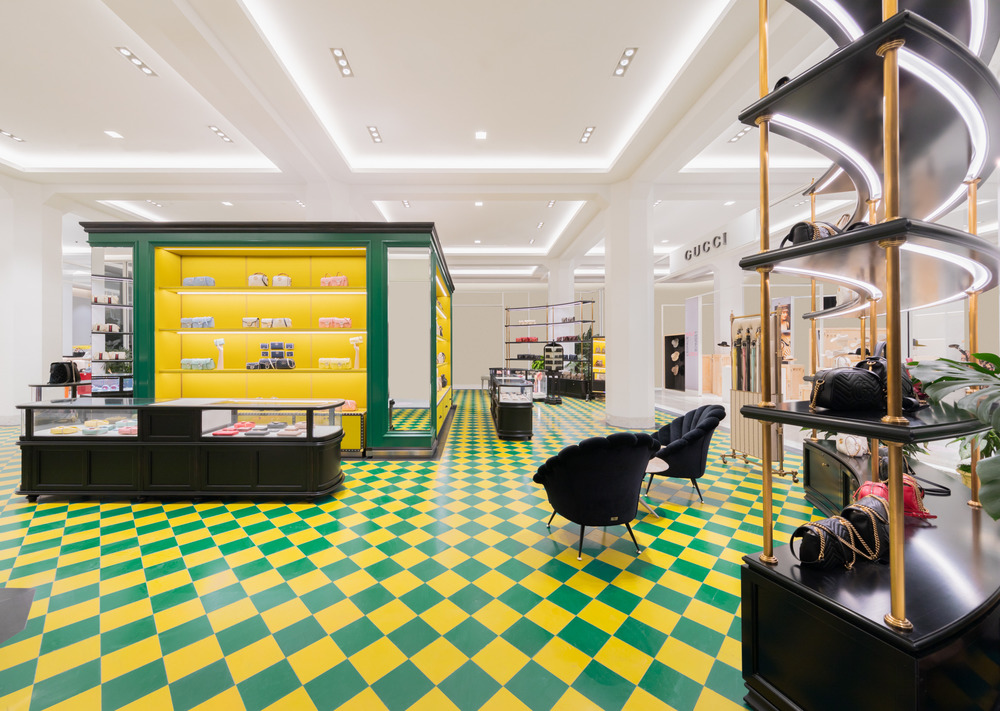 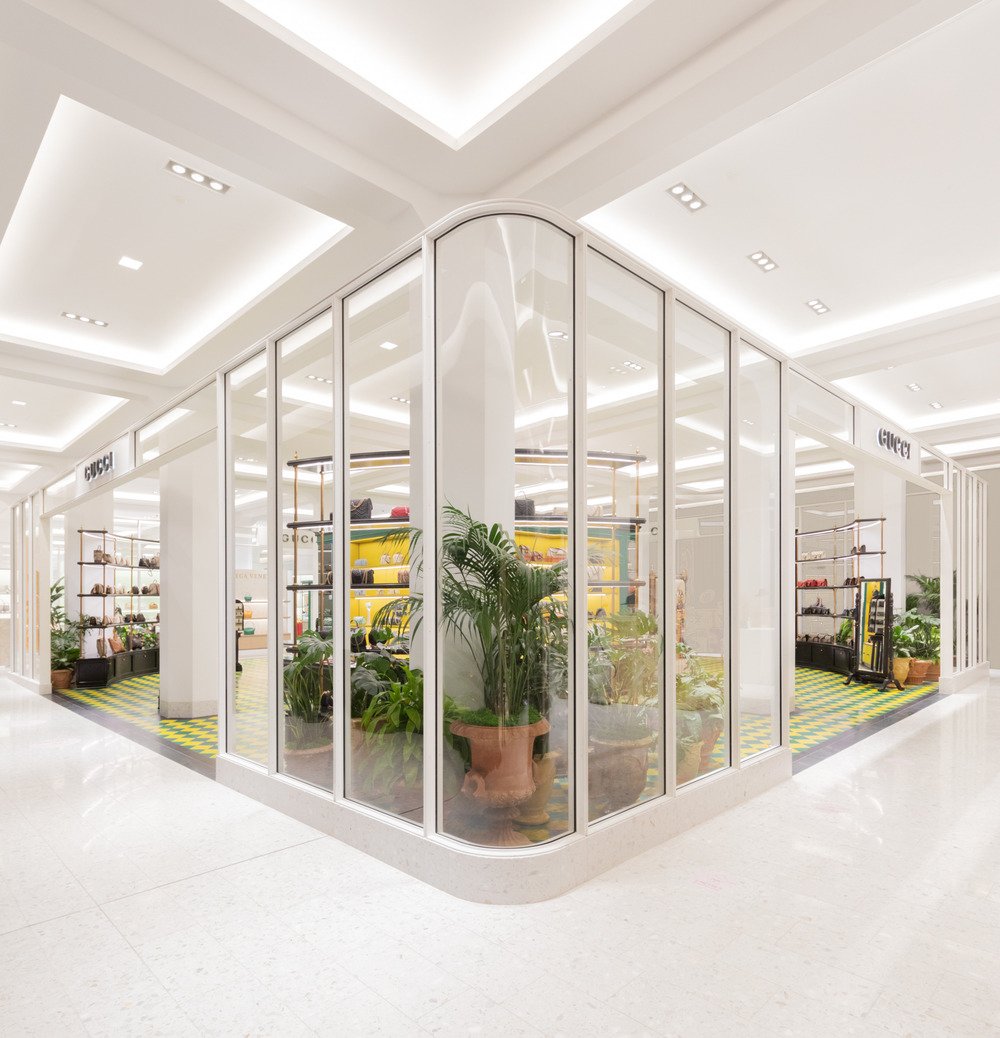 Emphasizing an experiential approach to retail, the store is kitted out with luxe private shopping areas, while the showpiece Café Holt — courtesy of Parisian designers Laplace — offers a respite overlooking the city. All warm tones, soft lights, lush carpets and gold accents, it’s a nod to 1940s glamour, and a promise of elegance in 21st century shopping. 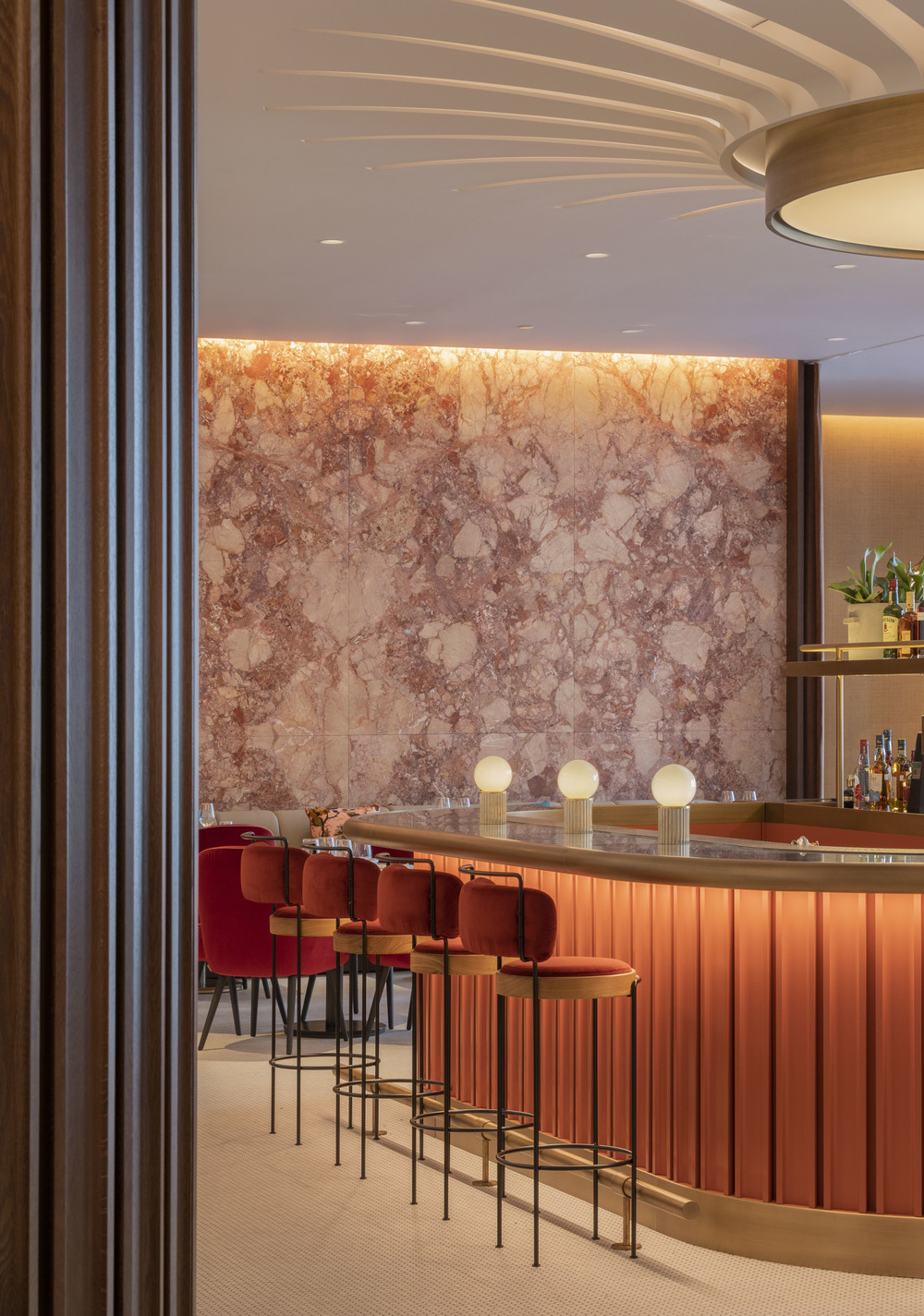