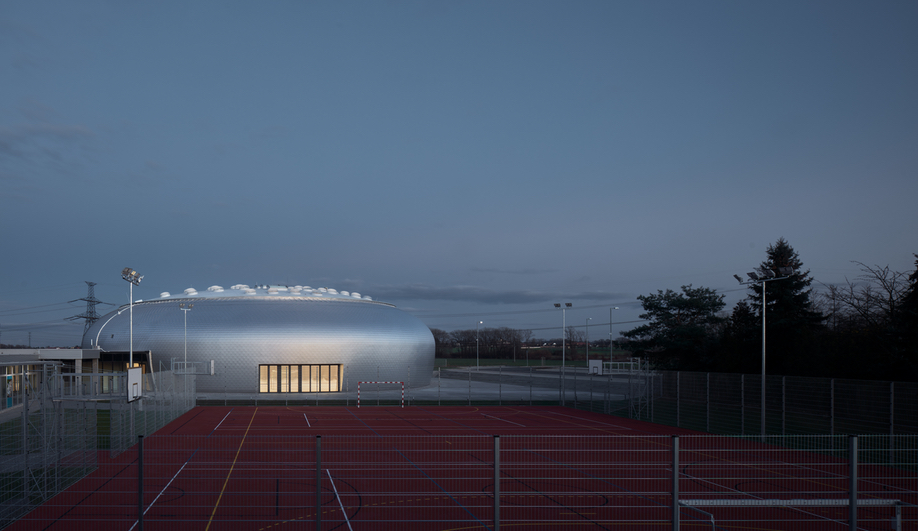 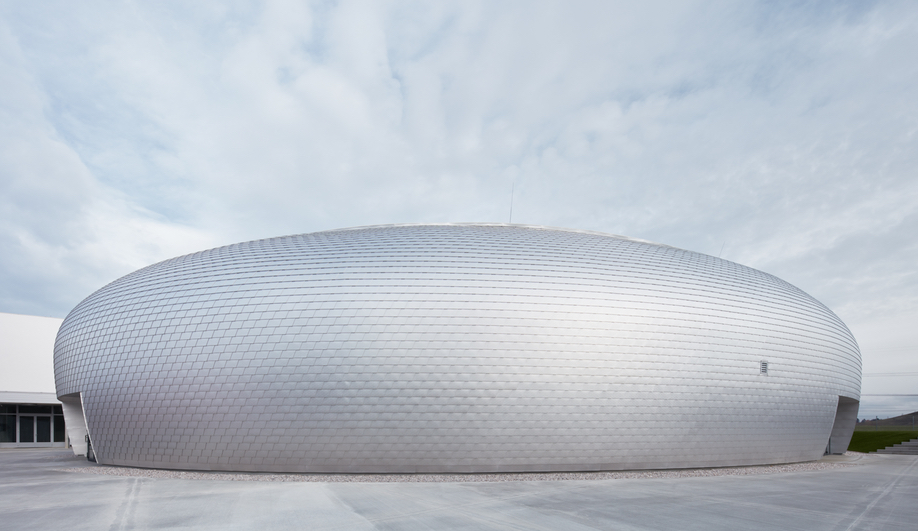 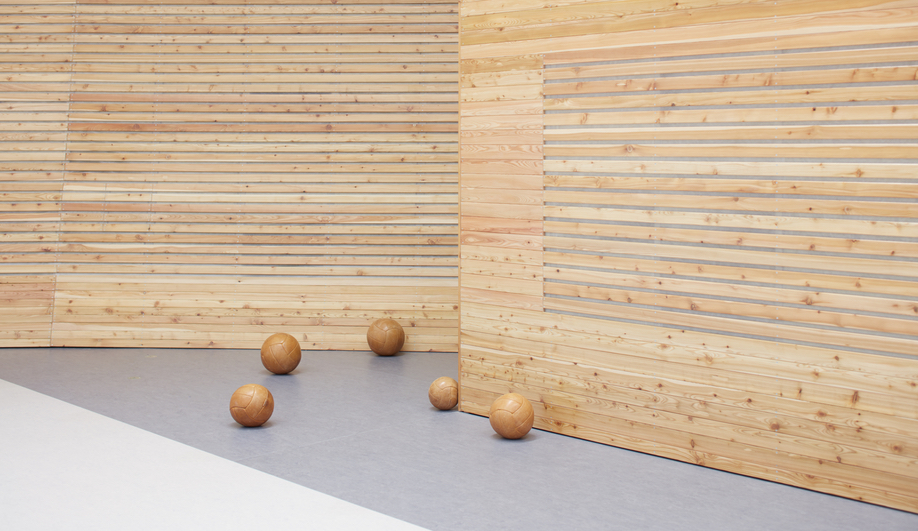 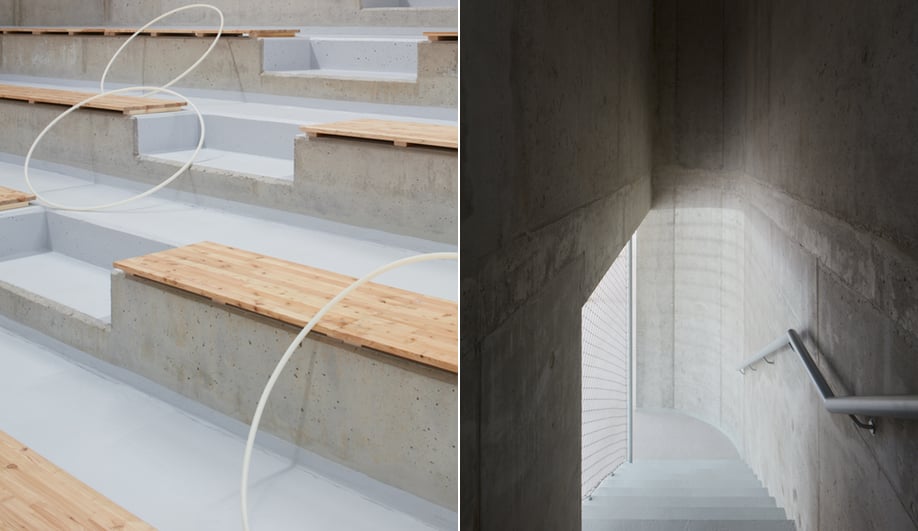 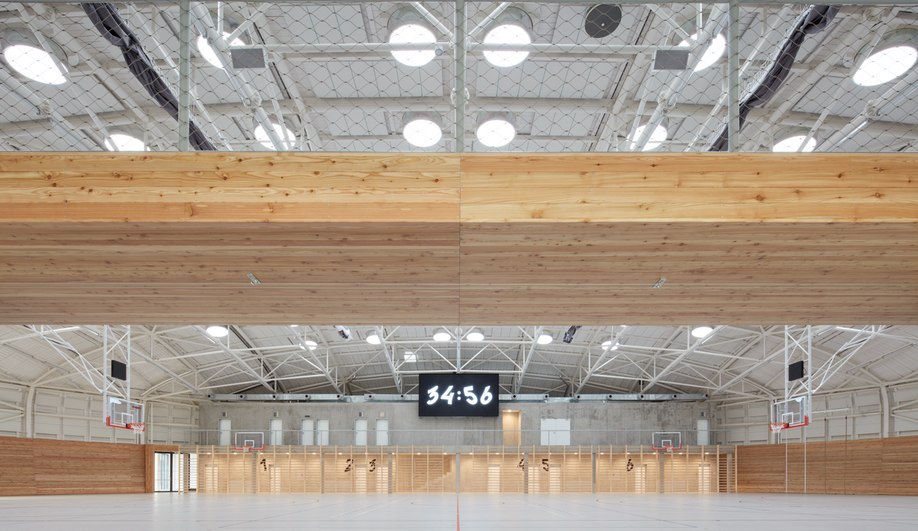 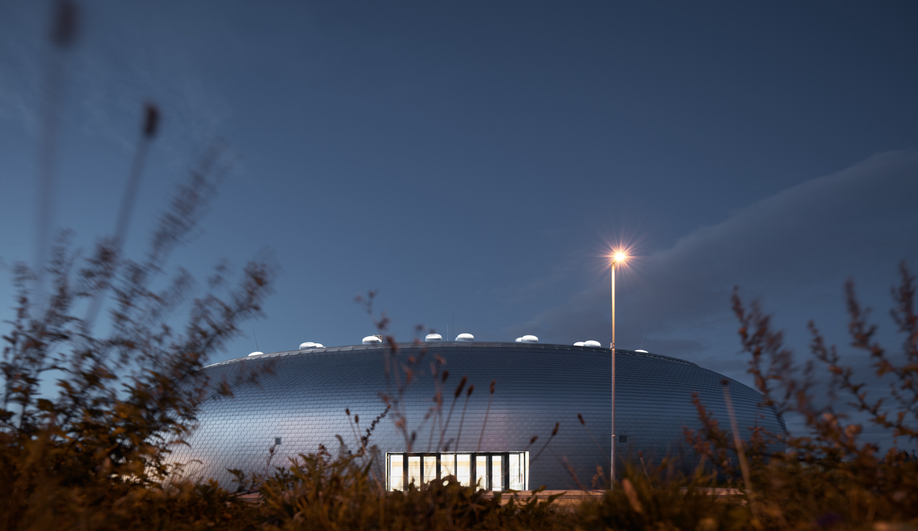 A scene befitting of Arrival has landed in Dolní Břežany, a municipality in the Prague West District. But Amy Adams isn’t trying to communicate with aliens in the Czech Republic. No, something more terrestrial, but no less fun, is happening: intramural sports.

The domed, seemingly scaly building in Dolní Břežany is actually a gymnasium and community space, designed by Czech architecture firm Sporadical. The firm says that the striking building – which it calls a “a spatial rotational ellipsoid form” – wasn’t simply built to provoke awe.

Rather, the Dolní Břežany Sports Hall is meant to integrate with its surroundings: reflective aluminum PREFA cladding mirrors the nearby greenery; a white roof blends the border between building and sky; and its domed form disguises the structure’s sprawling size, drawing “the scale closer to humans.” The roof is outfitted with light tubes, which give it a glowing appearance from afar.

A path connects the sports hall to the Břežany School, which serves primary-aged students, and beyond school hours, the building is also used as a recreation space, an amphitheatre and cultural centre. Flexible by design, the Dolní Břežany Sports Hall was created for “both current requirements and an unknown future.” That may sound ominous, but its surrounding land is in the process of being developed – and this structure could become the focal point of an emerging neighbourhood.

But back to the present. After entering the sports halls’ doors, visitors walk down a hallway flanked with windows – with views of the town on one side, its yet-developed land on the other – before reaching the centrepiece: a 45-by-25-metre multi-sport surface. Soaring arched walls proudly display the building’s load-bearing concrete bones.

Contrary to the building’s eye-catching exterior, the interiors of the Dolní Břežany Sports Hall are deliberately muted, pairing exposed timber with a white and grey palette. The sport surface can be separated into three equal parts using mobile blinds (below), which allow multiple phys-ed classes to run concurrently. When the blinds are drawn, it separates into parcels big enough to accommodate their own volleyball games.

After climbing a set of stairs, spectators arrive at a second-storey grandstand, which stretches around the building’s perimeter and is connected by a gangway (below). The grandstand offers views of the sports surface or the building’s vestibule.

From here, spectators can appreciate the attention to detail Sporadical placed on lighting and acoustics. The ceiling is outfitted with 68 Lightway Maximus tubes, which filter sunlight evenly during the day and, using an LED hybrid system, mimics natural light at night. The walls and ceiling are lined with Ecophon Super G acoustic panels, ensuring that voices – and whistles – have sufficient clarity. Now, play ball.