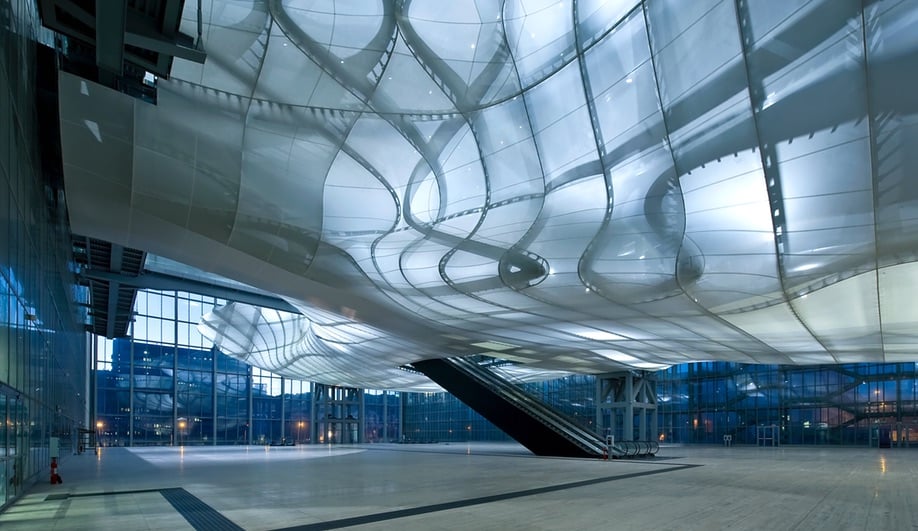 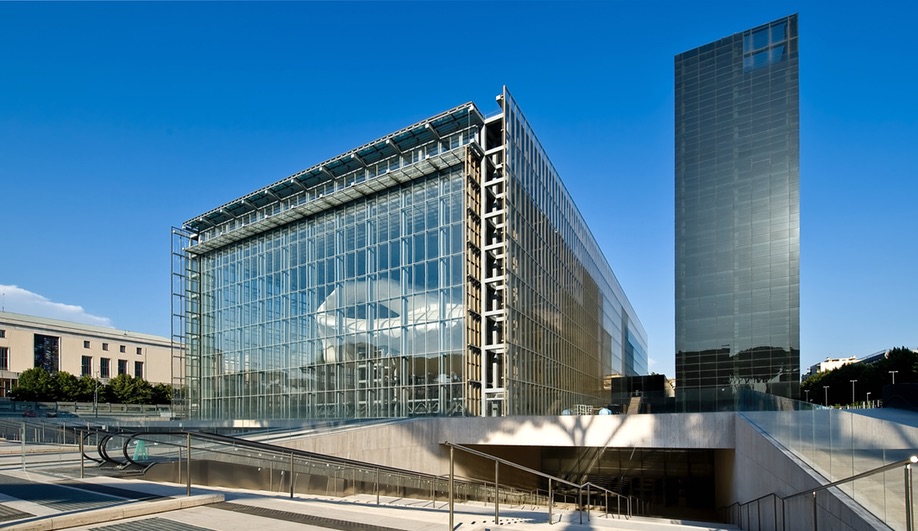 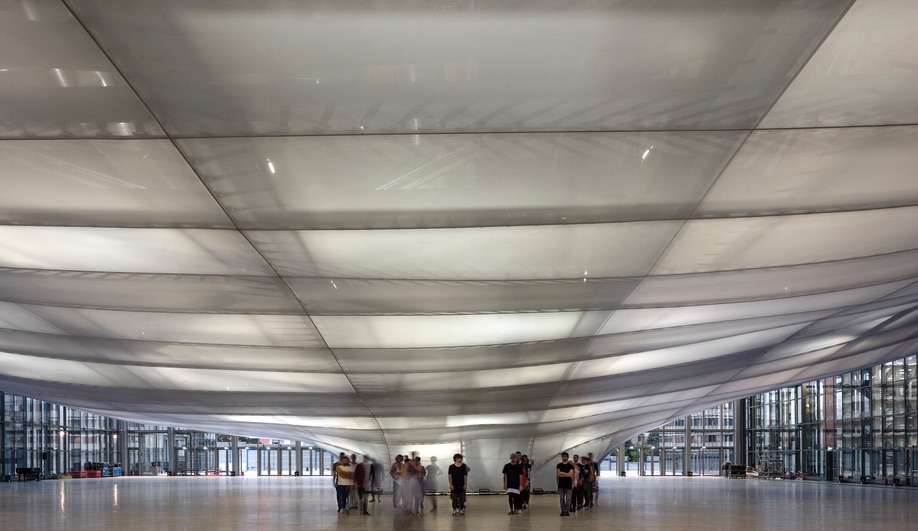 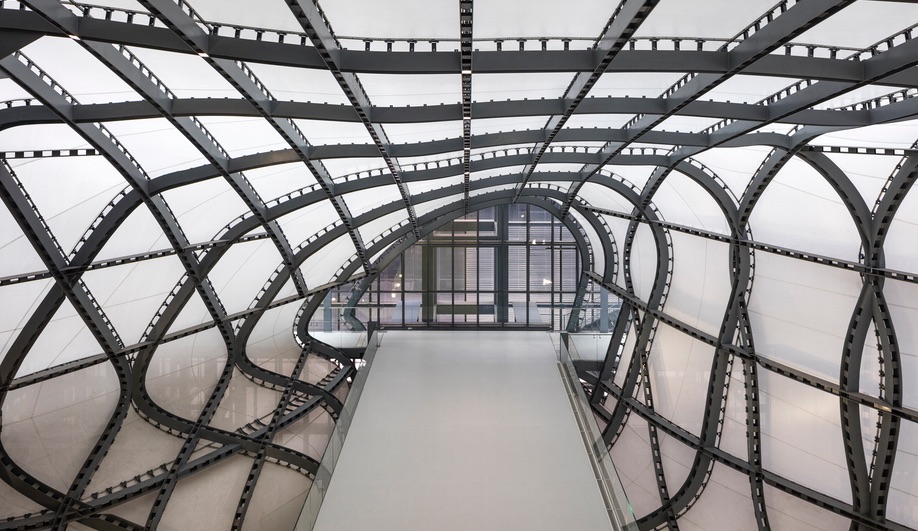 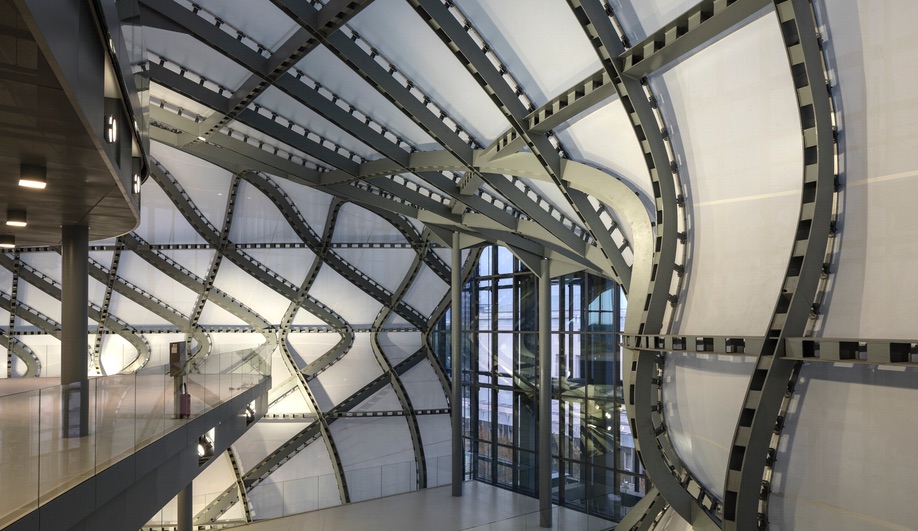 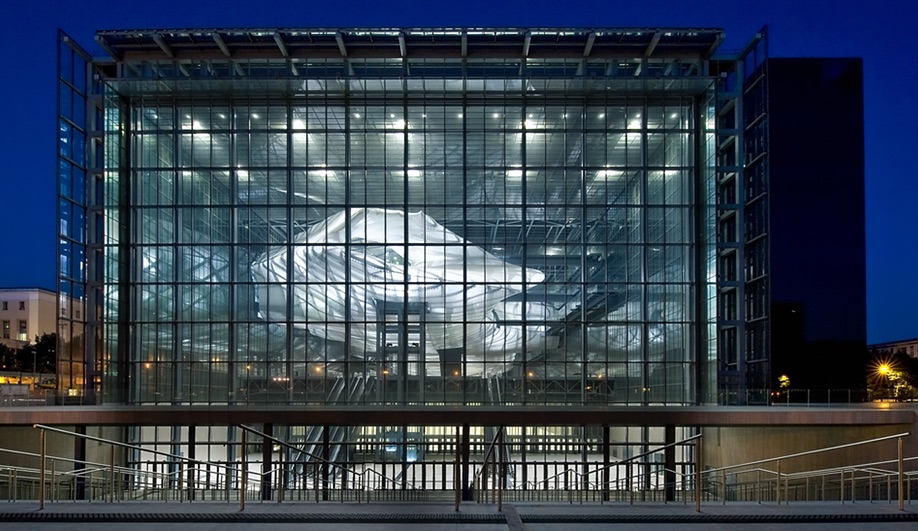 It’s been 18 years since Studio Fuksas presented their concept for a new convention centre – to be located in the heart of Rome’s bustling EUR business district – to the competition jury. Last week, the results were finally unveiled, officially marking the New Rome EUR Convention Hall as the largest building to rise in the city in more than 50 years.

From the exterior, the main structures – the convention hall and an adjacent hotel tower, which together comprise 55,000 square metres – are restrained and orthogonal, designed to blend in with the surrounding rationalist architecture; their south-central Rome neighbourhood of EUR, for Esposizione Universale Roma, rose in the 1930s in a plan to host a 1942 World Expo that never happened.

A wide plaza runs parallel to Viale Cristoforo Colombo – one of the main thoroughfares of Rome’s south end – with steps leading down to the broad glass facade of the main hall. From here, the length of the adjacent hotel is hidden; in fact, the hotel runs alongside the hall to the south, set back further from the roadway, for more than half the length of site. This long, narrow shape gives the freestanding structure its name: the Blade. Rising 17 storeys, the Blade’s 18,000 square metres comprise a 429-room hotel with seven boutique suites, as well as a spa and restaurant.

Inside the convention hall, the program is conceived as three interrelated components: the basement, the Theca and the Cloud. The basement is the visitors’ introduction to the space; accessed by the wide stairs that run the length of the plaza parallel to the road, the basement ushers crowds underground to the main foyer and reception point, and up to the main atrium and its exhibition halls. It’s here that Fuksas’ greater ambitions for the structure begin to emerge.

Above the basement stands the Theca, from the Latin word for box or case. The Theca makes up the rectangular outer shell and facade of the structure, constructed from metal, glass and reinforced concrete. Here 7,800 square metres of multi-use space will host conferences, exhibitions and other large-scale events. Fuksas designed the space with modular flexibility in mind, allowing sections to easily be partitioned off for large or small events. But the interior’s most prominent feature – suspended at points on all sides, and filling most of the Theca’s volume – is the Cloud, a massive, bulbous structure whose wavy, translucent contours contrast with the Theca’s industrial lines.

Suspended inside the Theca, the Cloud is the heart of the centre, symbolizing the centre’s position at the heart of the city. The focus point of the entire complex, the sculptural form of the Cloud is wrapped in 15,000 square metres of high-tech fibreglass and flame-retardant silicone membrane. The self-contained, cocoon-like structure is accessed via a wandering walkway that fuses it to the Theca.

Inside, the Cloud houses five levels, accessed by escalators and walkways, which converge on an 1,800-seat auditorium. Clad in sound-dampening cherry wood panels, the auditorium is furnished with red-upholstered Poltrona Frau seating and bespoke lighting by iGuzzini, both designed by Fuksas specifically for the project.

As visually stunning as the convention hall is, not all of its best features are visible. It may appear fragile, but the centre is carefully engineered to withstand earthquakes small and large. It’s also built with 21st-century sustainability in mind, including a rainwater harvesting system, and a high-performance reversible heat pump connected to a small lake located a few blocks away, for efficient air conditioning. And its roof is covered with PV panels that both shade the building to lower heat gain and offset its power consumption.

SHARE
Twitter, Facebook, LinkedIn, Pinterest, Email
TAGS
Commercial, Cultural,
AZURE is an independent magazine working to bring you the best in design, architecture and interiors. We rely on advertising revenue to support the creative content on our site. Please consider whitelisting our site in your settings, or pausing your adblocker while stopping by.