Work and Play at Google Dublin
Expanding on its fun-loving office culture, the online search engine and advertising giant opens a vibrant headquarters in Ireland. 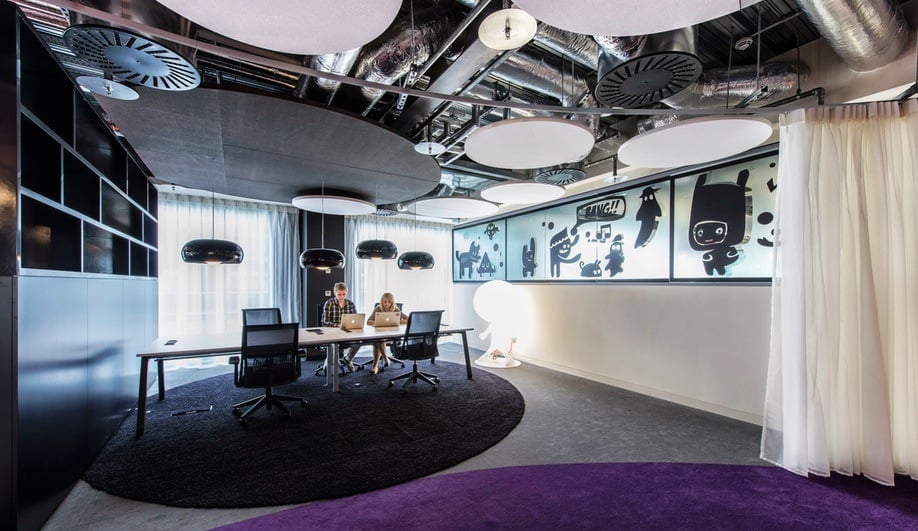 An anthropomorphic floor lamp by Slide Design adds a playful punch to this workspace. 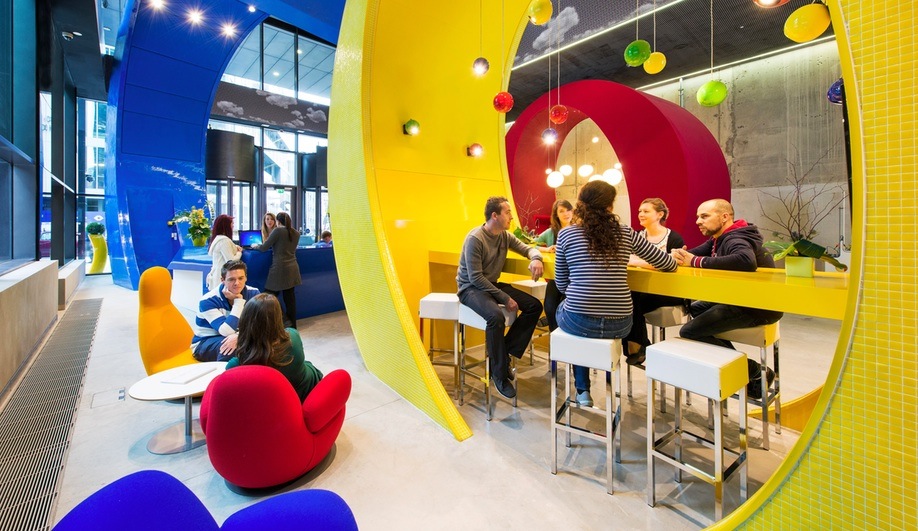 The lobby is outfitted with a large and colourful sculpture based on the Google logo. Surrounding it are upholstered chairs by Blå Station, coloured globe pendants by &Tradition and stools by Pedrali. 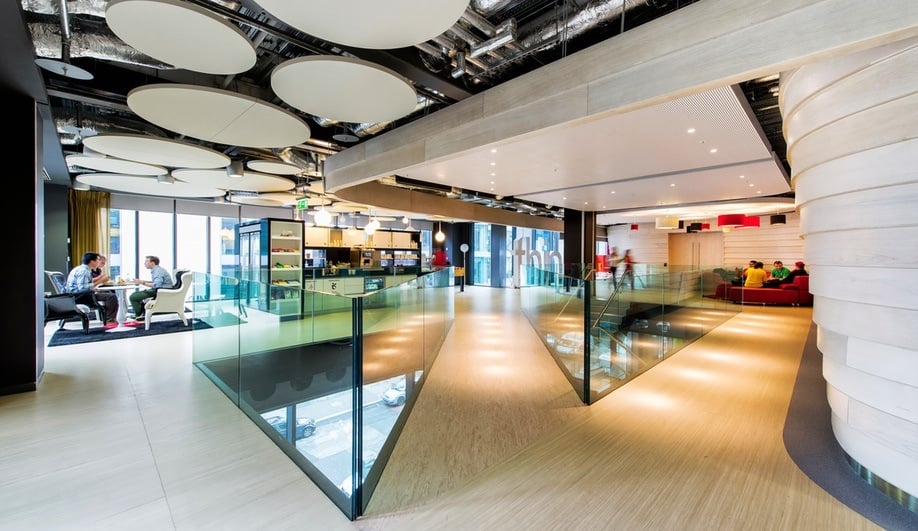 A bridge offering views into the lobby is finished with Tarkett’s engineered wood flooring. 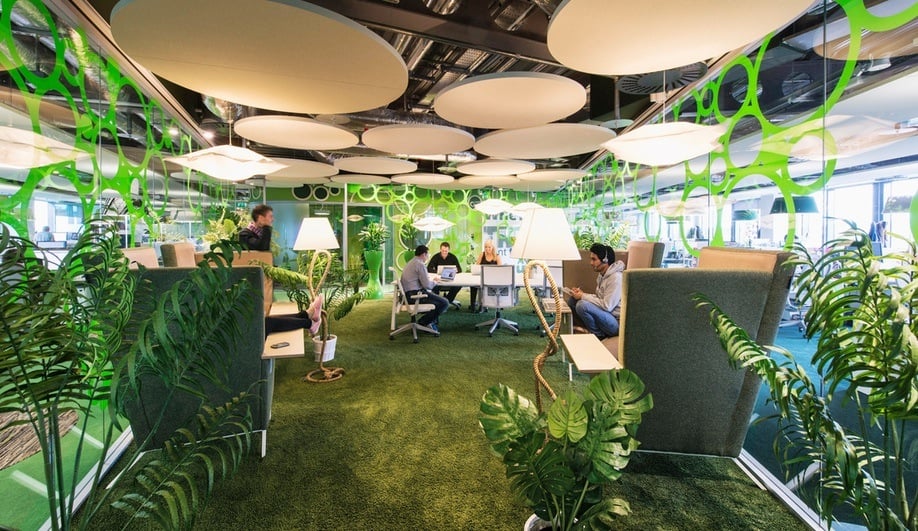 Paper pendants from Ikea contribute to the organic feel of this jungle-themed work space. 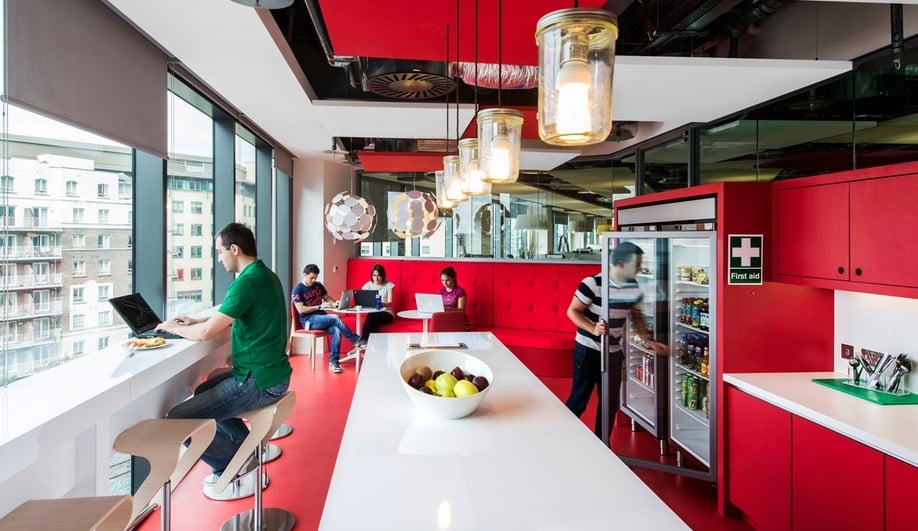 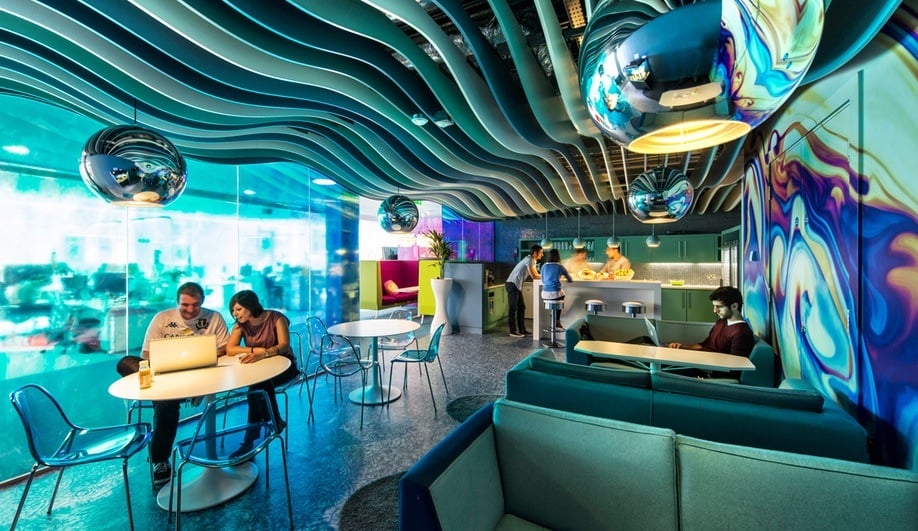 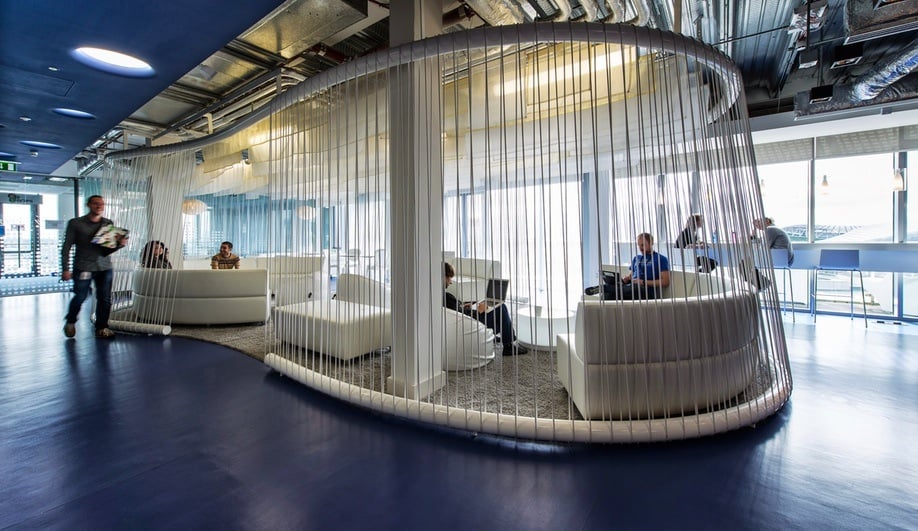 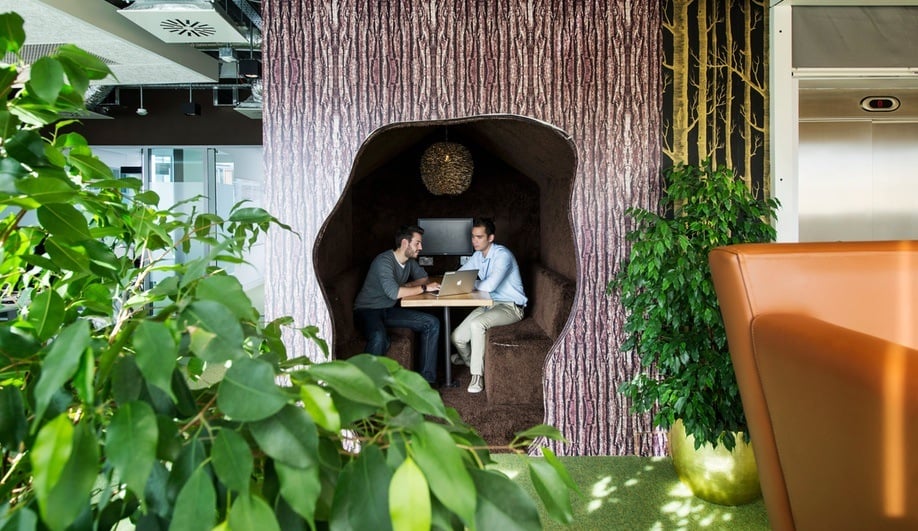 Small breakout areas, including this space modelled on a hollow tree, provide employees with opportunities for impromptu meetings. 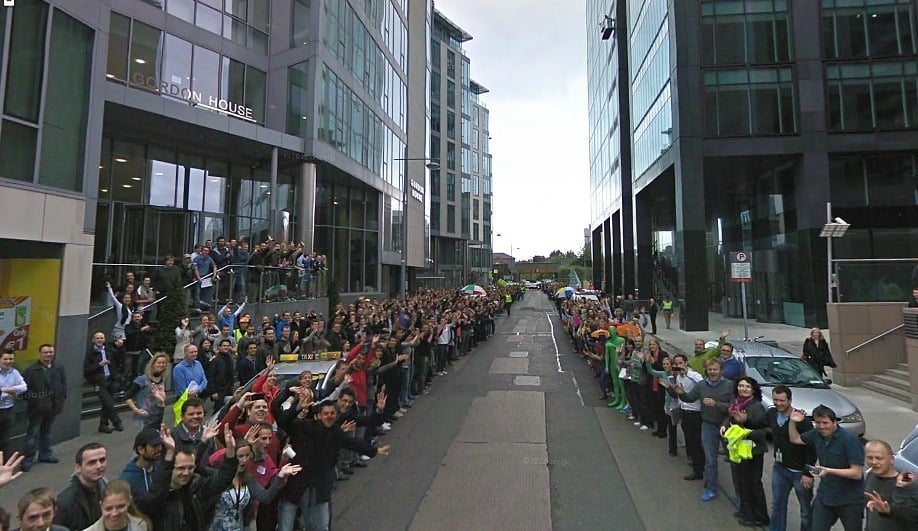 Spotted on Google’s Street View: the employees at the Dublin office line up outside the heart of the complex.

Google’s offices around the world, including its first Tel Aviv outpost, are like ambassadors for Silicon Valley’s irreverent start-up culture. The open-concept theme, where each space is unique in its quirk factor, continues in Google’s Dublin office, which serves as the sales and finance centre for all of Europe, the Middle East and Africa.

Spearheaded by Zurich firm Camenzind Evolution (which has designed Google’s offices in Zurich, Tel Aviv and Stockholm), in collaboration with local firm Henry J Lyons Architecture, the project comprises no fewer than five restaurants and 42 micro kitchens and communication hubs. In addition, there are game rooms; a fitness centre complete with pool; conference, learning and development centres; and over 400 informal and formal meeting rooms – a whopping total of 47,000 square metres in all.

Although there are overarching categories that structure the office’s various departments – one floor, for example, is devoted to “Search,” while another, turned over to app developers, is called “Appiness” – the look of each micro-environment is as unique as its function. There are white futuristic hallways; a diner modelled on the inside of an aquarium; a jungle-themed workroom packed with plants; and even a tiny breakout area hidden inside an over-sized “tree trunk” in a section evoking a forest landscape. The only common thread tying all these spaces together is a desire to foster as much interaction among Google employees as possible.

While some spaces exemplify a spare aesthetic, most feature an eclectic assortment of furnishings. In the lobby, Blå Station’s friendly Oppo seating, upholstered in Google’s signature primary hues, lends the space a feel that is simultaneously welcoming and invigorating. Elsewhere, lighting by manufacturers such as Foscarini, Slamp, Muuto and Normann Copenhagen add sophistication, whimsy or a hard industrial edge.

The Dublin HQ occupies a prime location in the city’s historic docklands district, which has gone from gritty to, lately, a hotspot for start-ups and the headquarters of some of Europe’s biggest tech companies, thanks to Ireland’s corporate-friendly taxation and regulation. Two new buildings, including the Google Docks – which at 14 storeys is the tallest commercial building in the city – join two pre-existing buildings, now completely refitted. Plans are in place for a bridge to connect the structures within the complex, further enabling the cross-pollination of ideas among the company’s different departments.

SHARE
Twitter, Facebook, LinkedIn, Pinterest, Email
TAGS
Commercial, Office,
AZURE is an independent magazine working to bring you the best in design, architecture and interiors. We rely on advertising revenue to support the creative content on our site. Please consider whitelisting our site in your settings, or pausing your adblocker while stopping by.