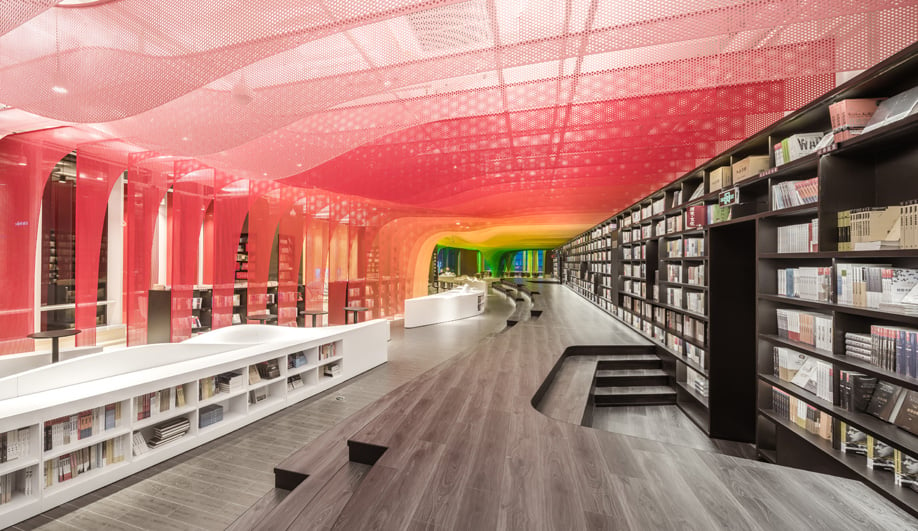 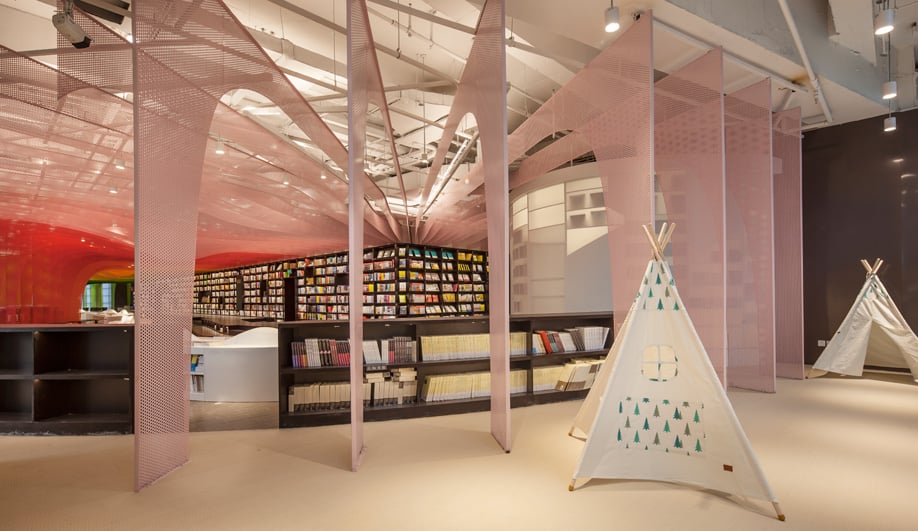 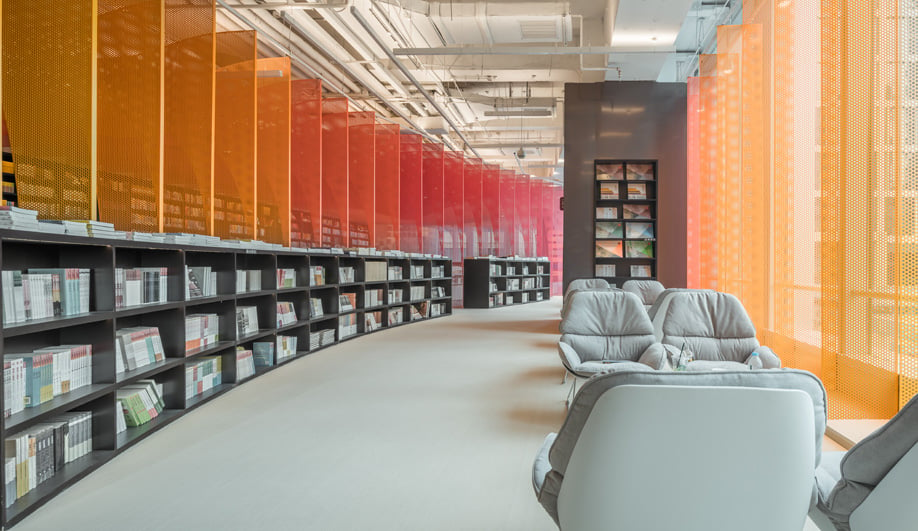 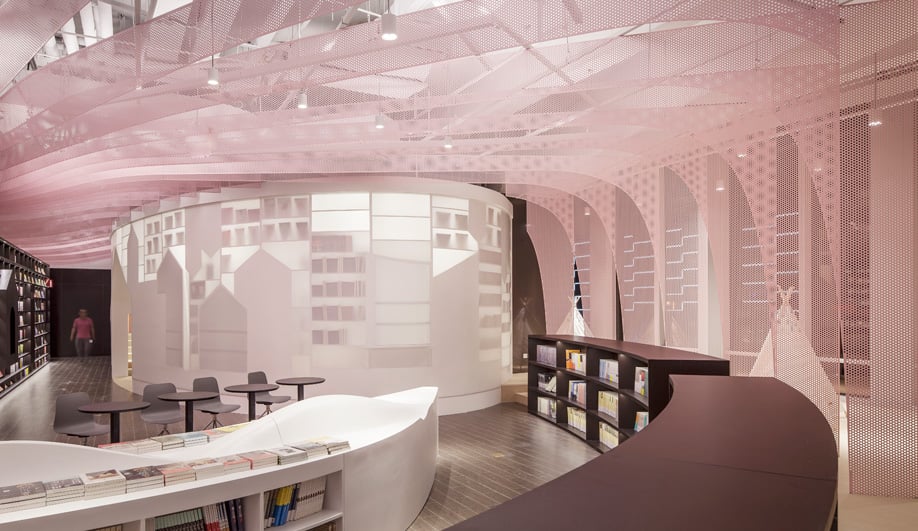 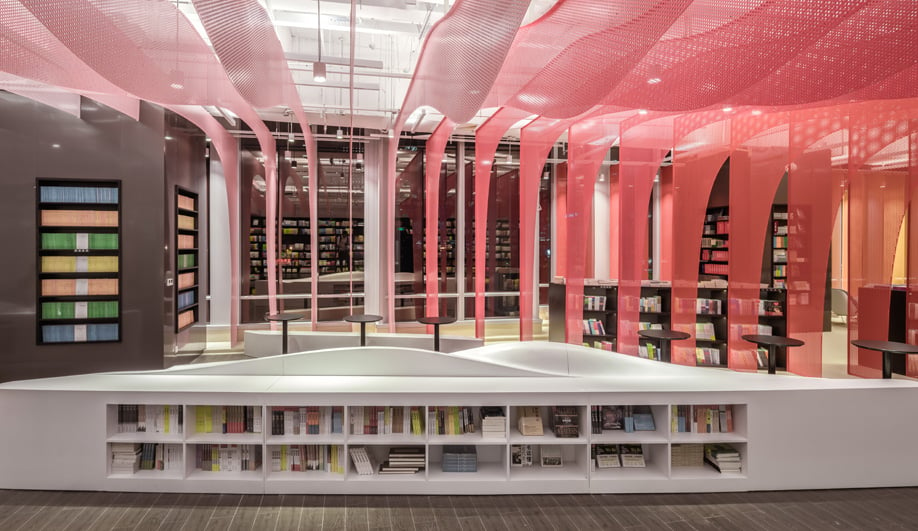 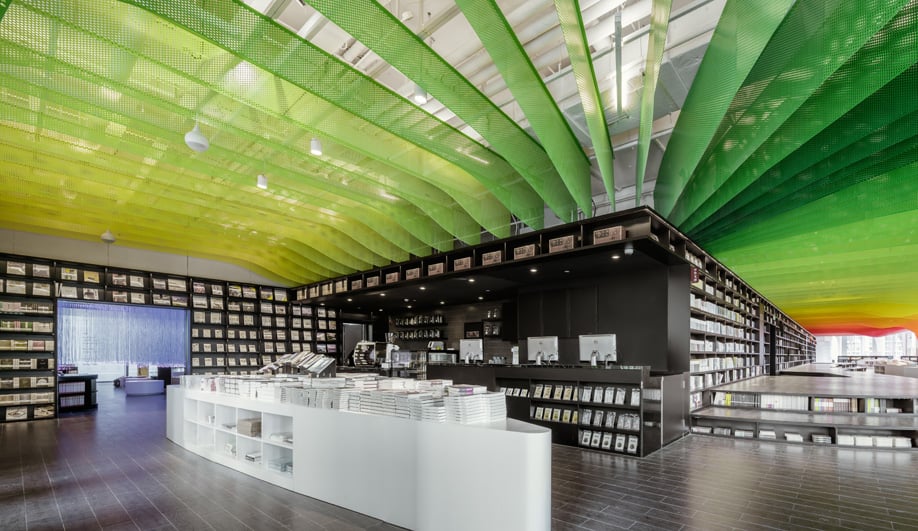 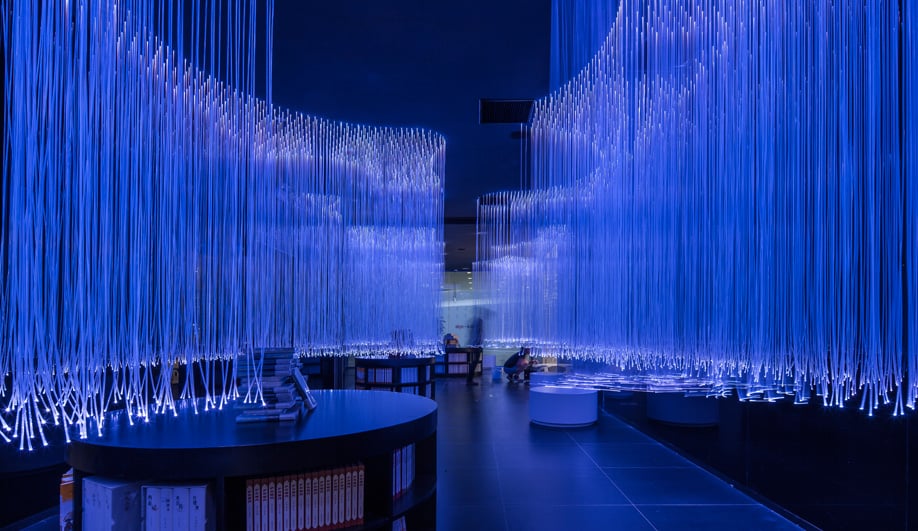 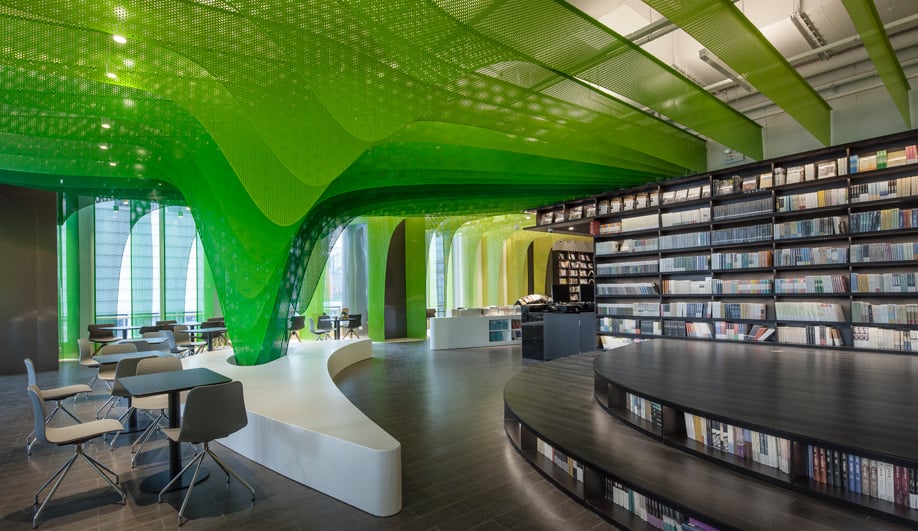 When Wutopia Lab began conceptualizing for the new Zhongshu bookstore in Suzhou, China, their primary goal was to “do a new bookstore to go beyond our old work,” the firm says.

The firm’s past projects – including a community club, a retail space for an eCommerce brand, and an artist’s home – are testament to Wutopia Lab’s penchant for the wildly imaginative, but the Zhongshu bookstore sees the firm taking it to a new level.

Viewed from the street, the only evidence that a whimsical bookstore resides inside a modern glass tower is a glimpse of rainbow-hued panels in the third-floor windows. “We needed to create a fascinating street view to draw people to step into the bookstore,” Wutopia Lab says. “The rent on the first floor is much more expensive than the third floor. Using the same money, we could rent half of the first floor or the whole third floor. We persuaded the client to get the third floor.”

Metal Rainbow, as the bookstore project is called by the firm, comprises 1,380 square metres that the architects have divided into distinct zones. The first, which serves as the entrance to the bookstore, is called The Sanctuary of Crystal. New arrivals are displayed on pre-fabricated transparent acrylic shelves in the centre of the room, which has glass brick walls and uses mirrored surfacing to create illusions of depth. Wutopia calls it a “shining white space, luring customers into the heart of the store.”

Juxtaposed against the whiteness is The Cave of Fireflies, a dark, glowing tunnel that connects the entrance with the main hall. Optical fibres suspended from the ceiling create an otherworldly glow in the room, where customers can select books to take into the reading area.

Here, the space opens up into the spacious and light-filled Xanadu of Rainbows, the most prominent and striking of the zones. Surrounded by windows, this is the room that is seen from street level. Xanadu’s defining feature is the huge rainbow canopy that extends from floor to ceiling, spanning the entire 800-square-metre space. The gradient coloured arches are thin perforated aluminum sheets, cut in an undulating form and installed with inconsistent gaps between, “thus creating spaces of different experiences,” the firm says.

Beneath the rainbow canopy is a café, additional book displays and seating for reading. “The concept is to create an abstract rainbow valley space, as a strong visual identity for the bookstore, and a metaphorical paradise for book reader.”

At the end of the rainbow is The Castle of Innocence, the children’s book and reading area. Contained by translucent ETFE walls, the room appears as an “inner world inside the bookstore.” To encourage interaction amongst children and with the books, Wutopia inserted peak-roofed alcoves within the bookshelves that encircle part of the room, where kids can crawl inside and flip through a book. Nearly all-white surfacing makes for a sharp contrast with the whimsical ceiling feature – a black surface punctuated with optical fibre to create a starry night sky effect.