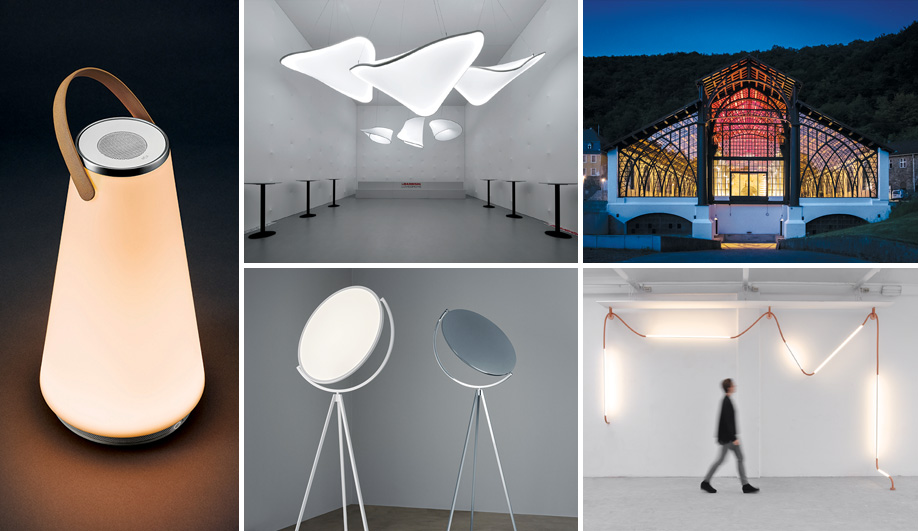 The following five projects are Awards of Merit winners in the categories of Lighting Fixtures and Installations. 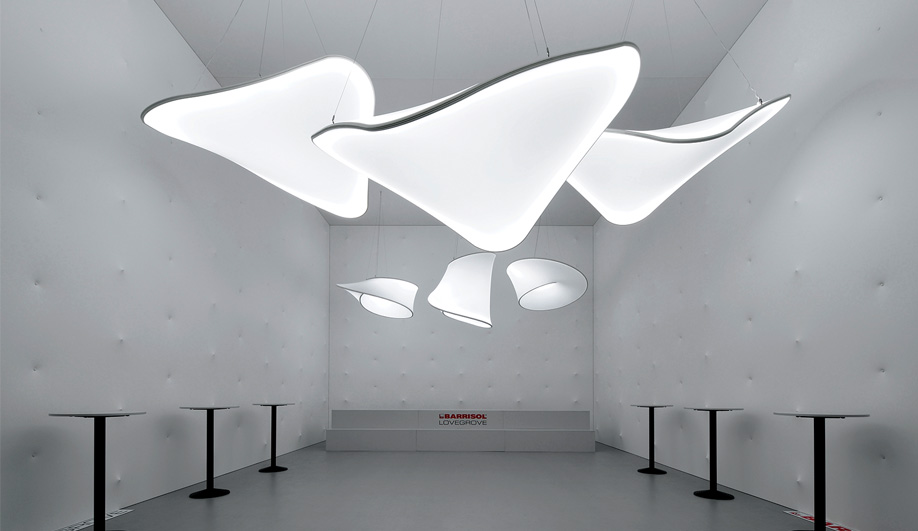 Manta
When pondering the far reaches of space and the ocean’s depths, palpable similarities emerge. Ross Lovegrove’s exploration of astral-oceanic confluence resulted in an organically shaped light that floats overhead – part sea creature, part spaceship. Created for Barrisol, it’s constructed with the same material the French company uses to make stretch-foil walls and suspended ceilings. Lovegrove fashioned two layers of the translucent material over a curved aluminum frame, lit from within by LEDs, to give Manta its undulating, membrane-like quality. 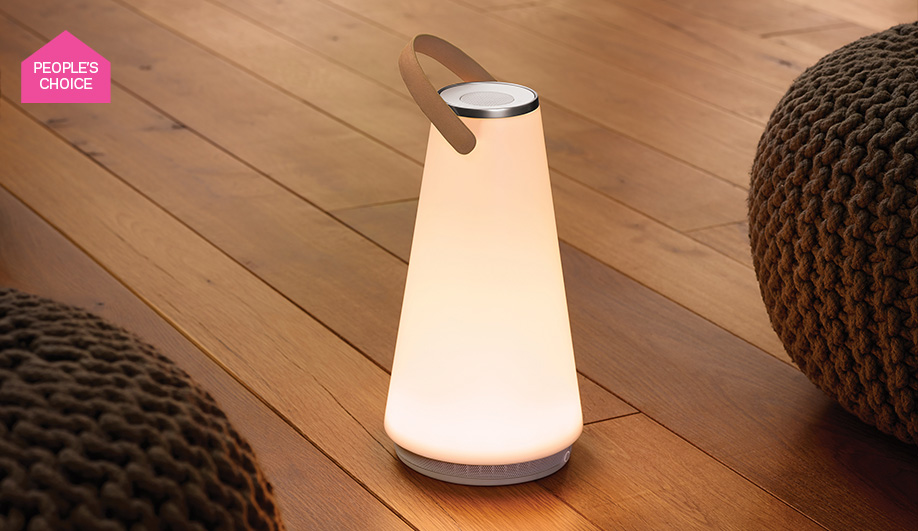 Uma Sound Lantern
Pablo’s portable lamp-speaker hybrid sets the perfect poolside atmos­phere. The stylish device achieves its campfire glow with LED Warm Dimming technology, which emulates the radiance of an incandescent bulb. A touch-sensitive dial adjusts both the brightness and the high-fidelity surround sound. For effortless ambience, it’s operable via Bluetooth, playing music for eight hours on a single charge. Above all, this luminaire thrives on the go: with leather handles, a durable polycarbonate shade and a silicone base, it can weather the most raucous get-together. 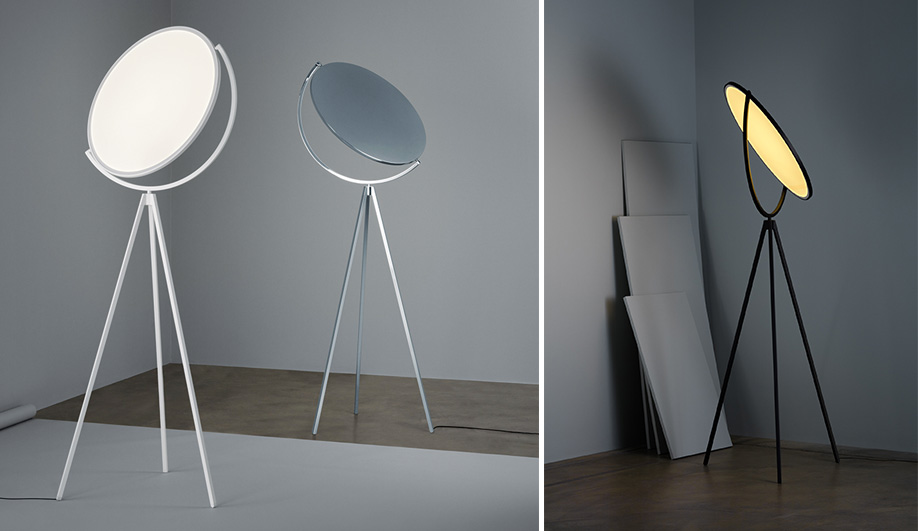 Superloon
Looking to bring the radiance of heavenly bodies indoors? Search no further than Jasper Morrison’s floor lamp for Flos. Inspired by the moon’s luminosity, Superloon consists of a round white panel embedded with a ring of LEDs along its circumference. The flat panel is mounted to a tripod with a gyroscopic base that allows for 360-degree rotation, while the intensity and temperature of ambient light can be controlled by an optical sensor concealed within one of the legs. Available in three finishes, Superloon will bathe any room in moonlit splendour. 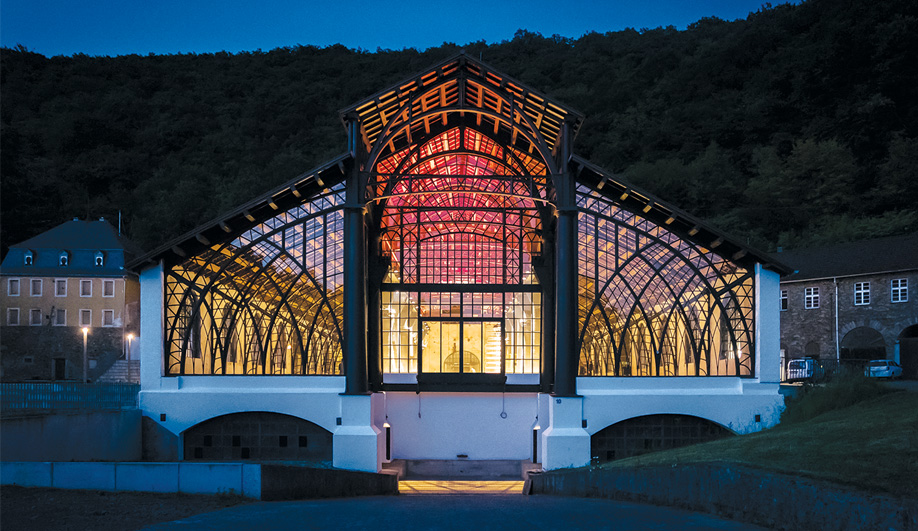 Sayner Hütte Foundry
Though the blast furnaces are long gone, the striking architecture of a former Prussian iron-casting facility turned event space is revealed through this fully controllable lighting design by Licht Kunst Licht. The firm outfitted the 186-year-old venue with concealed LEDs, carefully mounted and colour matched to comply with its heritage designation. The roof’s fiery red smoulder, realized by linear RGB lights, can be adjusted to any colour, while the back wall receives the interior’s sole source of direct illumination, in stunning contrast to the triptych of subtly lit aisles. 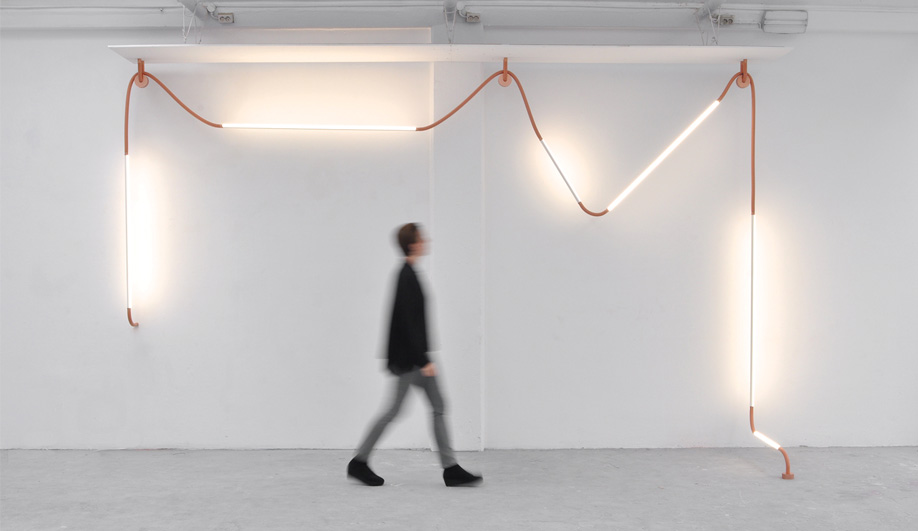 Mono-Lights
As they unspool from ceilings, down walls and across floors, like a model of a futuristic transit system, Mono-Lights both conform to and redefine a room’s boundaries. The minimal lighting system from OS ∆ OOS encases LED strips in easy-to-handle white plastic tubes, joined into segments by silicone foam connectors. Small pucks of grey-veined marble secure the terminus points to the ground, a wall or a power source. For a suspended effect, aluminum discs may be threaded through silicone foam loops to support the network.