A Toronto Home, From Edwardian to Minimalist
Pat Hanson of gh3 renovates an old house, carving out sensual, spartan beauty and animating the new interior with a sculptural staircase and surprising cathedral window. 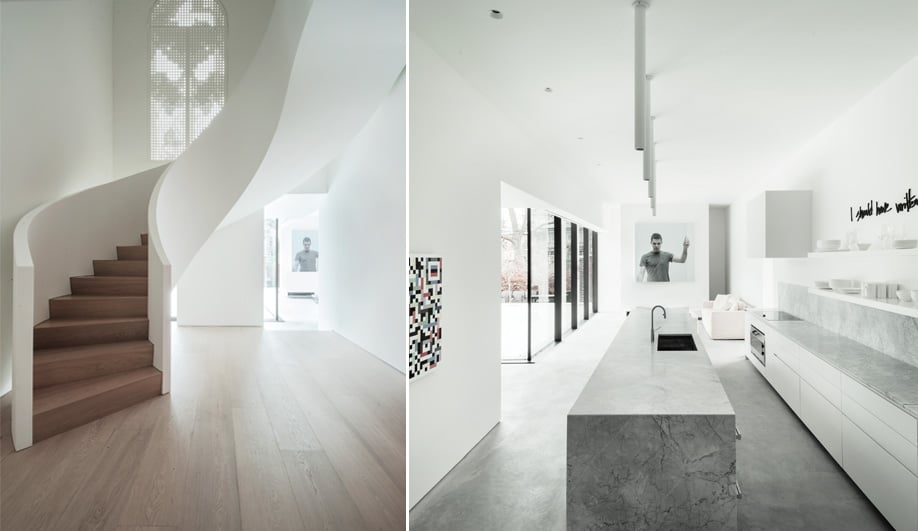 Left: A perforated screen covers the second-floor window, so as not to distract from the command­ing stairway. Right: The kitchen faces a bank of windows and glass doors that opens onto a nine-metre-square concrete patio. 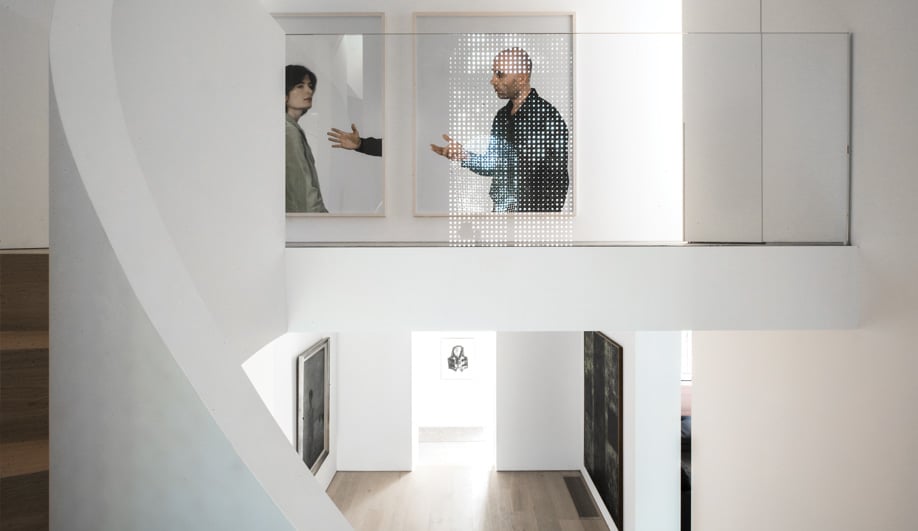 The owners are collectors of contemporary art, including work by Montreal photo rnartist Geneviève Cadieux.rn 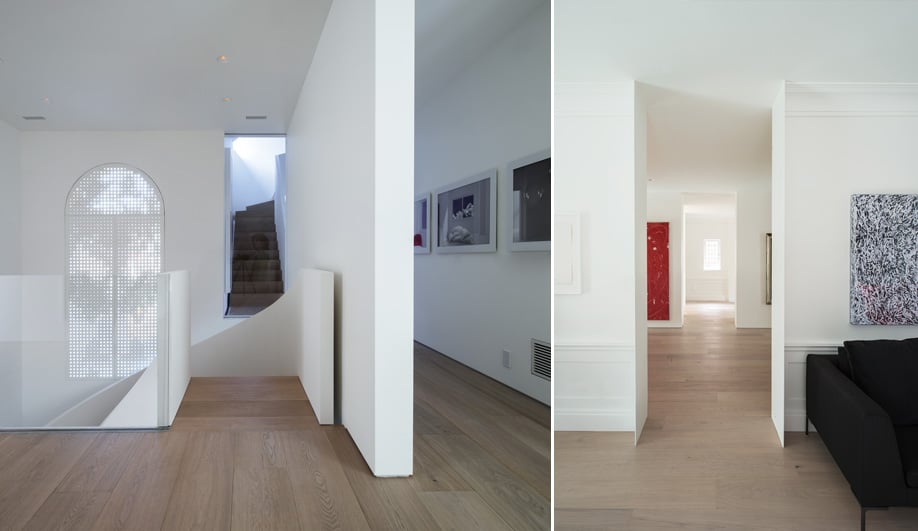 Left: White stained oak flooring was used throughout the house. Right: Aluminum “fins,” 30 centimetres deep, frame the living- and dining-room doorways. The slice effect contrasts with the ornate detailing of the original wainscotting. 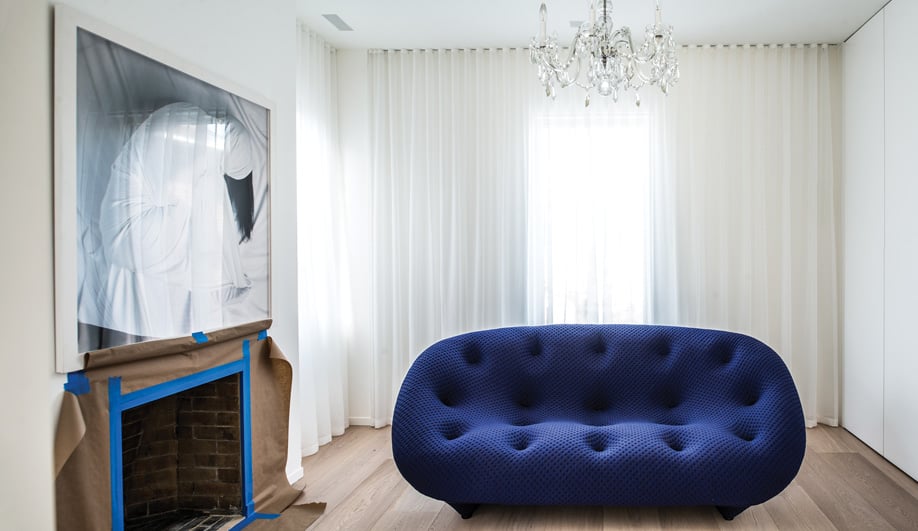 Ligne Roset’s Ploum sofa by the Bouroullecs occupies the centre of the master suite’s dressing room. 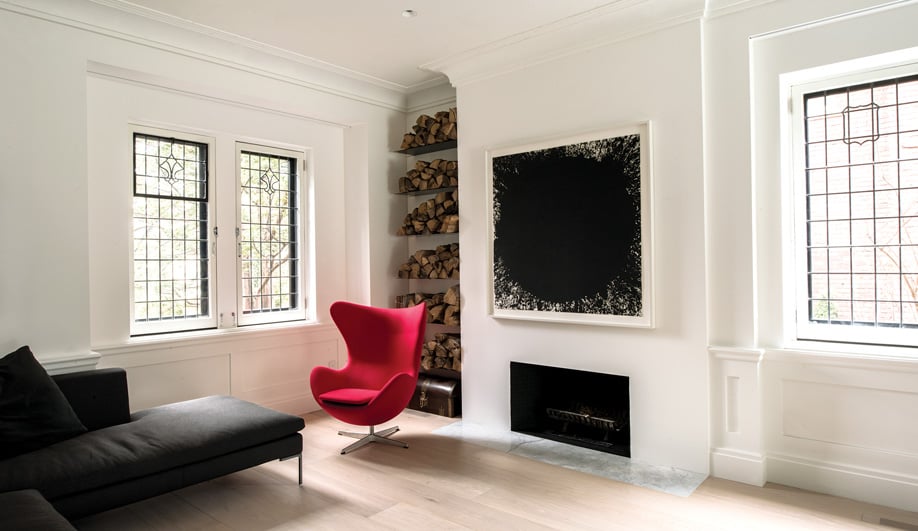 Old and new mix seamlessly in the living room. 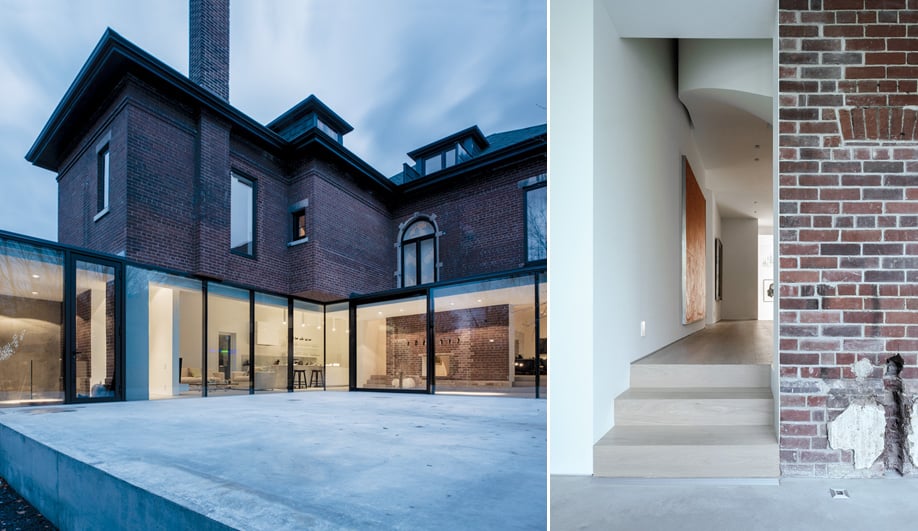 Left: An L-shaped glass wing wraps around the back of the house and surrounds a plinth-like patio. Right: Another example of how gh3 used super-thin “fins” to create frames around openings and sharpen the contrast between old and new.

If classical ornamentation and a strict hierarchy of spaces are the hallmarks of Edwardian architecture, then sparseness and free plans characterize minimalism. Because the two are almost diametrically opposed, it takes a deft touch to fuse them with harmony.

Architect Pat Hanson, then, has demonstrated her unique ability to blend these contrasting styles with a recently renovated house in Toronto. Hanson’s firm, gh3, is known for its strikingly sleek residences and inviting public spaces, including the award-winning Quadrangle at the University of Toronto’s Trinity College. Her latest clients – a couple with three children and an extensive collection of contemporary art – wanted to upgrade their 465-square-metre, century-old domicile. Their neighbourhood, Rosedale, is known for stately mansions and a resistance to anything remotely flashy.

The results look almost predestined. At the outset, a teardown and rebuild was off limits, because the house has a heritage designation (it was designed in 1908 by William Alexander Langton). Regardless, “It really is grand from the outside,” notes Hanson. “It was the interior that needed work.” Simply put, the spaces felt choppy and cramped.

Rather than knock down partitions and create an open, Miesian plane, Hanson chose to respect the original building’s formal intentions. She consolidated some of the rooms to make them larger (several closets at the front became one, for instance), but kept the centre hall plan. The living and dining rooms are still arranged on either side of a capacious foyer, with the sleeping quarters up the main staircase, and the kitchen and pantry tucked in the rear. Hanson merely wanted to enhance the spaces so they would be as resplendent as the exterior architecture suggested.

Many of the most graceful moves are straightforward, including aligning the doorways between the living and dining rooms to create a continuous flow, and edging the openings with floor-to-ceiling “fins,” each approximately 30 centimetres deep and made from painted white aluminum. The unique detail subtly draws the eye.

Bigger gestures have a more sublime effect. The central staircase’s location in the foyer has been preserved, but has been transformed into a dynamically twisting, sculptural form. At the top landing, a perforated MDF screen was placed over an existing cathedral window and casts dappled shadows throughout the day.

The most dramatic intervention is a glassed-in wing that juts off the back of the house and contains a spacious kitchen. The new eating area opens through glass doors onto an expanse of raw concrete, forming a back patio that in summer is dotted with outdoor furniture. The clients, who are also gourmands, requested a prep area that extends all the way to the existing garage. To make the L-shaped addition even loftier, the floor was dropped to accommodate 3.7-metre-high ceilings. With the window expanse reaching just over nine metres, and supported by an equally long steel beam, even Edwardians would approve of a room so filled with light.