Pebble is an organic form that exalts craftsmanship.

Each year, the AZ Awards asks one of its jurors to design a trophy. In 2021, before he had even confirmed that he would be available to be on our panel, Ini Archibong expressed his interest to create his own. “I love designing trophies,” he said. Obviously, we were excited. The designer, born and raised in California and based in Neuchâtel, Switzerland, is known for his striking creations for Sé and Bernhardt Design, among many brands. And for the AZ Awards, he has created a stunning piece that awardees – to be announced this Friday! – will treasure forever.

As his point of departure, Archibong focused on the magazine’s namesake. “Azure blue stands for infinity, which resonates with limitless human creativity,” he explains. He experimented with various concepts – Pebble was the standout. The imperfect rounded form, glazed in a soft gradient and stabilized on a brass base, felt both organic and futuristic. “A pebble is shaped by time and water,” Archibong says. “It’s an allegory of natural materials’ refinement and balance and of precision in traditional craftsmanship.” 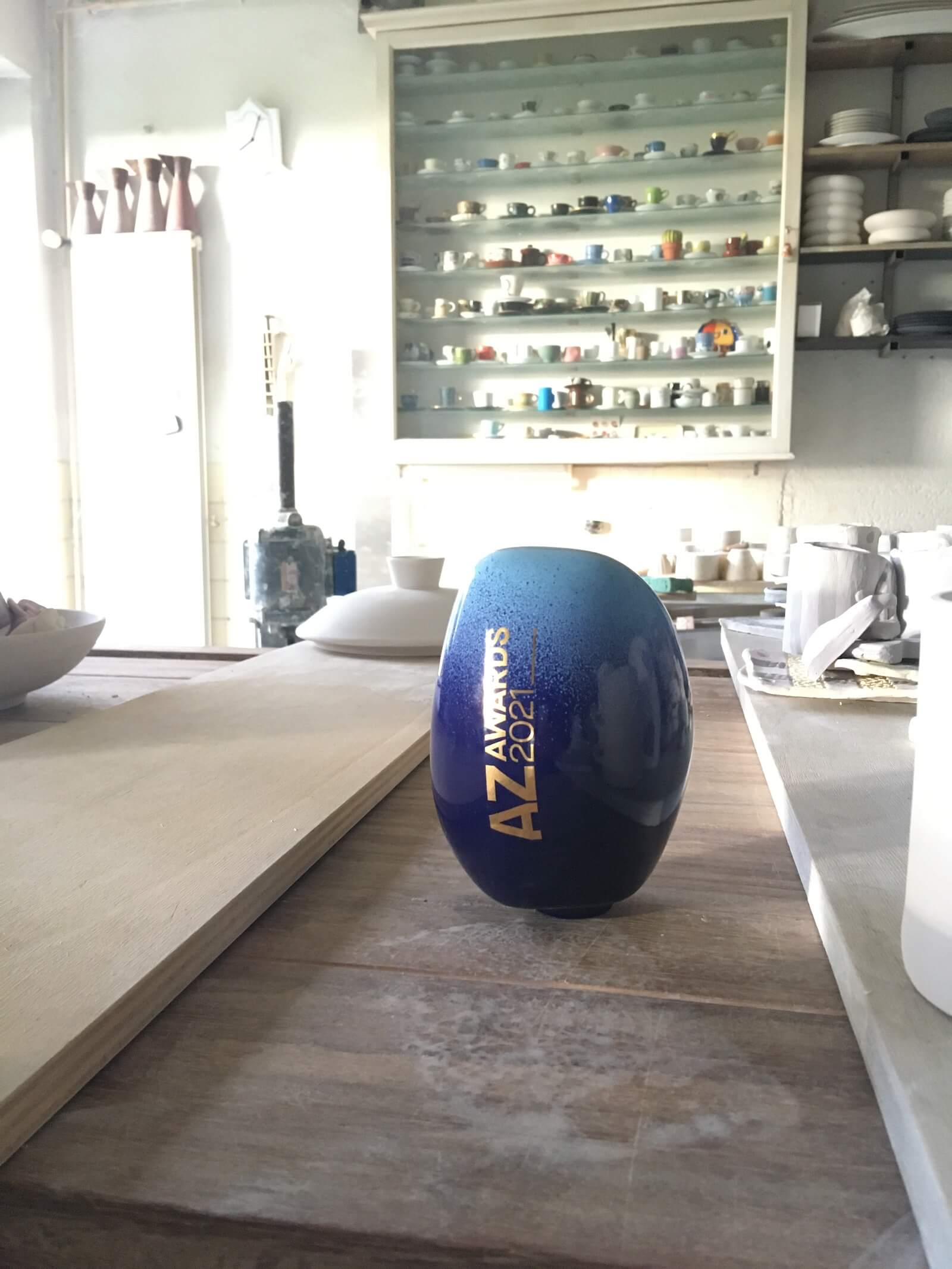 One of the first finished trophies, in Peter Fink’s studio

To achieve the level of craftsmanship he aspired to, Archibong partnered with the lauded Swiss ceramicist Peter Fink, with whom he has created products before. After Archibong 3D-printed a prototype of Pebble, at a size 10 per cent larger than the computer rendering because ceramic is known to shrink, Fink created a plaster mould and a clay casting slip. He was able to turn out a few Pebbles a day. They were then fired, sprayed with two glazes – one dark and one light to create the gradient hue, applied in a few layers to get the finish nice and glossy – and fired again. The final touches were affixing the brass base and applying the golden film bearing the AZ Awards 2021 logo.

The resulting piece, about 12 centimetres tall and nine centimetres wide, is lightweight and fits wonderfully in one’s hands. Just like an ocean-smoothed stone.

The Presenting Partners of the 2021 AZ Awards are Caesarstone, Keilhauer and Landscape Forms.

The Sponsors of the 2021 AZ Awards Winners Reveal are Ciot, Dark Tools and Scavolini.

Pebble is an organic form that exalts craftsmanship.