The 10 Best Product Designs of 2016
Welcome to our Best of 2016 series, where we tally up the greatest design and architecture moments over the past year. First in our series, the 10 best product designs that wowed our editors. 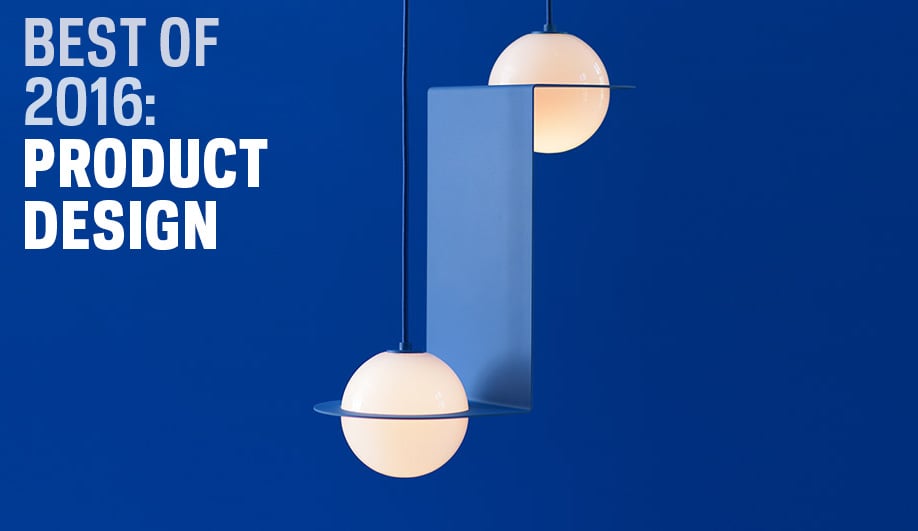 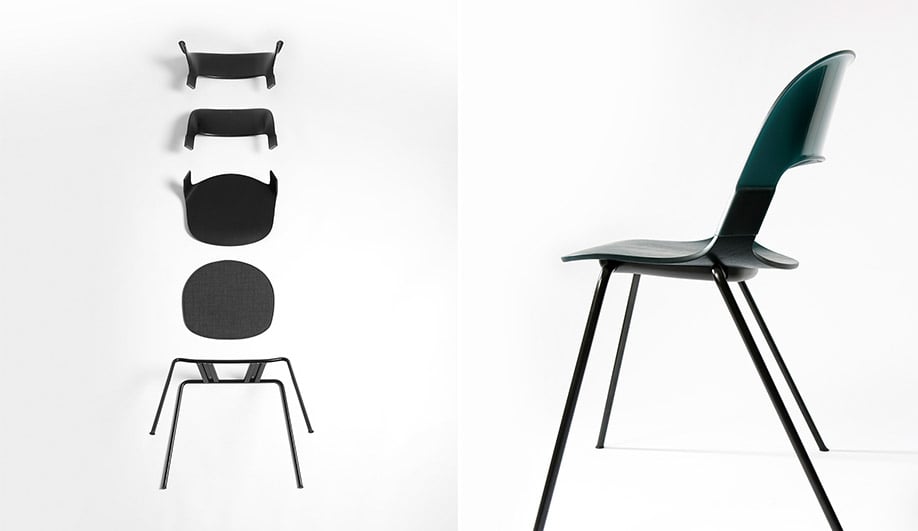 Best Seating: Pair Chair by Republic of Fritz Hansen
Making a standard stacking chair sexy may seem like an impossible task, but that’s what Benjamin Hubert and Fritz Hansen have done. The first collaboration between the London designer and the Danish furniture-maker, Pair was developed over three years of trial and error, with more than 30 prototypes refined before reaching the final design – a sleek seat that is visually intriguing with a shapely, swooping profile and slender, arching legs.

Pre-launched at the London Design Festival in September, the modular chair is a system of components that can be assembled in any colour combination: one seat with two backrests (with or without arms) and two base options (sled or four-legged). Adding another layer of interest, the injection-moulded polycarbonate backrests are formed with a 10 per cent transparency to give them a glass-like quality. 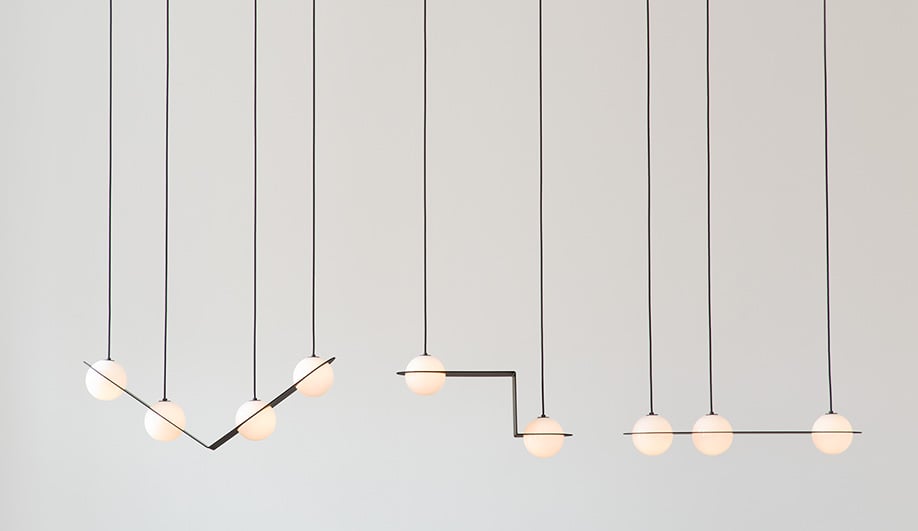 Best Lighting: Laurent by Lambert & Fils
Founded in 2010, this boutique lighting studio in Montreal is making a name for itself with lithe, angular lamps wrought in black and gold. With the Laurent collection, however, its predominantly Bauhaus aesthetic takes on a more contemporary tilt. Here, round-edged polygons in green and blue suspend, separate, and wrap around hand-blown bulbs in a celestial interplay of two and three dimensions. An embellishment-free play on space and form, these locally sourced and locally crafted pendants put Lambert & Fils at the top of the game. 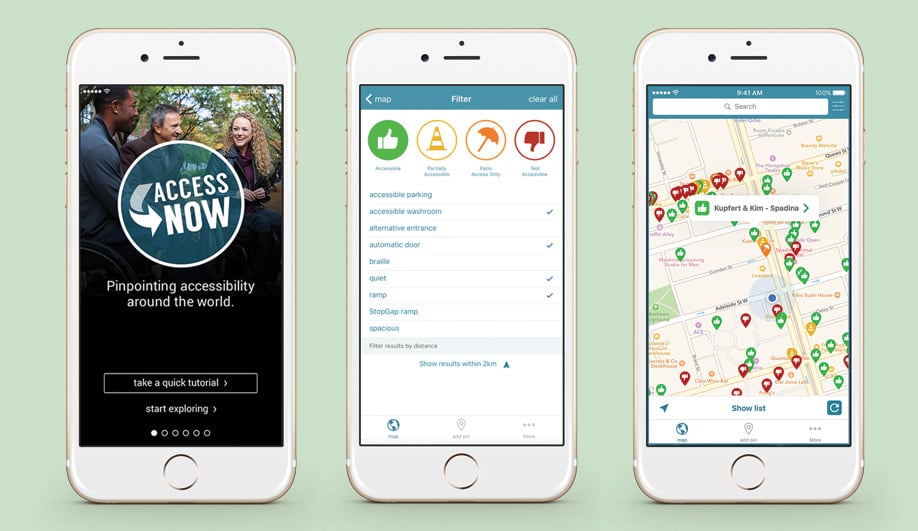 Best Product for Social Good: AccessNow app for iOS
The purpose of AccessNow is simple: provide information about whether restaurants, bars, shops, cultural institutions and other places of business and commerce are accessible to those with physical disabilities. What’s hard to comprehend is that no product like it has existed before. Designed by 26-year-old Maayan Ziv of Toronto, the iOS app (and website) crowdsources information about the accessibility of establishments and then places pins on a searchable map, with colour codes that indicate the level of accessibility. Users can filter their views by colour, by proximity or by the type of business. There are currently pins in 29 countries.

Ziv, who was born with a form of muscular dystrophy and has used a wheelchair all her life, devised the concept when her frustration with hard-to-find or inaccurate accessibility information hit peak levels. In a recent VICE feature, she explained, “I’m a regular young person who’s interested in going out and doing things in life. And so is every other person who has a disability.” 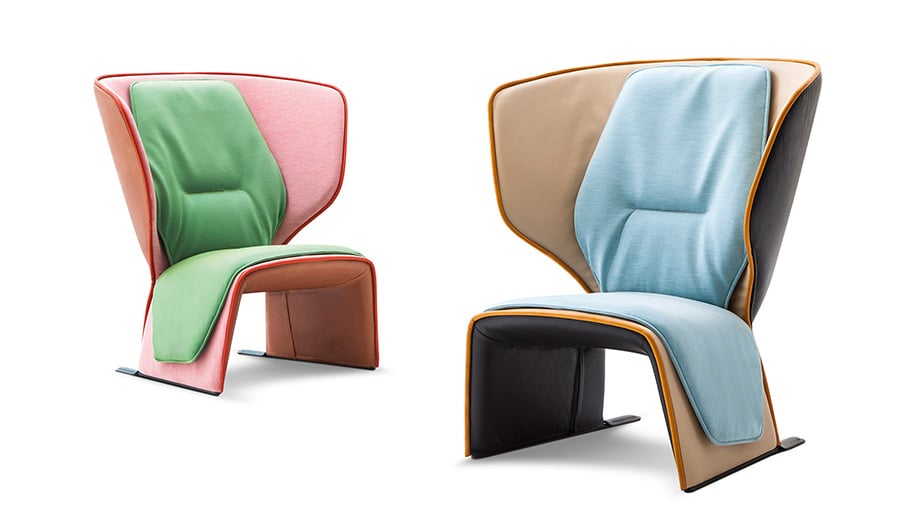 Best Furniture Collection: Origins of the Future by Cassina
With her first collection as Cassina’s art director, Patricia Urquiola reflected on the Italian manufacturer’s 89-year evolution to develop a series that pushes towards the unknown. Unveiled during Milan Design Week in April, the collection, Origins of the Future, includes pieces by such heavy-hitters as Philippe Starck, Konstantin Grcic and Ron Gilad, along with Urquiola herself.

Each piece is very strong. Taken together, they are a formidable family, from Grcic’s abstract Props – five sculptural elements that are defined by how they are used – to Urquiola’s Gender chair (above), a coming together of two shapes that seem to blur the lines between masculine and feminine, and strong and delicate. Origins is a compilation that feels unequivocally rooted to Cassina’s phenomenal history as a high-end furniture manufacturer, which coincides nicely with its upcoming 90th birthday. 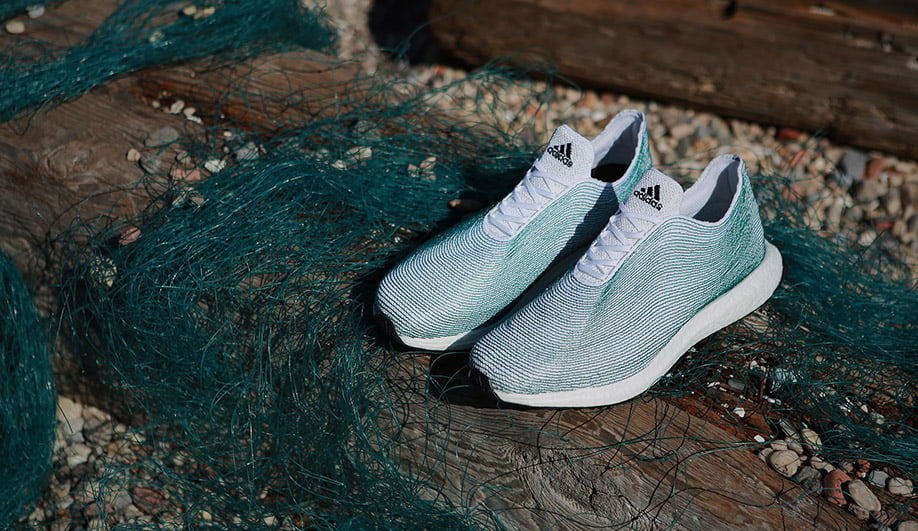 Best Apparel: Parley Runners by Adidas
These instantly iconic runners made from recycled ocean plastic are the brainchild of Adidas and awareness group Parley for the Oceans. Designed by Alexander Taylor, the footwear features uppers made from plastic waste and discarded fish nets that have been recovered from polluted oceans and machine-spun into fibres of white and seafoam green.

When the prototype made its initial debut in 2015, the internet went wild for them, and Azure featured them as part of a report on the growing trend in advanced footwear that’s both smart and green. The project hasn’t lost its momentum. In fact, after launching the first 50 pairs in June, Adidas has promised to manufacture a million more in 2017. That’s 11 million bottles retrieved from ocean waters. Better for the planet, better for you. 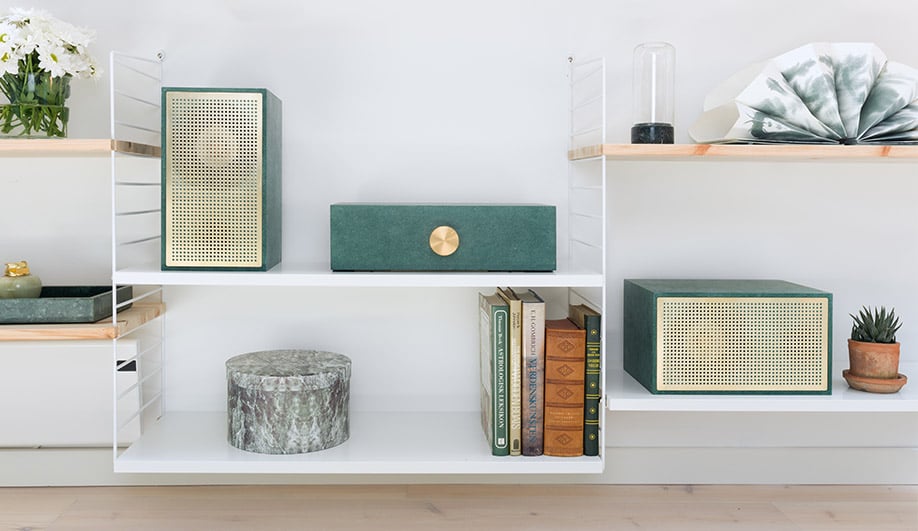 Best Home Tech: Serpentine Stereo by Osloform
In a world full of chrome and black speaker systems, it’s refreshing to see a young design team veer off the beaten track. Handmade in Norway by the newly established studio Osloform, the Serpentine stereo offers top-quality sound in a modern, minimalist casing. Dyed-wood fibre panelling and a single brass knob lend the amplifier a textured, timeless look. With brass speaker covers to match, the simple colour pairings and sharp material contrasts make this Bang & Olufsen-powered audio system not only an audiophile’s dream, but a design-lover’s too. 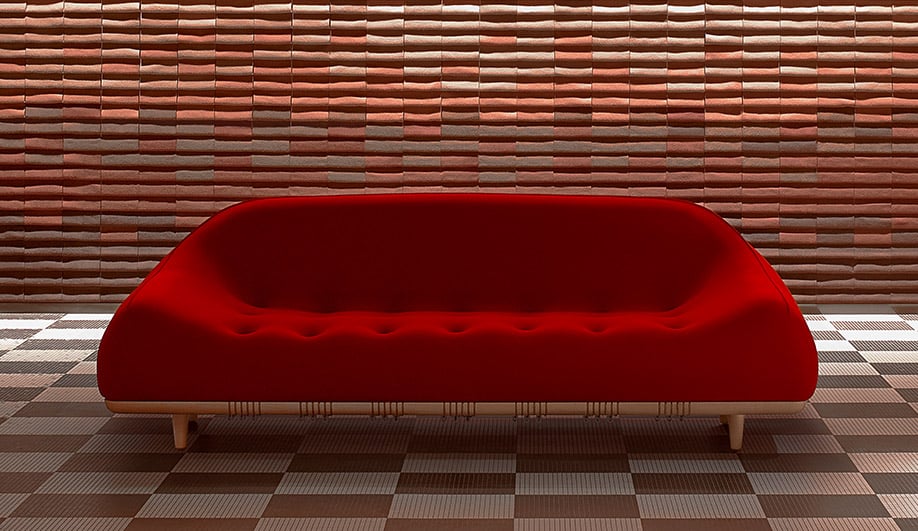 Best Product by a Student: Mellow by Bernhardt Design
Océane Delain is definitely one to watch. She sparked critical praise at ICFF last May with Mellow, the name of her sofa concept that was conceived while she was still an industrial design student in Paris, where she focused her studies on how people use and interact with objects.

Mellow’s main feature is the ability to adjust softness. Toggles at the base hook and unhook, allowing the seat to release tension, or add more. American furniture brand Bernhardt worked with Delain to bring the sofa’s construction up to top manufacturing standards and it is now in production.

It’s not surprising Mellow has made our Best Product Designs of 2016 list. Sitting on a slim maple platform, the amorphous seat is made from foam wrapped in a medical-grade fabric that has superior memory retention and no bias in the stretch, so it pulls equally in every direction. In other words, its construction is as refined as the sofa’s concept. 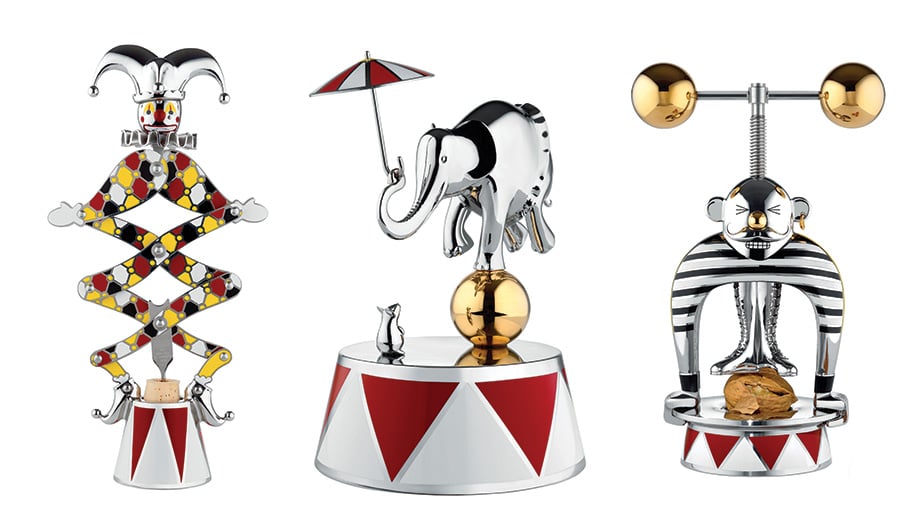 Best Accessory: Circus by Alessi
Marcel Wanders credits his 2012 Fatman cake stand as the inspiration for Circus. However, those who have followed the flamboyant Dutchman’s career over the past few decades will see a direct path between this new line and his 2002 Nosé, for jewelry brand chi ha paura.

That now-famous golden-clown-nose-as-accessory inspired the branding for Wander’s own studio, and, now, it’s the theme of this three-ring spectacle for Alessi. Full of personality, the Circus collection includes the Strongman nutcracker, the Candyman candy dish, the Jester corkscrew, and the Ballerina music box with an elephant balancing on a golden-hued ball. Each object is polished stainless steel and limited to 999 numbered copies. 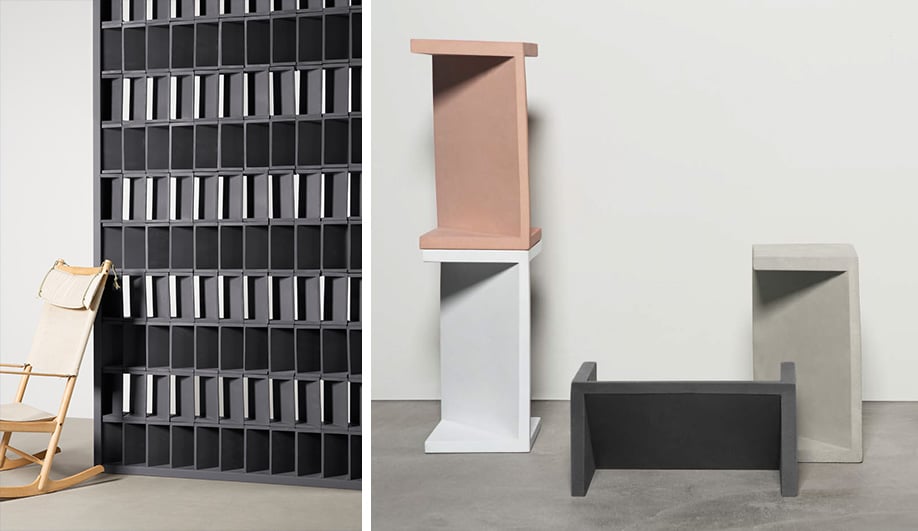 Best Solid Surfacing: Mistral by Mutina
Edward Barber and Jay Osgerby found inspiration for this collection in the terracotta vent tiles they spotted while travelling through the Italian countryside. Recognizing their function to provide natural ventilation, the duo saw their potential as partitions, concealing or revealing depending on their arrangement. The result is a series of 3-D tiles that raise expectations of the usually one-dimensional surfacing material to new levels – and depths.

Made of extruded and glazed terracotta, the tiles, which almost resemble pared-down cinder blocks, have a perfectly balanced design that can be composed vertically or horizontally, opened or closed, indoors and out. This marks the third collaboration between Barber and Osgerby and the Italian tile producer Mutina. It’s safe to assume we can expect more to come. 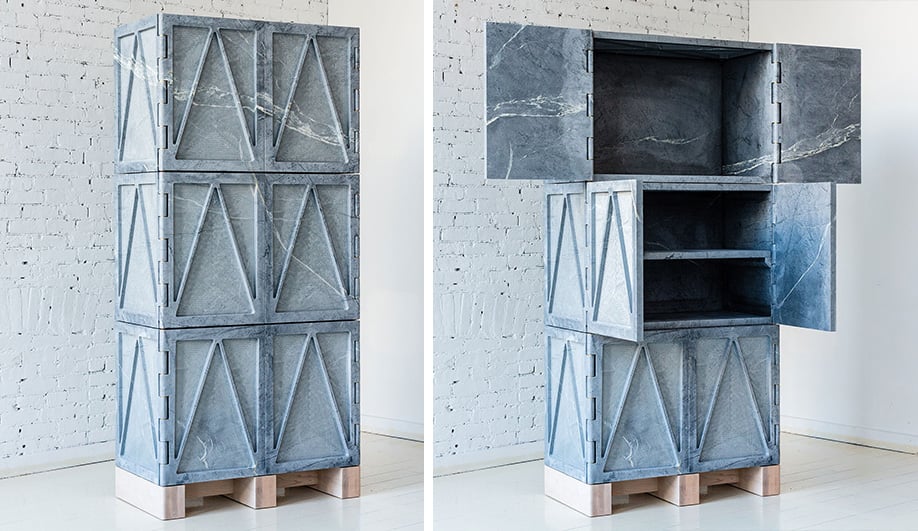 Best Custom Product: Relief Stone Cabinet by Fort Standard
Since its founding in 2011, Fort Standard of New York has been rolling out beautifully crafted furniture pieces, lighting, accessories, even kids’ toys, that sport an undeniably warm contemporary aesthetic. In May, they unveiled one of their most ambitious collections to date: a handcrafted series titled Qualities of Materials that turns familiar household objects – chairs, cabinets and side tables – into functional works of art.

While each piece has its merits, the showstopper was the Relief Stone Cabinet carved out of soapstone. Its makers, Gregory Buntain and Ian Collings, have spent years experimenting with ways to rethink and retool new and familiar materials, and soapstone (typically reserved for countertops and flooring) looks positively artful realized as a three-storey cabinet. Even the hinges are made from stone and are able to support the weight of the doors.

Qualities of Materials also represents Fort Standard’s foray into the collectors market. “We don’t want to turn into just a furniture company,” they told the press earlier this year. “We have our home goods collection that does well for us, but we’re interested in [shaping] our business so that we can continue to spend the majority of our time designing. Taking a step towards the collector’s market will allow us to do that.”