The Eclectic Casa del Acantilado in Spain
On a cliff above the Mediterranean, an unusual house has been built with zoomorphic features. The project is a first for GilBartolomé of Madrid. 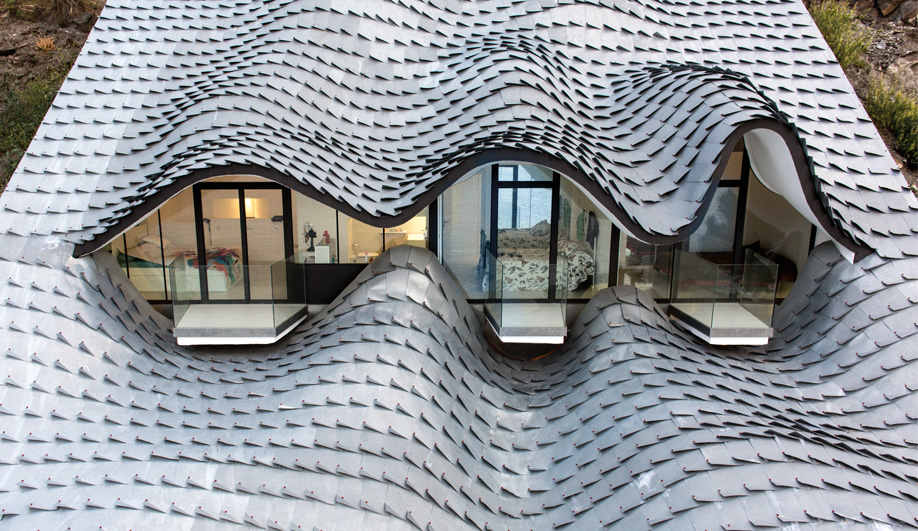 The two-storey dwelling’s zinc cladding and eyebrow-like overhang give it the look of a snarling animal that’s been likened to the face of a dragon. 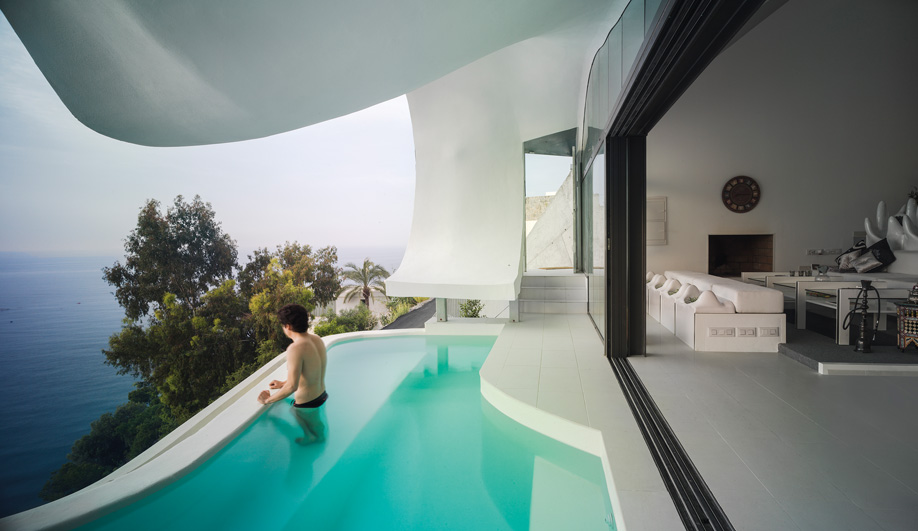 A pool and a patio extend off the living area. Stone flooring helps to keep the interior cool and clean. 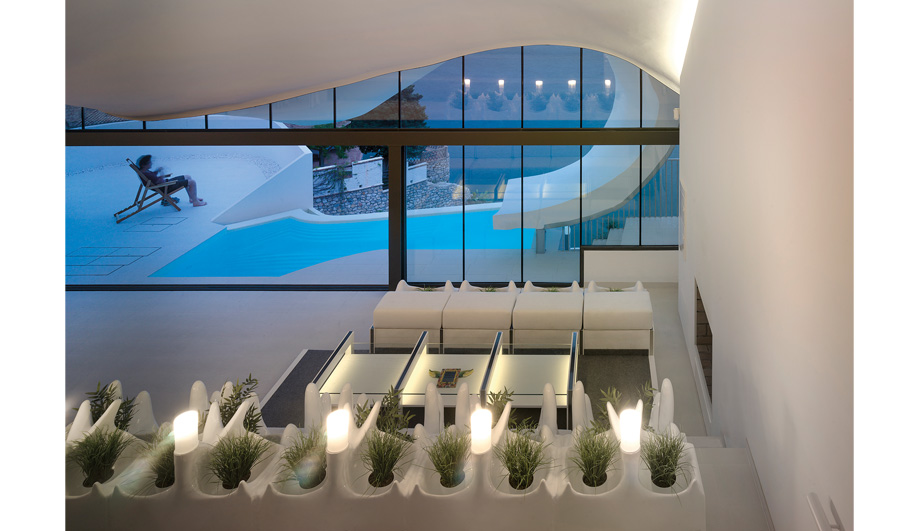 The quirky details carry through to the furnishings, designed by the architects, and include a series of sculptural illum­in­ated planters. 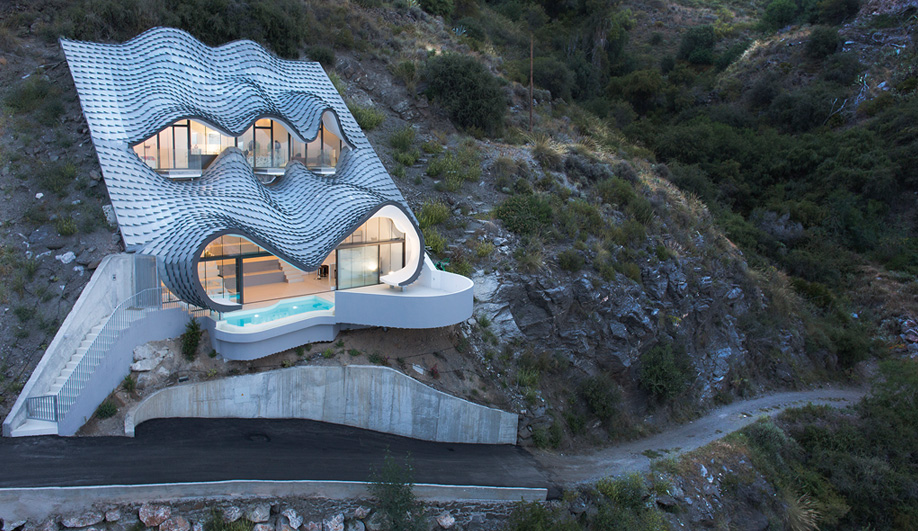 Because the house is partly em­bedded in a hill, the interior maintains a consistent 20-degree temperature year-round. 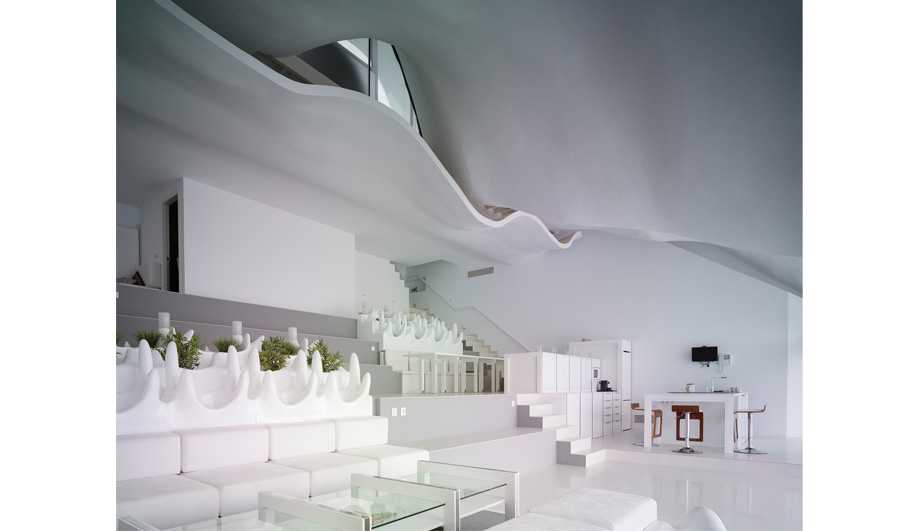 The view overlooking the Mediterranean, from one of the three upstairs bedrooms.

On a cliff above the Mediterranean, an unusual house has been built
with zoomorphic features. The project is a first for GilBartolomé of Madrid.

It has already been the subject of endless conversations, not just among architecture aficionados, but also by anyone who comes across it. There are several reasons why Casa del Acantilado (house on a cliff) has grabbed so much attention, good and bad. The architects have their own explanation for its unusual form and scale-like cladding. Pablo Gil and Jaime Bartolomé founded their Madrid studio, GilBartolomé, in 2007 after living in London, where they both studied at the Bartlett School of Architecture. They went on to work at two formidable studios: Bartolomé at Zaha Hadid’s office and Gil at Richard Rogers’.

The two-storey dwellingu2019s zinc cladding and eyebrow-like overhang give it the look of a snarling animal thatu2019s been likened to the face of a dragon.

Beyond their professional connections, what they learned at Bartlett is firmly rooted in their practice. “The school encourages students to develop a personal vocabulary and an associated technique,” says Gil. Both architects are comfortable with what they describe as “an explosive emotional experience from users.” Says Bartolomé, “We really believe architecture can provide an experience similar to that of music, and we try to squeeze that idea to the max.”

Casa del Acantilado is clearly a provocateur. The clients, a young couple with a child, owned the difficult plot of steep hillside in Granada, but the awkward siting also provided some amazing views of the Mediterranean. Before deciding on a firm, they invited four studios to pitch ideas, and fell for GilBartolomé’s peculiar concept immediately.

The two-storey inter­ior’s main level is multi-tiered, with a kitchen and a large living room that opens to a cantilevered terrace and a swimming pool. On the floor above are three bedrooms, each with a balcony overlooking the sea; in one, a movable wall allows two rooms to become one with an ensuite bathroom. Due to the 42-degree incline, the house is partly embedded in the hill, like a cave. This construction, traditional to the region, keeps the interior at a constant 20- degrees Celsius throughout the year.

Because the house is partly emu00adbedded in a hill, the interior maintains a consistent 20-degree temperature year-round.

The roof is the main feature. Like a second skin, it was produced using a handcrafted formwork system and efficient deformable metal mesh. This technique, says Gil, cost far less than more common options, such as timber or steel. The surface is covered in handcrafted zinc scales that flip up at one corner to catch the light.

Collectively, they provide a sense of movement, similar to the reflections of the sea; as well, they make the jagged surface resemble a dragon’s skin. It’s this perception of the house, as an snarling animal, that makes it so mesmerizing. “We have a much higher emotional response to animals than to other humans or objects,” says Gil, “so we have tried to make a facade that evokes the idea of an animal and therefore provokes our fascination.” ­