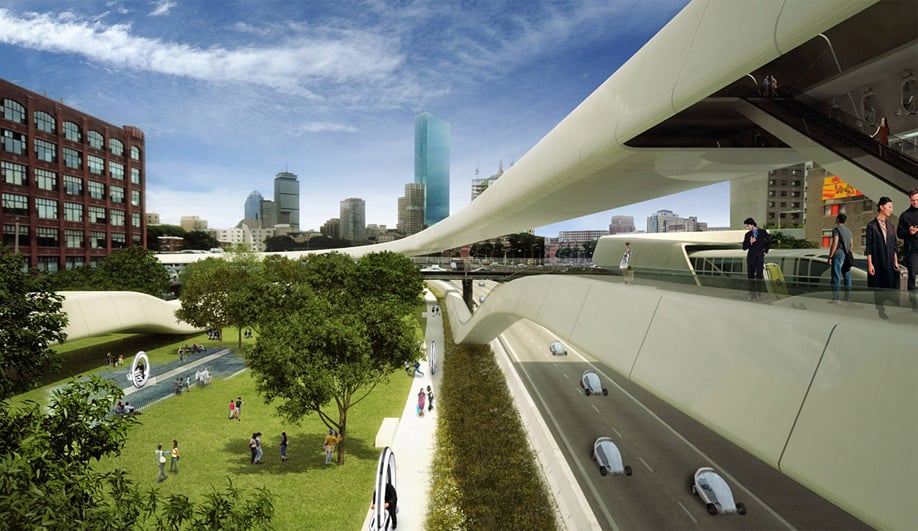 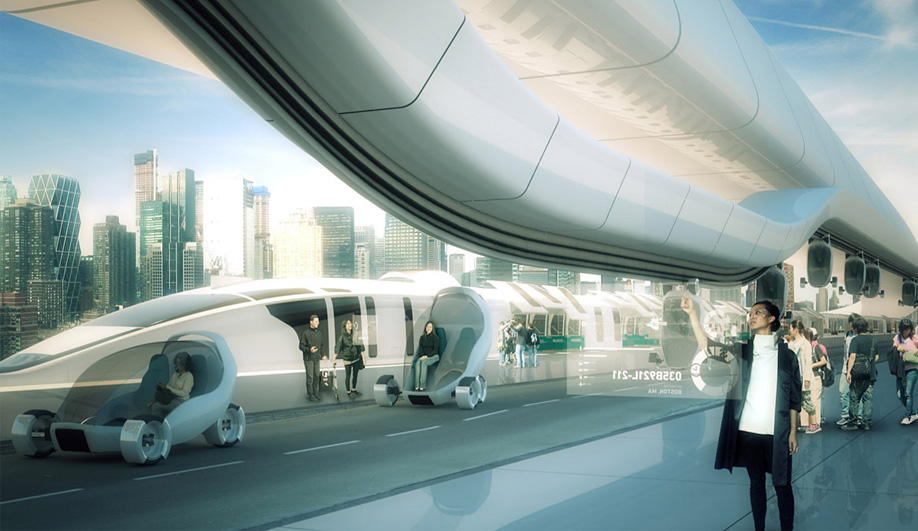 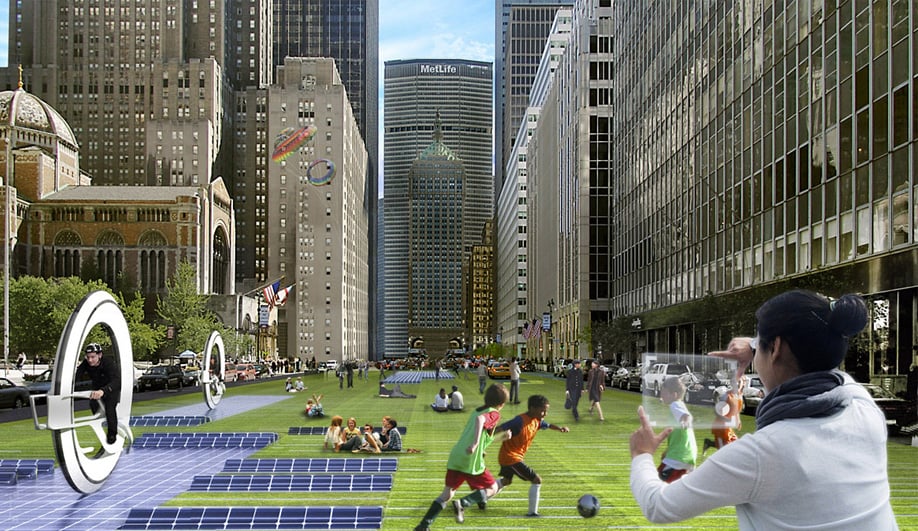 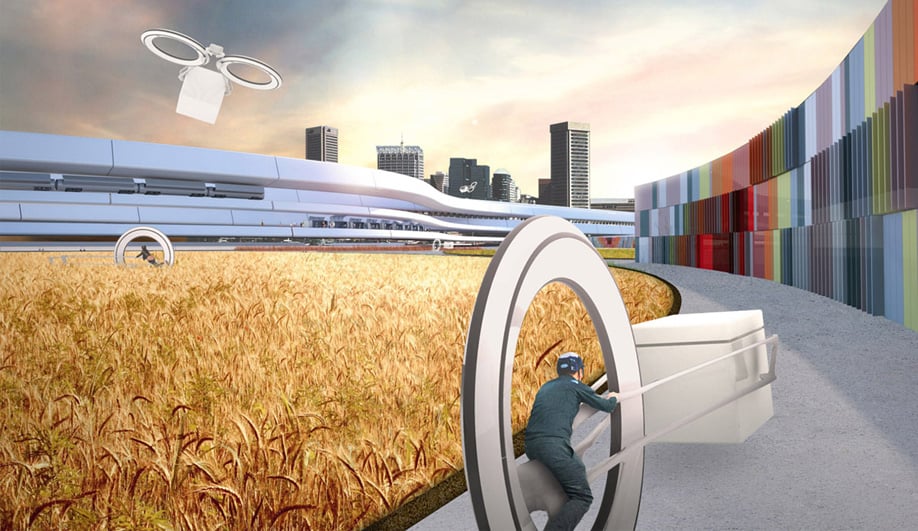 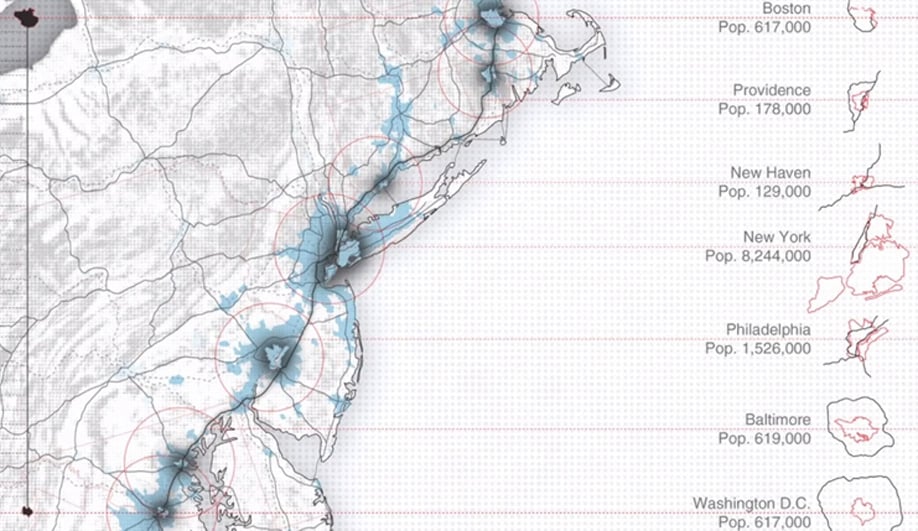 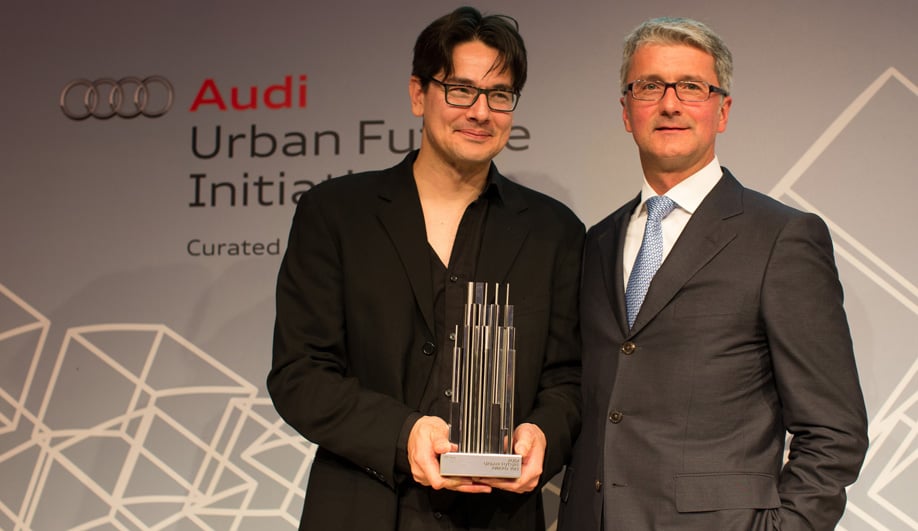 The Shareway 2030 proposal by principals Eric Höweler and Meejin Yoon would create a network of roads, train tracks and tunnels in the mega-region known as Boswash. It starts in Boston and connects to Providence, Rhode Island; New Haven, Connecticut; New York; Philadelphia; and Baltimore; and ends in Washington, D.C. The plan, which would effectively merge automotive and public transport, has been referred to as the new American Dream because it upends the traditional American Dream. In doing so, it responds to what the duo see as a generational shift: young people aren’t as interested in attaining private property as their grandparents were, but want to see a collective investment in modern, accessible and inclusive urban infrastructure.

The transportation bundle includes a proposed main artery – dubbed the elastic road – to accomodate cars (the proposal calls for futuristic semi-transparent ones), bicycles (huge, sleek unicycles) and pedestrians. Above this 3.9-million-mile stretch, there would be a stack of tunnels, for high-speed and freight trains, and for electric pods and cargo trucks, linking to 300 ports, 532 railway stations and 376 commercial airports. All of the points on this network are connected both physically and virtually. The system’s interactive software component would allow travellers to customize their routes, creating itineraries that take into account socializing, dining and other activities that can be enjoyed along the way.

It’s an impressive pitch that the jury, which included architects Wang Lu and Jürgen Mayer H. and Audi chairman Rupert Stadler, deemed to be the most thoroughly resolved response to the contest brief. Of the five finalists, this concept showed the most potential to be realized by the prescribed 2030 timeframe of the Audi Urban Future Award, which was announced in October.

Citing the continual increase of cars on the road alongside a decline in spending for the required infrastructure, Höweler + Yoon’s plan also considers the environment, with its vehicles capturing and recycling their breakaway energy. Accommodating up to 53 million travellers daily, it also repurposes the underused property adjacent to such major highways as the i95. “Hybridizing infrastructures could re-invent them to serve as housing, urban agriculture or energy production,” state the duo in the project brief.