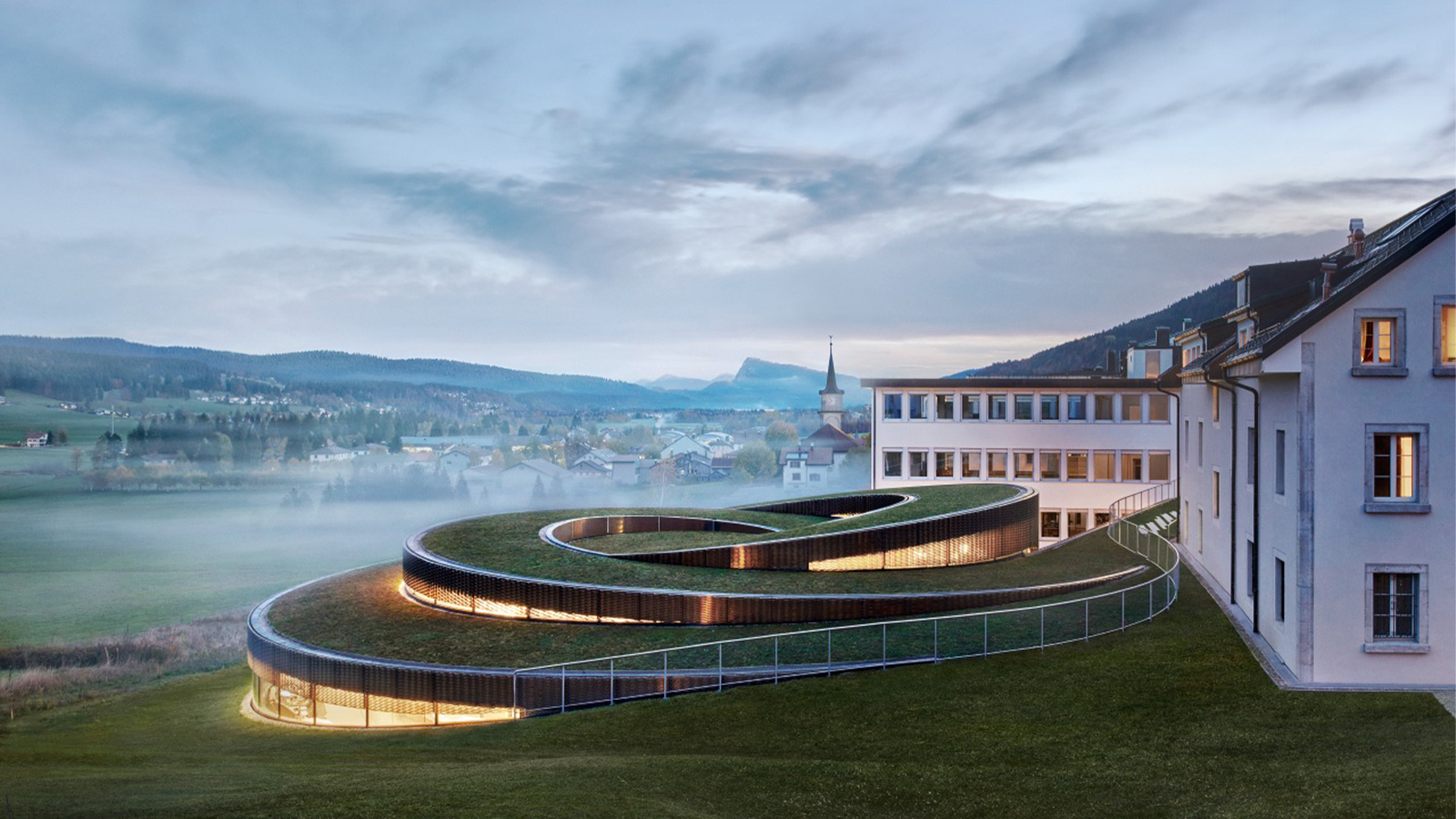 In Switzerland, a Team Led by BIG Crafts a Showpiece Museum for a Storied Maker of Timepieces

In the hidebound world of luxury watchmaking, Audemars Piguet is a bit of a rebel outfit. Family-owned since its founding in Switzerland’s Vallée de Joux, the 145-year-old brand has long embraced the avant garde, introducing, for instance, some of the thinnest wristwatches ever made, not to mention one of the world’s first quartz movements in the late 1960s. It is only natural, then, that its new museum — realized by Bjarke Ingels Group’s in-house think tank, BIG Ideas, in collaboration with exhibition design firm Atelier Brückner of Germany — should be equally groundbreaking.

And that can be interpreted literally. Located in the village of La Brassus, some 58 kilometres north of Geneva, the Musée Atelier Audemars Piguet rises from the ground like a giant fiddlehead, its spiral-shaped, grass-topped form intended to evoke a mystery watch (an horological term for a timepiece whose working isn’t visibly discernible).

Linked seamlessly to the house in which Jules Louis Audemars and Edward Auguste Piguet set up their manufactory in 1875, the ultra-contemporary museum pavilion is a feat of both design and engineering, the latter overseen by Lüchinger+Meyer of Zurich. Covered with local grass, the structure’s coiling, 104-ton steel roof is supported entirely by curved glass walls — 108 unique panes, to be exact, combining as many as seven layers of structural glass.

A brass mesh runs along the external surface of the building, regulating light and temperature. The grass atop the structure also provides climate control, while absorbing water to boot. A show of respect for its pristine setting, the camouflaging green roof prevents the low-slung complex, which is also robust, from being overbearing. But the building does make its presence known: The fact that it both melds with the meadows it overlooks and evokes a piece of machinery gives the 2,373-square-metre complex a quality of, well, timelessness.

“The Musée Atelier,” says its director, Sebastien Vivas, “was born from a dream: [to] create a living museum capable of transmitting the passion, energy, talent and creativity of the women and men who have been writing Audemars Piguet’s legacy since 1875.”

Inside the facility, that legacy is on display in the form of some 300 timepieces spanning more than 200 years of watchmaking history in the Vallée de Joux. Speckled with stones from the region, the museum’s slanted terrazzo floors fluidly adapt to the natural gradient of the land on which they rest. Following the curve of the glass walls, the museum path meanders clockwise toward the eye of the spiral before unwinding in the opposite direction, shepherding visitors through the building as if they were navigating the spring of a timepiece. 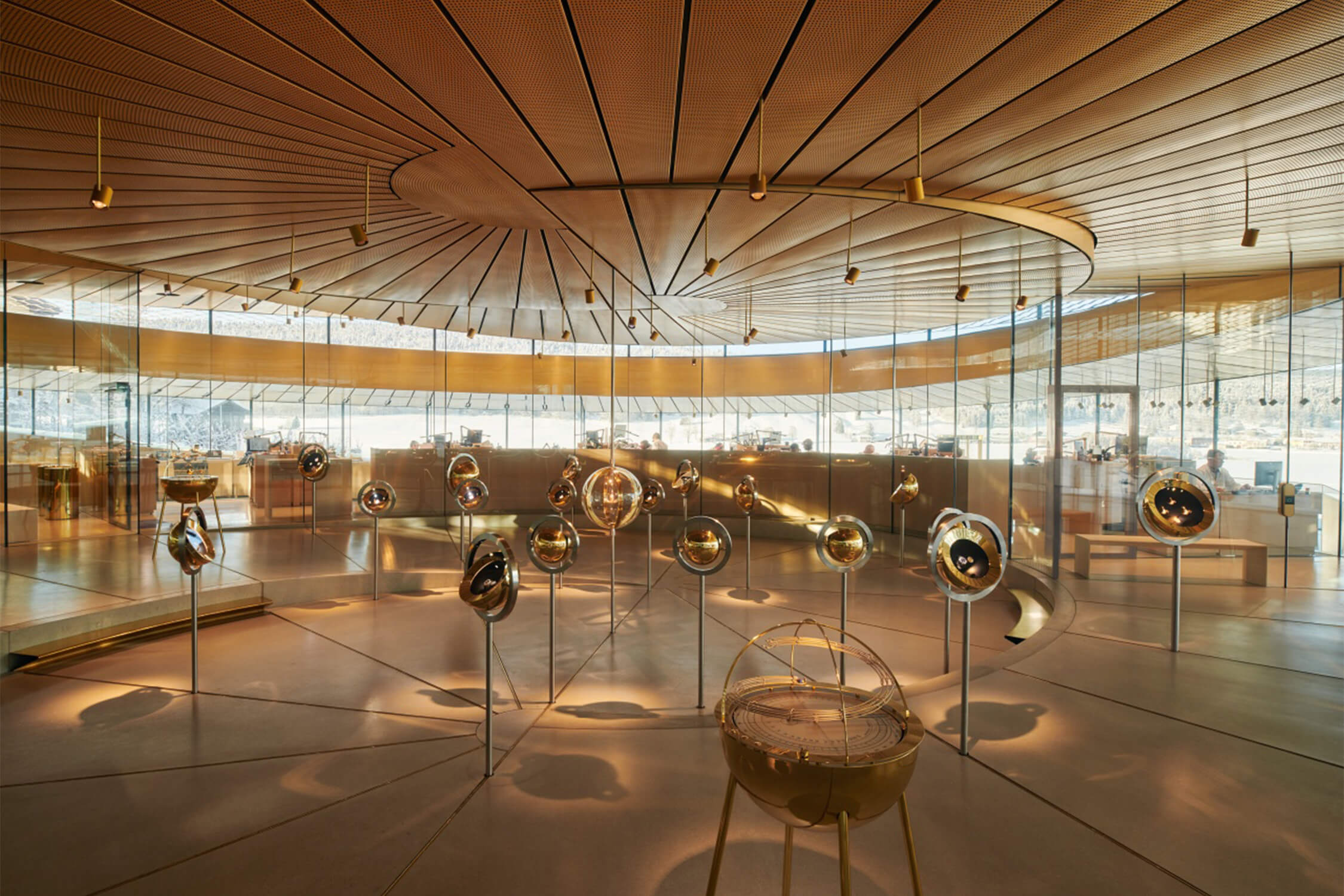 To further enhance their experience, Atelier Brückner, which specializes in creating design narratives, imagined the exhibition of the timepieces as a musical score, giving that fiddlehead allusion yet more meaning. In effect, showcase after showcase of Audemars Piguet masterpieces unfurl “like notes,” offering contemplative moments as well as crescendos. The climax comes at the spiral’s centre, where a cluster of spherical showcases, inspired by the solar system, contain the watchmaker’s Grandes Complications, all of them orbiting 1899’s Universelle, one of the most complex watches crafted by the brand.

“Watchmaking like architecture is the art and science of imbuing metals and minerals with energy, movement, intelligence and measure,” says Bjarke Ingels, BIG’s founder and creative director. If that’s true, the Musée Atelier Audemars Piguet represents the ideal marriage of design team and client, the synergy in this case resulting in a structure and a showpiece that will no doubt resonate with time.

In addition to BIG Ideas and Atelier Brückner, the team included Switzerland’s CCHE, an architecture and design firm based in Lausanne. Zurich’s Müller Illien Landschaftsarchitekten oversaw the landscape design.