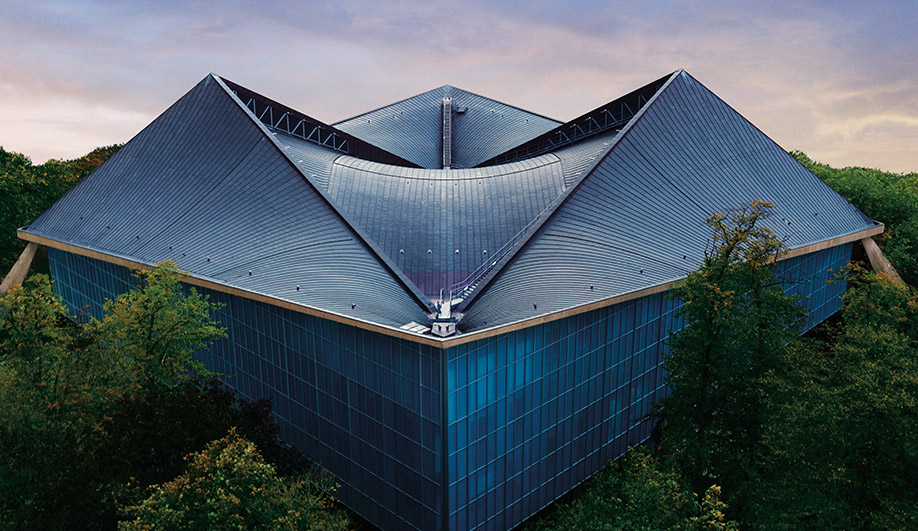 The paraboloid roof of the original 1960s building was kept intact, whereas the exterior walls are wrapped in aquamarine fritted high-performance glazing. 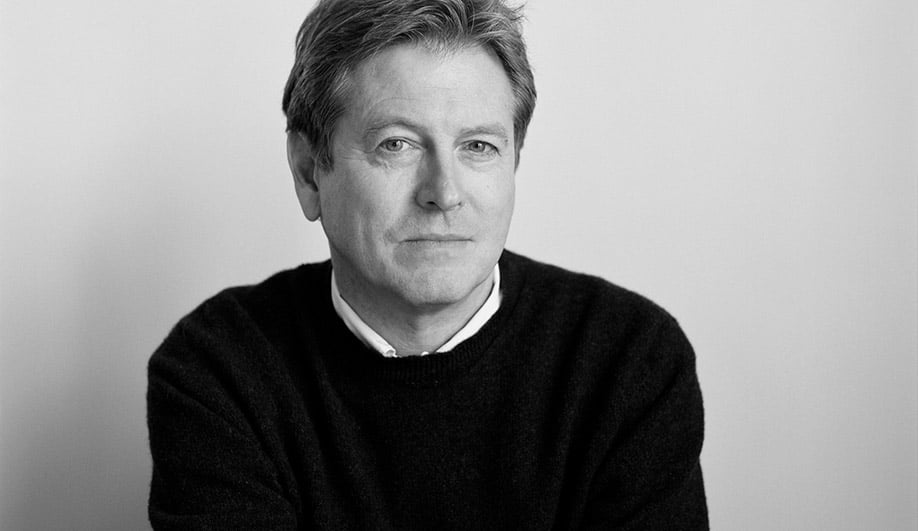 With its interior wrapped in soft oak, the new Design Museum in London is proof John Pawson is still Britain’s guru of “the art of nothing.”

Days before the inauguration of John Pawson’s latest and most significant project, drills shriek and dollies rumble through a dusty atrium laden with slabs of terrazzo. But Pawson, the unruffled minimalist, hasn’t raised his voice above the din. If he’s nervous about the state of London’s new Design Museum – hanging wires, boxed furniture, empty galleries – he won’t be drawn. Pawson’s Old Etonian inflection is as soft as the grey cashmere pullover he wears with simple cotton trousers and Asics sneakers: demure gentleman up top, practical builder below. “There are enough people worrying about it not to get anxious,” he says with characteristic restraint.

The new Design Museum, open since last November, finds its home inside the former Commonwealth Institute, a Grade II* listed building in Kensington. Pawson has applied his monastic approach to the £83-million renovation, transforming 10,000 square metres of exhibition, public and office space with unfettered wood and terrazzo floors, oak and marble walls, and seams of recessed lighting. 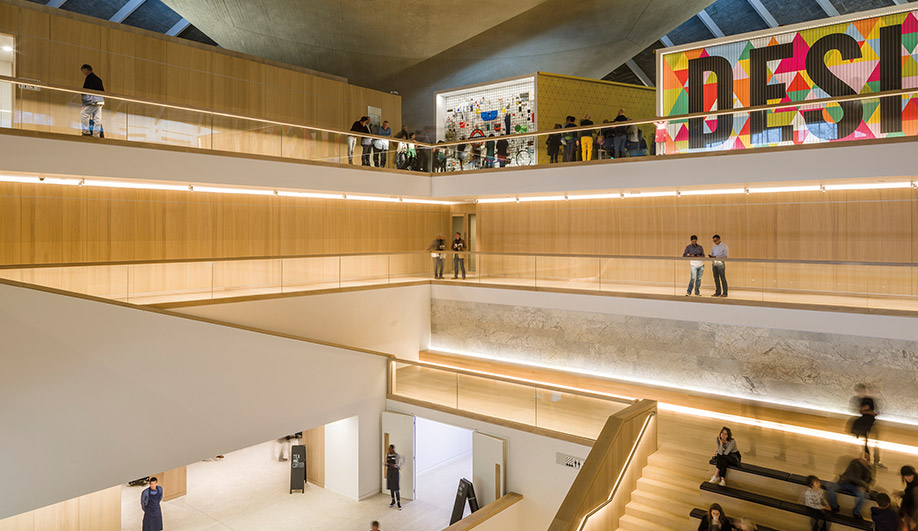 A grand processional route, wrapped in a layer of natural oak, circulates the main atrium and invites visitors to linger between exhibits. The wood gives the space a warmth rarely found in contemporary museums.

The sculpted views and sightlines reach all the way to the extreme pinnacle of the original hyperbolic paraboloid roof. The galleries – in the double-height basement, on the ground floor and up top – are hidden behind half-walls that function like modest boudoir screens. They are also connected by broad staircases, inset in places with leather seating banquettes. The Pawson touch can be seen and felt in such details as integrated wooden handrails that are so satisfyingly wide the builders used them as writing surfaces for taking notes.

From the start, the project was plagued by red tape. An on-site apartment complex constructed by OMA helped finance the master plan; it also ratcheted up the delay by another year. Architects Allies and Morrison removed the original concrete core (a process which took longer than planned), and both OMA and Allies and Morrison sheathed the building in a new glass facade. The year the museum was supposed to open, 2014, Pawson had just begun work on the main interior feature: a yurt-shaped void. 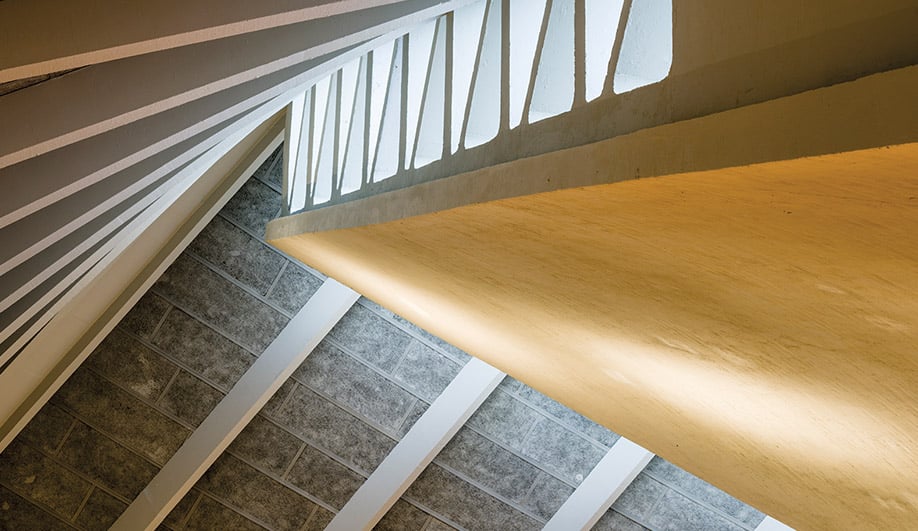 The peaked roof and surrounding skylights create a dramatic focal point in the main entrance.

This is now ancient history. When I enter the museum on opening day on November 24, 2016, I am among hundreds of others gasping in awe of the sweeping central atrium with its peaked roof and skylights. Pawson, too, seems pleased. “There’s this moment you suddenly realize what you’ve got, because of people’s reactions and Terence Conran patting you on the back.” In fact, Conran, founder of the museum’s first incarnation back in the 1980s, is moved to tears. “I’d like to live here,” he says. “Design is about optimism, and that’s what this place is about – clean, fresh, well-lit, friendly and full of surprises. A cathedral to design.”

Since then, the critical reception has run hot and cold, with some wondering why OMA hadn’t been appointed instead to the museum, and Pawson to the residential building. Yet the museum seems the culmination of Pawson’s entire CV and, according to Rowan Moore of The Observer, “the most visited and least exclusive of his works.” It has height and breadth, as well as a gradual stair that invites access. The refined oak provides a layer of warmth rarely found in contemporary museums. In an institution laden with conceptual work, much of it still radical and obscure, this touch is a palate cleanser. Pawson says his loyalty was to the projected 650,000 annual visitors. “It’s not a building for objects. It’s a building for exhibitions about objects and ideas. The point is to make people feel good.”

The designer comes by his unflinching commitment to minimalism honestly. His parents were Methodists, and his mother disliked clutter. “She was happier with less.” Meanwhile, his father, a textile magnate, “liked a club chair, side table and lamp for every person. It was a nightmare.” In school, Pawson cultivated an interest in Donald Judd and Mies van der Rohe, as well as a fascination with Japan, where he travelled throughout his twenties. That experience led to an apprenticeship with Shiro Kuramata, a designer of diaphanous glass furniture for whom even screws were superfluous. Kuramata convinced his protégé to train as an architect. In 1978 Pawson returned to London and, a year later, enrolled in the Architecture Association.

Always the lone wolf, Pawson dropped out of the A.A. without qualifying. He spent the next decade designing sparsely furnished white-on-white apartments with the details zealously concealed. Images of his interior architecture filtered out like gospel, which is how Calvin Klein came to commission Pawson for the Madison Avenue boutique in the 1990s. Pawson responded with gallery-white walls, floating glass shelves and not much else. The New York boutique not only exemplified the Zen decade but spurred a transformation in luxury retail.

Pawson’s next commission came by way of Trappist monks. The Abbey of Our Lady of Nový Dvůr, completed in 2004 in the Czech Republic, is arranged around a central courtyard. Pawson master-planned the restoration of the manor and gave the interior his characteristic whiteness, in this case using polished-concrete and plaster walls bathed in natural light. This was his first project with public access; the Design Museum is the second.

These days, Pawson tends to make clients from friends and friends from clients. He has work-play relationships with hoteliers Aby Rosen and Ian Schrager, though the prevailing perception is that he remains an outsider. “I certainly haven’t done the career path,” he says. “But even when I was doing an office or extension, I always thought of myself as an architect, because that’s what architects do. But most architects want to be part of a school; they meet on Sundays; they produce manifestos. That never really happened.”

Yet many see a manifesto in his work, so distinct in its style that it has been copied time and again. If the Klein venture cast Pawson as Britain’s guru of “the art of nothing” (in the words of Design Museum director Deyan Sudjic), in 1996, Pawson literally wrote the book on minimalism with Minimum, a visual essay on simplicity. “Pawson-esque” is now shorthand for any interior where a single finish – blond wood, white walls or concrete floors, say – is elevated to maximum effect, and where light and voids are manipulated as space-shaping materials. “When I started, everyone thought I was slightly mad. Then I turn around and other people are doing what I’m doing, and I’m thinking, ‘Wait a minute, that’s what I do.’” In the meantime, the Brit’s reputation for obstinacy and control-freakery has become an architectural stereotype.

Even Pawson’s own house in Notting Hill is a blank slate, with hardware-free cabinetry in the kitchen, clear walls and nothing on the countertops. He insists, though, that he is not a proselytizing monk. “I would like fewer things, but I much prefer a happy marriage to a clutter-free space.” His wife, Catherine, was the reason he entered the Design Museum competition. In fact, Pawson almost didn’t enter because, he says, “I’m a gracious loser, but I hate being rejected.” As well, he is good friends with Sudjic. Yet the board was unanimous in its selection. “Deyan said they wanted an architect who would listen, who they could collaborate with and who was going to be very patient.”

Patient Pawson was. The process of moving the museum has taken a decade. Happily, the building is within walking distance from his Notting Hill home, and he hopes the local community will experience it with similar ease. On the side of the property facing Holland Park, he opened up the site to foot traffic by displacing a copse of plane trees. “What I wanted was to give very easy access.” Accordingly, only the temporary exhibits require tickets. The free upper floors, with windows onto the park, showcase inventions back through the history of design, from Concorde and Memphis to Arts and Crafts. Some objects may eventually spill into the foyer, though naturally Pawson would prefer that they not. The negative space is the thing here, the reason for those audible gasps at the entrance.

“I would never confuse sacred buildings with a museum – it’s a different kettle of fish,” he says. “On the other hand, the monks might come in and say, ‘Gosh, this would make a very good church.’”