The Marvelous Food Market of Rotterdam
Resembling a rainbow, the Markthal by MVRDV is already an icon of the revitalized Dutch city. 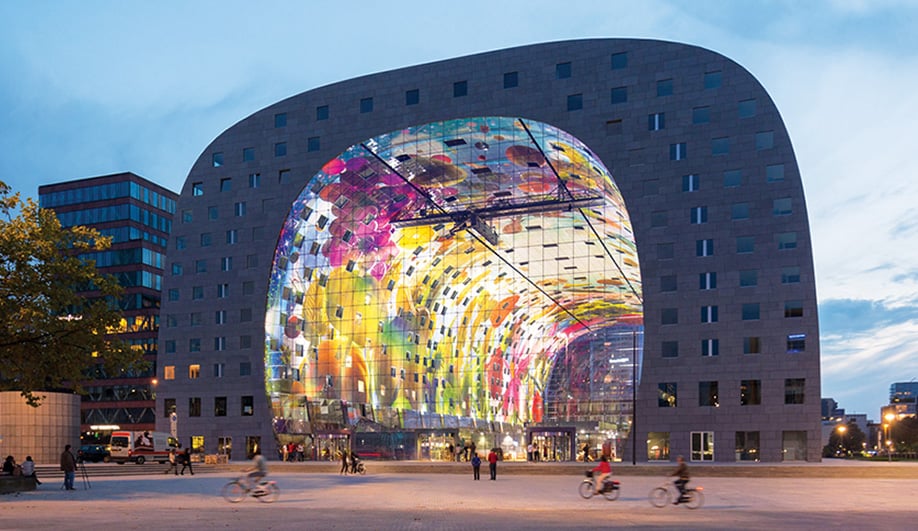 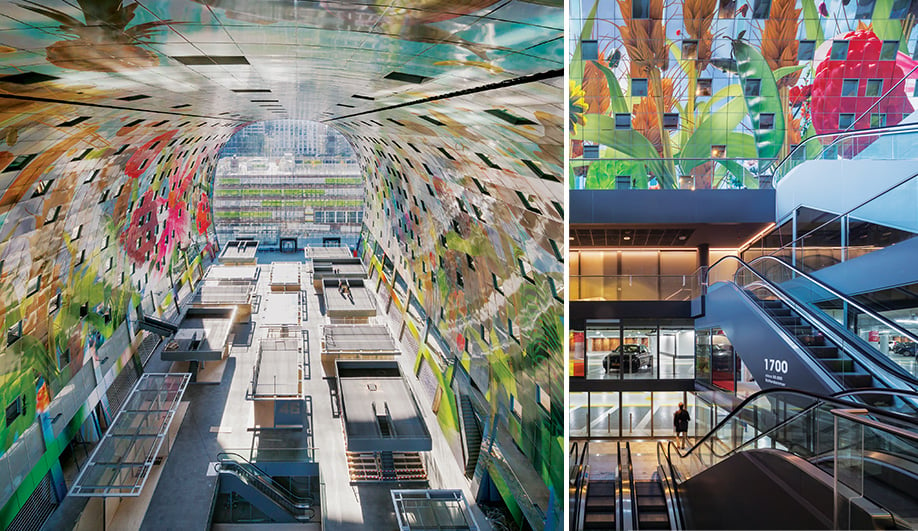 Left: A Pixar-generated mega-mural, which shimmers like the pages of a glossy magazine, conceals sound-absorbing aluminum panels. Right: Below ground level, the hall contains rna super­market and 1,200 parking spaces. 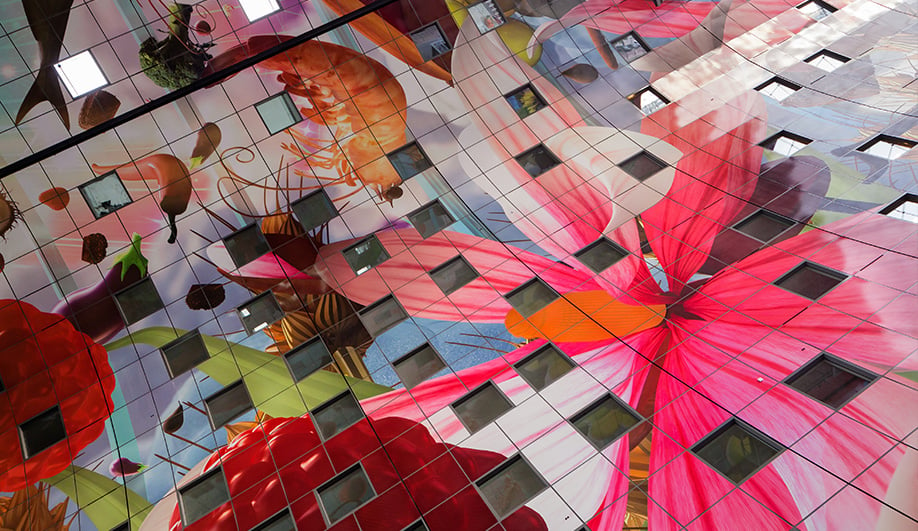 Early in the morning twice a week, in a quiet area of Rotterdam, the Blaak Market comes to life. One hears the clatter of poles and slats as workers assemble stalls and trucks unload their hauls. For nine hours, the market is in full gear with Rotterdammers converging for their dose of herring, Gouda and spare bike parts. When it’s over, the stalls disappear and the vast emptiness returns. But in October, the temporary market gained a permanent home with the opening of Markthal, by Winy Maas of MVRDV, a dramatic arched building with 228 residential units embedded in its structure.

Emptiness has been a lingering problem for the city. After the Second World War, brave and experimental architecture came to fill its bombed streets, but people did not return to the core. Markthal realizes part of a larger strategy intended to lure them back, along with millions of tourists annually – this time with the excitement, variety and convenience of a market.

MVRDV, known for its radical buildings and concepts, won the city-led competition in 2004 with one of its simplest designs. But simplicity is hard, considering such pitfalls as noisy deliveries at the crack of dawn, rodents and the smell of rotting food. A few initial ideas had to be scrapped: apartment windows that opened to the market were replaced with fixed triple glazing; and the openings at either end of the hall are sealed for safety reasons, and to block out winter cold and wind.

Fortunately, the architects opted for a single-glazed cable net facade, the highest of its kind in the Netherlands. The solution maintains lightness and transparency while providing environmental comfort. The more complex features are hidden below, including 1,200 parking spaces, a supermarket and an intricate system for trucks to enter and unload without disturbing anyone’s sleep. A large opening on the ground floor seamlessly brings in light and attracts visitors to these underground spaces.

Walking through the 96 fresh food stalls and restaurants, with the residences hovering above, the building achieves an exciting sort of congestion that screams vibrant public space. With the combination of fantastical mural, the monumental shape and smart design decisions, MVRDV’s latest work exemplifies a new way to solve complicated architectural problems, juggling multiple functions at once while serving as a vital focal point within the city. It’s enough to bring the people back.