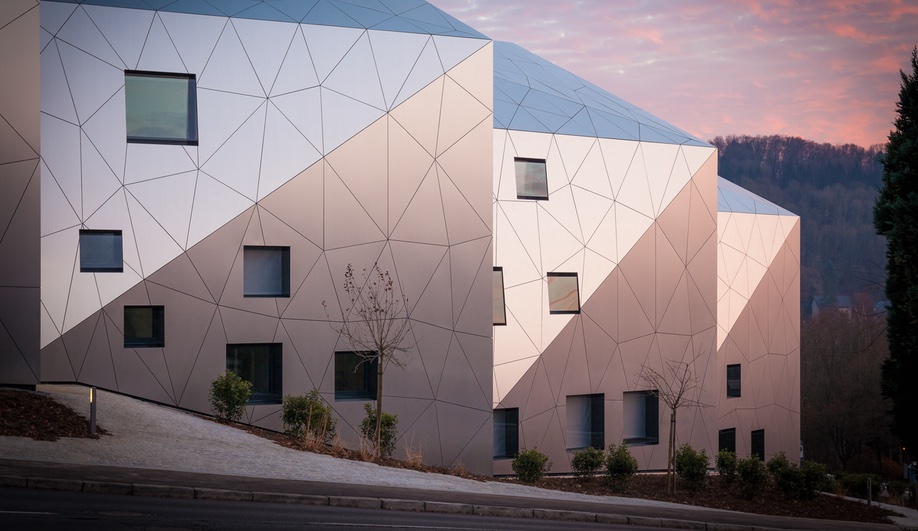 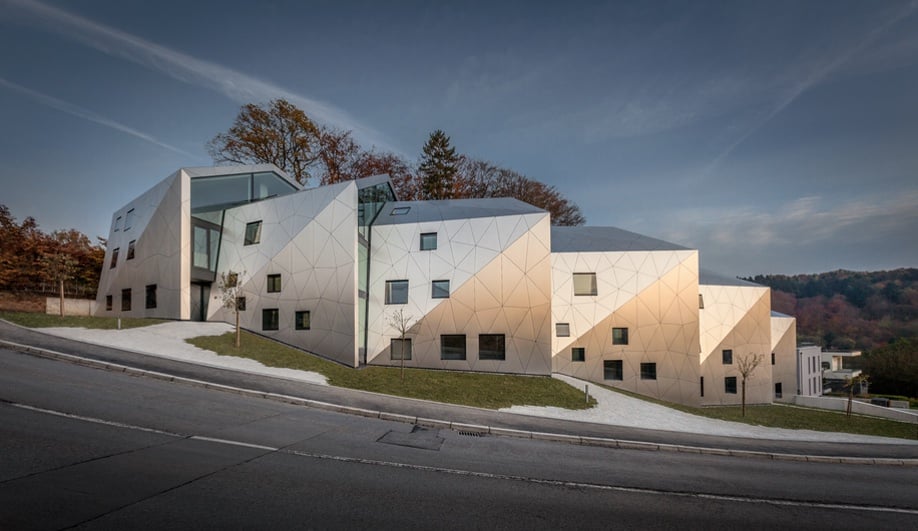 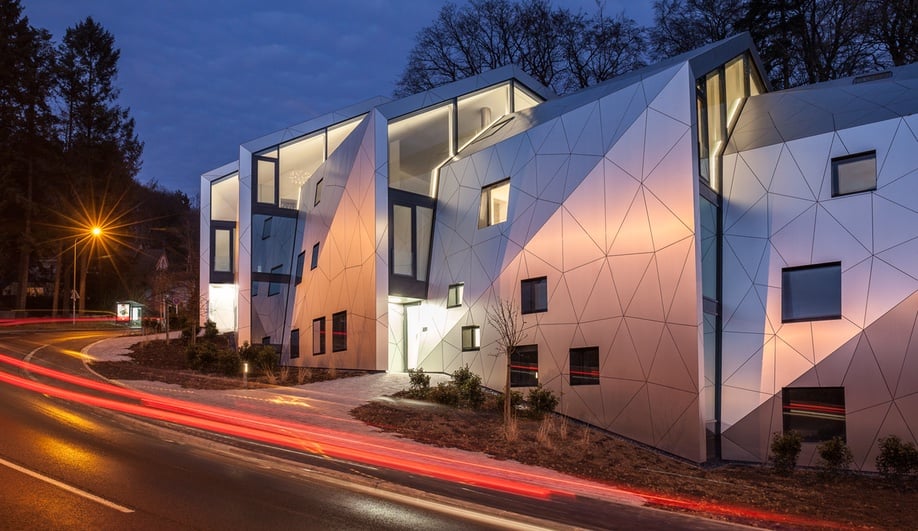 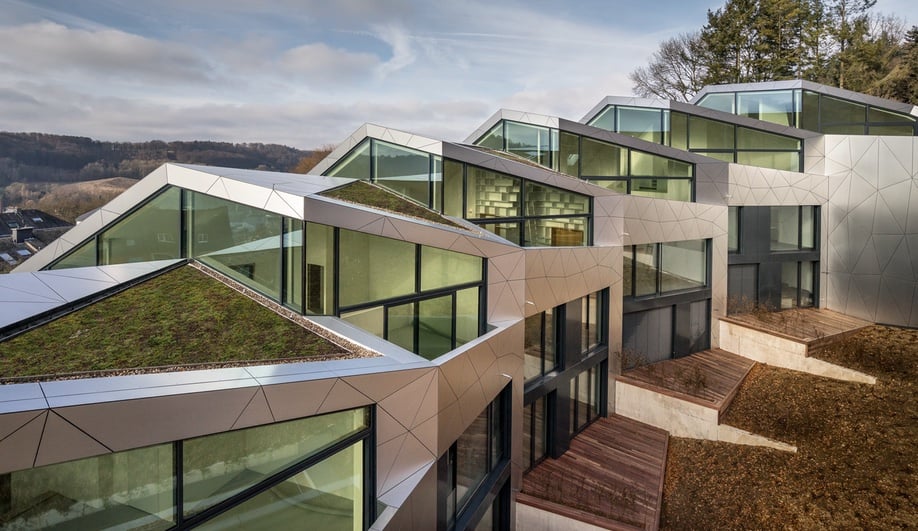 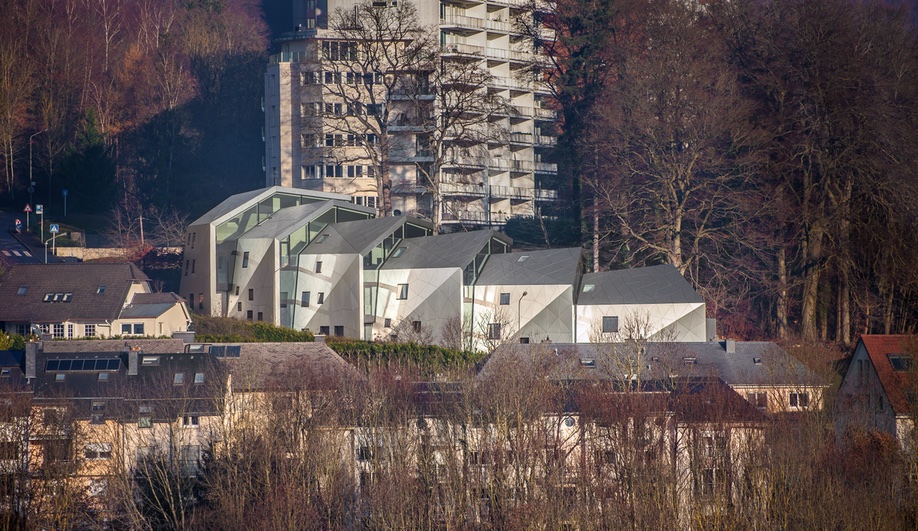 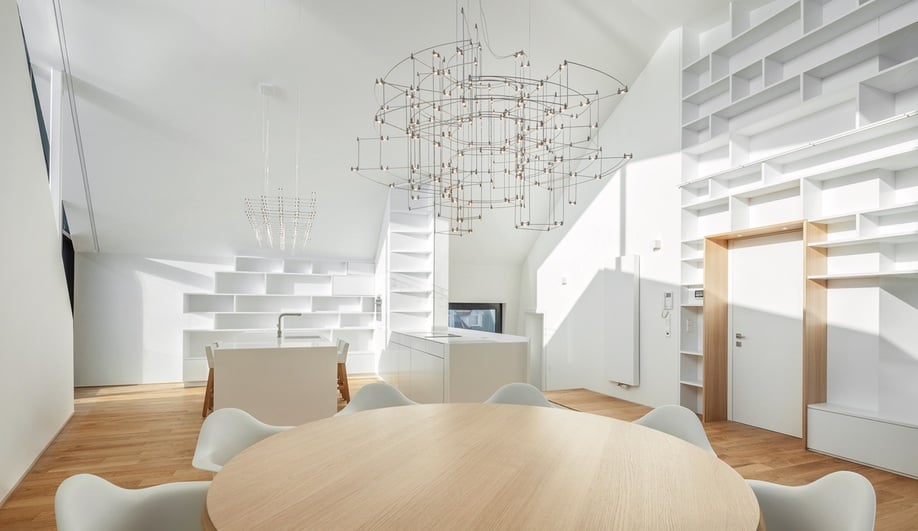 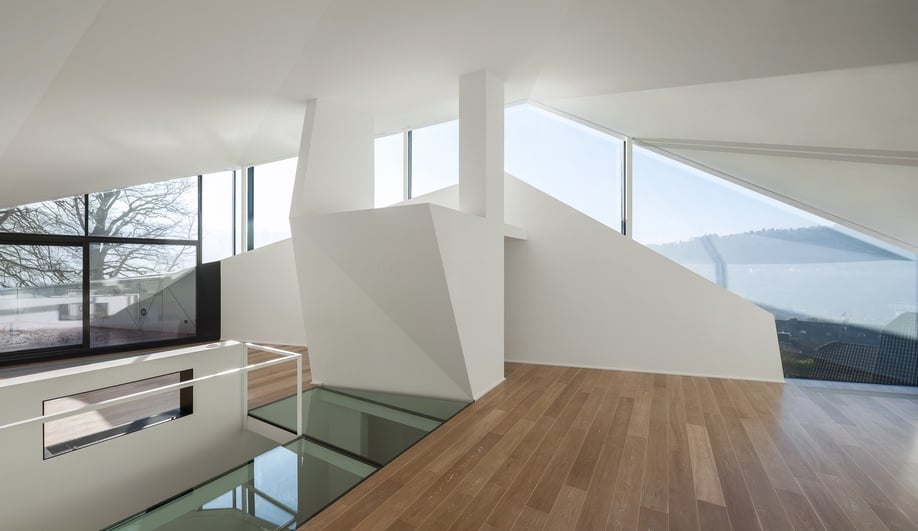 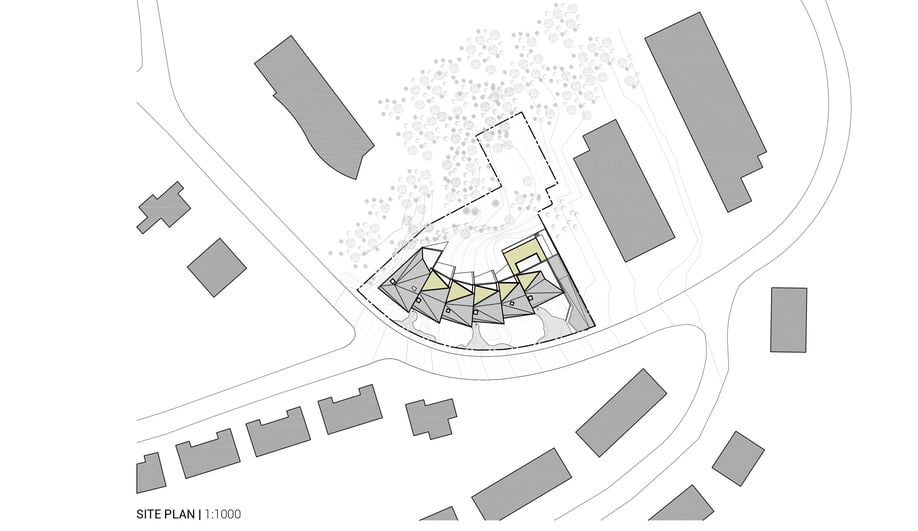 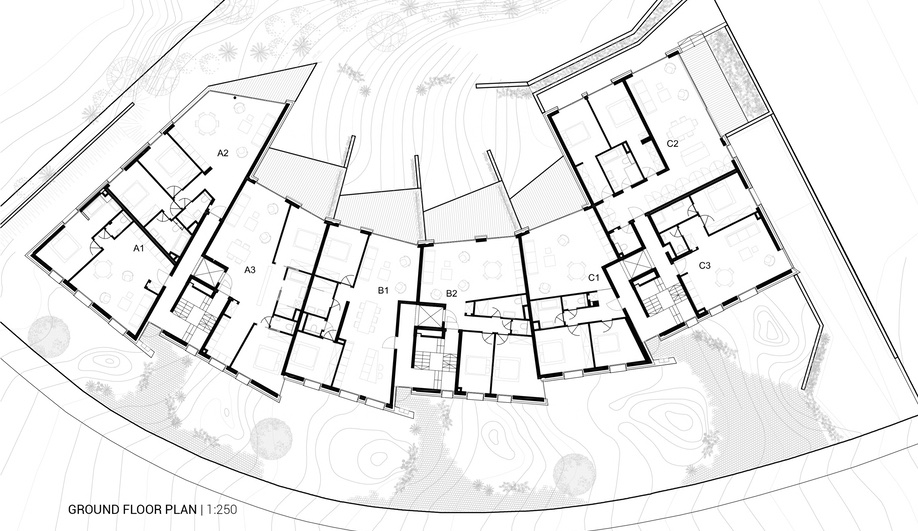 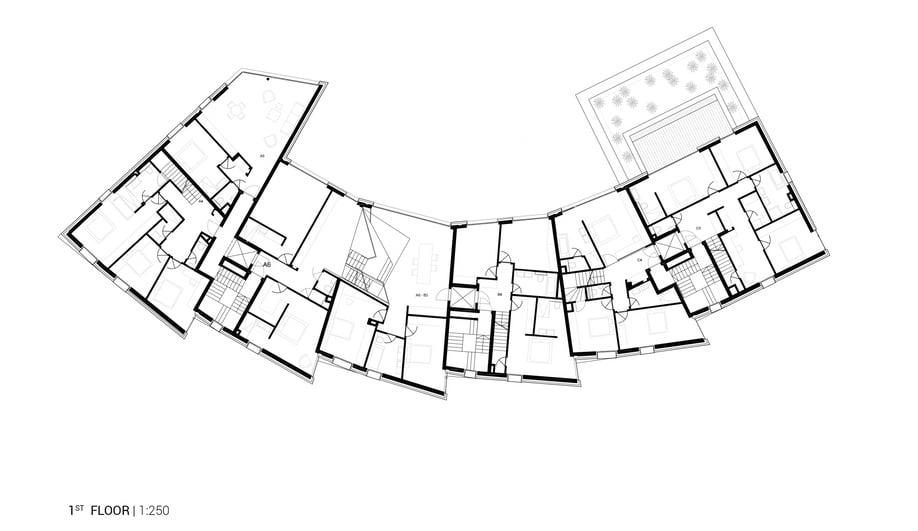 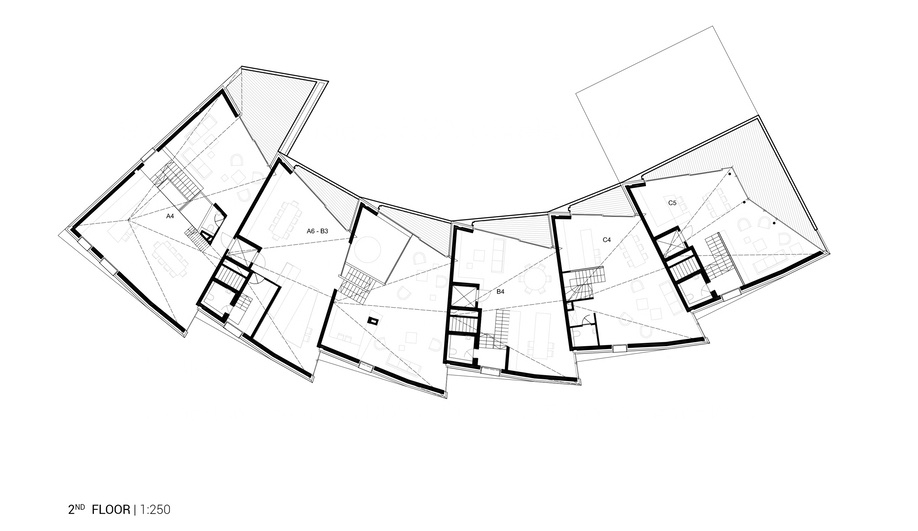 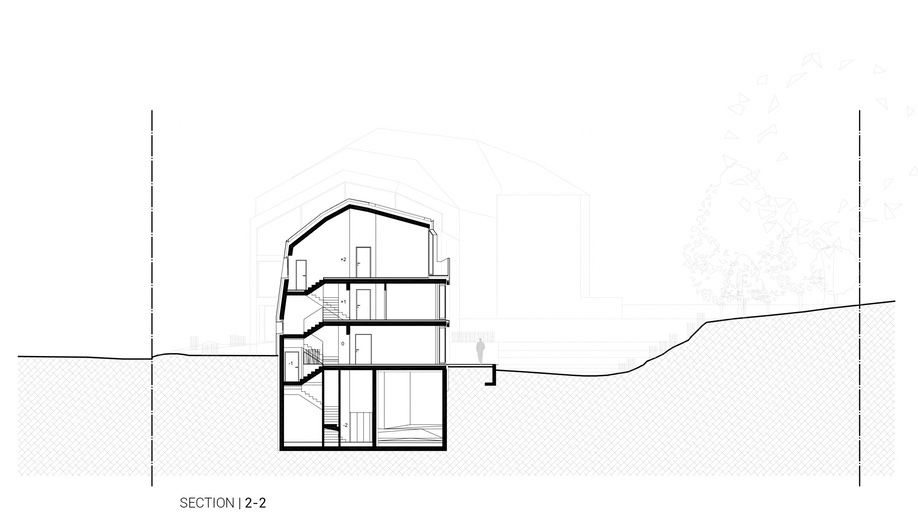 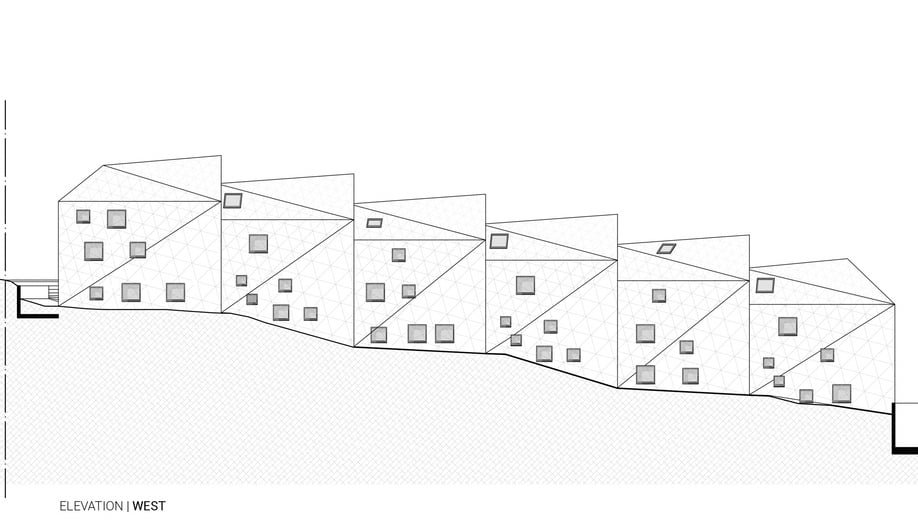 On a residential street in the neighbourhood of Dommeldange, a strip of houses snakes down and around a hill. Because of the steep topography of the site – a 10-metre difference in ground height – Metaform Architects decided to split the volume into six vertically shifted blocks, exposing walls of windows and creating diverse views. Clad in triangular aluminum panels, the complex resembles a shimmering, scaly dragon.

At 2,250 square metres, the 15-unit complex offers a healthy mix of privacy and community: while personal terraces at differentiated heights and angles work to separate the units from one another, a common indoor space featuring a kitchen, leisure room and games space draws everyone together. Three vertical cores connect underground parking directly to the apartments.

The building’s orientation plays a key role in its efforts to conserve energy: its large openings appear mainly on the south and eastern facades, whereas the north facade is mostly closed. A centralized ventilation system, as well as solar panels for hot water production, are included in order to optimize the energy efficiency of the project.

Made of reinforced concrete, the building’s thermal insulation consists of mineral fibre. The openings are filled with three-layered glass in an aluminium frame, and the large glass elements are coated with anti-UV film to prevent the building from overheating. A small collection of 300-year-old beech trees, classified as national monuments, sit on the property.

In dense urban areas, where many apartments amount to little more than life in a box, Metaform Architect’s complex reflects a new typology for collective housing. By ensuring sufficient light, space and visual and acoustic privacy within each unit, they offer something uniquely livable. The project, completed last year, was nominated for a 2016 EU Mies Award.