A Brooklyn Loft Uses Plumbing as an Opportunity, Not an Obstruction
Copper plumbing and a dramatic structural column becomes the focal point in a Brooklyn loft’s transformation by local practise New Affiliates. 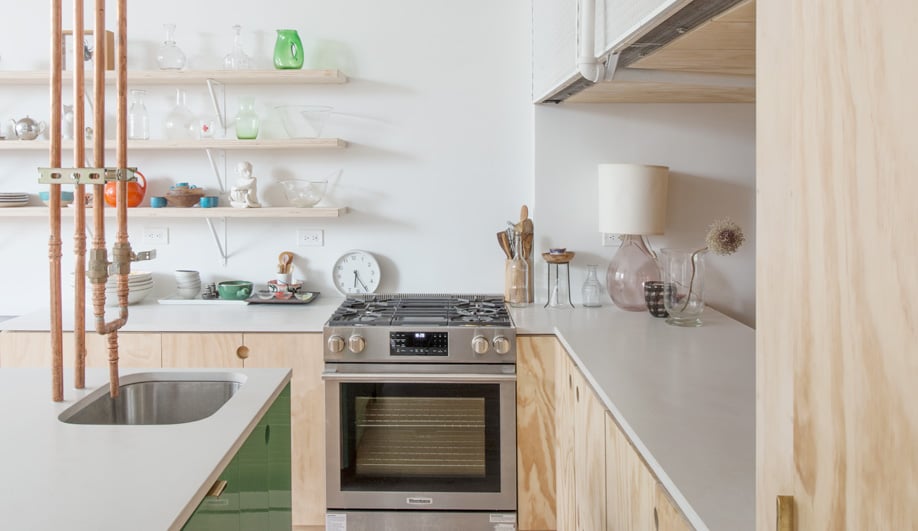 To most urban dwellers, a New York City loft within a former factory is a covetable piece of real estate: Think high ceilings, an open space, character that comes from an industrial, potentially storied past. But in the case of one Brooklyn loft, previous architectural interventions – from sheetrock walls to an awkward crawlspace – resulted in a cramped and dark environment. “Everything was heavy and the ceiling had been dropped by several feet in some places,” says Jaffer Kolb, one half of local practice New Affiliates. Together with partner Ivi Diamantopoulou, he transformed the 70-square-metre space into a bright setting with a unique kitchen at its centre. 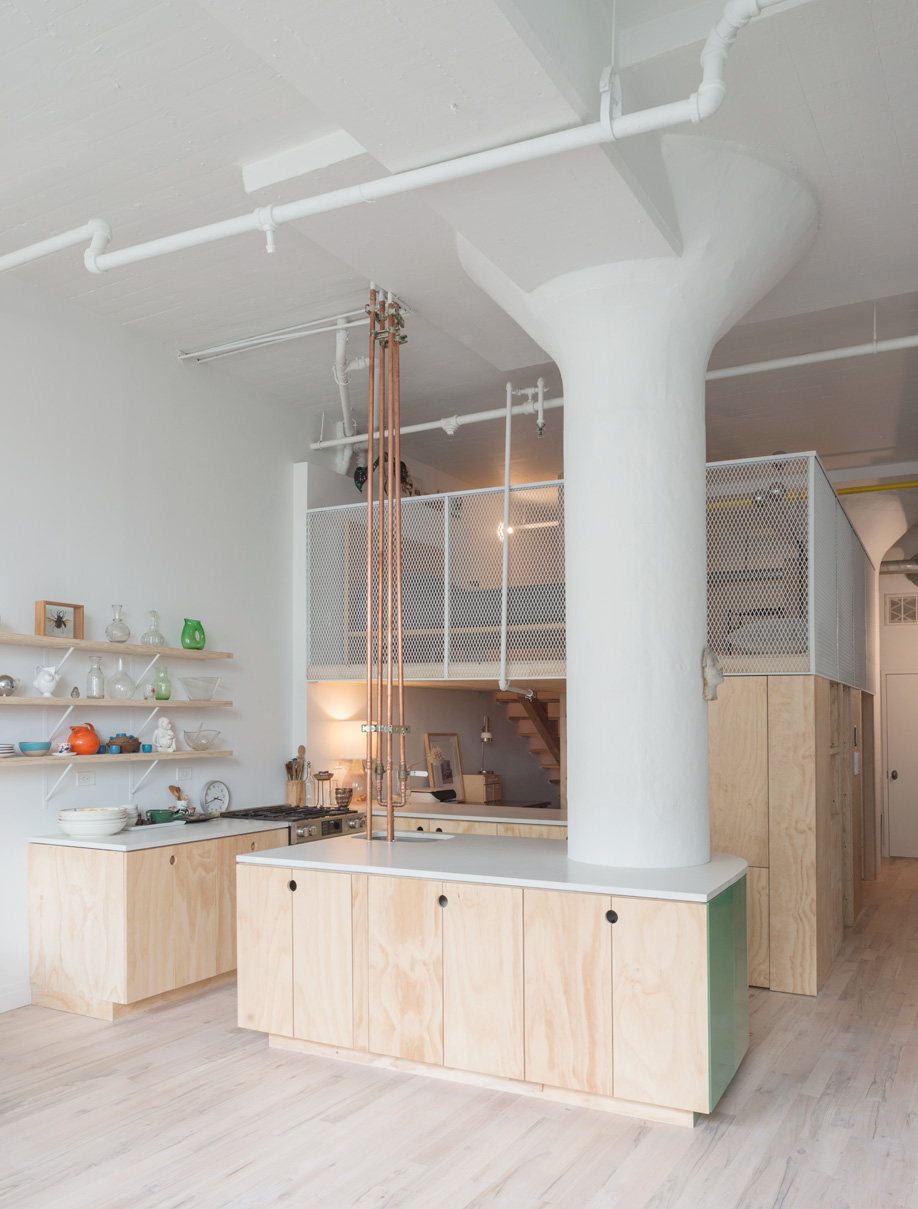 Embracing a dramatic structural column original to the loft accentuated the height of the space.

Since the client, who works in fashion, shared the firm’s philosophy for balancing natural materials with moments of saturated colour, she granted the duo free rein on nearly every detail. Accordingly, the partners stripped the existing kitchen and sleeping area back to the bones (save for two massive structural columns) and developed a palette of simple materials that offer an interplay of roughness and refinement – a trademark of the firm’s work. They specified raw plywood, for instance, to construct a volume comprising a home office, storage and elevated sleeping area screened off with a crisp white metal mesh. 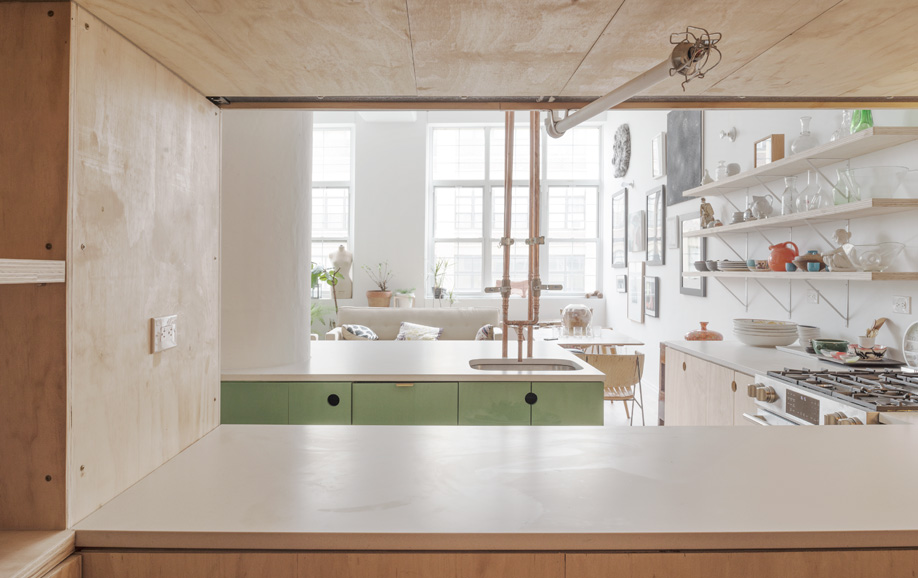 Copper pipes are the centerpiece of the new design. Green lacquer on the island adds a hit of colour.

Open to the living room – and to the only window wall in the loft – the bespoke kitchen backs onto a chasm in the plywood structure. This aperture allows light to penetrate the cube’s core while also forming one leg of an L-shaped kitchen counter, which includes base cabinets and a concrete-toned quartz surface. A plywood island was added to hold the sink and dishwasher and provide extra storage space. Kolb recalls how the old kitchen’s counter nudged up to one of the massive columns. “It highlighted the column as an obstruction rather than an opportunity. We decided to do the opposite and engage it,” says Kolb. Thus, the island’s radiused corner hugs the column, which resembles a tree sprouting from the surface. 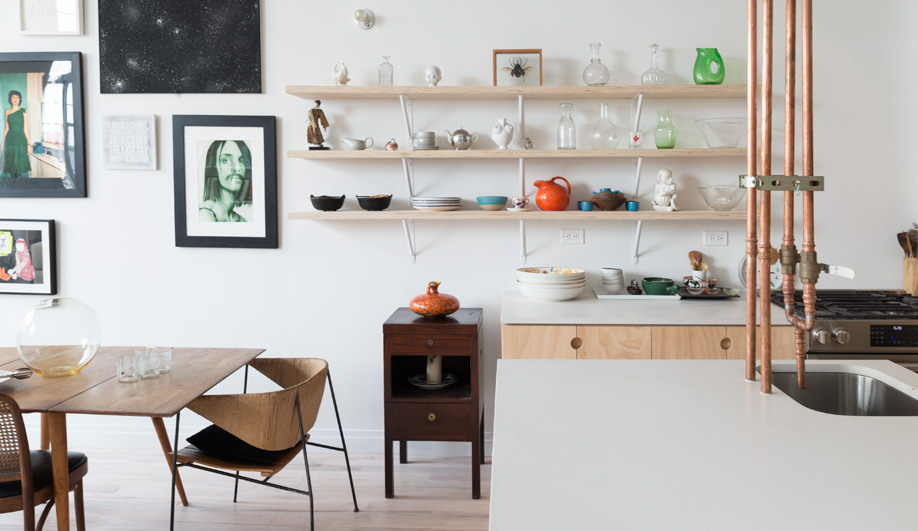 The most attention-grabbing feature is a grouping of four exposed copper pipes that extends three metres from the ceiling to supply water to the island and serve as the faucet. Joined by a U-connection in lieu of a traditional mixer and fitted with industrial valve levers instead of faucet handles, the set up is “a diagram of plumbing somewhat literalized,” explains Kolb. “We wanted it to be an ornamental, decorative gesture – not just a logistical one. It’s a bouquet of pipes.”