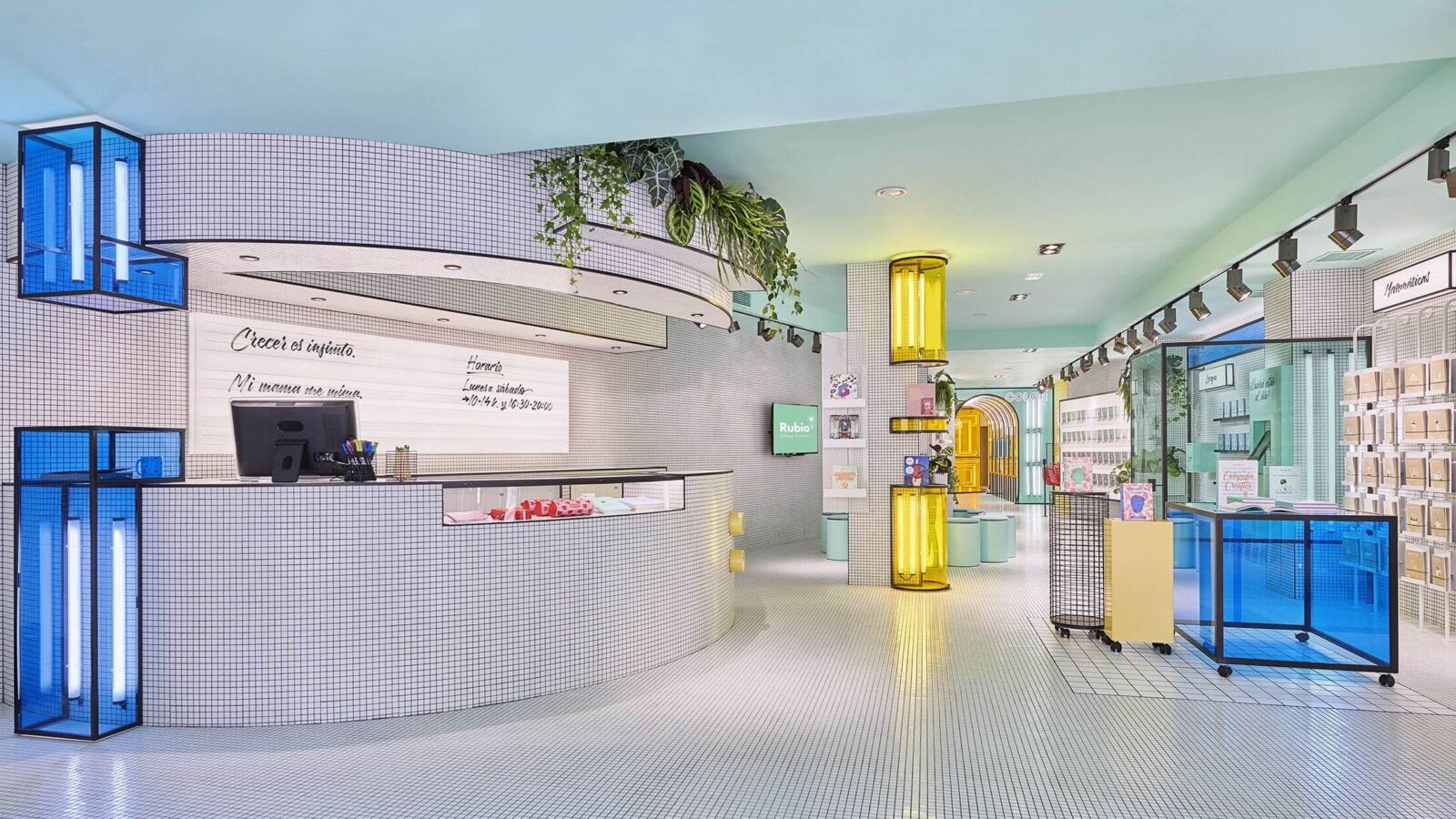 The Bookstore as Funhouse: Neon Signs and Rotating Shelves Mark a New Shop by Spain’s Masquespacio

The demise of the bookstore, stationery shop and literary-supply outlet have been, to paraphrase Mark Twain, greatly exaggerated. Sure, these temples to the written and printed word aren’t nearly as plentiful as they used to be, but those that still exist are generally well patronized and those being newly constructed – especially in China – have been nothing short of spectacular.

The inaugural retail outlet for Cuadernos Rubio, a 60-year-old publisher specializing in exercise books for learning math, language and calligraphy, is a case in point. Designed by Spanish studio Masquespacio, the 200-square-metre store in the heart of Valencia, home base for both Rubio and the design firm, is decidedly exuberant, its funhouse aesthetic aimed at drawing in and engaging with kids and adults alike through the use of vivid colour, vibrant neon signage, interactive elements and a recreational vibe. 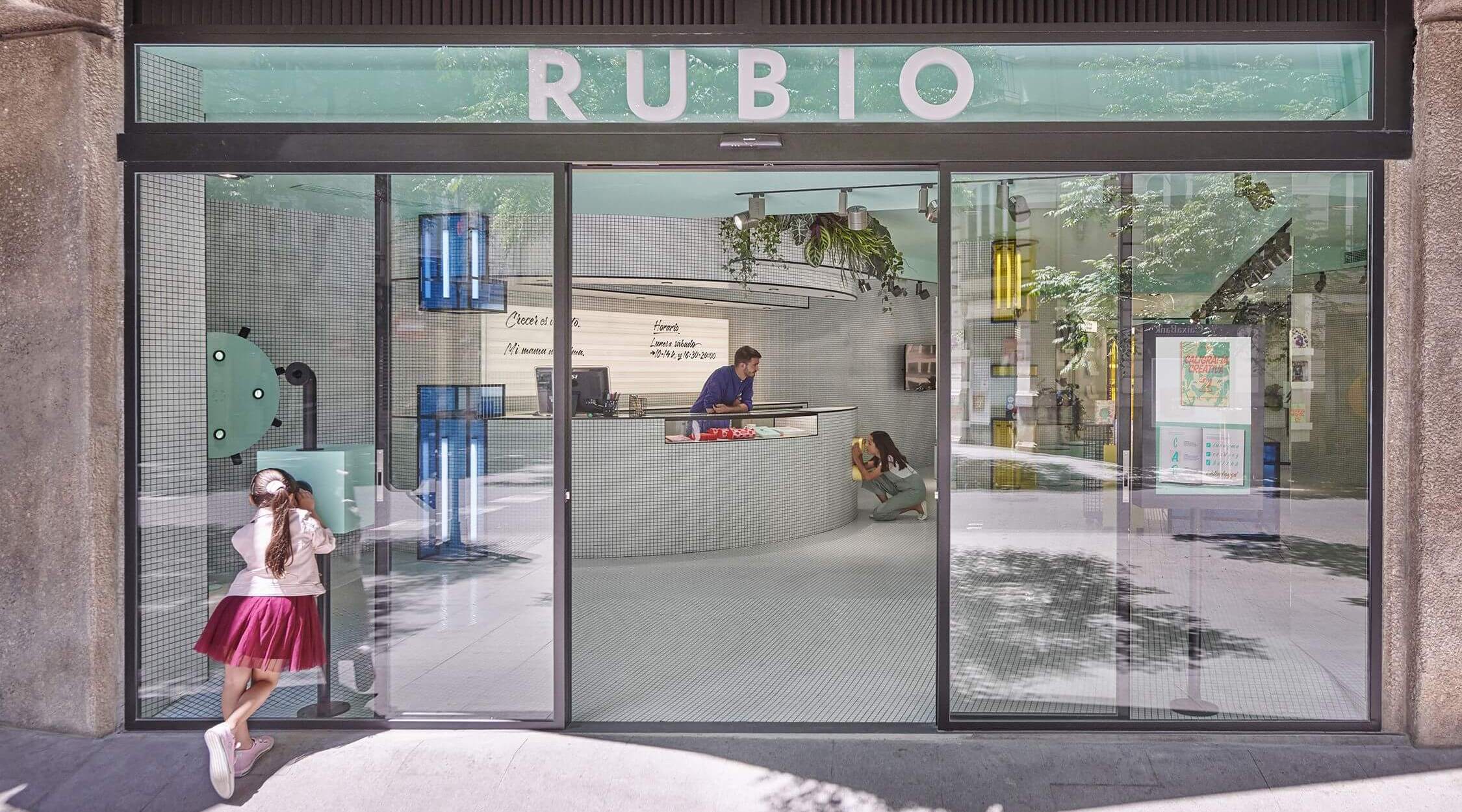 The kind of experience a customer will have is signalled at the entrance, which features an outdoor peephole. Inside, a large reception counter framed by blue and yellow neon signs curves into the store, directing visitors toward the display and workshop area. Like the walls and floors, the counter sports mosaic tiles forming a graphic grid pattern like that typically found on sheets of notebook paper. 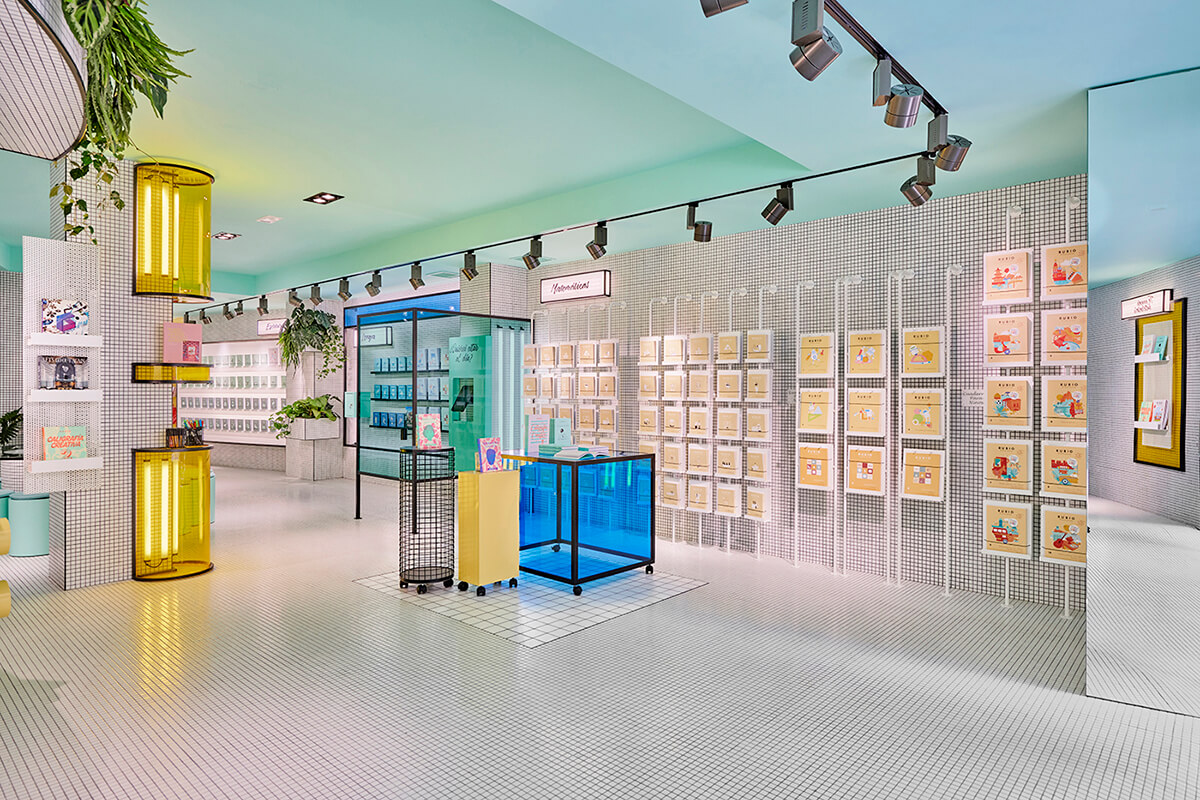 In the workbook display zone, each of the publisher’s collections has its own corner, where hands-on interaction is encouraged and facilitated. In the mathematics area, the backs of rotating shelves double as blackboards for working out math concepts. The nearby language zone has a methacrylate board that visitors can use to improve their handwriting. 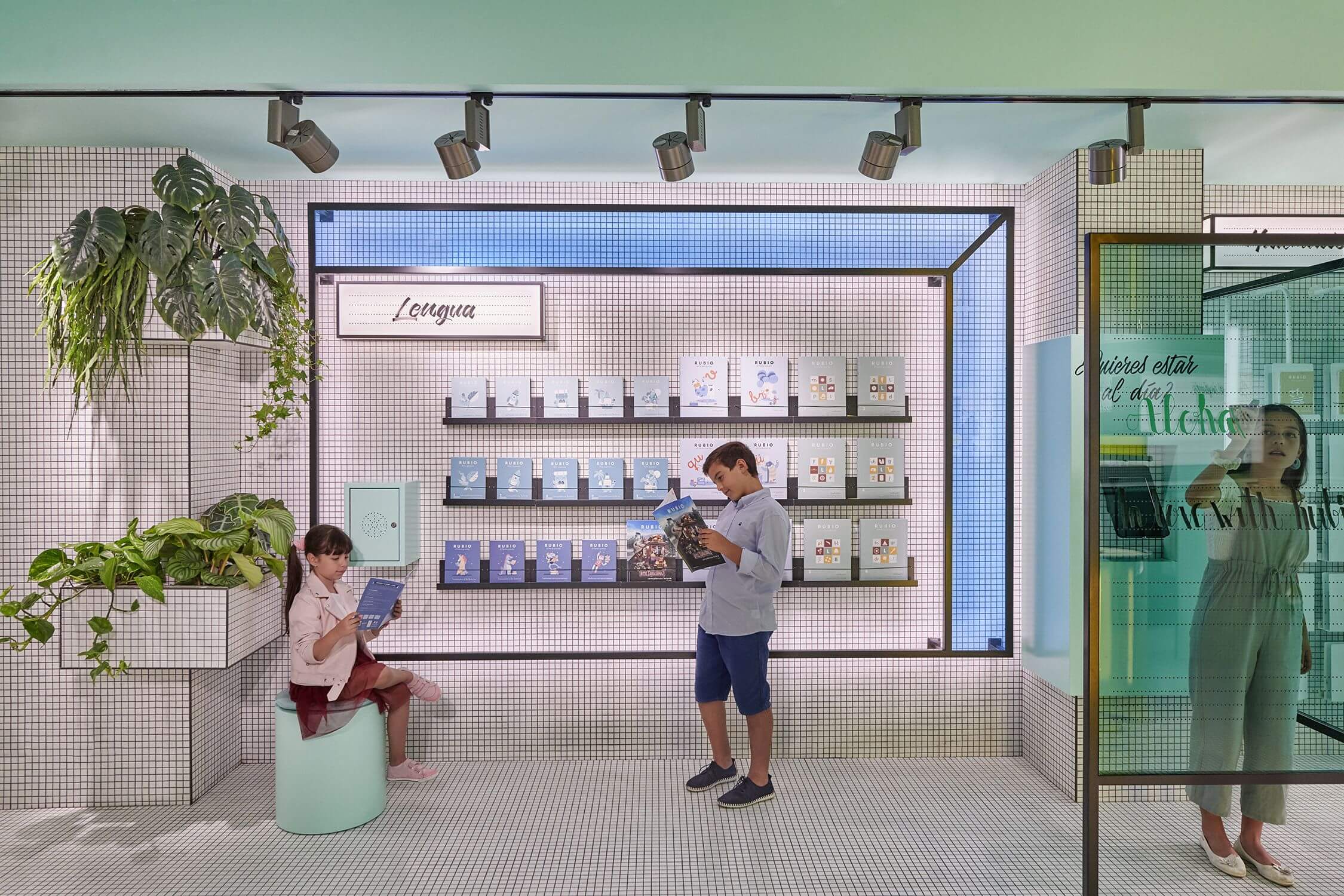 Further into the shop, a so-called “tunnel of colour” leads to a brightly illuminated booth equipped with 3D goggles. This promotional and informational “time machine” guides visitors through Rubio’s half-century history and current universe. 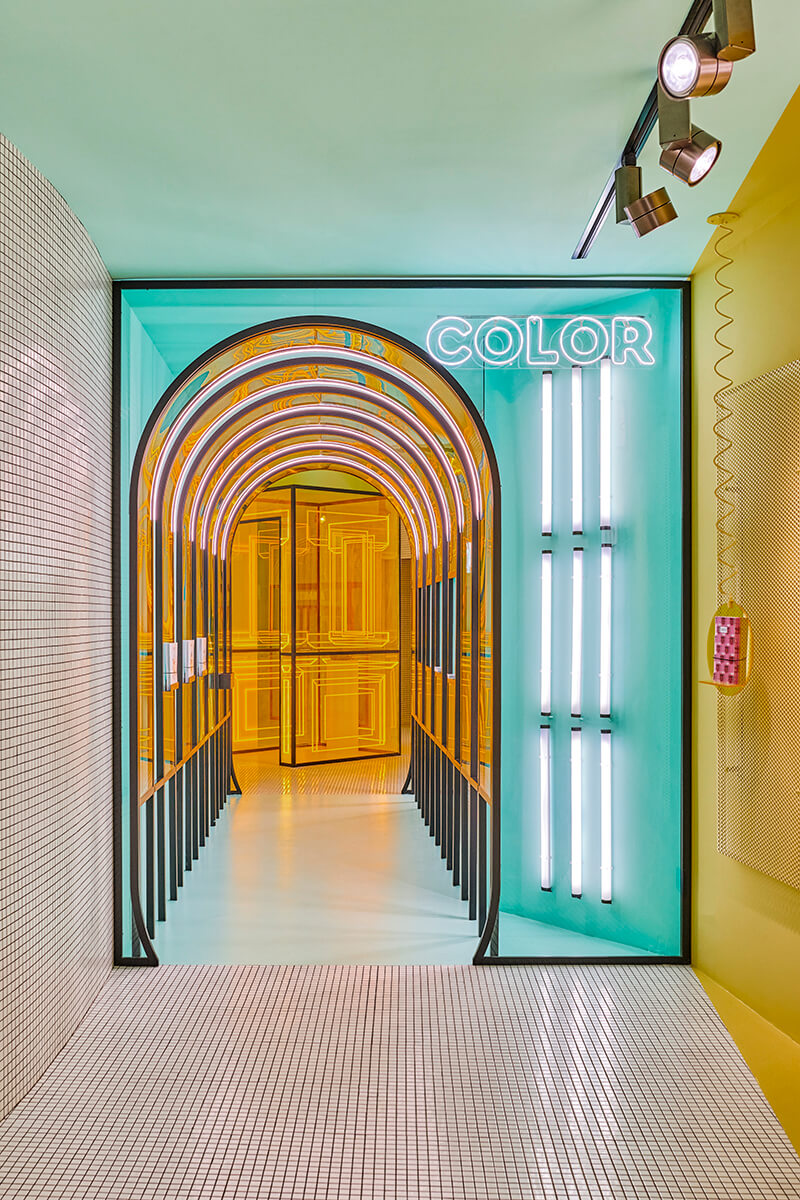 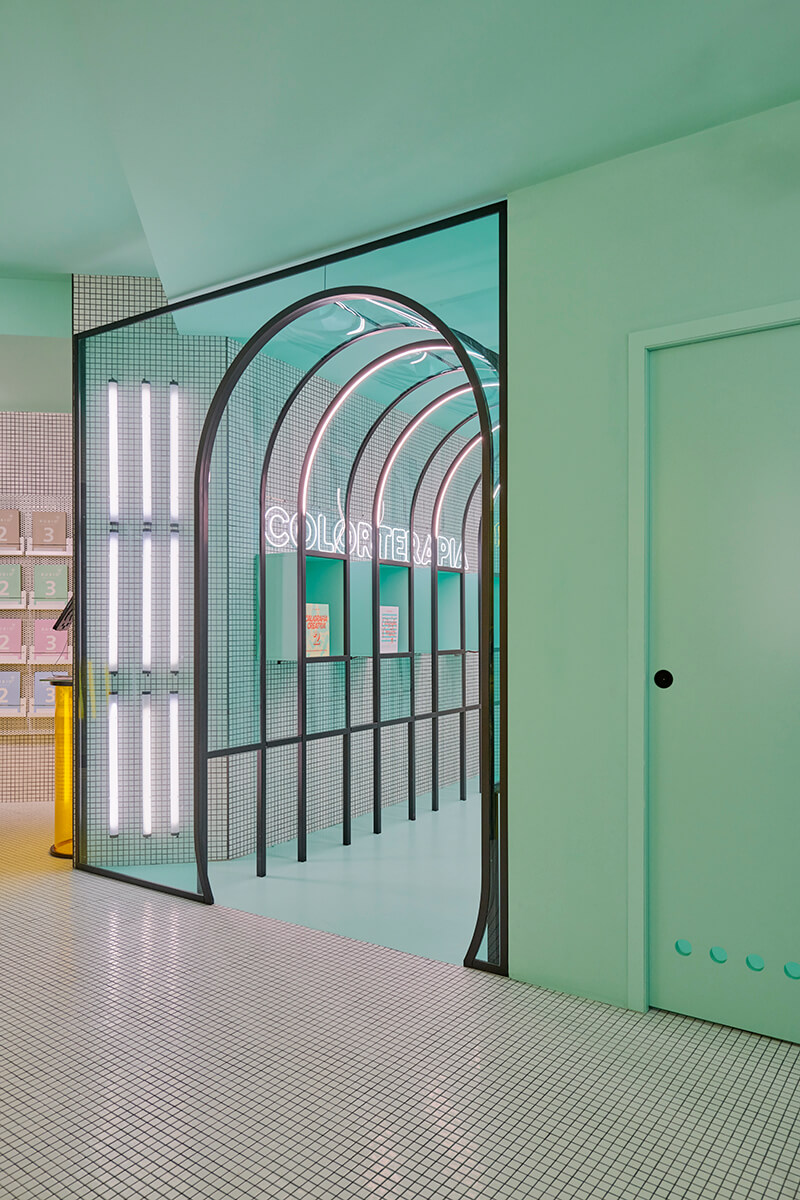 From here, says Masquespacio, which was founded in 2010 by Ana Milena Hernández Palacios and Christophe Penasse, “the more adventurous can go on to the projection room,” a curtained-off kids’ zone “full of surprises for younger visitors.” 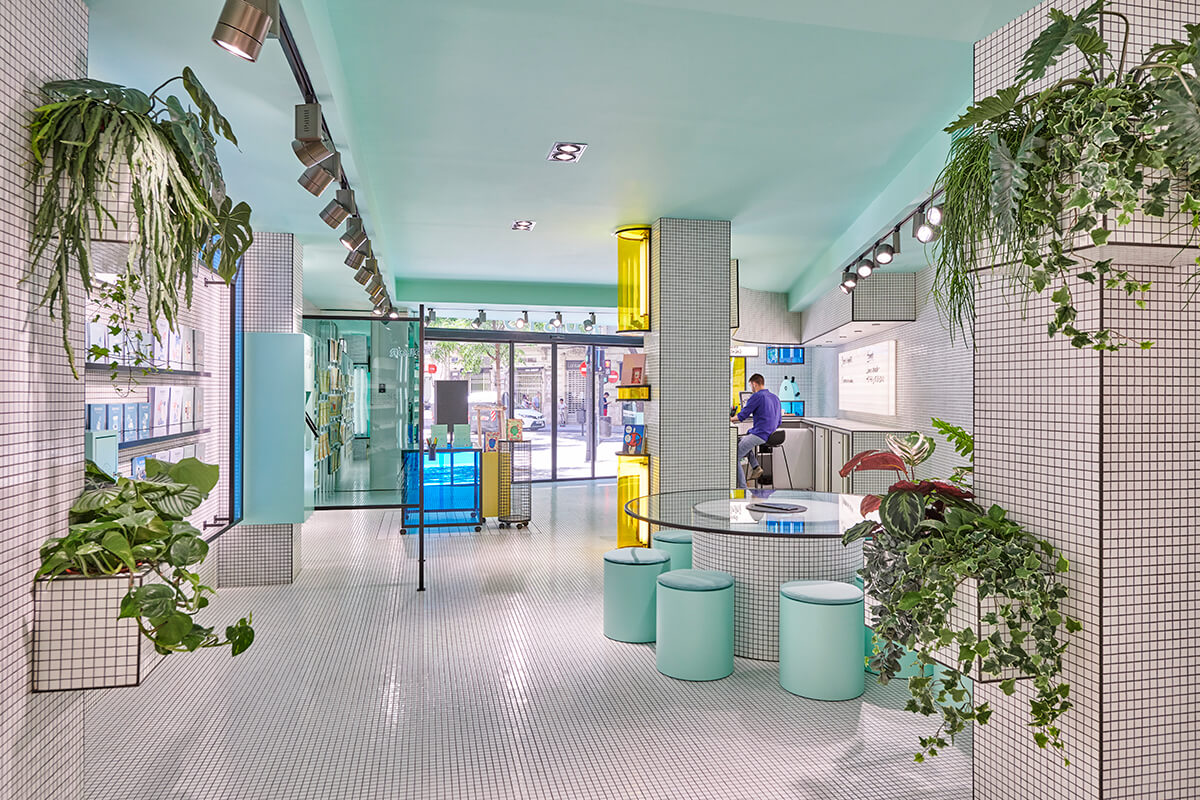 Overall, say the designers, the store embodies a 21st-century approach to both publishing and retail, melding analog and digital elements in as fresh a way as possible, with interactivity as the main goal. “There are numerous spaces and activities to discover in this new space,” they note. “The idea is to create an unforgettable experience for youngsters as well as adults.”