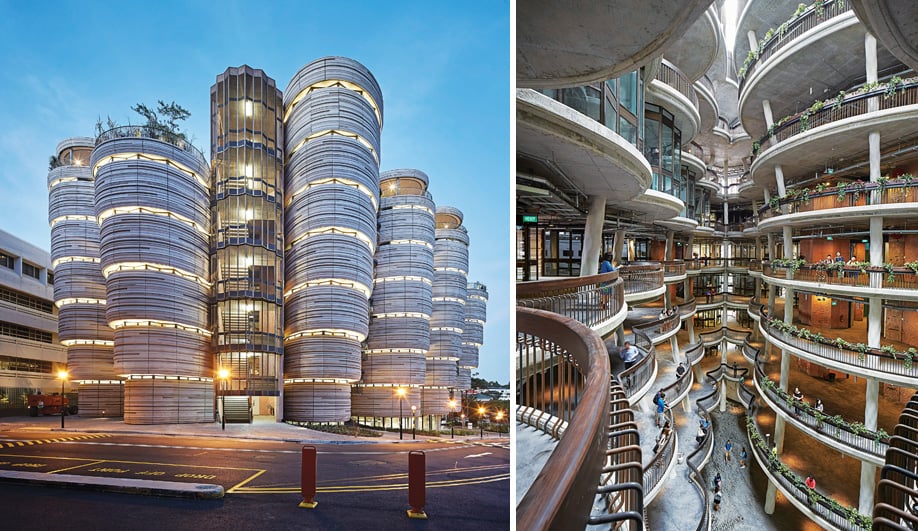 Left: Ribbed concrete clads the 12 stacks of classrooms, nwhile the stairwell is enclosed in permeable mesh. Right: Classrooms are organized around a light-filled central atrium that uses convection to cool the entire building. 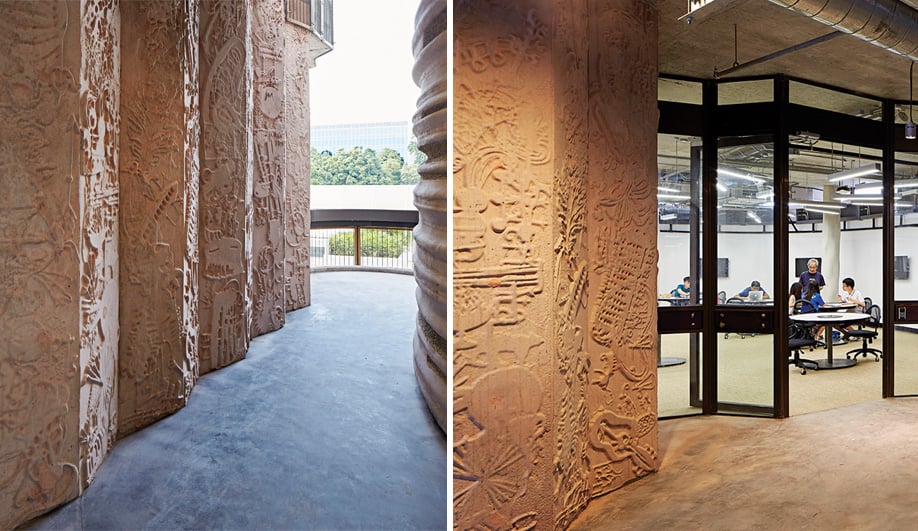 Reliefs on the interior walls were inspired by academic disciplines, including art, literature and science.

Thomas Heatherwick is a problem solver: every project begins with a question. That approach allowed the English designer to rethink such icons as the New Bus for London and the Olympic Cauldron. When his London studio received a commission from Nanyang Technological University to help upgrade its Singapore campus, he asked, “Can a building change the way we learn?”

His answer was the Learning Hub, 12 eight-storey stacks of rounded tutorial rooms that taper outward as they ascend, girding a glass-covered void. Each room is enclosed in ribbed concrete, and opens through folded glass panels onto a wide gallery that encircles the atrium. The 56 shared learning spaces replace the conventional box of closed classrooms opening off a main corridor.

The faculty contributed key elements of the program: rooms without corners allow tutors to move from one group to another rather than lecture from the front, and the building is open to the 33,000 students 24 hours a day. As Heatherwick observes, “You could stay at home in bed and get a Ph.D. with your digital devices. The role of a university building is to bring people together in spaces where you might meet your future business partner or someone to develop an incredible idea with.”

Heatherwick Studios collaborated with lead architect CPG Consultants, a local firm, to design a reinforced concrete building that could be constructed on a tight budget, within stringent building codes, and achieve a high level of sustainability. In the hot, steamy climate of Singapore, most buildings are air-conditioned. Here, the central space is naturally ventilated, and each tutorial room is cooled using silent convection. As a result, the Learning Hub has won a BCA Green Mark Platinum Award, the country’s highest environmental honour.

To make the facility welcoming, Heatherwick decided to give the concrete “love.” He specified a warm tone, and reusable silicone moulds that would give every surface a three-dimensional texture, within the maximum allowable depth of 25 millimetres (any deeper, and the reliefs would encroach on the steel reinforcement). The curved concrete panels that clad the exterior are ribbed in subtly different patterns, and the aggregate is exposed. The 66 structural columns have gently undulating surfaces that capture the play of light and shadow; Heatherwick likens them to a human belly. Artist Sara Fanelli made 700 ink drawings inspired by art, science and literature, which were translated into reliefs that line the stair and elevator cores.

The Learning Hub is raw but tactile, engaging the senses of sight and touch. It’s as far from the crude finishes of Britain’s new brutalism (which gave exposed concrete a bad name) as it is from the sleek new towers that proliferate in this orderly and prosperous enclave – the Switzerland of Asia.