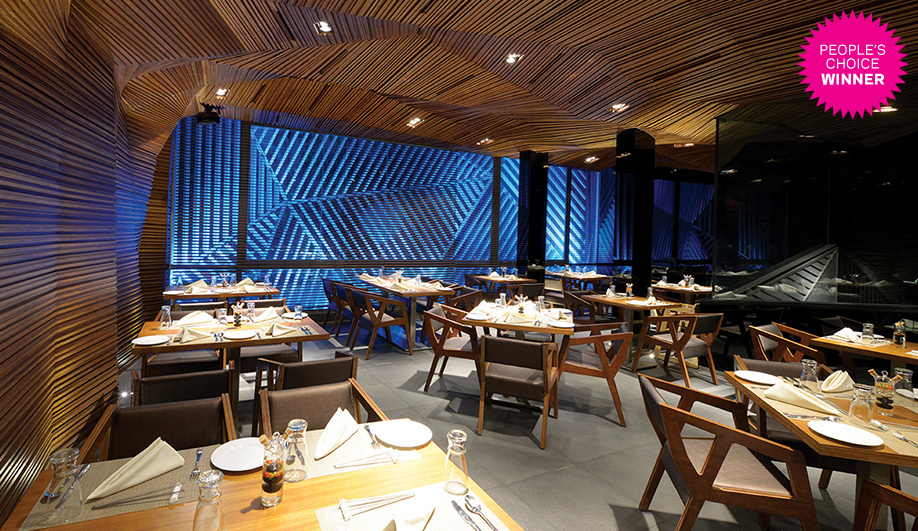 Like dancing inside a work of origami, the nightlife experience at Auriga is enhanced by faceted walls, and pillars covered in recycled galvanized iron. Backlit by coloured LEDs, the folded-paper effect becomes electric at dusk. Patrons can also head upstairs to the restaurant, a more subdued affair with a sloping ceiling of recycled plywood strips fashioned into a mille feuille topography. To create this enticingly cavernous hot spot, local firm Sanjay Puri transformed an old two-storey warehouse, removing the exterior wall to craft an aluminum facade whose frenetic geometry hints at what’s inside. ­sanjaypuriarchitects.­com

This intimate cocktail bar in the fashionable Munich neighbourhood of Glockenbach places its mix-ol-o-gists front and centre. Framed by -amphitheatre-style bench seating on either side of the central bar and accessed by folding doors that connect the interior to the sidewalk, Gamsei evokes the open, communal spirit of a Bavarian beer hall. Crafted in natural oil-finished oak, the interior emphasizes a grid-like aesthetic, where the vertical slats of the cup-board doors are complemented by a meticulous horizontal arrangement of white ceramic bottles on shelves. The boldest move: a grid of black steel mesh above the bar that suspends an array of the same handsome bottles filled with house-made liquors and syrups. buero‑wagner.com