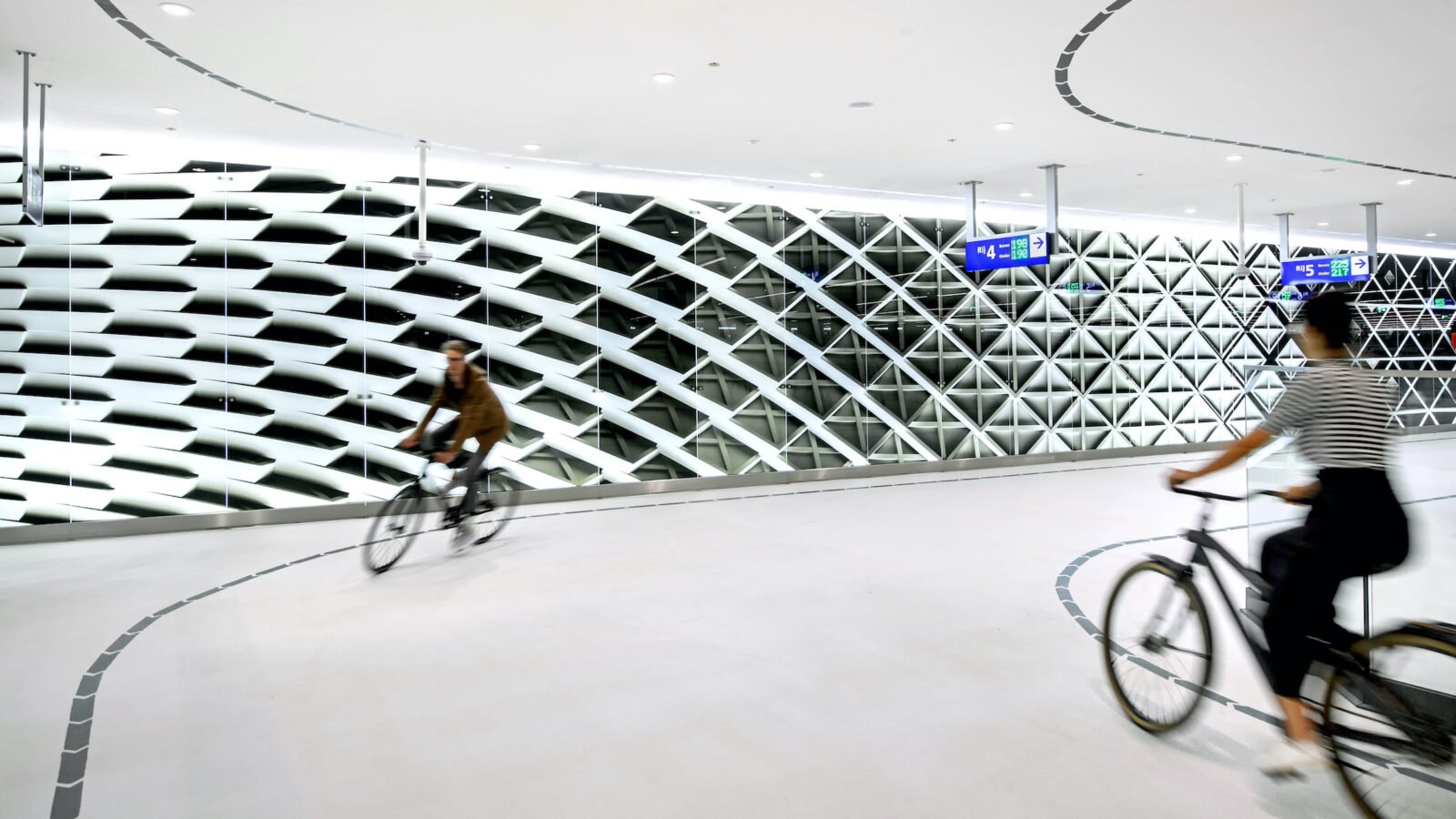 A Dutch Bike Garage Celebrates the Joys of Urban Cycling

In The Hague, Silo and Studio Marsman introduce bold graphics and a museum-like ambience to a subterranean parking complex.

The Hague has a new central station. But, that’s not all. Alongside the commanding presence of the Dutch city’s 1973 railway terminal, a more modestly scaled bicycle parking facility now rounds out a multi-modal regional transit hub — all with an invigorating dose of architectural panache.

Designed by local creative agency Silo and Delft-based architects Studio Marsman, the sprawling underground complex was inserted beneath a future development site near the railway station, with the entrances set to be incorporated into an upcoming mixed-use complex.

Yet, it’s far more than just infrastructure. While an underground garage is seldom a locus for expressive architecture and bold placemaking, the designers developed a space that “transforms parking your bike into a museum-like experience.”

It may be underground, but the ambiance is airy and light. Against a spare white palette, high ceilings and bright lighting foster an energetic and open space. Generously proportioned aisles (featuring smart directional markings) and backlit glass panels reinforce the sense of breathability, while the luminous glass walls decorated by photographic decals hint at The Hague’s urban landscape.

As cyclists ride past the luminous cityscape, it unfolds almost like a skyline in the background. At a walking pace, details of individual buildings come to the fore, emphasizing a connection to the urban milieu above.

“The integrated application of light and spatial identity makes the facility appear more spacious,” says Rene Toneman, Creative Director at Silo. “Moreover, the visual interventions supports the intuitive orientation, making it easier to find back your bike at the end of the day.”

With room for 8,000 bicycles, it’s one of the largest bike parking facilities in the world, dwarfed only by the 12,500 spaces at Utrecht’s striking central station. Like its larger counterpart, The Hague’s new cycling hub elevates bike storage into an experiential showpiece. In short, the Dutch do it differently — and better.

In a country where the bicycle is a central pillar of urban transportation, facilities like The Hague’s central station are as vital to daily life as the railway terminals they often accompany. But they goes far beyond the utilitarian. Even underground, something as banal as a parking garage can also be a playful — and beautiful — part of the urban tapestry.

In The Hague, Silo and Studio Marsman introduce bold graphics and a museum-like ambience to a subterranean parking complex.