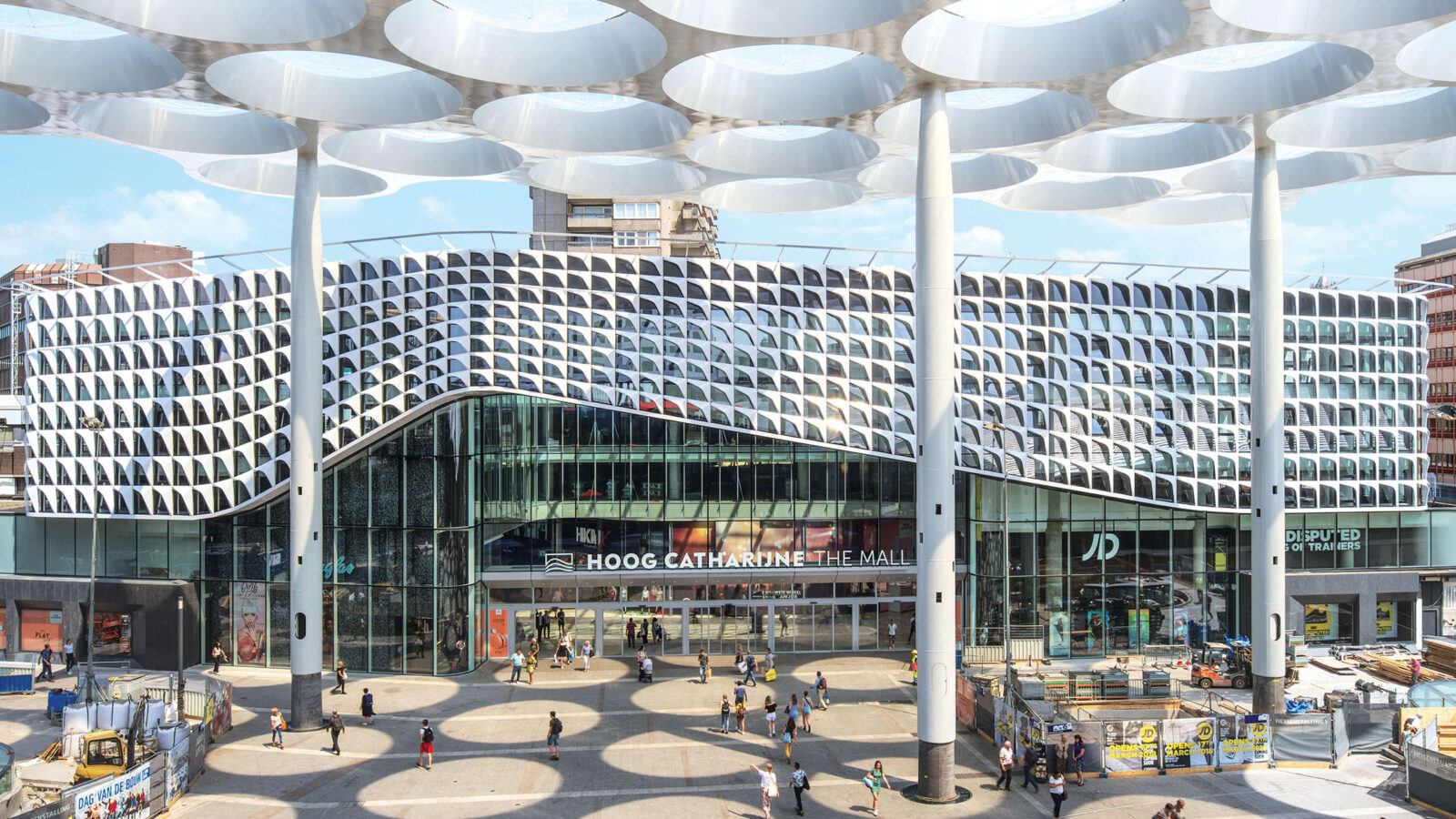 In the Netherlands, the bicycle reigns supreme, thanks to the country’s extensive networks of paths and parking garages designated for bikes. But when cyclists get to those lots, they often have to walk their rides up and down a series of ramps before finding an available spot.

In Utrecht, the Rotterdam-based practice Ector Hoogstad Architecten has created an alternative to this slow and taxing process. The cycling crown jewel in the proudly bike-friendly city, which boasts 335 kilometres of dedicated routes, is a three-tier parking structure beneath the elevated pedestrian square, or Stationsplein, at Utrecht Central Station. Punctuated by a monumental skylight-studded canopy that soars above the square, the garage is a triumph of urban infrastructure that revolves around safety, speed and convenience. The awning is held up by cast-in-place concrete columns, three of which extend down to support the three levels of indoor parking and widen gradually to take on a trumpet shape; cyclists zip around and zoom past their five-metre-diameter bases. “At the square level, the canopy’s columns are surrounded by glass flooring,” the architects explain. “This results in a stronger visual connection between the two realms, more daylight into the parking garage and the opportunity to experience the columns’ full length from the inside.”

The parking structure is dedicated to the city’s 125,000 daily cyclists. It contains a world record–setting number of bicycle parking spaces to choose from: 12,500, to be exact. Most important, the architects designed a safe and speedy route to access each one. To coordinate the high influx of users at peak times, the firm developed a spatial and circulation plan that separates bicycle traffic by direction and enables unobstructed access to the rows of parking spaces at the building’s centre.

A red bicycle path runs between the train station and shopping mall – leading directly into the parking structure, serving as a continuation of the city’s path network and ensuring the east-west connection remains uninterrupted through the building. Cyclists follow the red route without slowing or stopping as it wraps all three storeys, enjoying easy access to rows of two-tiered storage. Digital counters provide the exact number of available spaces in the top and bottom racks. Complementing this engineered efficiency, the material palette of concrete, steel and chemically treated wood help fulfill the architects’ desire to “create an atmosphere that still feels warm and pleasant.” Windows and openings between the parallel bike lanes create transparency across the interior, offering glimpses of fellow commuters riding along sloping paths on the various levels. 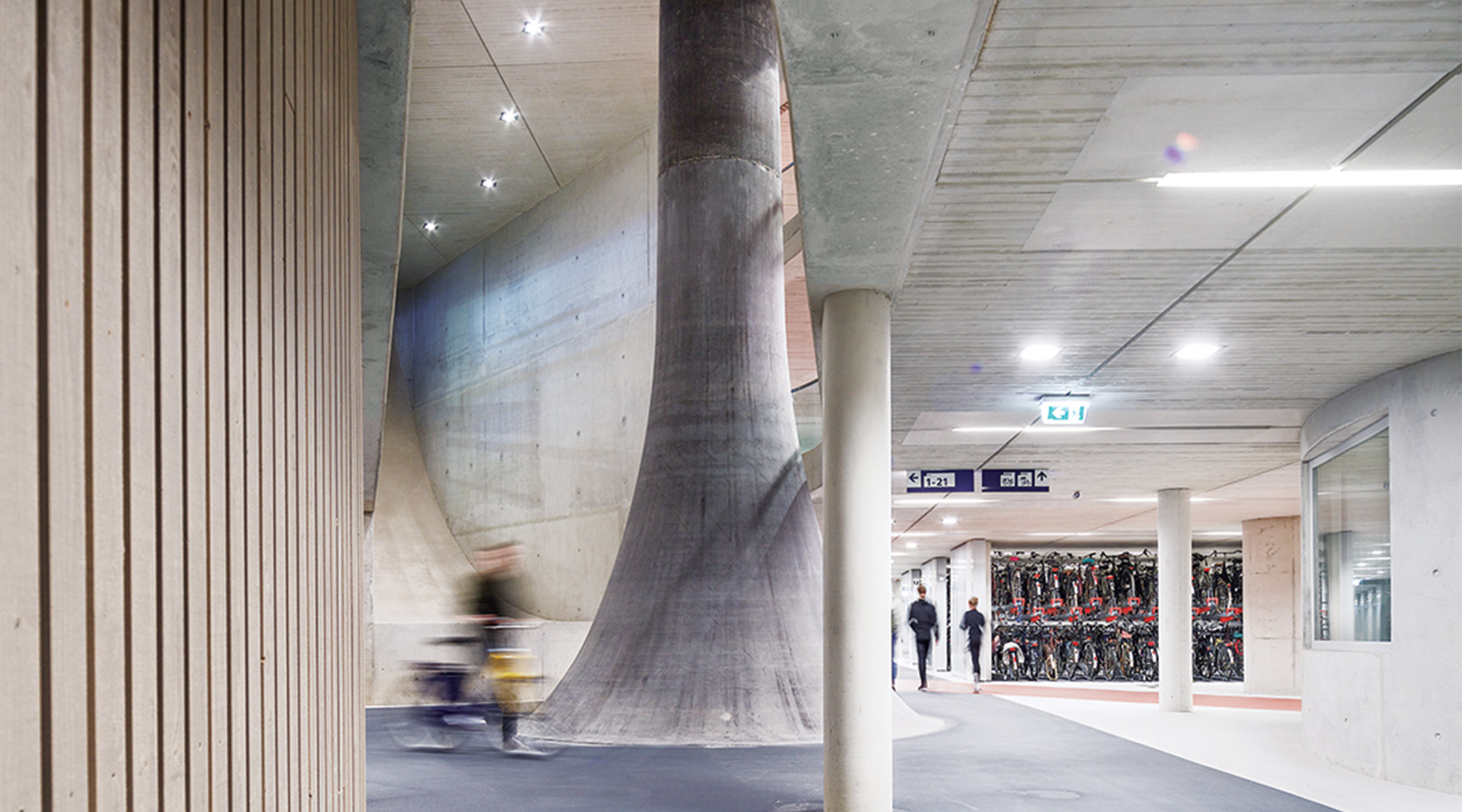 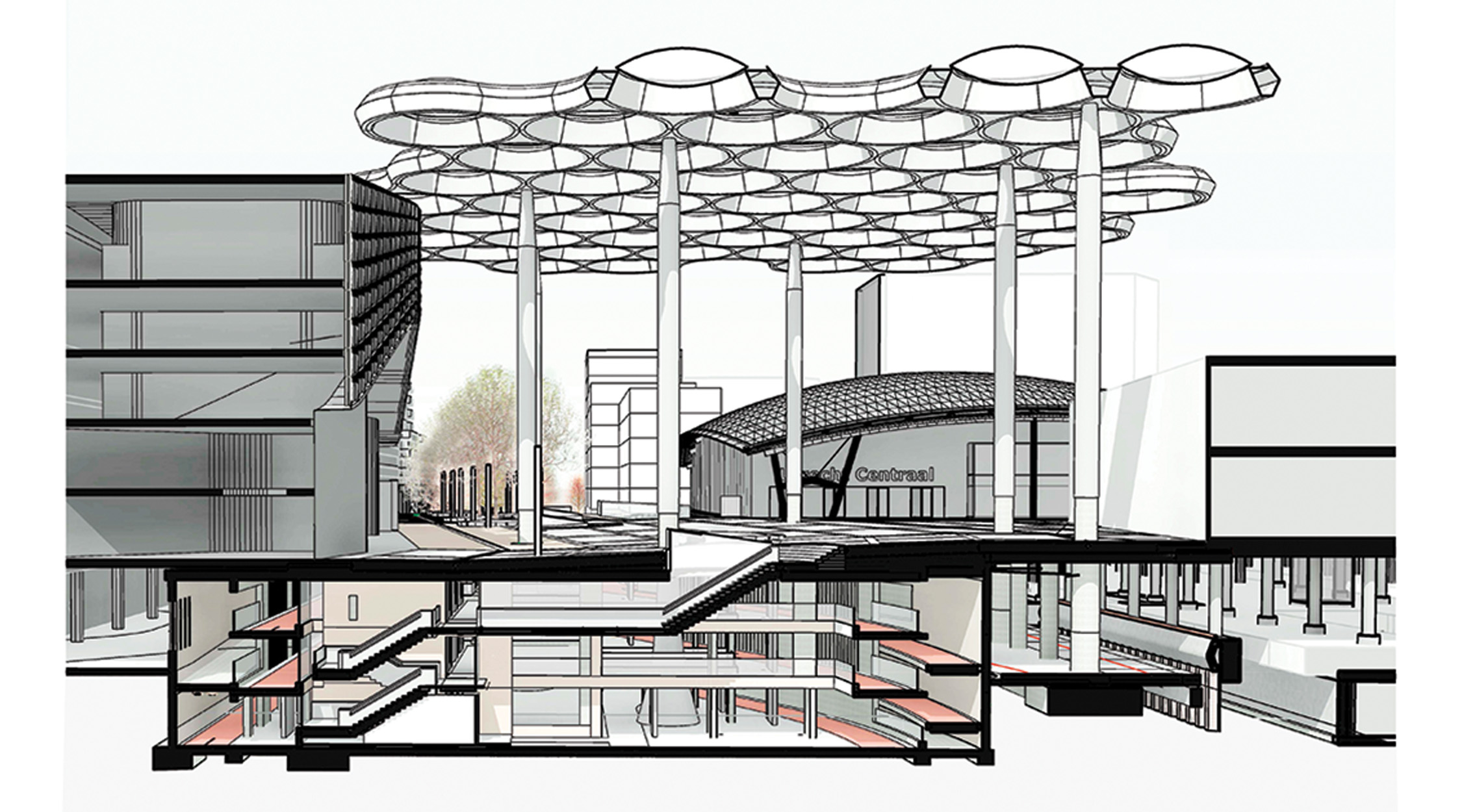 Once off their bikes, cyclists can follow the grey pedestrian paths to Utrecht Central Station’s train platforms (reached via a subterranean passage) or ascend a light-filled stairway to the station’s glass dome in the pedestrian square above. In this way, the garage is an integral piece of infrastructure embedded directly into Utrecht’s very fabric – one that connects cyclists to their city in a fundamental way.