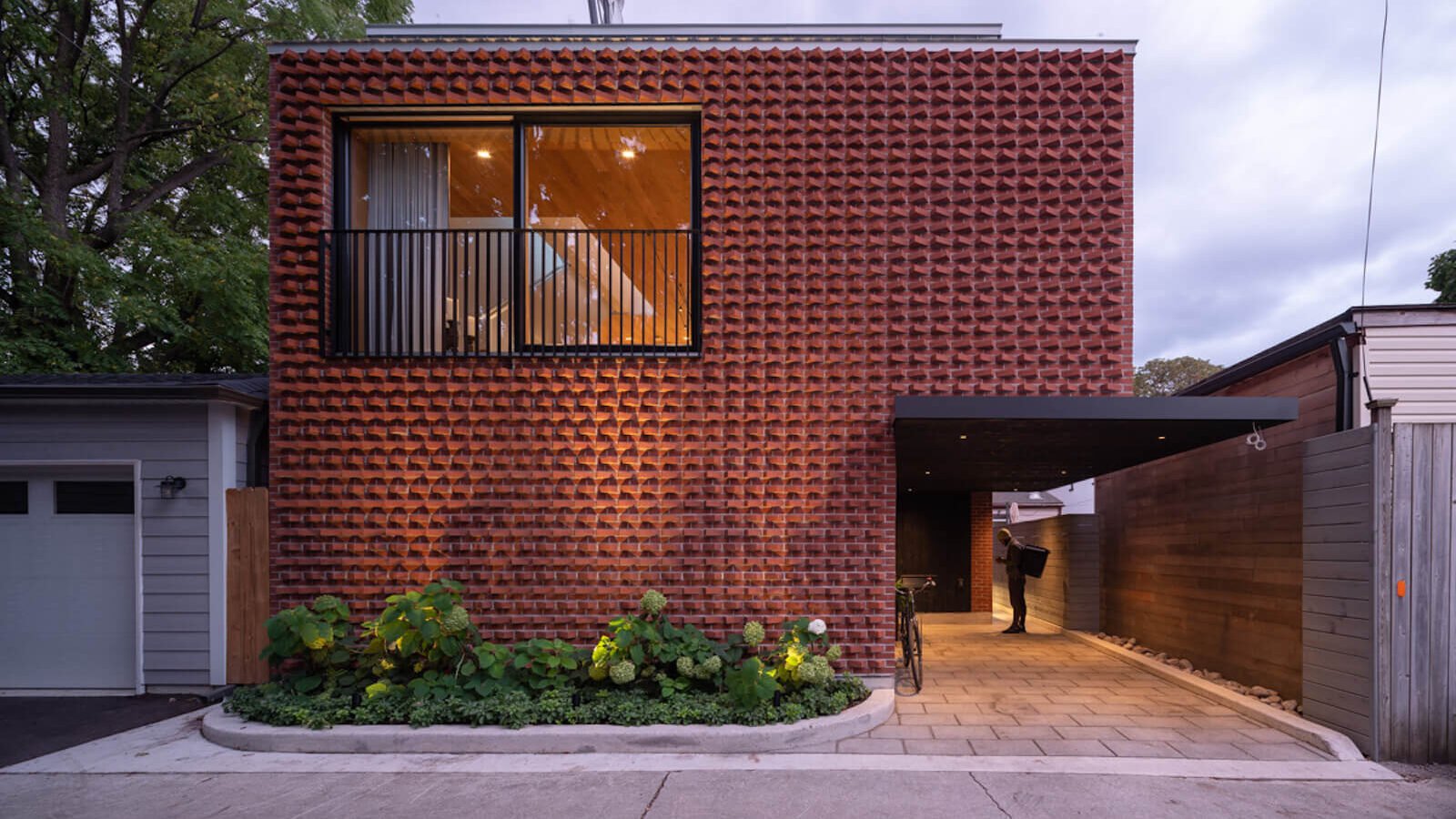 A Toronto Laneway House Perfectly Fits a Family of Five

Williamson Williamson weaves magic into the city fabric with a Toronto laneway house in a bold red brick.

Prefab has emerged as a popular solution for building in laneways. But Jeff and Suzanne Wilkinson had set their sights on a tailor-made home. After all, they’re not your typical clients: Suzanne, an interior designer, is a principal at Toronto firm Figure3, and Jeff, who runs a construction management business that builds mid-rises all over the city, has long been fascinated by the possibilities of urban densification afforded by laneway houses. Yet they had no desire to take on the design of the project; they hired Betsy Williamson, principal of the Toronto architecture practice Williamson Williamson. “They wanted someone to drive a vision that allowed them to participate in the process,” says Williamson. 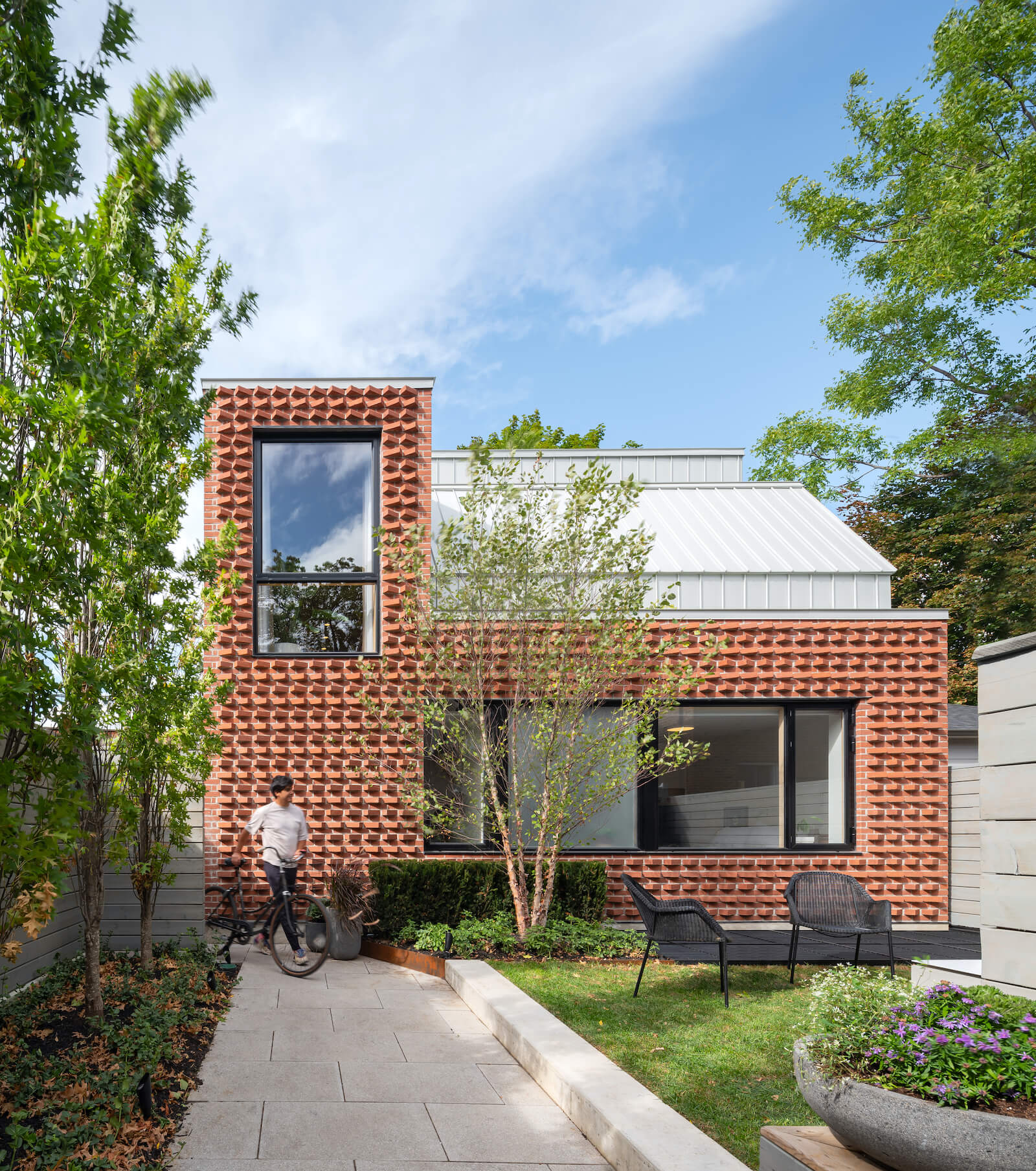 An expressive dormer looks onto the courtyard between the laneway house and the pre-existing home. The first-floor bedrooms have generous access to this outdoor space through glazing.

With its expressive dormer window tower, the new laneway house in Toronto by Williamson Williamson peeks out like an architectural curiosity from behind an existing house in Roncesvalles that the couple bought four years ago. They had initially intended to demolish and rebuild the main residence for their forever home and build an auxiliary structure at its rear as an income property. But they felt the laneway home was a beautiful solution for a custom abode — that house, they decided, would become their primary residence.

It allowed them to create something both modern and homey. “I wanted a classic red brick house,” says Suzanne, “but in a contemporary expression.” The home’s two main facades, which look onto the laneway and the back of the original house, are clad in an alternating pattern of offset bricks. Williamson’s firm is known for its unyielding precision and meticulous drawing packages, and she ensured that every module was turned to the inch so that the mason could easily realize her vision. 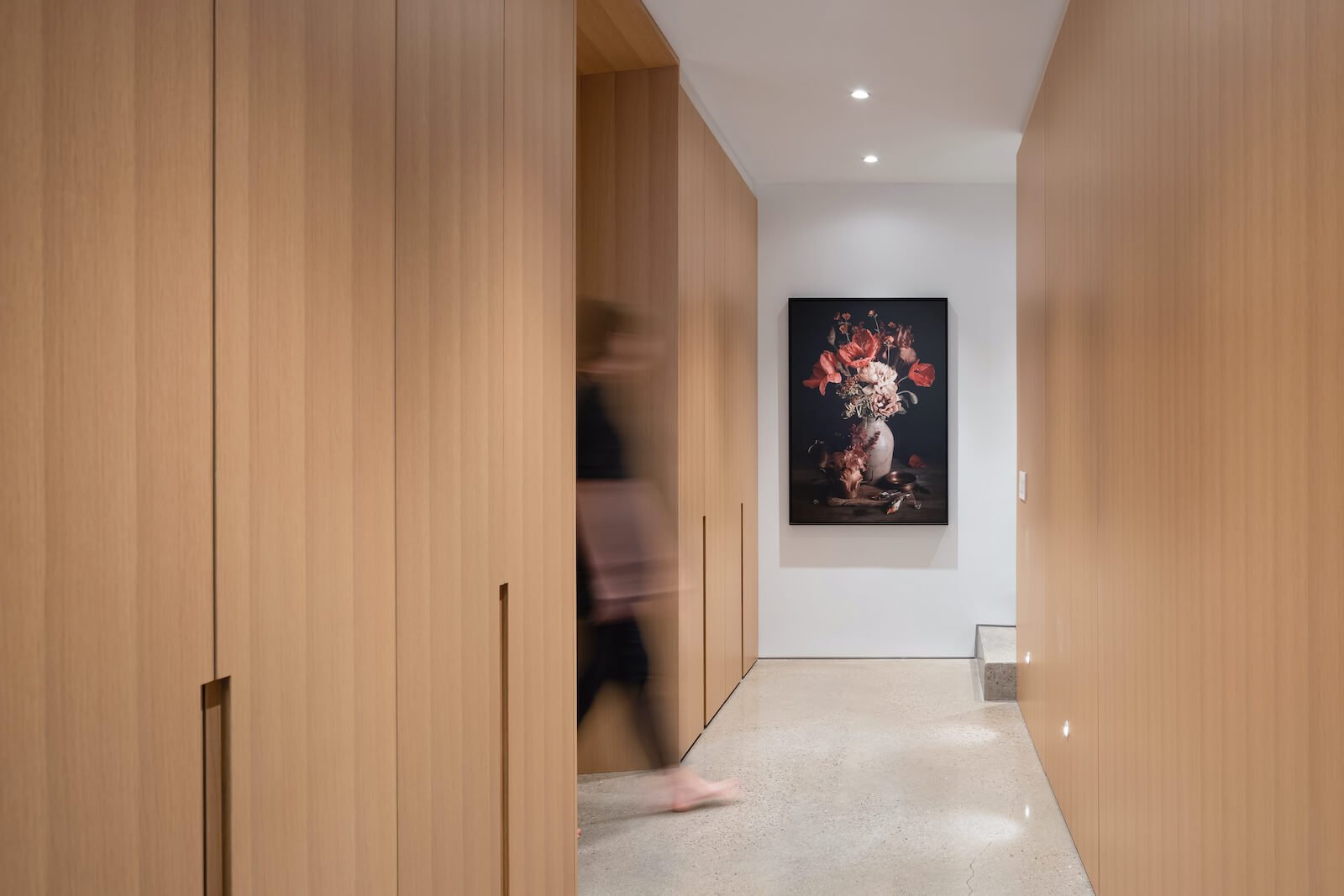 The main bedroom is situated in the basement and features a span of white oak millwork. 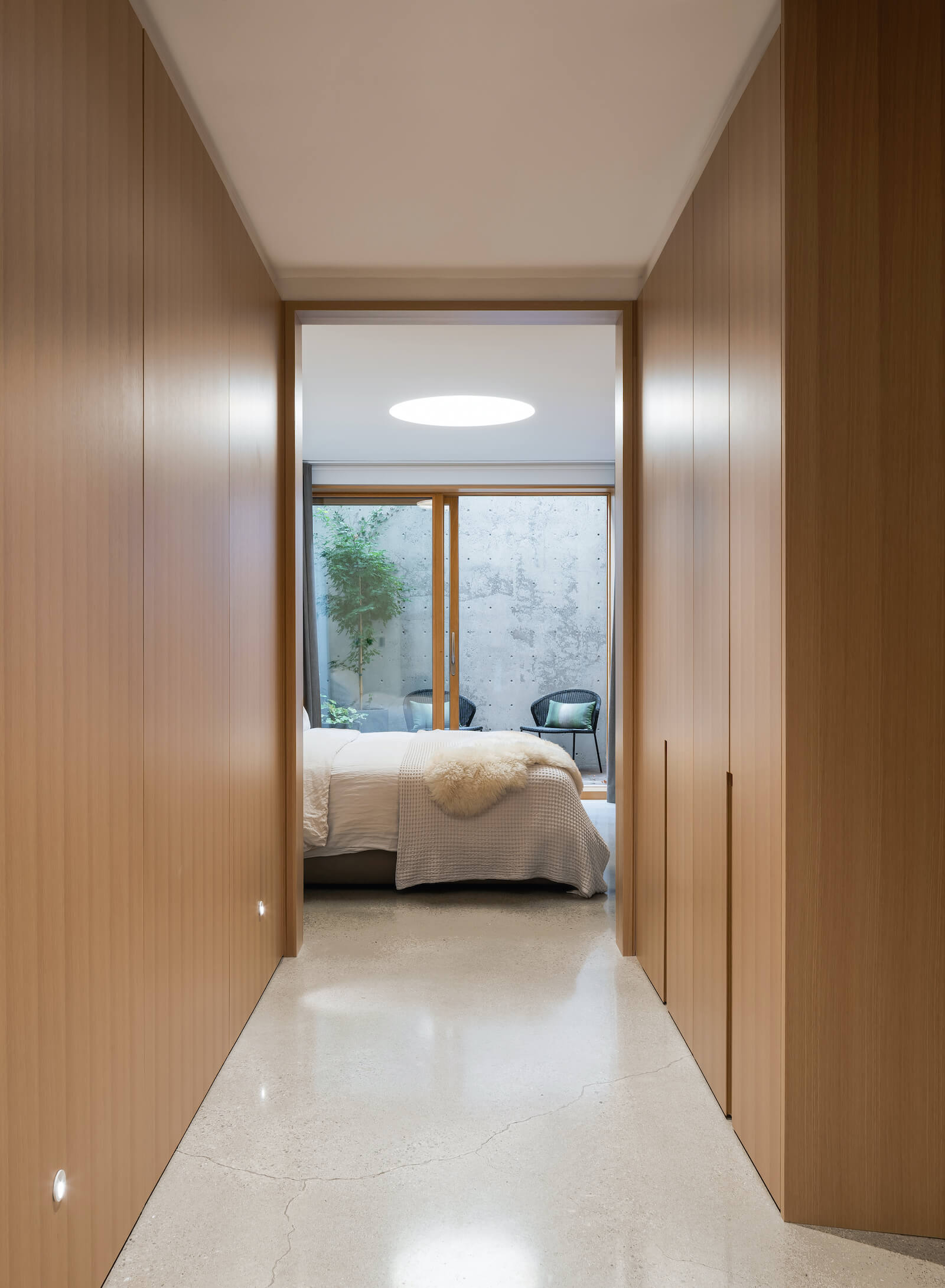 This seemingly odd move that actually allowed the architects and clients to devise a spa-like ambience for the space. Sliding glass doors lead out to a plant-filled light well. 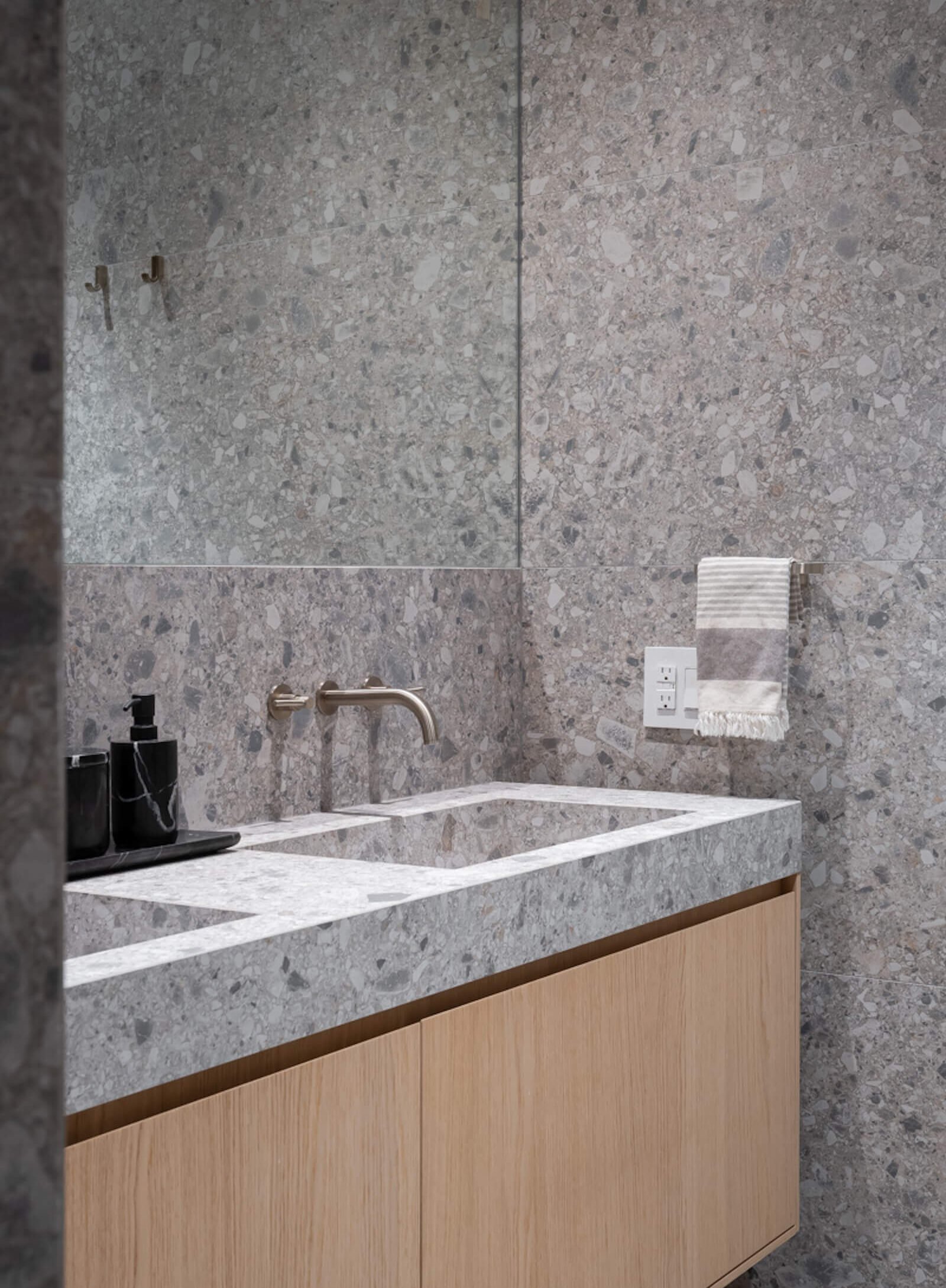 “It was very important that the laneway side reads as a front elevation; the decorative brick on the front and back of the house signify that they are primary facades,” explains Williamson. Also to this end, Williamson tucked the entrance into the side of the house, under a blackened wood canopy that shelters a parking spot.

The brick gives the envelope an expressive tactility that makes the home a formal marvel. While Williamson was able to animate its typical boxy shape, there wasn’t much else to do volumetrically. Working within the nascent typology’s boundaries, where minutiae like window positions come under the scrutiny of zoning enforcers and most major banks are unwilling to provide financing, the foremost concern was maximizing the site area that the laneway house could occupy. (Over three levels — basement, main floor and second floor — the home measures 214 square metres.) 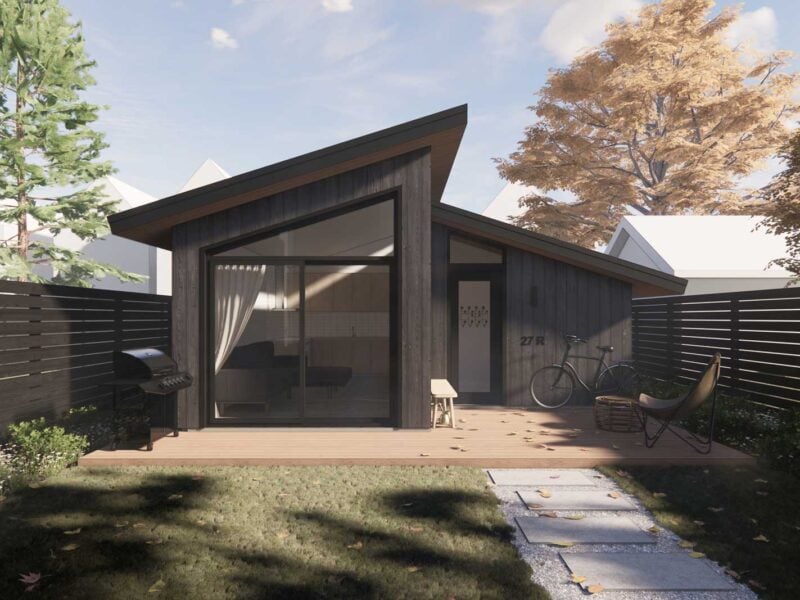 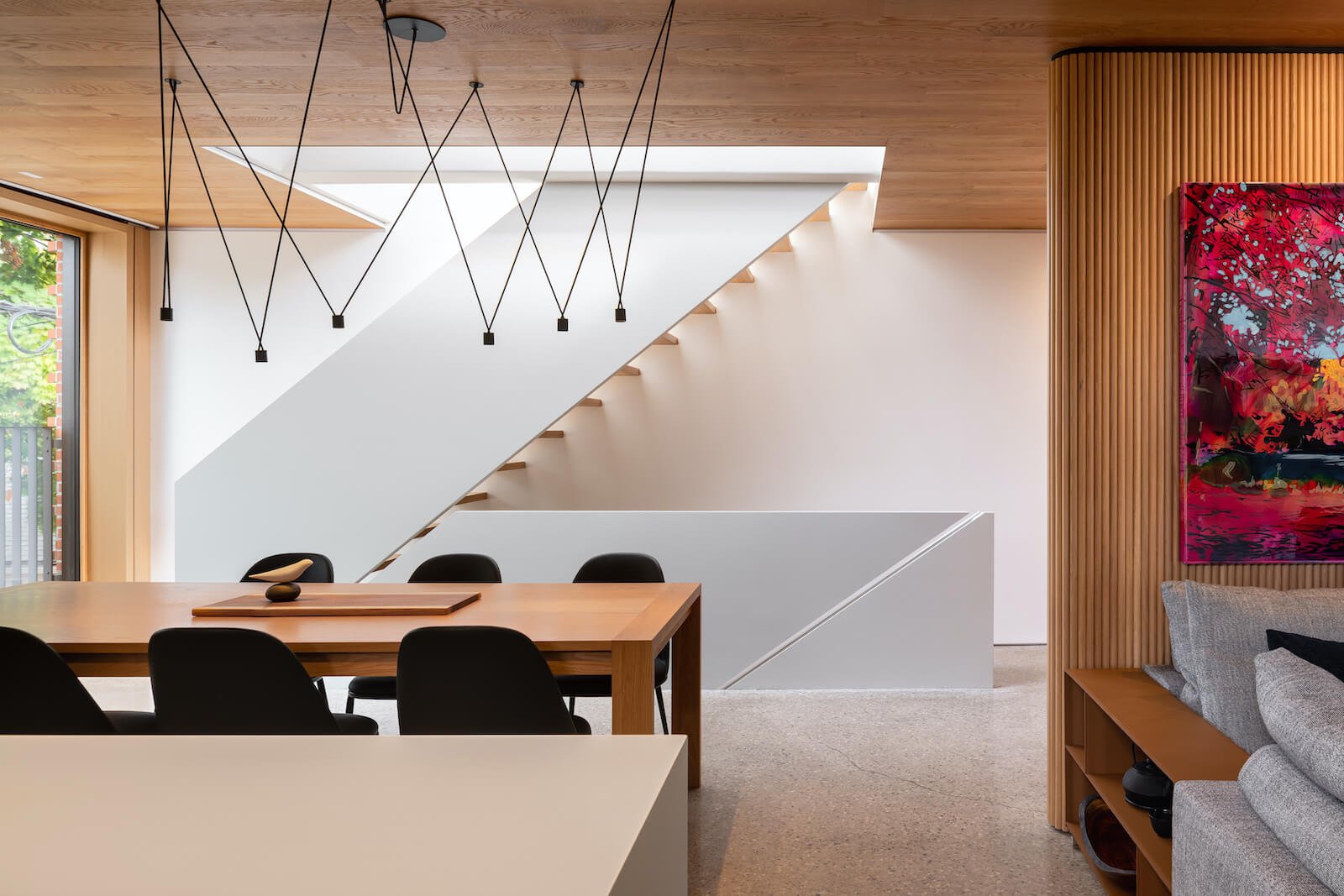 A Velux skylight bathes the sculptural staircase, made of painted millwork, in sunlight. Above the dining table, an installation of Vibia’s Match lights hangs from the oak ceiling, by Torlys.

That aim also informed the interior program: The Wilkinsons’ three sons’ rooms are on the ground level, and their own bedroom is in the basement. That might seem counterintuitive — but it works. By sinking the bedroom underground while also carving in a light well, they’ve achieved a spa-like environment with an expanse of white oak millwork and an ensuite clad in painterly grey porcelain tile — details informed by Suzanne’s impeccable taste. More importantly, by placing the bedrooms below, they were able to elevate the main living area. 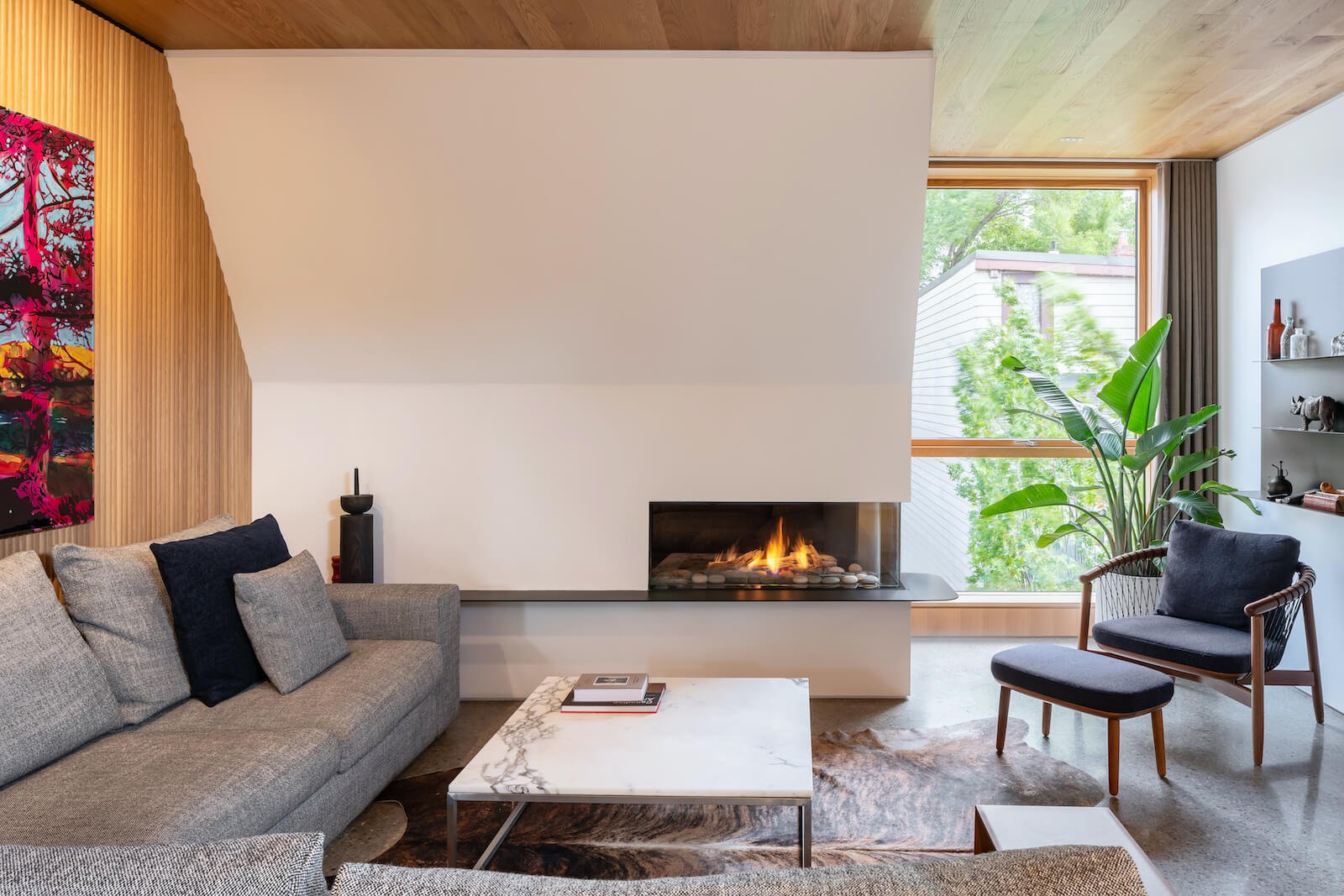 The warm hearth of the home features a Flexform sofa and Herman Miller’s Crosshatch chair.

That you ascend a staircase to reach this communal zone feels both practical and symbolic — it lifts the space above the garage-eye view of the laneway and unfurls a capacious, light-filled hearth before you. (The staircase itself is pure Williamson in its detail. Its painted millwork railing is sliced into Z-shaped planes. “It’s solid enough to develop some enclosure but lets light through,” she says.) A fluted wood wall curves to hug the living area where the white plaster fireplace surround is canted like the exterior shell of this upper level. The immaculate kitchen features a marble backsplash that seems to drip with caramel veining. 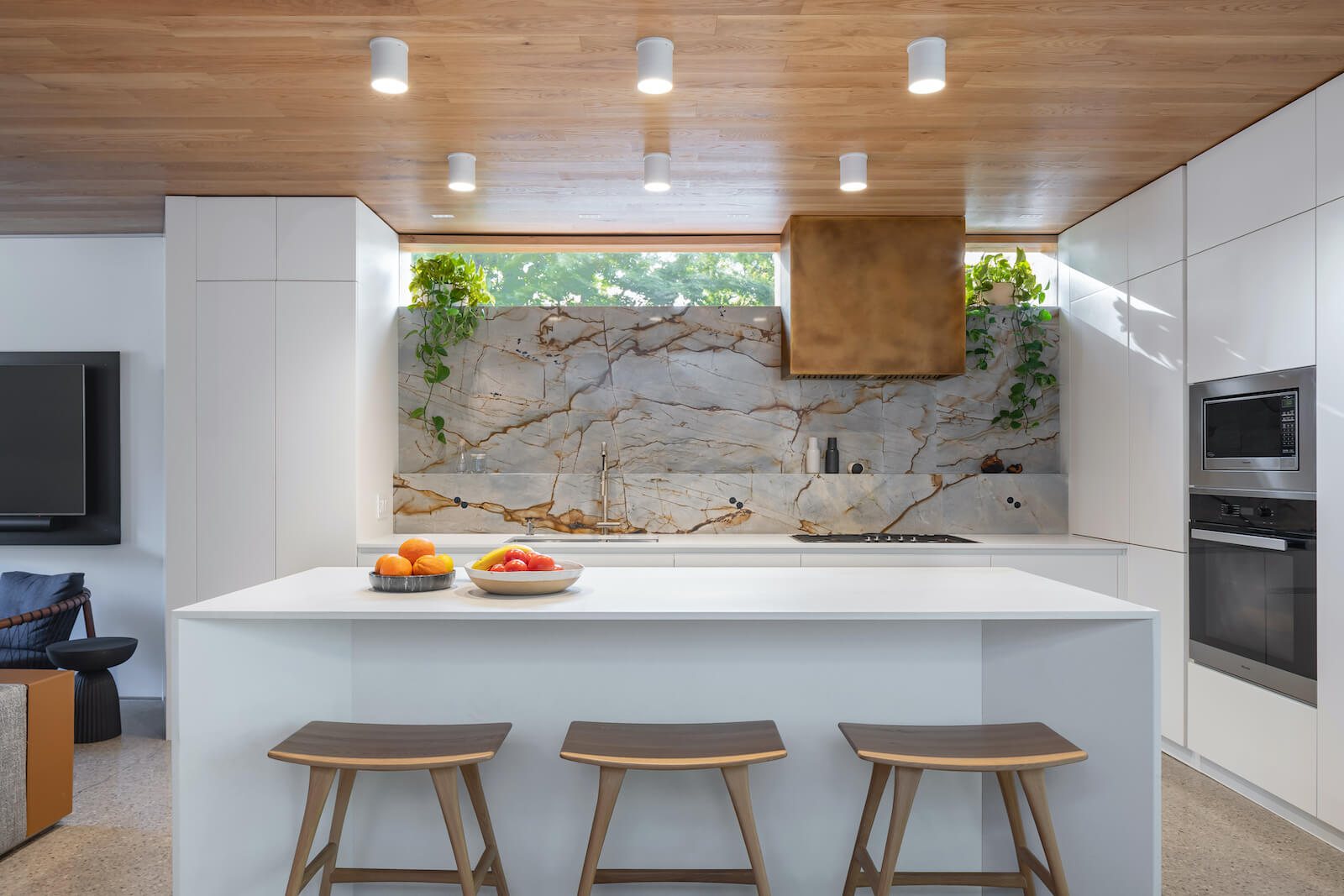 The hierarchy of spaces feels paradigmatic, as if to say, “This is how you design a laneway house.” Works by artists who live in the neighbourhood abound throughout the home, which feels both figuratively and factually built into the fabric of an ever-growing city. Laneway abodes are often touted as a way to knit more density into single-family enclaves. And the Wilkinsons’ new laneway house in Toronto by Williamson Williamson proves that it can be done without sacrificing functionality (Williamson estimates that 13 people, including tenants in the original house, could live on the same lot).

“Most laneway houses are bonus spaces, like home offices and exercise rooms for residences,” says Williamson. “This four-bedroom home shows you can actually make a livable space for a large family on a laneway on a single-family lot.” And you can do it with creativity, down to the last detail.

Williamson Williamson weaves magic into the city fabric with a Toronto laneway house in a bold red brick.