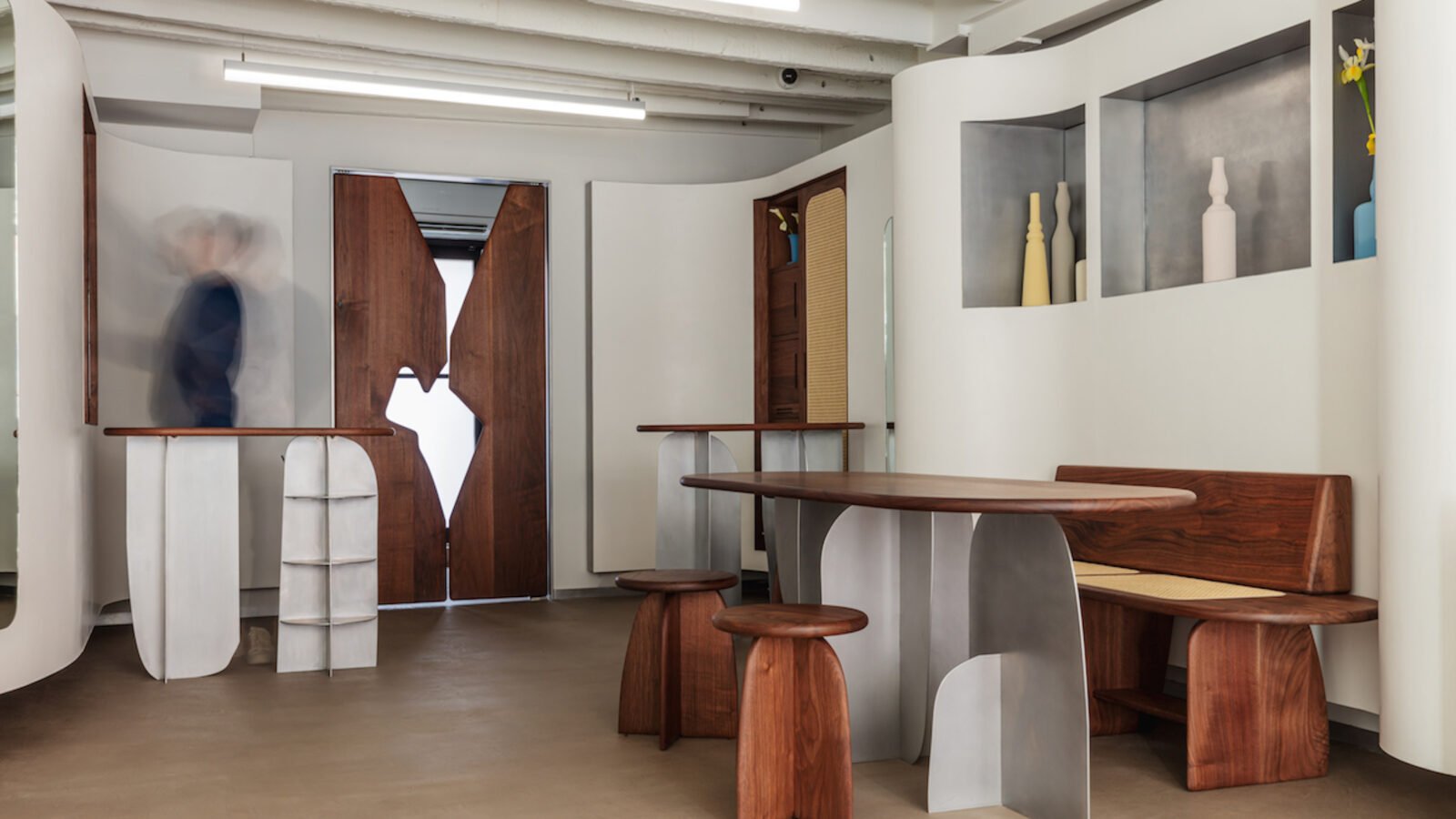 The eyewear brand’s distinct look is honoured in a one-of-a-kind retail shop.

In New York’s trendy Nolita neighbourhood, eyewear designer Ahlem Manai-Platt has opened her second shop and it’s a sight for sore eyes. The east coast flagship of Ahlem (the original location is in Los Angeles) is tucked into a 500-square-foot storefront. Designed by Brooklyn’s Shapeless Studio, the space emphasizes a feeling of timeless craft – one that reflects the award-winning brand’s detail-driven aesthetic.

As per the press release, in creating the interior the design team first sought to celebrate the history of the existing building. To do so, they crafted a floating curved wall that “reveals the original brick wall while beamed ceilings have been left exposed.”

Shapeless then used a material palette of corrugated metal, striated wood and several varieties of plaster “to create an effect that is at once geometric and grounding, understated and elegant.” The undulating plaster walls, which feature carved nooks for display shelves, lend the small space a sense of depth and weight. “We created soft, clean ribbon walls that are lifted off the floor and surround the shop, unifying and organizing the space. The finish is a fine white plaster, which adds a quiet richness.”

Integrated harmoniously with this voluptuous backdrop are the expressive millwork and furnishings designed by Shapeless – working closely with Ahlem’s team – and made by fabricator Armada NY. One of the most striking details is the carved-walnut double doors whose live edges provide a peak to the back area. In fact, it was Manai-Platt who designed the sculptural doors. She sketched them on an airplane napkin, and they were “carved by hand to ensure they had the right natural, handmade quality.”

The aesthetic language here was inspired by the works of Isamu Noguchi and Pierre Jeanneret, who happen to be Manai-Platt’s favourite designers. Tactile details – like the woven rattan used as a surface for benches and shelf panels – lend a sense of distinction. And bold moves, such as the manner in which storage is displayed – whether recessed into the ribbon-like walls or suspended from them – provide a dose of drama.

The furniture walks the line between elegant and eccentric. For instance, the aluminum legs of the tables and stools were treated like a quirky focal point: “To get the shapes of the legs just right — playful but not goofy — we drew them by hand, scanned them, and traced them digitally,” says the Shapeless team.

There is much to admire here. Unfortunately, the shop opened in late February, just as coronavirus was rearing its head. Manai-Platt has temporarily closed both locations – but the online store is still open.

The eyewear brand’s distinct look is honoured in a one-of-a-kind retail shop.